Nestled in the unbounded beauty of Napa Valley is ‘Villa Montana’, the 500-acre Italianate home to 49ers legend Joe Montana that hit the market Wednesday for $28.9 million.

The sprawling home was originally listed in 2009 for an ironic $49 million, but was taken off the market by the Montanas.

This property is separate from a second Calistoga ranch in the Bay Area that is currently being sold for $3.1 million

The expansive villa was built in 2003 in the heart of Wine Country, bordering Sonoma and Napa Valleys.

It overlooks a stunning landscape, surrounded by rolling hills and reaching oak trees. 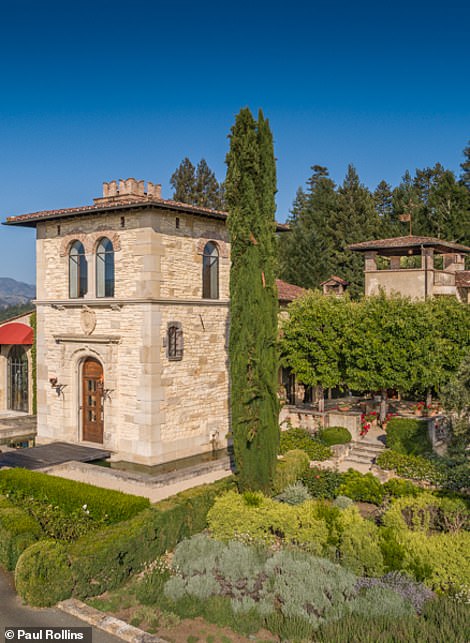 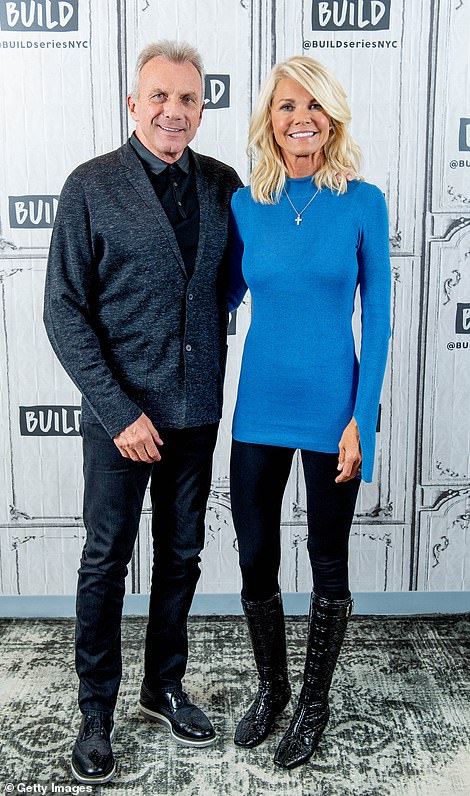 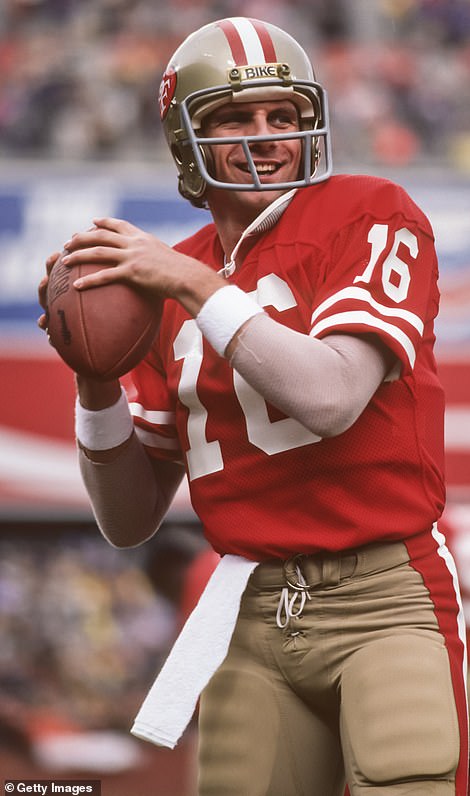 ‘When you’re at the top of the property, you’re looking dead straight on at Mount St. Helena and Knights Valley,’ Compass agent Avram Goldman, who is co-listing the home with Tim Hayden, told SFGate.

‘It’s one of the most spectacular views in wine country. In the winter, when it does snow, it’s incredibly picturesque. It’s like a fantasy world,’ Goldman says.

The Montana’s fell in love with European architecture while vacationing in Italy and France during Joe’s breaks from the NFL. 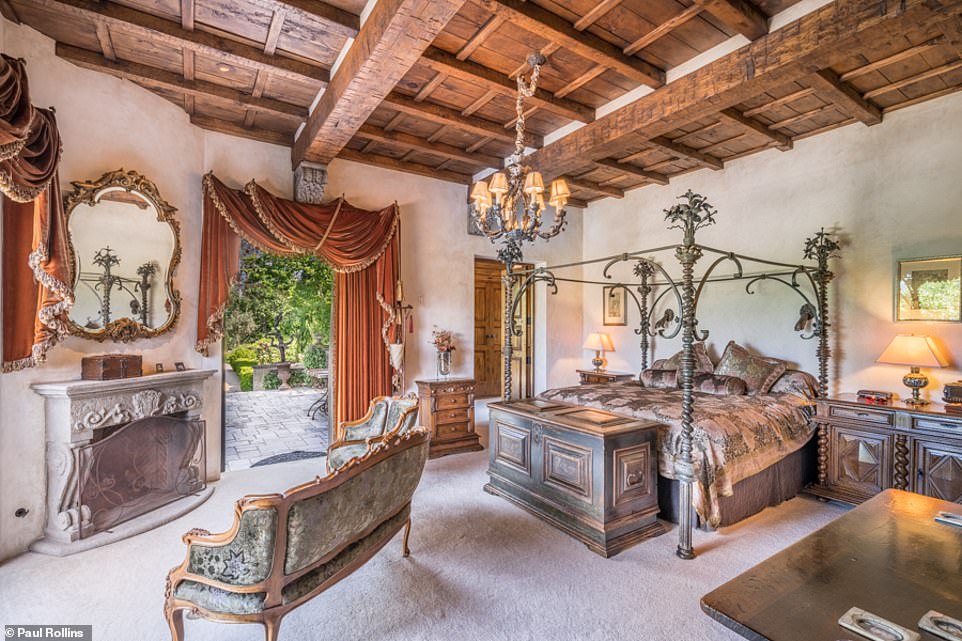 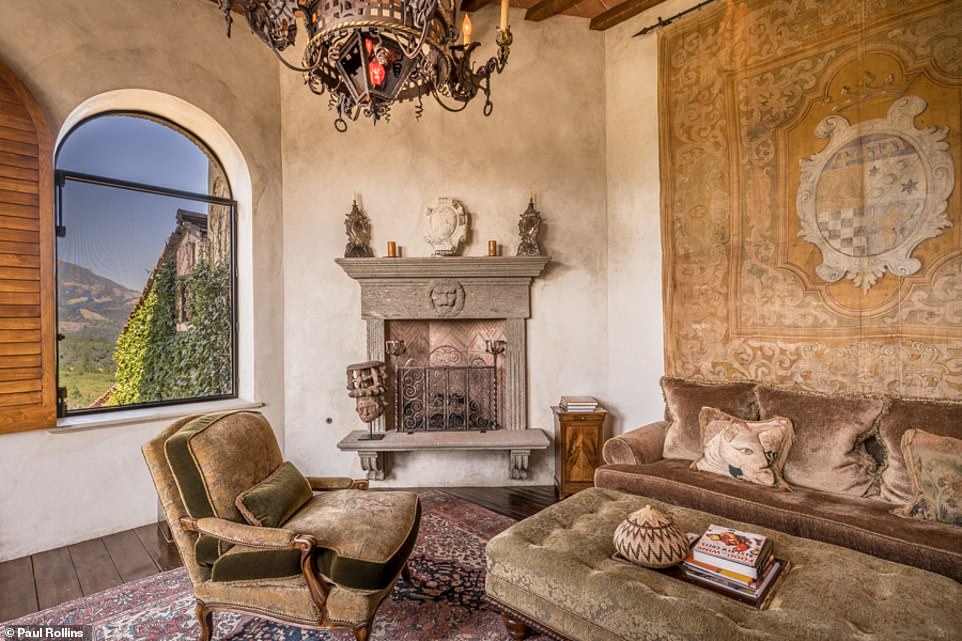 Goldman: I compare their property to a spectacular painting whether it be a Picasso or a Monet. They wanted it to have an authentic feel of an Italian villa

Villa Montana contains the main home, a guest house, a caretaker’s cottage and an equestrian arena among other amenities.

Goldman says, ‘I compare their property to a spectacular painting whether it be a Picasso or a Monet. They wanted it to have an authentic feel of an Italian villa. They really created that.’

Inspired, the Montana’s imported furniture, adornments and statuary to create their own piece of Europe in their  home. 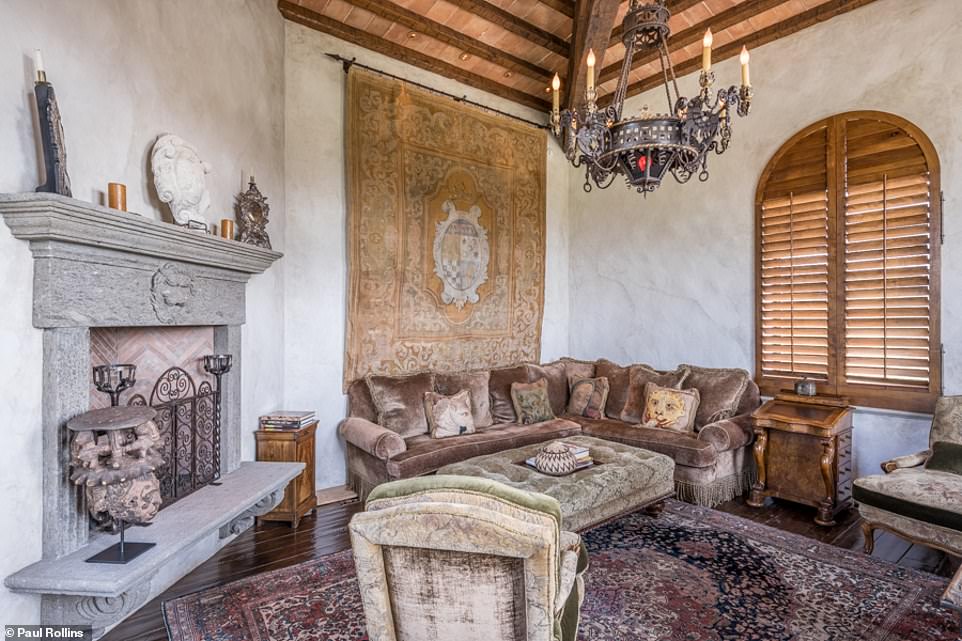 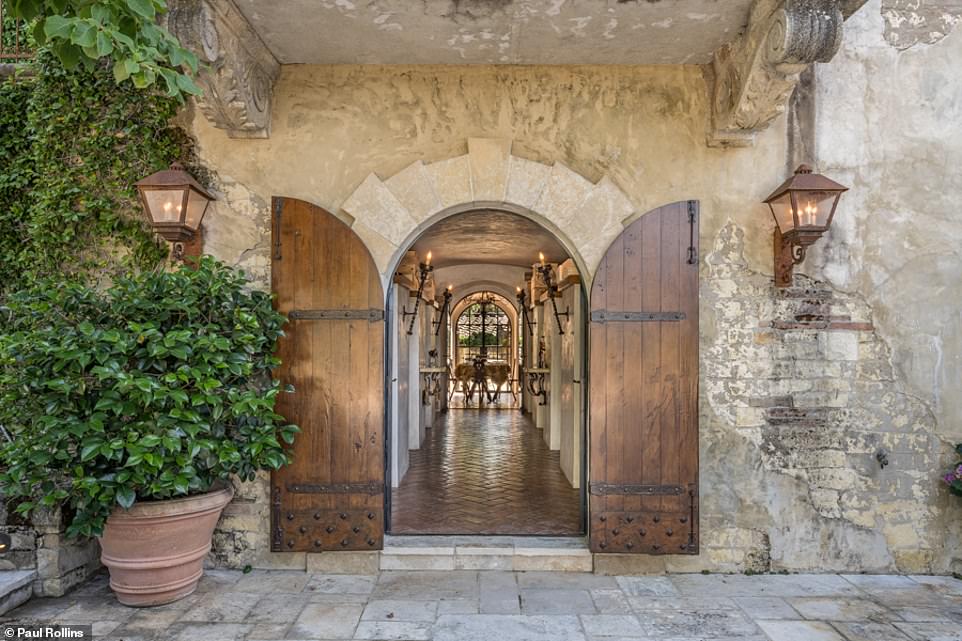 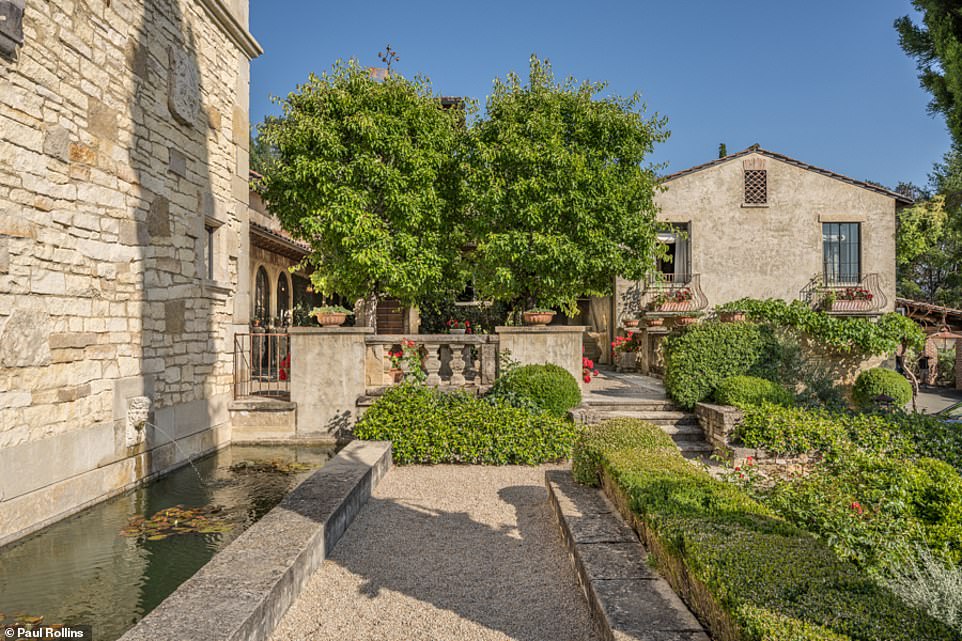 The Montana’s installed an equestrian arena, a skeet shooting range and a outdoor kitchen among other outdoor features 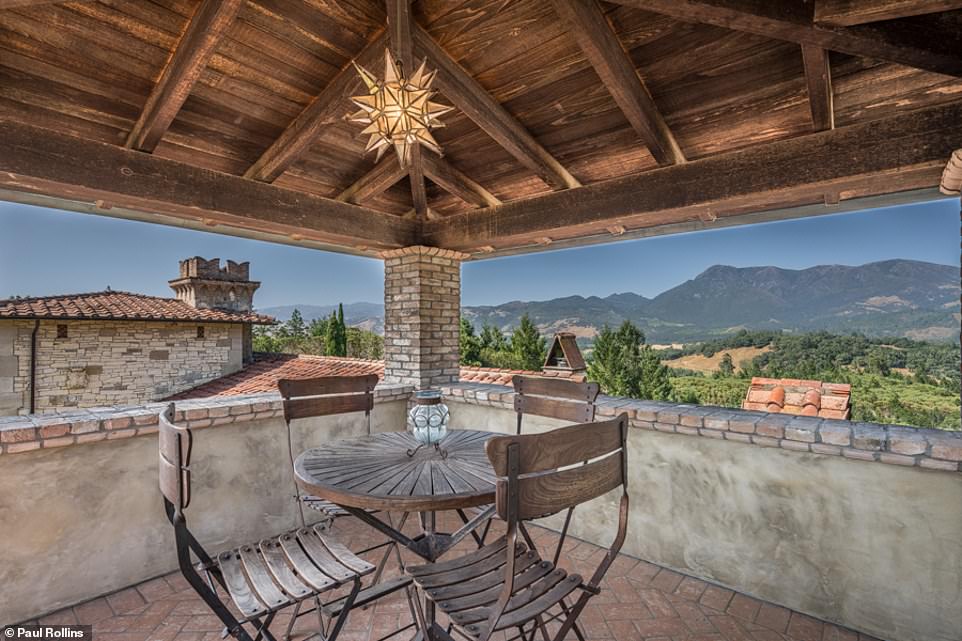 The home overlooks the breathtaking scenery of Wine Country and shows a 360-degree of Mount St. Helena

Villa Montana has three bedrooms with three ensuite bathrooms, as well as a guest powder room that spans 9,700 square ft. The home’s entrance is lined with a 17th century wall and crosses a bridge atop a moat.

Within the elaborate villa’s walls, the wood ceilings are vaulted and turreted towers allow homeowners to get a 360-degree panorama of Mount St. Helena.

The home’s marble floors, window, sinks, doors and fireplaces are all antiques. The iron gates impressively date back to the 16th century while the church altar came from the 17th century.

‘It looks like they took a home from Italy, picked it up with a big helicopter and set it down here. You have the feeling it has been there for a long time but it has all the modern conveniences,’ says Goldman. 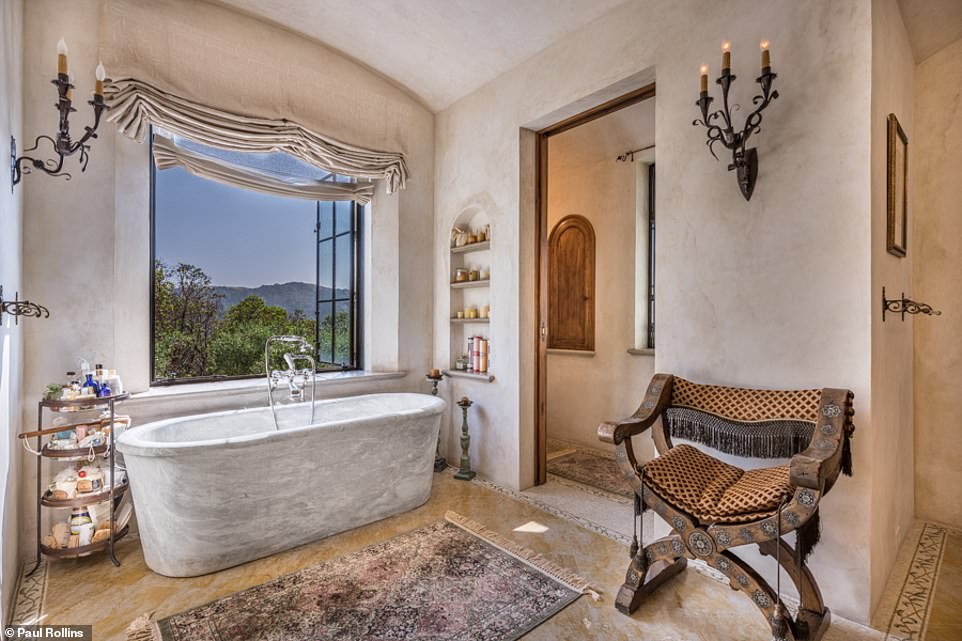 It houses a plethora of exciting outdoor features, like a basketball court that doubles as a tennis court, an outdoor kitchen with a pizza oven, a skeet shooting range, a pond, an equestrian arena and a bocce court.

The Montana’s keep with the tone of Wine Country by owning a wine cellar capable of holding 3,500 bottles and storing 30 to 60 gallons of olive oil. 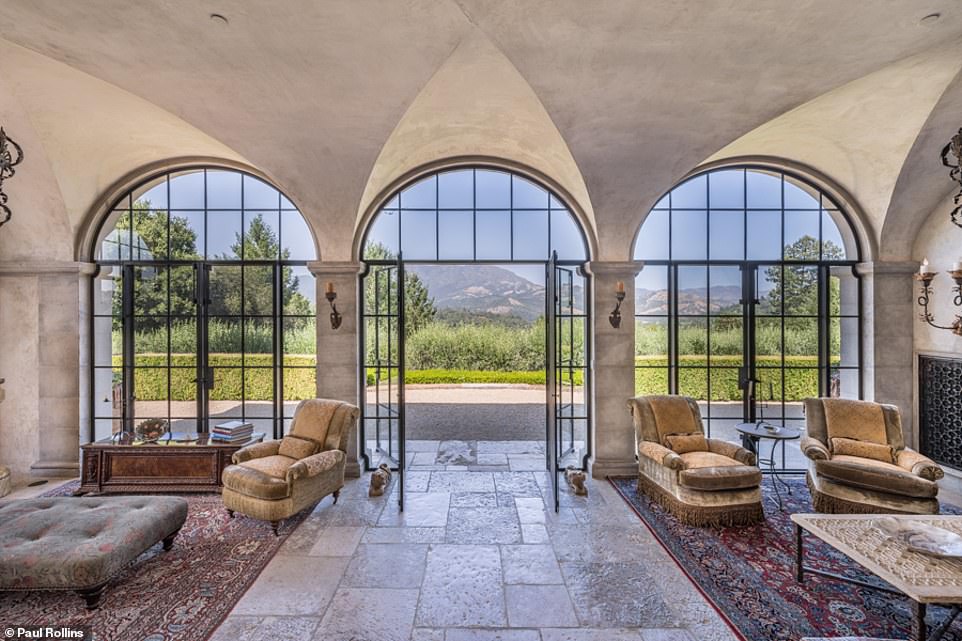 Goldman: ‘When you’re at the top of the property, you’re looking dead straight on at Mount St. Helena and Knights Valley’ 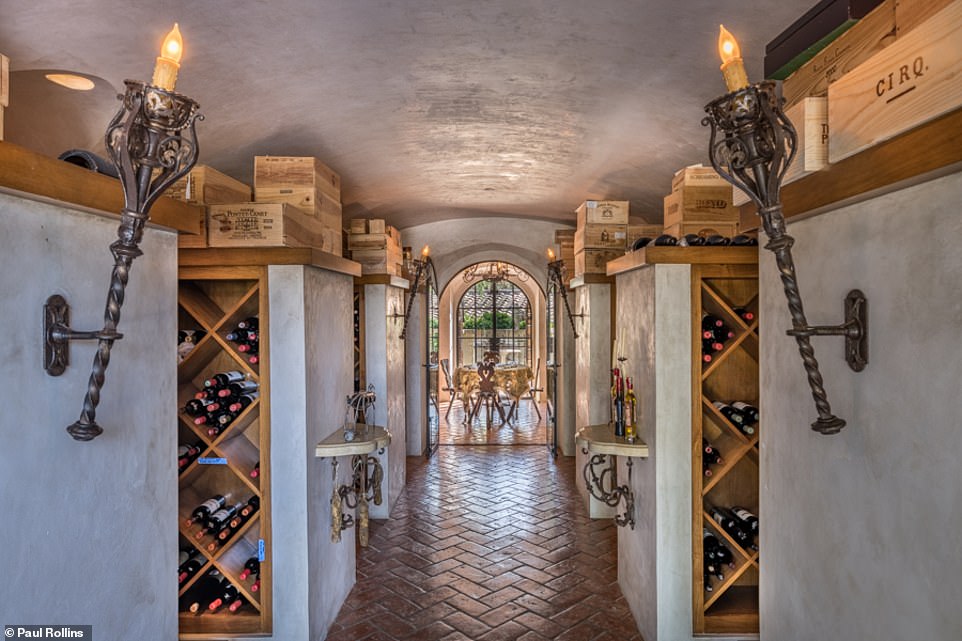 The property has a wine cellar capable of holding 3,500 bottles and storing 30 to 60 gallons of olive oil

Homeowners can pick their own wine grapes outside on the terrace, where vines weave white table grapes, and then head into the indoor tasting room for a snack.

The Montana’s are selling the Wine Country property after their children are starting careers away from the North Bay area.