Joe Rogan is facing backlash after a resurfaced video showed his laughing as fellow comedian Joey ‘Coco’ Diaz spoke about coercing women into performing oral sex to get stage time.

The disturbing footage was shared to Twitter as part of a larger thread on sexual harassment in the Los Angeles comedy community after actor Chris D’elia was accused of sexual misconduct with underage girls.

‘LA comedy scene is full of creeps. Chris D’elia isn’t the first and he isn’t gonna be the last. LA comics have dirt on each other and that’s why they are always afraid to call one another out,’ they wrote.

‘Joe Rogan knows about most of it and still gives them a huge platform.’

In a 2011 episode of his podcast The Joe Rogan Experience, the 52-year-old can laughing as Diaz, 57, boasted about using his influence to coerce women.

‘I’ll make a call for you. That’s the f****** gateway into Hollywood, everybody knows that.’

Rogan then asks ‘How many girls did you have do that?’ to which Diaz replies ’20.’

The answer sends Rogan doubling over in laughter and clap his hands.

Diaz continued to say he had ‘this little blonde open mic chick’ perform oral sex on him before she performed her sets.

‘She finally freaked out when she got to Hollywood…She was beautiful and when she left she had dirty f****** nails.’

Diaz added that a year later the woman wrote him a letter alleging that he ‘broke her.’

Both Diaz and Rogan cackle as the footage continues to show disturbing revelations.

The podcast’s then-co-producer, Brian Redban, remained silent throughout the clip.

Rogan was swiftly lambasted online as the concerning footage was shared more than 11,700 times and amassed 3.4 million views as of Saturday afternoon. 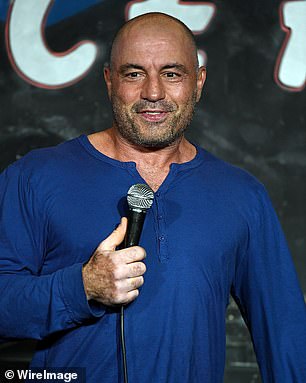 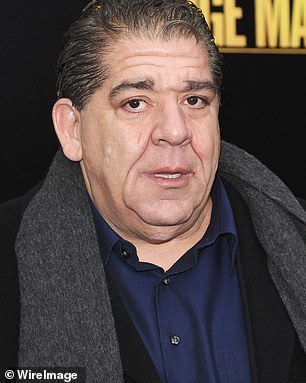 Rogan (center) busted out laughing when he asked Diaz (left) ‘How many girls did you have do that?’ to which Diaz replies ’20’

‘Chris D’Elia is not the first awful creep and he won’t be the last while we laugh along and pretend this is OK. Women belong in comedy as comedians and fans and don’t deserve to be preyed upon,’ she wrote on Twitter.

Author Catherynne M. Valente struck out against both men in a tweet where she questioned how much influence Rogan is allowed to wield.

‘And Joe Rogan laughs his ass off when the guy says he’s done it to at least 20 women. Rogan doesn’t have one word to say against this,’ she wrote.

‘It’s hilarious to him. Ha ha you raped so many ladies! And you want to tell me this man should be part of our political discourse.’

Rogan has increasingly come into the public eye over his controversial declarations against wearing face masks and other pandemic guidelines.

Comedian and scriptwriter Melanie Bracewall said the footage made her ‘physically sick’, as well as suggested Rogan and Diaz were ‘creep{s]’ 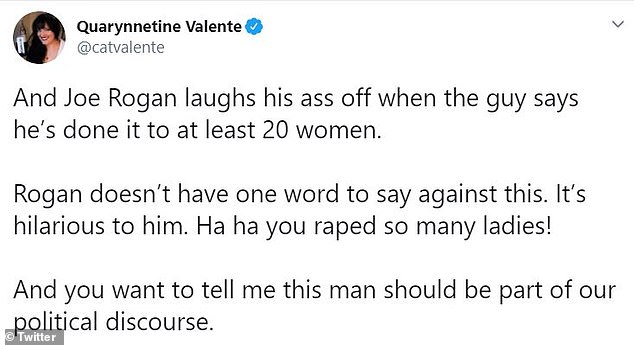 Valente: ‘It’s hilarious to him. Ha ha you raped so many ladies! And you want to tell me this man should be part of our political discourse’

‘I have had the unpleasant experience of working with Rogan. Once, and NEVER again.’

Neither Rogan nor his representatives have commented on the clip, but Diaz appeared to revel in the backlash.

In reply to a tweet defending him, Diaz replied ‘Good Morning C***suckers.’

He also used the opportunity to share other interview clips, including one titled ‘Joey Diaz Sleeps With One-Legged Woman.’ 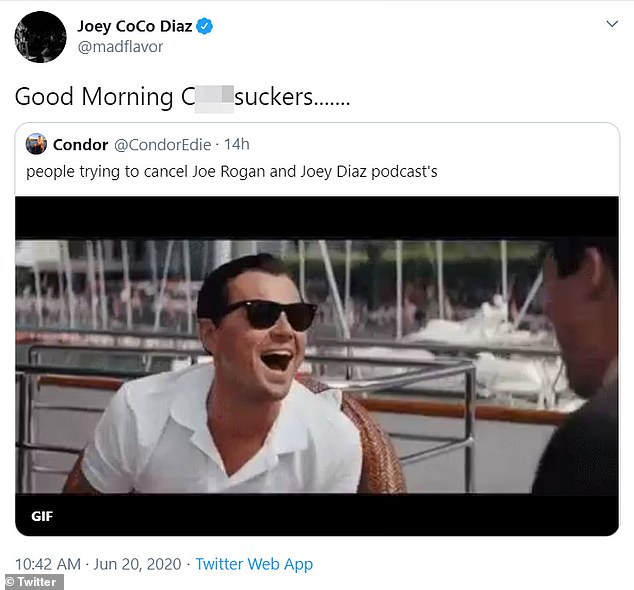 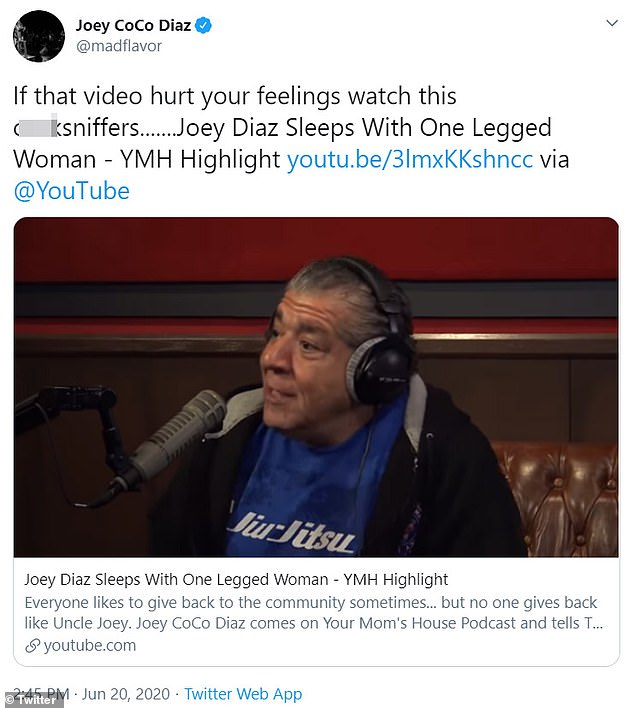 ‘If that video hurt your feelings watch this c***sniffers…….Joey Diaz Sleeps With One Legged Woman.’

Last month, Rogan made a reported $100million deal with Spotify to give the streaming giant exclusive rights to his podcast.

This makes it one of the largest deals on record for a podcast.

The move will see all 11 years worth of Rogan’s shows move to Spotify on September 1 and become exclusive to the streaming giant by the end of 2020.

Rogan’s video podcasts will no longer be available on YouTube. 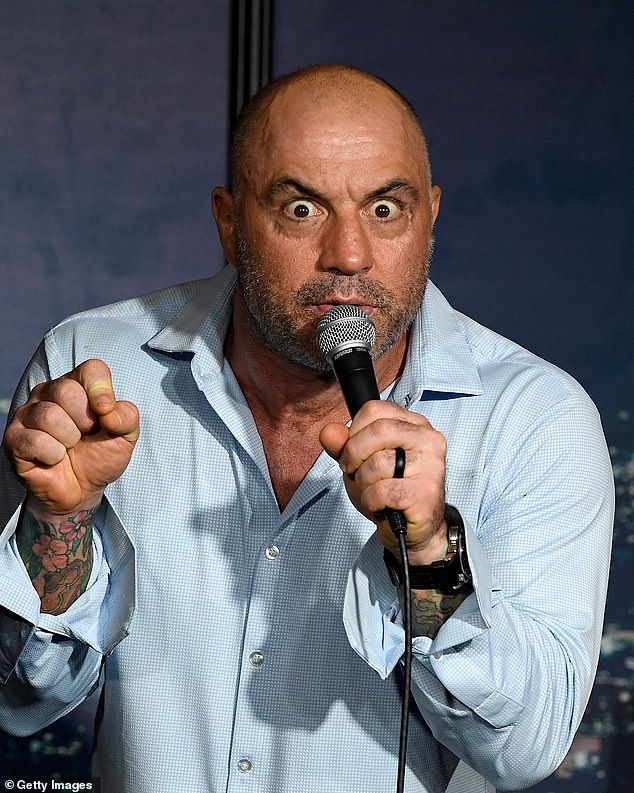 In May, Rogan signed  deal with streaming giant Spotify, reportedly worth $100million, to give them the exclusive rights to his long-running podcast series

Rogan, a comedian, TV host and mixed martial arts commentator, reassured his fans the podcast will stay the ‘exact same’ and that he will continue to have control over the show when the deal kicks in at the end of the year.

‘Starting on September 1 the podcast will be available on Spotify as well as all platforms, and then at the end of the year it will move exclusively to Spotify, including the video version,’ he wrote on Instagram.

‘It will remain FREE, and it will be the exact same show. It’s just a licensing deal, so Spotify won’t have any creative control over the show. They want me to just continue doing it the way I’m doing it right now.’

He added: ‘We will still have clips up on YouTube but full versions of the show will only be on Spotify after the end of the year.

‘I’m excited to have the support of the largest audio platform in the world and I hope you folks are there when we make the switch!’

Spotify has not addressed the video clip or the content.