England suffered the cruellest of blows in their attempt to save the first Test when Joe Root was firstly clattered on his right index finger and then dismissed off what became the last ball of the day with an inspired piece of bowling from New Zealand’s Trent Boult.

Root had battled his way to 51 and given England hope that they could pull off a second successive great escape in Auckland, with only two wickets down, until Boult got one to lift nastily and struck him on his index finger. After treatment Root decided to carry on for what was meant to be the day’s last two balls but was dismissed by the next one gloving another brute down the leg side. It will probably prove a fatal blow for England.

Root’s agony followed Mark Stoneman raising doubts about his temperament for Test cricket with a frenetic innings ended by an unforgiveable error of judgment as England suffered two huge blows in their attempt to save the first Test. 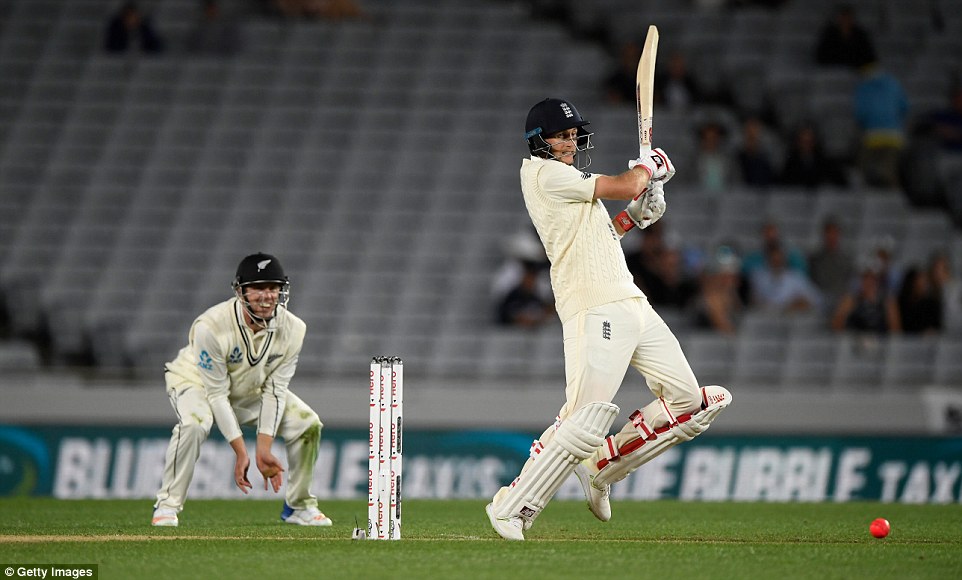 However, the Yorkshire batsman was caught behind in the final ball of the day as England finished on 132/3 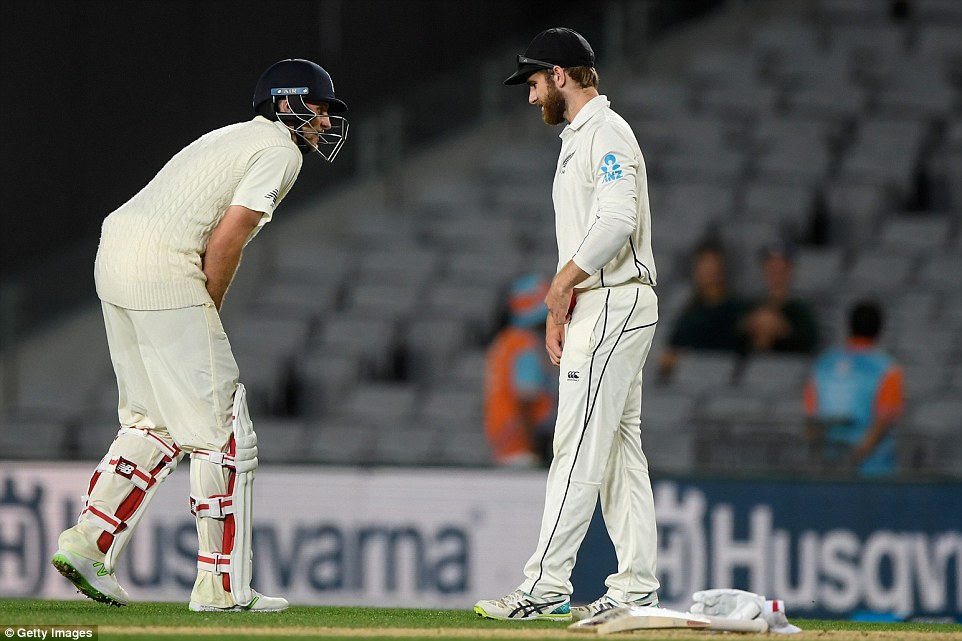 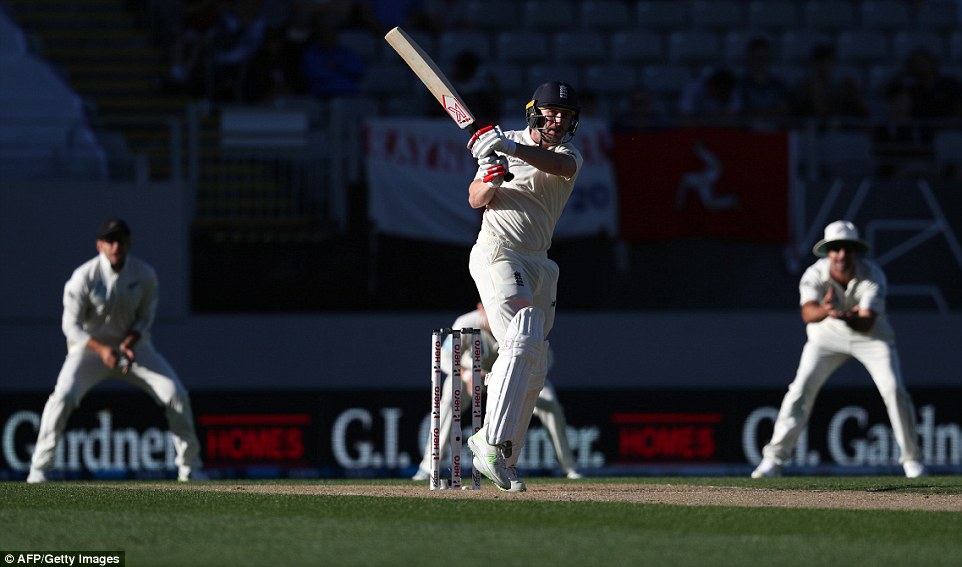 England had been set the huge task of lasting 148 overs to emerge unscathed from an Auckland Test they began by crashing to 58 all out after New Zealand had finally ended their agony in the field by declaring on 427 for eight, a massive lead of 369.

And their already gigantic task was made even harder when Alastair Cook, lacking all foot movement and balance, edged one of the worst balls Trent Boult has delivered in this Test down the legside to BJ Watling.

That should have been the cue for England to finally realise they had to just shut up shop and show some much overdue application rather than play as though they still had a chance of winning this first of two Tests.

Not a bit of it. Instead Stoneman, who began this series very much on trial after struggling through the Ashes, virtually played a shot a ball and nearly gifted New Zealand his wicket with a variety of over expansive attempts at scoring. 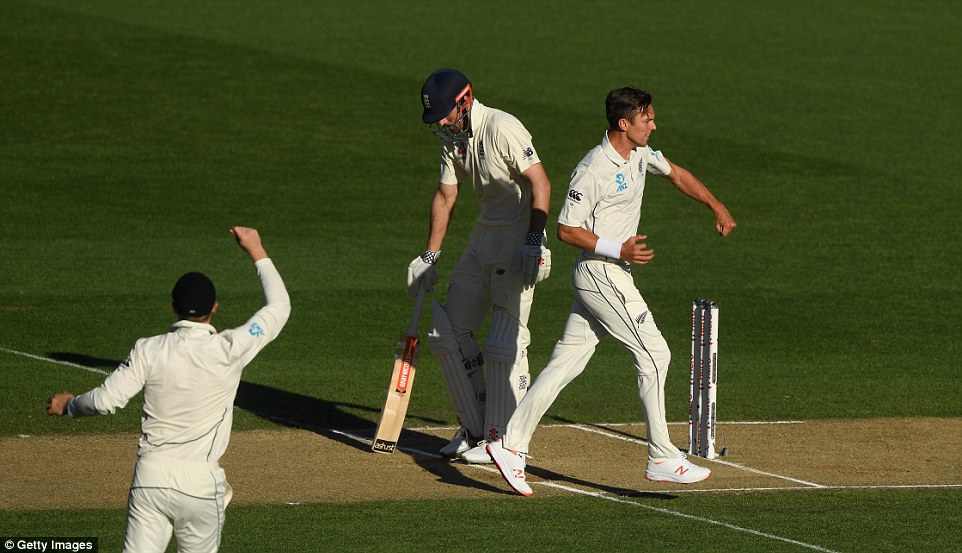 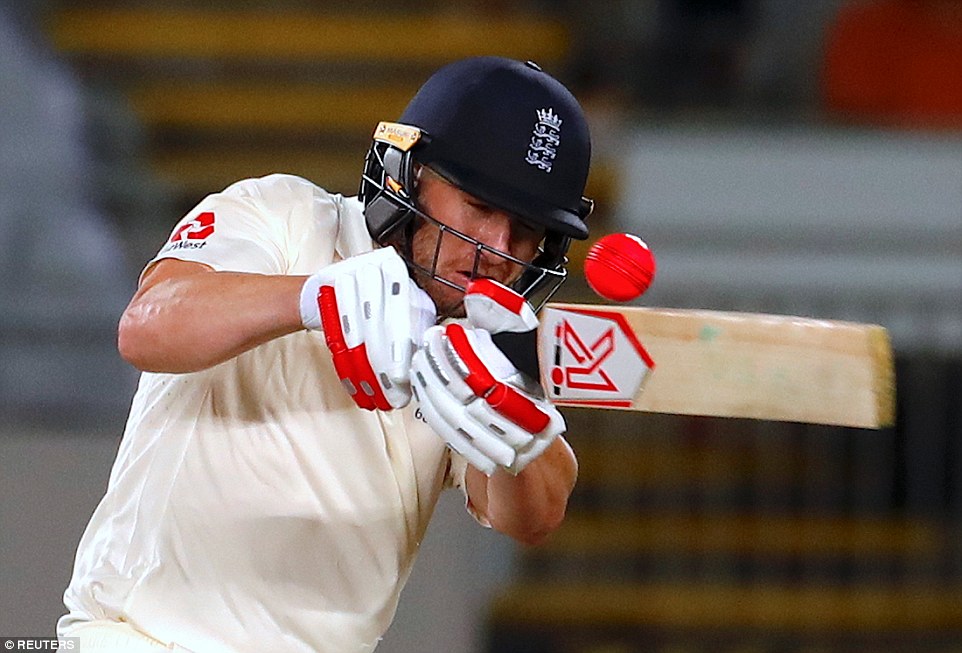 Cook’s opening partner Stoneman hit 55 off of 91 balls, including six fours and a six in the Day/Night fixture

It did look as though the Surrey opener had weathered the storm as he and captain Joe Root settled into a second wicket partnership of 88 and New Zealand were forced into their first bowling changes of the match.

Stoneman moved to his fourth half century in Test cricket – he is yet to reach 60 – in a fortuitous matter when he top edged a six off Neil Wagner, who specialises in short-pitched aggressive bowling that would hardly have been a surprise to England.

Yet off the very next ball, this one delivered from round the wicket, Stoneman attempted the very same shot and succeeded only in pulling the ball straight into the inviting hands of Boult at a wide long leg. Madness.

At least Root, as usual, looked on a completely different level to the rest of the England batsmen and had moved on to yet another half century by the close in partnership with Dawid Malan before he fell off what became the day’s last ball. The pair added 38 with England finishing day four on 132 for three, still 237 behind. 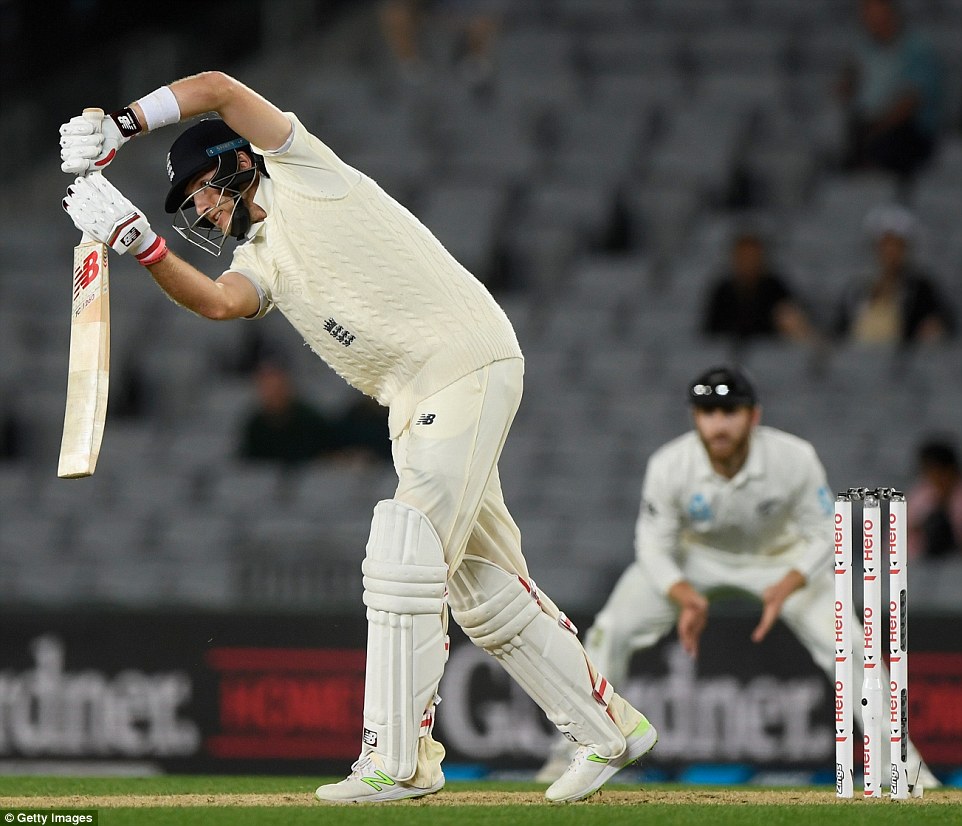 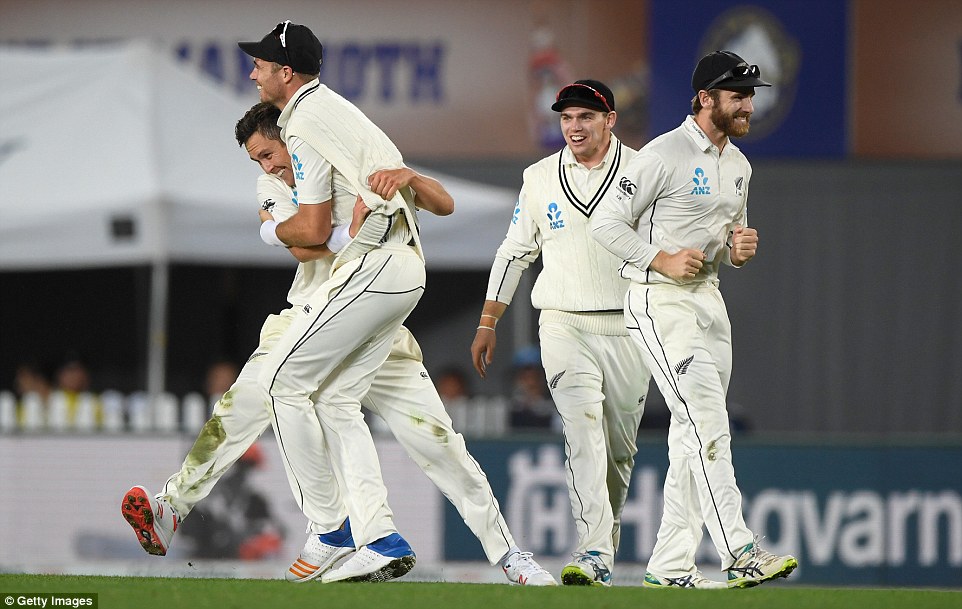 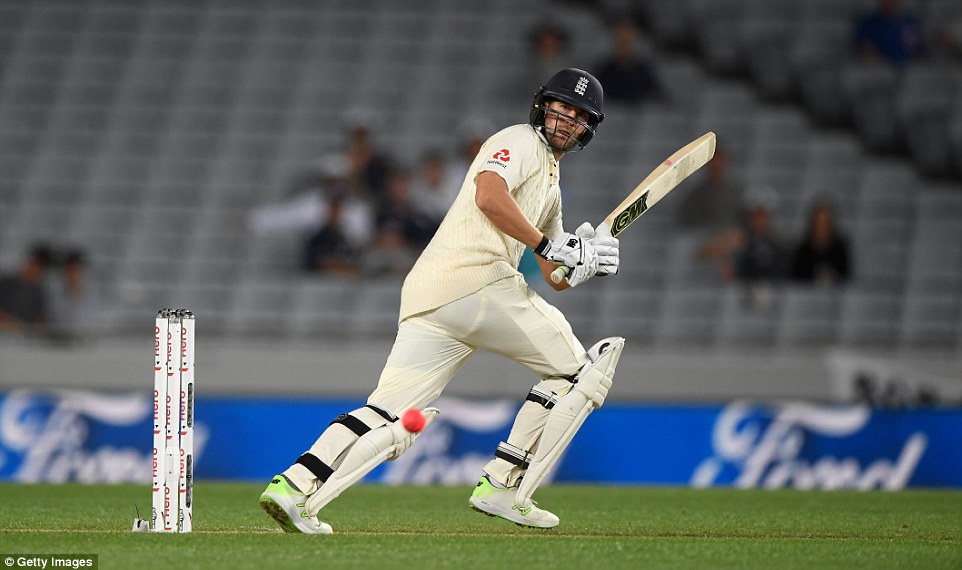 Dawid Malan also contributed alongside Root, scoring 19 runs off 48 balls towards the end of day four

On that occasion England batted through 143 overs to draw the game with the last pair at the crease, Matt Prior making a brilliant unbeaten century and Monty Panesar somehow surviving alongside him. What England would give for a repeat now.

Earlier New Zealand had moved steadily to a position where England would have to face two new balls, probably both under lights, while not having time to take time out of the match by edging too far in front of the home side’s score.

At the centre of it was Henry Nicholls, who not only faced 268 balls for his unbeaten 145 but batted over four days with the second and third days virtually ruined by rain to provide England with a glimmer of hope.

England were unhappy with the quality of the pink ball throughout and had the second one changed as they had the first but none of the balls they tried offered the sort of swing expected in day-night cricket, particularly under lights. 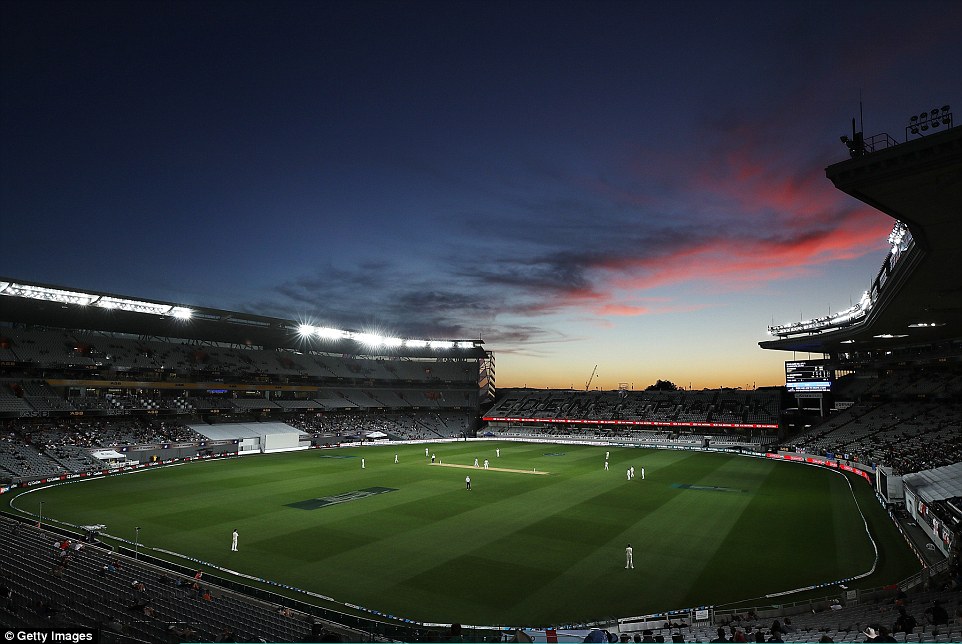 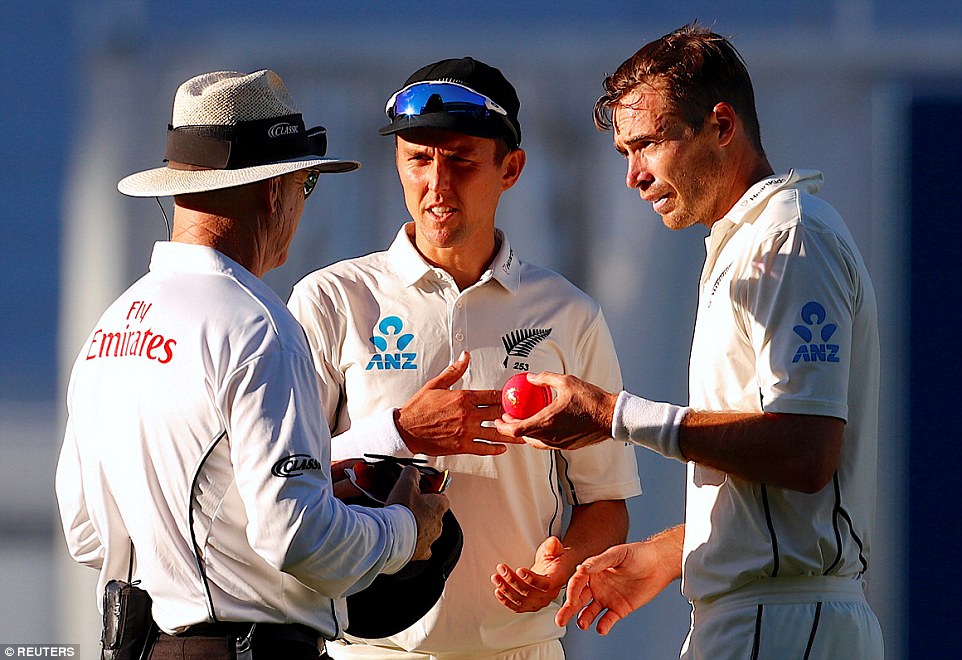 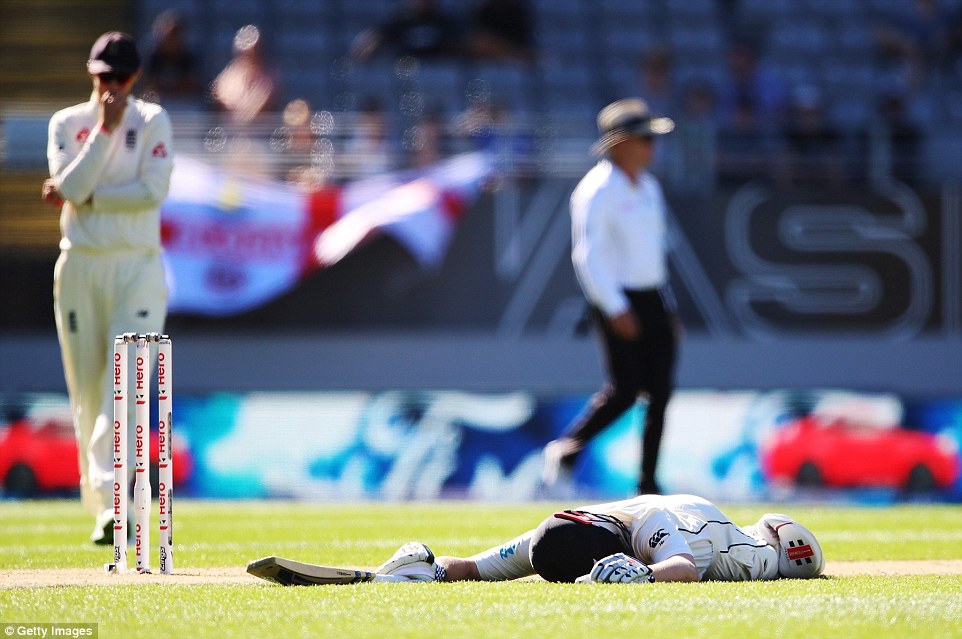 At least Stuart Broad bowled extremely well in taking three wickets while Jimmy Anderson, even though the ball stubbornly refused to swing, is bowling as well as ever and added three wickets of his own.

It is the support bowling that is providing England with so much trouble overseas. Chris Woakes is just not the same performer away from home and the Duke ball and was wicketless here while Craig Overton does not look to have the pace or movement to be a consistent wicket-taker in Test cricket.

Moeen Ali, meanwhile, was just as ineffective as in the Ashes and bowled 17 overs without success. Moeen is such a crucial player to England but, like Woakes, his place away from home should now be in jeopardy.