He promises to help people shed fat and get fit with his Lean in 15 programme.

But even The Body Coach Joe Wicks admits that many of the dishes in his latest cookbook, Cooking for Family and Friends, are ‘high in calories’.

Now a nutrition coach from Bristol has revealed that some of his recipes from the new book contain double the calories and fat of fast food meals in exclusive infographics produced for FEMAIL Food & Drink.

One beef stew dish has more than 1,000 calories per serving, more than double that of a Big Mac.

Matt, of Apex Fitness Systems, calculated the calories and nutritional information in several recipes from the cookbook to find out how they compare to a Big Mac, a Domino’s dessert and a Burger King bacon burger with fries.

Joe writes in the introduction to the book published in May – which says on the cover that it contains 100 ‘lean’ recipes – that he doesn’t include calorie counts as he doesn’t ‘think people should obsessively count calories’.

He instead recommends that his followers exercise four to five times a week for 25 minutes a day to be able to enjoy the meals in his book and become lean.

But Matt says the calories ‘always matter’ when it comes to losing weight. 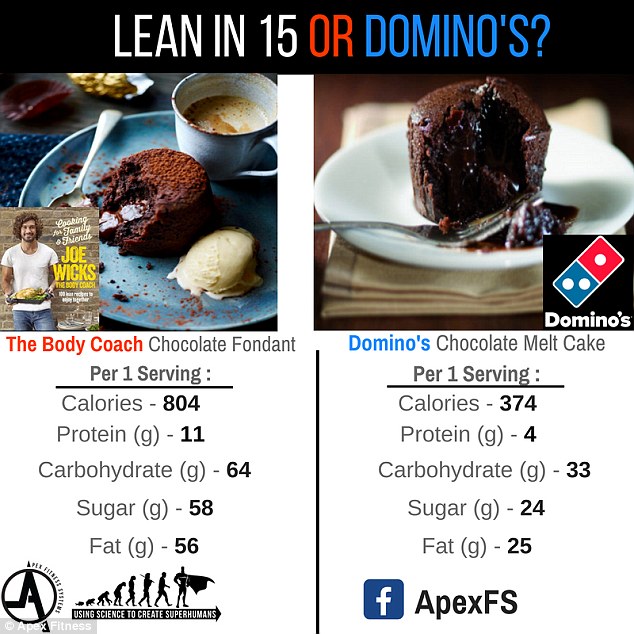 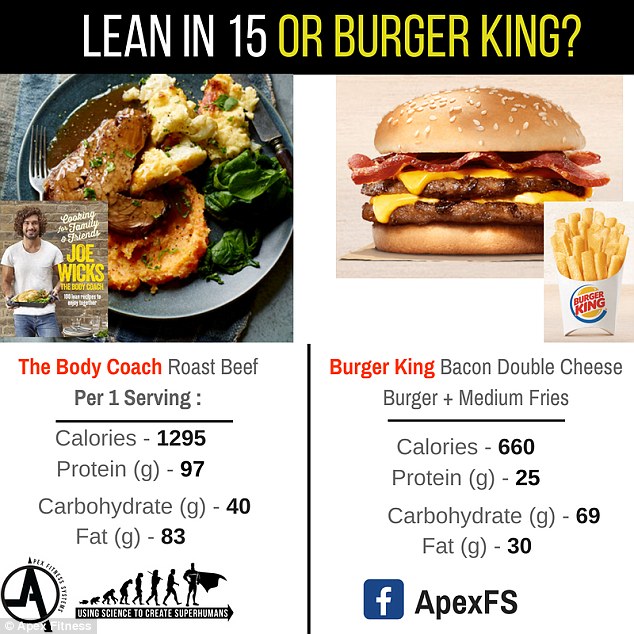 He compared Joe’s Nanny Kath’s Beef Stew to a Big Mac Burger from McDonalds and found that the stew contained 1,028 calories compared to the burger.

It also had more than double the fat, containing 52g compared to the burger’s 25g.

Matt found that one of the most calorific meals in the book is Joe’s Roast Beef dinner, which he said has 1,295 calories per serving.

The roast beef dinner also had 83g of fat compared to 30g in the burger and fries meal.

A similar Chocolate Melt Cake from Domino’s has 374 calories and 25g of fat.

However Joe does admit in the blurb for his Chocolate Fondant recipe that it is not lean. ‘In fact quite the opposite,’ he writes, ‘but that’s why I love it and enjoy it so much as a treat once in a while.’

Joe admits in his introduction that his followers must make sure that they burn more calories than they consume to ‘see changes in your body’, despite not including calorie counts to help them make the right choices.

He writes: ‘If you want to actually see changes in your body, get moving and try to make exercise a part of your life.

‘There’s no need to try to get by on a really low-calorie diet when, instead, you can exercise, feel good, and eat all the meals from this book knowing you are making progress.’

Joe Wicks and his representatives have been contacted for comment.