Multi-millionaire televangelist Joel Osteen has defended his decision not to open the doors of his megachurch to Hurricane Harvey evacuees earlier.

Busloads of Texans arrived at at his 17,000-seat Houston on Tuesday after he announced that its doors were open following supposed interior flooding that kept stranded people out.

‘Our number one priority is safety – this building flooded back in 2001,’ he told KHOU. ‘There was six to eight feet of water in the main auditorium.’

He told the outlet that over the weekend the church put up new flood gates and the water was just ‘one foot from coming over’.

‘So it was very close to being another disaster here,’ he added. ‘Our goal is to help people, sometime people try to put out a false narrative.’ 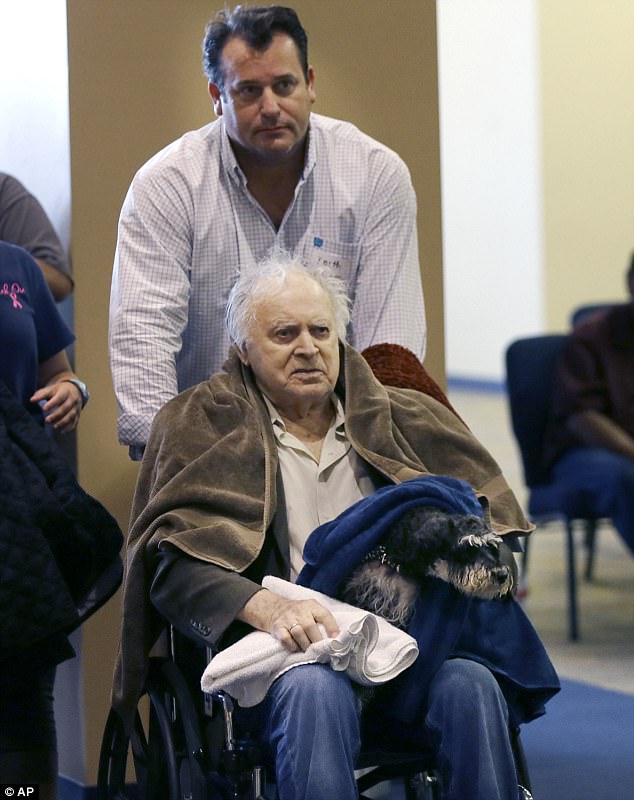 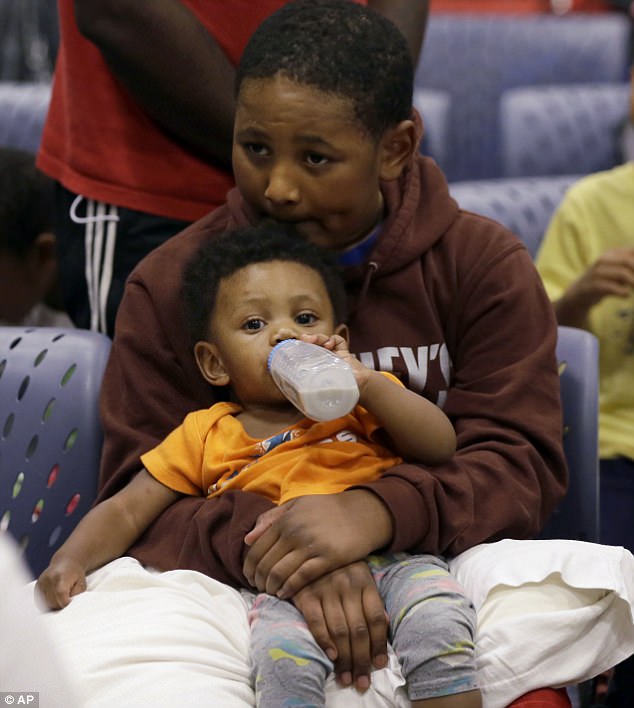 On Monday, Osteen had said in a Facebook post that the church was ‘inaccessible’ due to flooding.

But now video and photos are emerging that suggest the building had not been inundated with water Monday, and could have taken in several hundred people.

In one video, posted on Monday night but filmed during daylight, a man is seen walking around the church, noting just a few puddles here and there.

‘Looks like you can f**king open up your church right now, Joel,’ he says. ‘Why don’t you go ahead and do it? Because you know what’s happening across the freeway. People are dying.’ 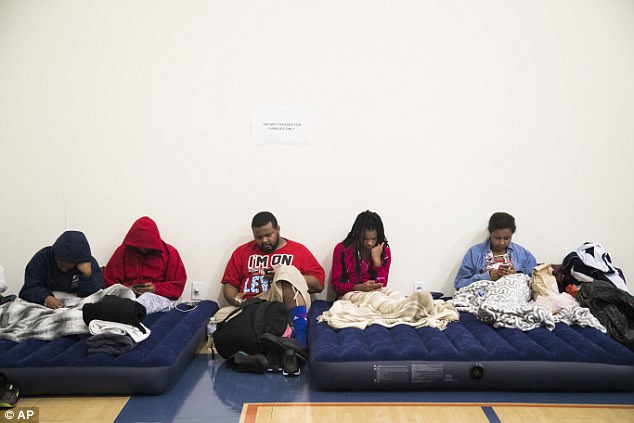 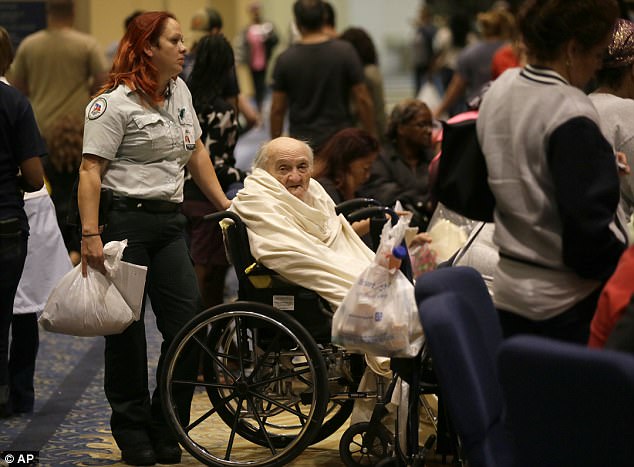 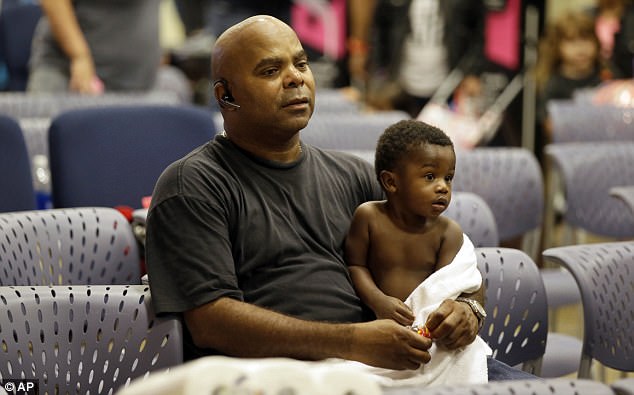 Will Sutton (left), who had to leave his home, holds his 11-month son Jayden at Lakewood Church in Houston

The clip shows the man – and his friend, Eric, running around the exterior of the building, noting the lack of flooding.

‘I don’t think any pressview crews could get over here to drop off the victims because the traffic is horrible!’ he says sarcastically after Eric points out that the traffic on the adjacent Southwest Freeway is moving fine.

‘At least a centimeter of floodwater! This is horrible!’ he remarks just before Eric jumps into a couple of shallow puddles.

The pair then walk up the two flights of stairs that lead to the front door of the church, calling out for Osteen.

‘Has anyone seen Joel Osteen? He’s flooded right now – apparently!’ he shouts, before adding to camera: ‘I’m tired of people telling me that he’s done enough.’ 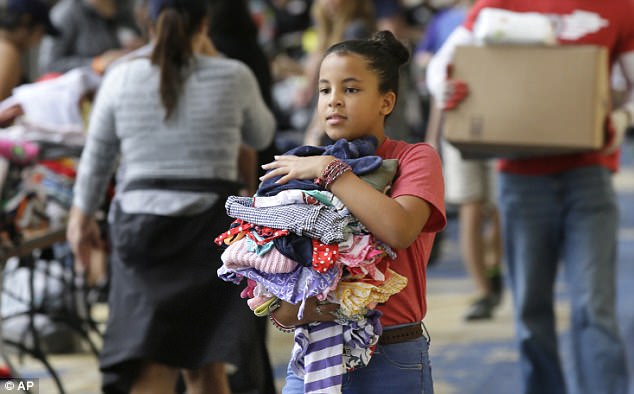 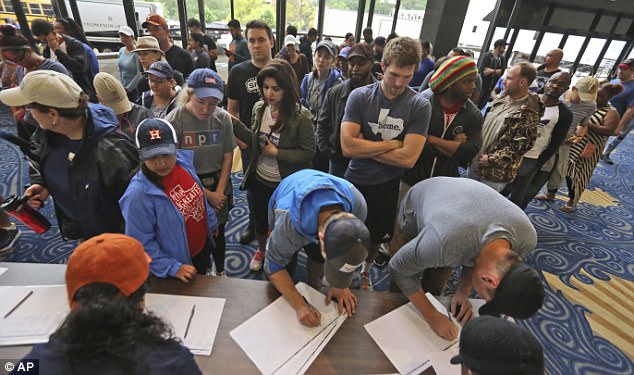 At one point, they notice plush – and seemingly dry – carpets in the lobby of the church: ‘Wait, I was told by so many of his followers that he was flooded in! But look at those carpets!’

He continues, mockingly: ‘Can you imagine how much money you’d have to spend on those carpets to get them clean? Probably thousands of dollars! I mean, I don’t blame the guy…’

In another video posted Monday, Twitter user Fan_of_fiction responded to a request for proof that Lakewood was flooded with a video showing the opposite.

‘It’s not flooding outside,’ she wrote to accompany the clip, which was shot from the passenger seat of a car driving around the outside of the massive, $7.5 million church. 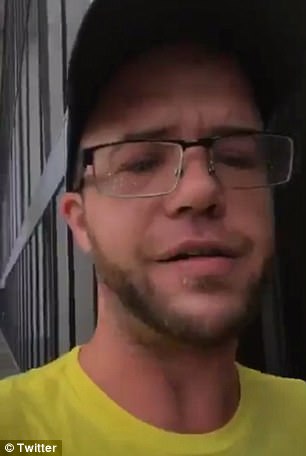 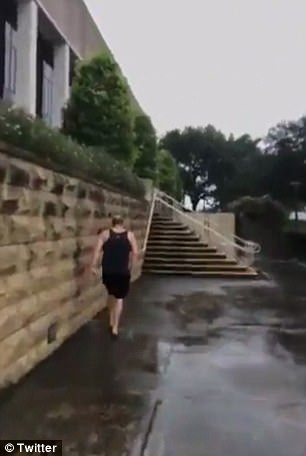 Video shot by two men (left and right) and posted on Monday showed the church’s exterior untroubled by flooding. Osteen claimed on Facebook that the church was ‘inaccessible’ 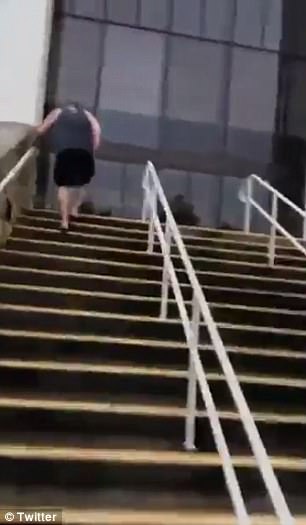 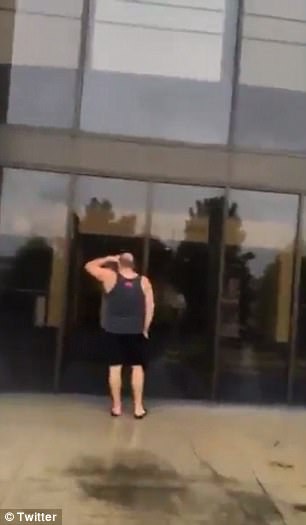 During the course of the video, they walk up the two flights of stairs that elevate the front door up from ground level, and note that the interior does not seem flooded at all

Although the windows were rain-spattered, the road – which is on a lower level to the church’s front door – was clear of water and the church seemed mostly fine.

A watery reflection could be seen on the floor in an underground parking garage entrance below the building, but it’s unclear how deep – if at all – the water was.

The road outside the front of the church was fine, and the lights were still on in the building.

The following day – in response to online anger about the enormously wealthy pastor’s apparently lack of care for the needy – the church released photos it claimed were of the flooding. 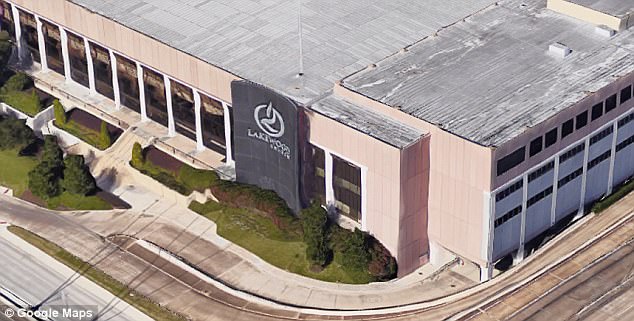 This aerial view shows both the underground parking garage (right) and the main entrance (left), which is elevated from the road by two flights of stairs

Those pictures showed what appeared to be substantial flooding in underground and overground parking areas and a flooded corridor – apparently in a basement.

There was also a photo of what looked like a lobby area with puddles on the floors and a deep well of water in the foreground.

However, the foreground area could have been a water feature, as it had what appeared to be spotlamps in it.

It was unclear at what time or on what day the photos were taken. 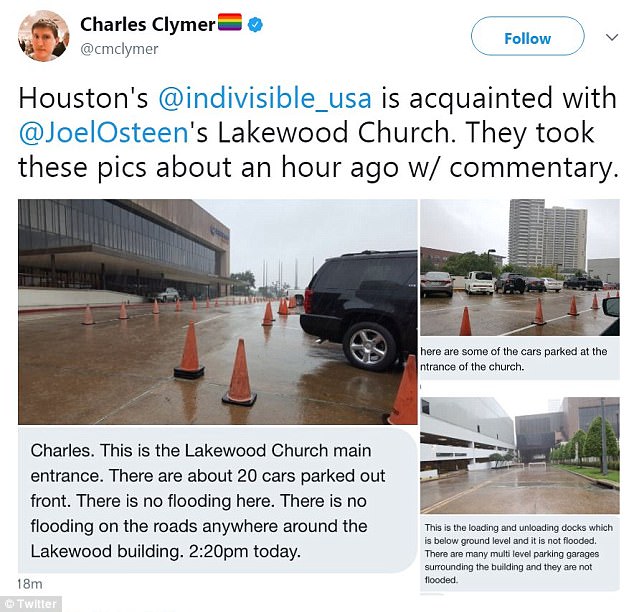 On Monday these photos were posted online showing purportedly showing Lakewood Church unbothered by flooding at 2.20pm. It claimed the parking garages were also not flooded 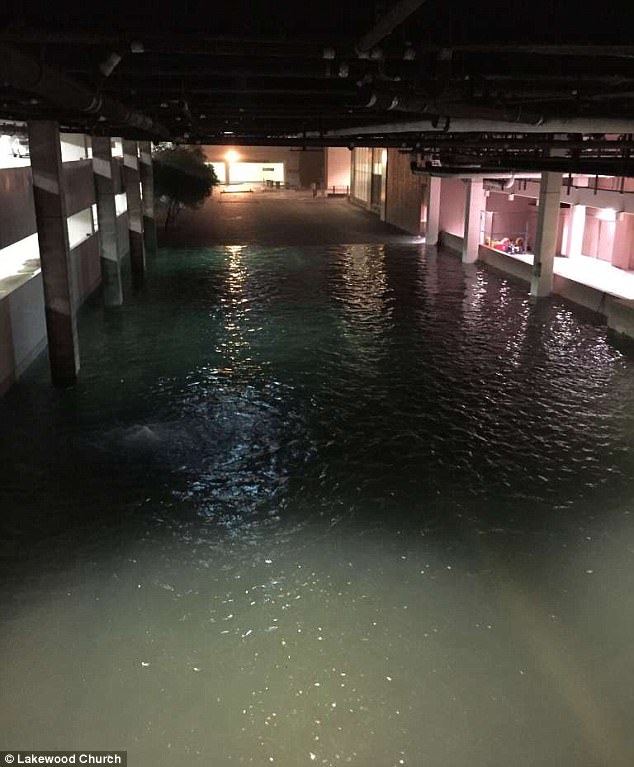 But on Tuesday the church released a selection of photos – including this one of the parking garage – which it claimed proved it had been flooded. But when they were taken was not clear

Along with the photos was a statement that the church would be open only as a ‘distribution center’ for the time being.

It would not accept refugees until other centers were at capacity, the statement said – but Osteen contradicted that on Twitter soon after.

‘Victoria and I care deeply about our fellow Houstonians,’ he tweeted. ‘Lakewood’s doors are open and we are receiving anyone who needs shelter.’

A hashtag trend started under Osteen’s name as people began mocking him for what they saw a man who was happy to use Jesus to take money, but less happy to follow his teachings. 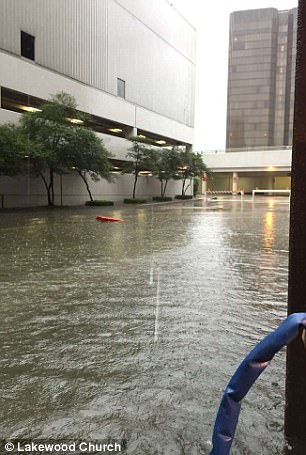 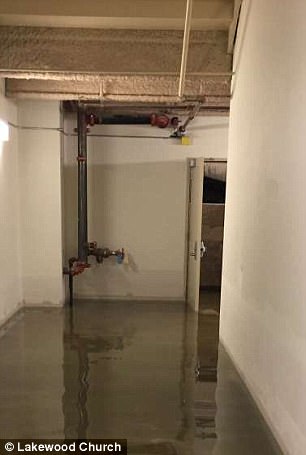 The church released these photos purportedly showing flooding indoors and outdoors, although it said the waters have since receded. It’s not clear when the pictures were taken 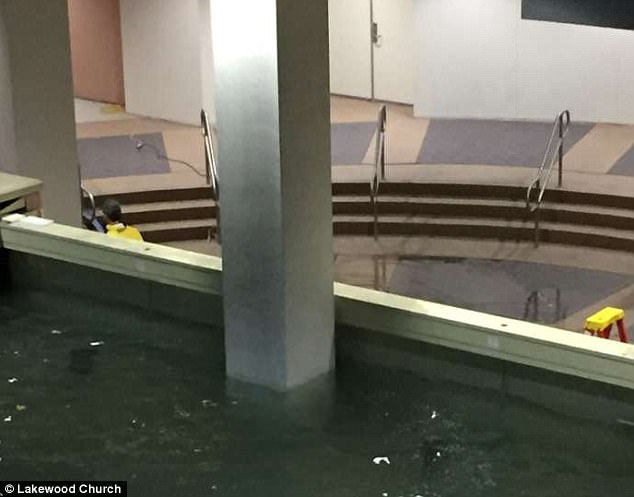 This photo shows flooding in the church – although the area in the foreground looks like a water feature, the background shows the floor slick with water

Osteen’s church was initially only going to accept people once other shelters were full, a spokesman said. But now the televangelist says it’s ‘receiving anyone who needs shelter’

‘Never forget,’ wrote Jay Dav-O, ‘It took a public shaming for a man who preached Christianity to behave like a Christian.’

Sylus Rothchild went Old Testament on Otseen’s behind, writing: ‘You’re like Noah, if he said to the animals, “Hope you can float.”‘

‘Ironic that @JoelOsteen’s religious empire is crumbling due to a biblical sized flood,’ wrote another man named Joel.

‘Houston Mosques open their doors to #HarveyVictims w/o having 2 been shamed n2 it like #JoelOsteen,’ tweeted a user named Beth. ‘Muslims more Christlike today than a Christian!’

Osteen seemed displeased by the responses and began blocking those who mentioned him, including one man who politely invited him to ‘be your best self.’

But there were positive results noted, too. One user who had been putting the pressure on Osteen noted that ‘countless’ air mattresses had been inflated in the church’s halls – and posted a picture to go with it.

Several users took to Twitter after Osteen promised to open up his church, shaming him for what they saw as reticence to do his Christian duty

This user went Old Testament on Osteen’s behind, with Noah and flood imagery being common among the online mockery 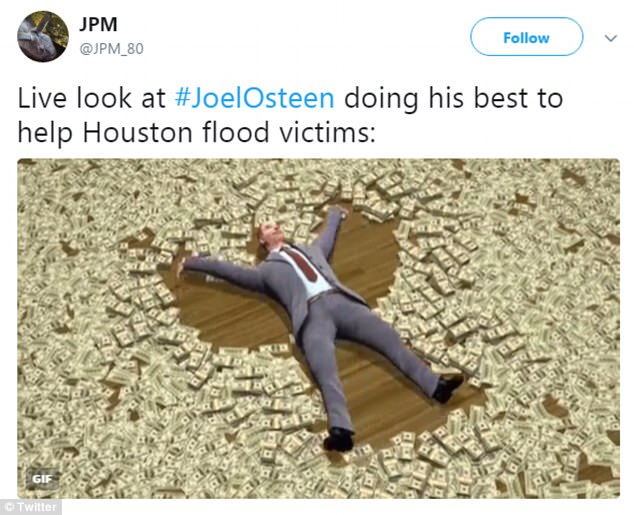 JPM took Osteen to task over his wealth; the televangelist has a personal worth of $40 million; his house cost $10.5 million, and the church itself more than $7 million 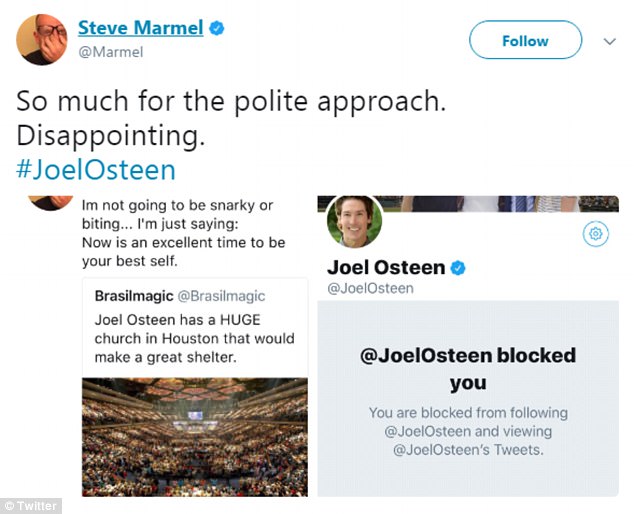 Osteen began blocking people who he thought were attacking him – including this man who politely said ‘I’m not going to be snarky or biting… I’m just saying: Now is an excellent time to be your best self’ 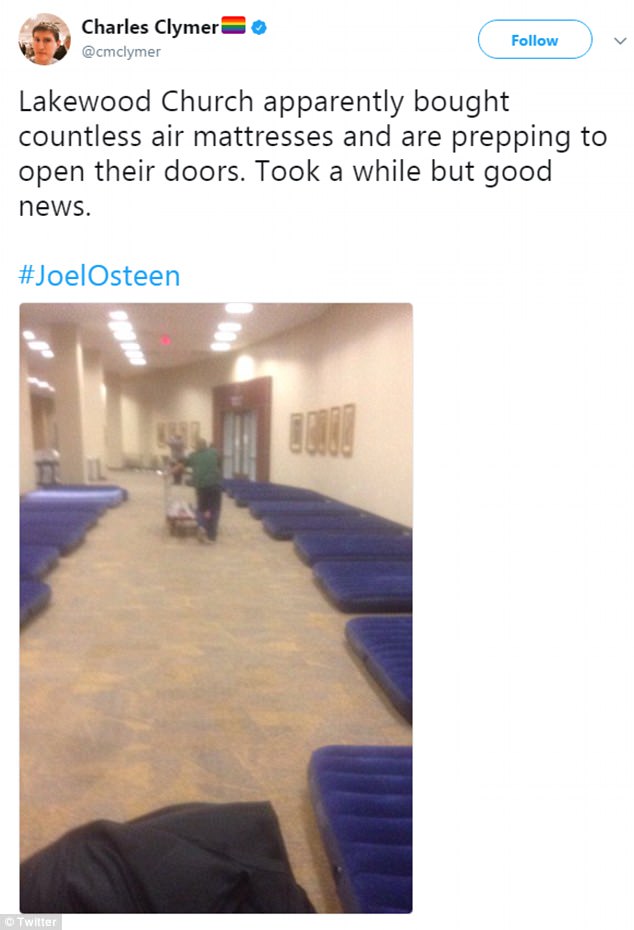 But there were some positive tweets. This user had been pressuring Osteen’s church since Tuesday, but noted that air mattresses were being inflated inside

Earlier on Tuesday, church spokesman and Osteen’s father-in-law, Donald Iloff, told CNN: ‘We have never closed our doors. We will continue to be a distribution center for those in need.’

However, he said that the church would not be taking in people seeking shelter until other places were full up.

‘We are prepared to shelter people once the cities and county shelters reach capacity,’ Iloff said.

‘Lakewood will be a value to the community in the aftermath of this storm in helping our fellow citizens rebuild their lives.’ 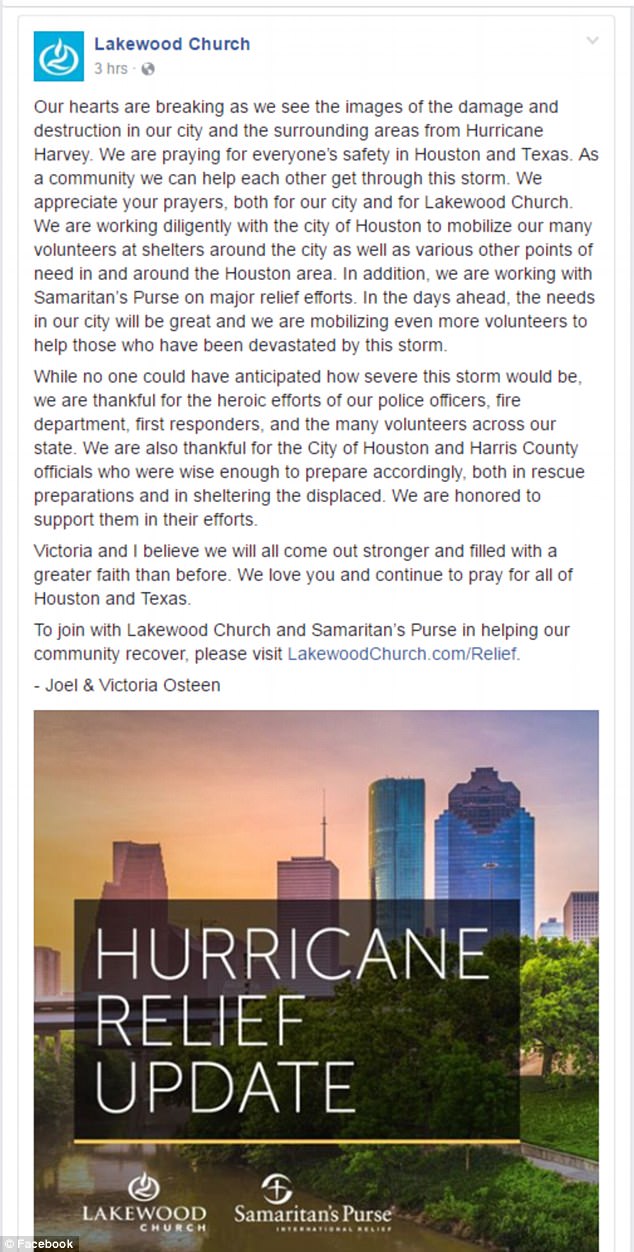 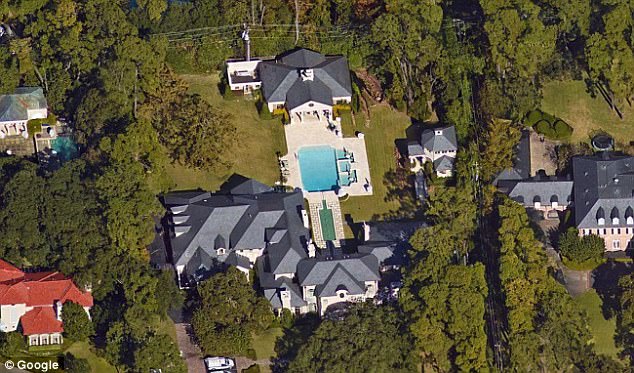 Osteen is worth an estimated $40 million – and his sprawling mansion (pictured) in River Oaks, Fort Worth is worth $10.5 million

Iloff said that at least three people went to the church before they were taken to the George Brown Convention Center.

He also released photos of the church during the flooding, including corridors knee-deep in water and a water-slick lobby.

Iloff said that those waters had already receded, however, and that it would be open around noon. He said it would also act as a donation center.

He said at least several hundred people could be housed on the building’s second floor.

On Monday the official Lakewood Church Facebook page said that the church was ‘inaccessible due to severe flooding.’ 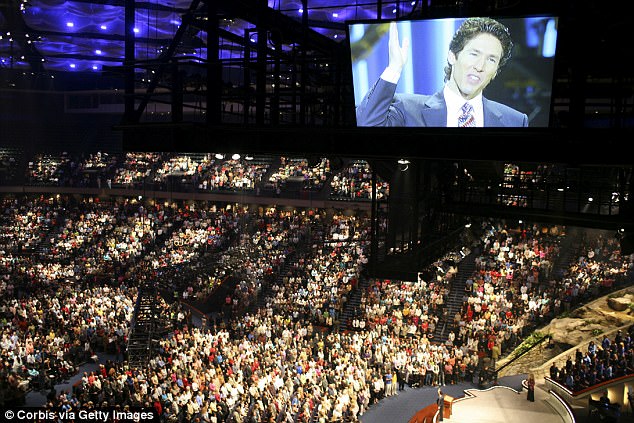 Osteen’s Lakewood church has around 17,000 seats, and is used as a base for his TV sermons to around 25,000 people

The post began with: ‘Our hearts are breaking as we see the images of the damage and destruction in our city and the surrounding areas from Hurricane Harvey.

‘We are praying for everyone’s safety in Houston and Texas. As a community we can help each other get through this storm.

‘We appreciate your prayers, both for our city and for Lakewood Church. We are working diligently with the city of Houston to mobilize our many volunteers at shelters around the city as well as various other points of need in and around the Houston area.’ 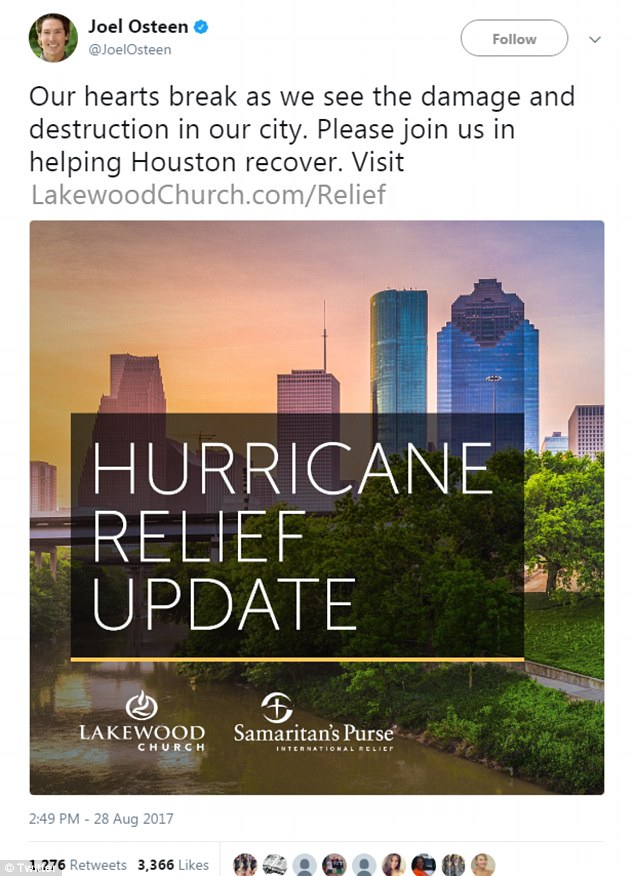 Osteen also tried to raise funds for the church, although he then received a backlash from people who said he wasn’t putting enough of his own $56.5 million net worth into helping

A Twitter user named Phillip Harris was equally disappointed with Osteen on Monday, as reports that the massive church wasn’t opening continued to circulate