Joey Barton’s stag do descended into an ‘extremely violent’ mass brawl as one of the former footballer’s friends allegedly punched three men.

The 36-year-old Fleetwood Town manager was celebrating in Newquay, Cornwall, when sunbathers were left scrambling to get out of the way.

One holidaymaker told The Sun that the scrap ruined the Bank Holiday atmosphere on Towan Beach as parents dragged their children away from the scene as it descended into chaos.

Ex-Manchester City midfielder Barton had been drinking and running races with his friends.

Suddenly, a man from another group rugby-tackled a friend of the former Newcastle United player.

Barton’s friend quickly retaliated, hitting three of the group, according to the witness.

It came after the stag and his friends arrived on Friday for a three-night celebration of his impending marriage to Georgia McNeil. 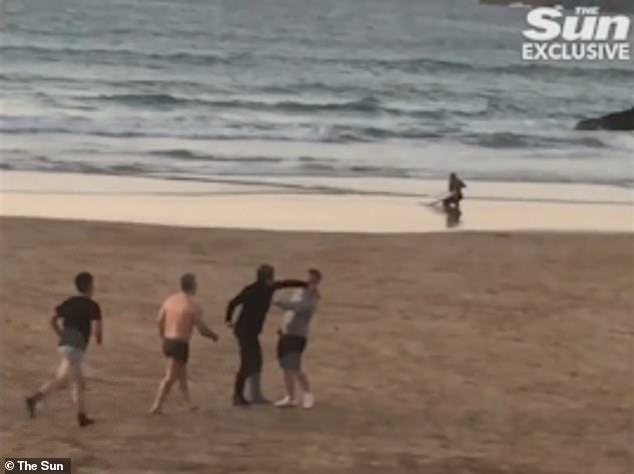 Sunbathers were left scrambling to get out of the way of the brawl on Towan Beach, Newquay 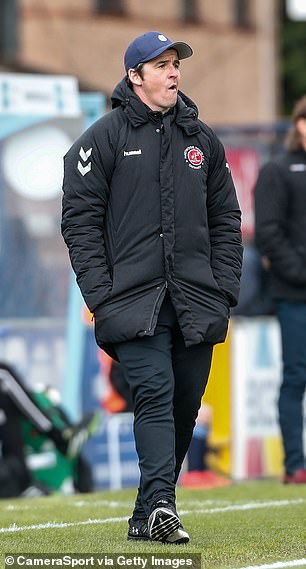 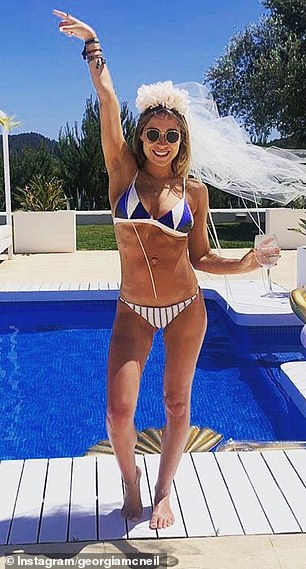 Joey Barton (left, on May 4 at Wycombe Wanderers v Fleetwood Town at Adams Park) was celebrating his impending marriage to Georgia McNeil (right, in Ibiza on her hen do on May 12)

The party went bar crawling and hired out a lapdancing club for the booze-fuelled festivities.

But on Sunday things turned ugly on the beach as the row erupted and was caught on camera.

A woman says ‘oh my God’ as Barton’s friend punches the attacker and wrestles him to the floor only for eight men to jump in. He then floors another two.

Revellers trade blows as one shirtless yob kicks a man as he lies defenceless on the ground. 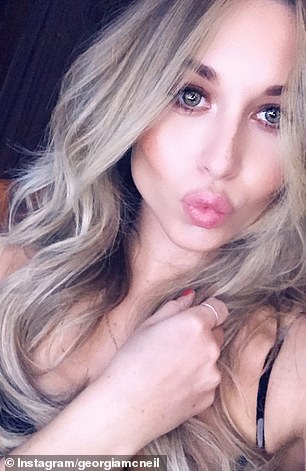 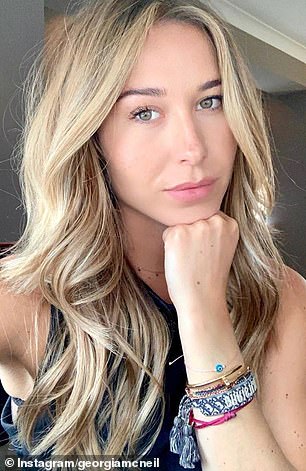 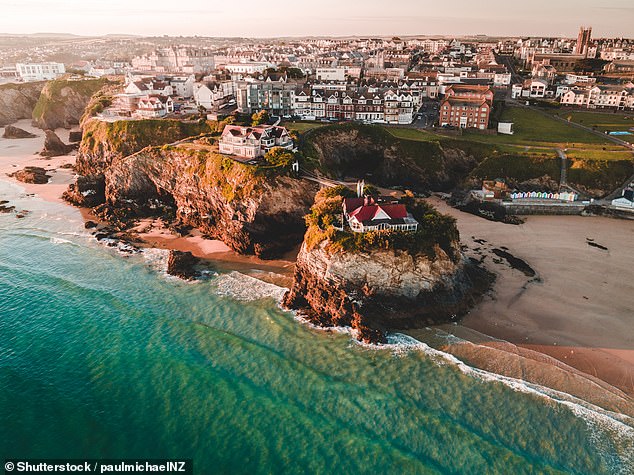 The fight only ended when the second group fled Barton’s party. Police say they have not received any report of an incident.

It comes after it was claimed that one pub had kicked his party out for being too loud.

But another witness claimed that Barton ‘was good as gold’ and ‘very polite’ when recognised.

While in the area, they are understood to have stayed at The Headland Hotel and Spa, a luxury venue rated 4.5 out of 5 on Google’s reviews. 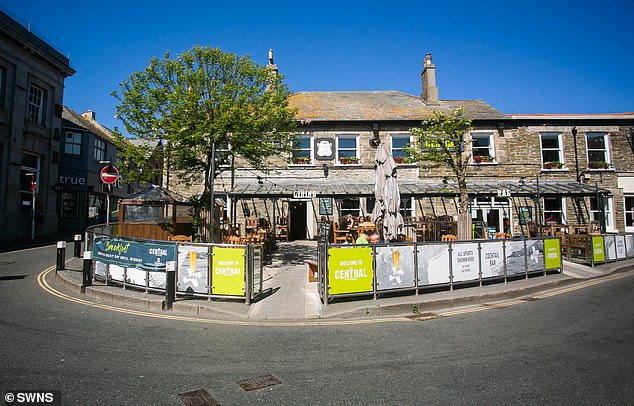 Pictured: The Central Bar in Newquay, where Joey Barton and his friends are said to have visited during his stag do

They visited many bars in the area, including The Central, The Red Lion, Sailors nightclub, lap-dancing club The GoGo Room, and the Fistral Beach Bar where they would begin and end each night of their holiday.

Nick Hayman, 53, manager of the Fistral Beach Bar, said: ‘They were no hassle at all, I heard they were in on a stag do but they were very well behaved.

‘They were nice to all the staff, tipped with every round, and would pose for photographs and sign autographs for anyone who asked.

‘I can’t stress enough just how good they were, so I was surprised to hear how they had been acting.

‘They were here most of the night on Friday, at midday and then again later on on Saturday, and they were here Sunday too, I can’t remember what time.’

News of the groups exploits were well known in town, although many of the venues they visited didn’t see any trouble. 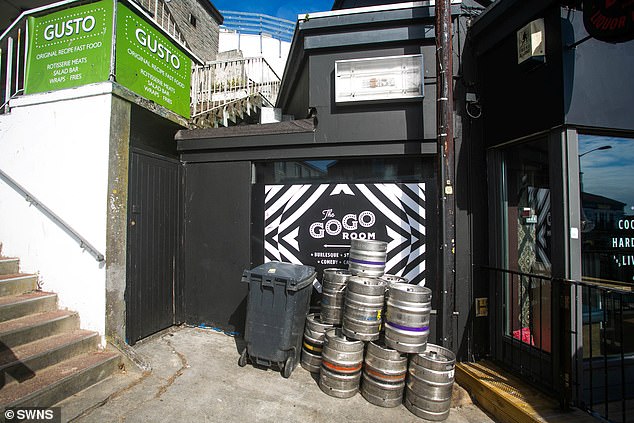 A spokesperson for Johnny’s Tobacconist said: ‘They were in the central, I know because my mate was doing a gig in there. He said Joey Barton was in.

‘He said it was a great gig and there was no trouble, no one has heard anything about him having a fight.’

One local resident, who wished not to be named, said that Joey Barton and his friends had been asked to leave the Sailors nightclub after an altercation.

They said: ‘I heard it all kicked off in Sailors with them before they were kicked out.’

The duty manager for Sailors nightclub refused to comment, saying: ‘There’s nothing I can tell you.’

A local singer reported that an altercation also broke out at the Red Lion, but the manager was unavailable for comment.

A bar worker who didn’t wish to be named said: ‘I heard that Joey Barton was in here from the manager.

‘I didn’t witness it, but I heard there was some play fighting and they were asked to calm down. They left shortly after, that’s all I know.’

The Headland Hotel have been contacted for statement.

Barton’s brawling over the years 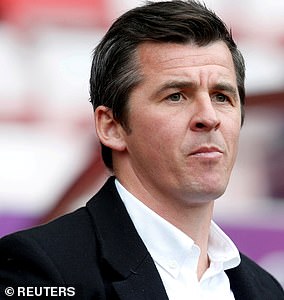 Joey Barton’s violent history has earned him a notorious reputation over the years.

He is known for scrapping on and off the pitch and has even served time for assault.

Barton sparked a mass brawl in a pre-season game against Doncaster in July 2004.

At a Christmas party in 2004, he stubbed out a cigar in the eye of Jamie Tandy, who at the time was his Manchester City teammate.

The midfielder was fined £60,000 over the incident.

Three years later he attacked Ousmane Dabo during a training session and received a four-month suspended prison sentence for ABH.

Then in 2008 he was involved in a fight in Liverpool city centre. He was jailed for six months over the assault.

Police are currently investigating the Fleetwood manager over an alleged brawl in a tunnel with another club coach last month.