JOHN HUMPHRYS: I admit… I lived to work. Now I wish I’d just worked to live

The news that we might be facing a lethal new virus had just broken and the atmosphere in the hotel suite where I was chairing a conference was strange.

A few people were bumping elbows and avoiding handshakes but most of us thought it was rather silly.

When the conference ended I descended into the jaws of hell — otherwise known as a London Tube station at rush hour. I could have lifted my feet off the ground and been carried along with the mass of people. Or possibly trampled underfoot. And this was normal.

Within a few short weeks it had become unimaginable. We weren’t allowed to have a friend around for a cuppa let alone make the daily commute to the office. The centres of our towns and cities were as silent as a Quaker gathering. We were told to work from home.

And now, after 15 long months, we are beginning to return to the old normal. Or are we?

Not if it means we’ll all be trudging off to our offices five days a week. Even those big employers who had been adamant that home working was a strictly temporary crisis measure are now acknowledging that for many of their workers it’s here to stay.

The boss of Citi Bank, which has 9,000 staff in the UK, has said he expects staff to come in ‘at least three days a week’. Not five days, you’ll notice. That’s becoming commonplace. The boss of Channel 4 said three days provided a ‘good balance’. The boss of the sandwich chain Pret a Manger is aiming lower. ‘At least two days’ for his office workers.

Some companies are reluctantly accepting this as inevitable. Others are positively encouraging it. Fewer office workers means fewer expensive offices.

But there’s something else going on that may prove even more significant. It’s summed up in that age-old question: do we work to live or live to work?

The world of work has changed massively just in my lifetime. When I was a youngster you could set your watch by the sound of the factory hooter signalling the end of a shift. The pattern was rigid: five eight-hour days plus Saturday mornings.

The switch from a manufacturing economy to a service economy gradually changed all that. Working hours had to be more flexible when the shops started opening on Sundays.

Mothers rightly demanded more parental leave. And then so did fathers. Zero-hour contracts gave bosses the power to hire staff when it suited them. 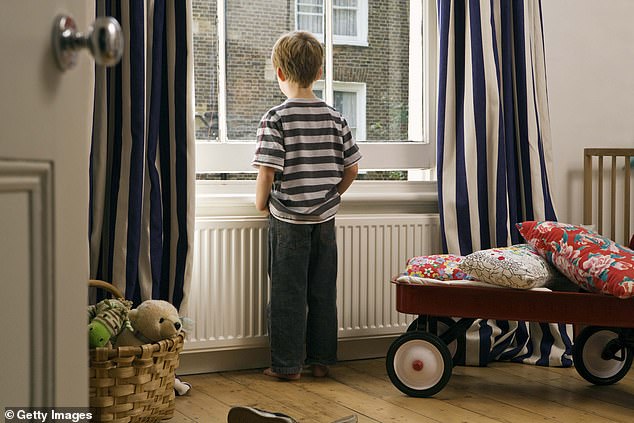 Mothers rightly demanded more parental leave. And then so did fathers. Zero-hour contracts gave bosses the power to hire staff when it suited them (file photo)

But through it all the belief in the five-day week survived.

Now that, too, is being challenged. Peter Cheese, the chairman of the Government’s Flexible Working Taskforce, says the last 15 months have provided a ‘generational opportunity’ to alter our traditional working patterns.

‘Going to work’ might no longer be the norm but the exception and a four-day working week might ultimately become standard.

There are many companies, of course, whose productivity would be hit by a four-day working week and which could not afford it. And working from home has in a number of instances led to worse customer service.

But it’s worth looking across the Atlantic. Four million Americans quit their jobs in April. That’s the highest figure since records began and American firms are taking extraordinary steps to keep their staff. The tech firms are setting the pace.

Bumble, the dating app site, has just told its workers they can take an extra week off. Fully paid, of course. Facebook and LinkedIn have done something similar. The justification is what’s called ‘burnout’.

We hadn’t heard of ‘burnout’ when I was a youngster. It was called ‘hard work’. But maybe that’s too cynical and we should resist sneering at the overpaid and over-privileged denizens of Silicon Valley for wanting more pay and more privileges for less work.

Maybe Peter Cheese is on to something when he suggests that we’ve had enough of the five- day week.

Even as I write that I feel a touch hypocritical. The expression ‘physician heal thyself’ comes to mind. If anyone has put his work before everything else it’s yours truly.

My defence is that I didn’t really have much choice when I was young.

The money I earned from my jobs as a paper boy and delivery boy when I was in school helped boost the fragile family finances and kids like me had never heard of ‘gap years’ for the very good reason that university wasn’t an option. We left school at 15 and started work the next week.

But I did have plenty of options as I grew older and my career started picking up apace. By the time I was 25 I was working for the BBC (my fifth job) and starting to get sent on foreign reporting assignments.

A couple of years later a life-changing offer came. Would I move to New York and set up a TV news bureau? I’d be away for about three months.

The answer should have been thanks but no thanks. We’d just had our second child and moved to an old house badly in need of renovation. My wife was completely supportive. She always was.

She clearly needed me at home but she didn’t want to stand in the way of my career. So I said yes.

Three months was to become six years and my family came out to join me. But for all I saw of them they might almost have stayed in Britain.

My ‘patch’ was not just the States but the entire Americas, north and south, and I spent more time on planes and in hotels than I did with my family.

Eventually I told my boss I’d had enough and wanted to come home. He agreed.

But then the government in South Africa announced that they would let the BBC set up a TV news bureau in Johannesburg for the first time. He asked me to go there instead.

My wife’s reaction this time was a little cooler, but I talked her into it. After all, that was where the really big news was happening: not just apartheid in South Africa but the war in Rhodesia.

I tried to persuade myself that the family were thoroughly enjoying their lives abroad and it was me who was missing out.

I recall in sharp detail going off on one trip when my daughter was a baby. When I returned she had learned to walk. She was a toddler. I had missed that wonderful transition. That’s something you never get back.

And anyway the boss had promised me that when we did finally come home I’d have limitless time with my family because he wanted me to read the news. No foreign travel. No panic phone call on Christmas Eve because of an earthquake in Nicaragua.

But again he changed his mind. He asked me to stay on the road and become ‘world correspondent’. All the big stories would be mine. So yet again I agreed.

I stuck with it for a year, during which I was away from home for about eight months, and then finally the boss made good on his promise. I became presenter of the Nine O’Clock News.

But by then it was too late. My marriage was in ruins and my children were no longer children. They had effectively grown up without their father.

Do I regret that? It’s a question I’ve asked myself a thousand times — and in one important respect, I do.

In the early days my motivation was the financial security for my family that I’d never had as a child. But then the job had taken over. I chose to put my work first. I wasn’t working to live. I was living to work.

Obviously I recognise how phenomenally lucky I’ve been and I know I’m not typical. Then again, nobody is — except that we all need both work and leisure. It’s finding the balance.

Nearly a century ago the great economist, John Maynard Keynes, predicted that by now we would all be so rich we’d only need to work about 15 per cent of the time and could devote the rest to ‘living’.

He was dead right about us getting richer. In fact, we’ve exceeded his expectations. He was dead wrong about the balance between work and ‘living’.

But perhaps it’s just a question of time.