JOHN HUMPHRYS: We must help our paupers eat like the Prince

The first hour or so was fairly pleasant. It was a sunny day and plucking weeds from between the rows of tiny carrot seedlings wasn’t really hard work. The next hour was less pleasant, and then I made a big mistake.

I stood as straight as my aching back would allow and scanned the field. I had weeded maybe a quarter of one row. By a rough calculation if I continued at this rate I’d be drawing my old age pension by the time I’d finished.

This was the introduction to my dream of becoming an organic farmer. Weeding by hand in my allotment as a youngster was all very well but a 12-acre field of organic carrots on my Welsh farm was another matter. My dream did not survive its first contact with reality. 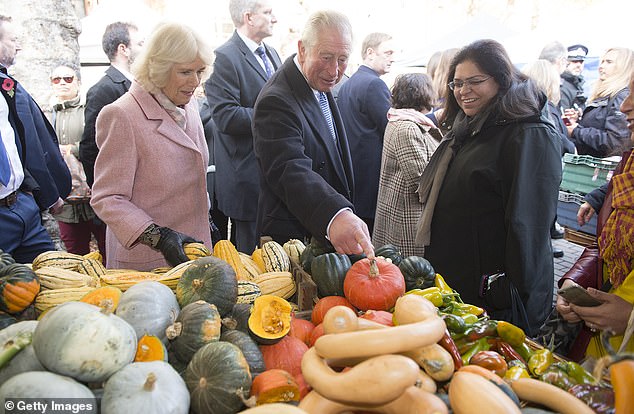 That was 40 years ago. Last week I stood in a field in Hampshire that made my 12 acres look like a pocket handkerchief.

The crop was beans and they were being grown both for food and to improve the fertility of the soil. The field had not been ploughed, nor will it be.

The vast drilling machine was controlled by satellites so accurate the operator could drill a row stretching around the planet and end up within an inch of where it started.

This is the face of modern agriculture. Prince Charles had something to say about it this week in a piece for the Future Healthcare Journal. He said many families chose low-quality meals because they’re much cheaper than healthy options.

Possibly — but it’s not as if they weigh up the different options. They buy what they can afford and what their children demand. And, yes, crisps and cola may be rubbish food and extremely unhealthy but if you’re a single mother living on benefits you’ve got to be pretty tough to force nourishing home-made soup down your kids’ throats.

Where he’s absolutely spot on is the link between good food and health. In a perfect world we’d all be dining on the finest produce his own organic farm can deliver, but the families he’s referring to don’t have that option. Nor will they ever — short of winning the Lottery.

So who is his message aimed at? Essentially the same targets he has been attacking for most of his adult life: Manufacturers of highly processed food. The system that encourages supermarkets to offer less healthy food ‘because it is cheaper’. Above all, farmers who have increased the yield from their land by drenching it in toxic chemicals, destroying the precious ecosystem in the process.

The trouble is, it’s worked. Arable farmers today deliver yields their fathers, let alone their grandfathers, could not have dreamed of.

But not for much longer. The reckoning is near. Our soil is almost dead. The uncountable trillions of microscopic creatures and worms that created it aeons ago are being wiped out. Even cautious scientists believe we have only a limited number of harvests left.

Within the lifetimes of our children our soil will be dead. Unless we do something now.

The obvious solution is to ban intensive agriculture and embrace an organic system. Obvious and unworkable. It would deal with Charles’s worries about cheap food. Prices would go through the roof as yields collapsed.

Two of my oldest friends, Patrick Holden and Peter Segger, bear the blame for my own quixotic but doomed attempt at organic farming. They succeeded where I failed and became pioneers of what was then a moribund organic movement. Thanks to them and a few others we can buy organic food across the country. But even they acknowledge that we cannot simply ban all agro-chemicals.

And that takes us back to my high-tech farmer in Hampshire. Before he took over five years ago it was a typical arable farm producing a lot of grain with a lot of chemicals. Generous subsidies bolstered the balance sheet. In the past five years he has cut his use of chemicals by nearly a third without reducing his harvests, using a blend of technology and tradition.

The technology comes from the satellites up there in space, the ability to plant crops without a plough, and the robots yet to come. There are four: Tom, Dick and Harry. Tom will scan the fields as it trundles across them, identifying weeds and undesirables. Dick will use an electric zapper to kill the weeds and Harry will plant next year’s crop.

Oh . . . and then there’s Wilma, who is the artificial intelligence ‘brains’ of the operation because she pulls everything together and tells the farmer what to do.

No chemicals. No heavy tractors compacting the earth. No ploughing the soil and releasing vast amounts of carbon into our dangerously over-heating atmosphere. Covering the soil while it waits to be sown with crops is a dense mat of little plants which act like mini solar panels. They capture the sunlight and turn it into sugar to be gobbled up by grateful worms.

And while that happens underground, sheep wander above, grazing on the cover crops and depositing copious amounts of vital dung. It is what nature, left to her own devices, has been doing since agriculture began. It is what gives good food its nutritional value.

The fashionable term for it these days is regenerative agriculture. Critics say it does not go far enough and they’re right. Farmers can still, for instance, use Roundup, which includes the deadly chemical glyphosate. It kills weeds, but also kills countless micro-organisms in the soil which affects the health of the plants and ultimately the people who eat them.

The International Agency for Research on Cancer has found it can cause cancer in humans, too.

But there are two big signs of hope. The days have gone when organic farmers were sneered at by the ‘conventional’ farming industry as sandal-wearing hippies. At least in public. Dinosaurs who thought good farming began and ended with the nozzle of a chemical sprayer know they lost the argument. And the Government finally recognises the link between good food and good health.

Henry Dimbleby leads the National Food Strategy initiative. Its aim is to deliver ‘safe, healthy, affordable food regardless of where people live or how much they earn’.

Its final report will lead to a White Paper by the end of the year. But Dimbleby has a huge job on his hands. NHS figures show about two-thirds of us are overweight or obese. Hospital admissions directly attributable to obesity approached 12,000 in the year before Covid.

A third of children are classed as overweight or obese. The poorest are three times as likely to be obese as the better off. Factor in diabetes and heart disease and a dozen more ailments and the link between good food and good health is irrefutable.

So what’s next? An easy win is to ban waste. Forcing farmers to dump perfectly good carrots that are too long or beetroot that’s a funny shape is an obscenity. We should boycott any supermarket that does not stock ugly veg.

We should come down hard on manufacturers whose processed food is about as nutritious as a slab of cheap chocolate. Or its wrapper. And help that hard-pressed mother in the tower block who struggles to give her children decent food.

Economists say it’s better to subsidise consumers than producers so let’s do more of it. Poor parents can claim Healthy Start vouchers to exchange for milk, yoghurt, fruit and vegetables, but only until a child is four. Why not make it 14 instead?

Yes, it will cost taxpayers a few quid. But the real cost of obesity to wider society including the NHS, is reckoned to be £27 billion. You can buy an awful lot of organic carrots for that. Even if I couldn’t grow them myself.