President Biden’s climate envoy said frozen Russian land is ‘thawing’, Putin’s ‘infrastructure’ is ‘at risk’ and urged the Russian tyrant to ‘help us to stay on track with respect to what we need to do for the climate.

The clip surfaced just hours after Russian forces moved into Ukraine from the north, south and east and unleashed devastation on Ukraine. It’s not clear when the interview was filmed.

On Thursday afternoon, Russian forces fought for control of the Chernobyl exclusion zone, 60 miles north of the capital Kiev, amid fears the battle could damage storage facilities holding nuclear waste sparking a fallout that could blanket Europe.

‘I thought we lived in a world that had said no to that kind of activity. And I hope diplomacy will win,’ Kerry added.

‘So, you know, I think hopefully President Putin would realize that in the northern part of his country, they used to live on 66 percent of the nation that was over frozen land’.

‘Now it’s thawing, and his infrastructure is at risk,’ he added. ‘And the people of Russia are at risk. And so I hope President Putin will help us to stay on track with respect to what we need to do for the climate.’

Members of the GOP were quick to jump on the timing of Kerry’s comments.

Republican Senator Ted Cruz said: ‘As war breaks out in Europe & casualties mount, a terrifying look into the ALWAYS politicized priorities of the Biden-Harris administration.’ 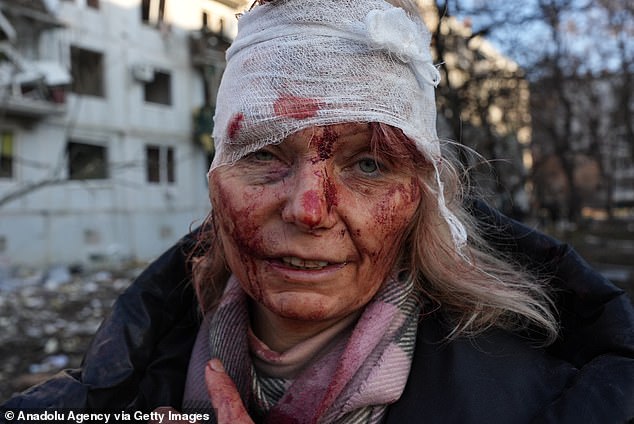 A wounded woman is seen as airstrike damages an apartment complex outside of Kharkiv, Ukraine

Republican Senator Ted Cruz said: ‘As war breaks out in Europe & casualties mount, a terrifying look into the ALWAYS politicized priorities of the Biden-Harris administration’

Republican Rep. August Pfluger of Texas said: ‘Putin is killing innocent Ukrainians and John Kerry is asking him to stay ‘on track’ for the climate? Despicable’

Republican Rep. August Pfluger of Texas said: ‘Putin is killing innocent Ukrainians and John Kerry is asking him to stay ‘on track’ for the climate? Despicable.

‘Russian energy is some of the worst for the environment. The Biden Admin climate religion has made our world less safe.’

Kerry asserted that the focus on climate change was still important during the vicious standoff between Ukraine and Russia earlier this week.

Egypt will host the COP27 climate conference in November and Kerry said the task for this year was to bring more countries on board to set ambitious climate goals as well as implementing pledges made at COP26 in Glasgow.

‘We meet this morning in Egypt well aware of other tensions in the world, understanding that there are lives and principles at stake in what is happening with respect to Ukraine today,’ Kerry told reporters after meeting Egyptian Foreign Minister Sameh Shoukry.

‘But that does not change the reality of what is happening every day with respect to our climate. That is a national, international security threat to all of us.’

Egypt and the United States have created a working group to set priorities for COP27 and to support Egypt’s energy transition, Shoukry and Kerry said.

Elsewhere Kiev ordered civilians to go to bomb shelters and declared a curfew amid fears Russia is about to strike the Ukrainian capital as Kiev’s troops lost control of a key airfield around 15 miles away. Russian forces had attacked it with around two dozen attack helicopters earlier in the day, four of which are thought to have been shot down.

‘They are going to bomb Kyiv now. Authorities told us to hide in shelters,’ a source in the city told MailOnline as authorities said a hospital had been hit, killing four people.

The Ukrainian army was this afternoon fighting in almost every region of the country, battling the Russians for control of military bases, airports, cities and ports from Kharkiv to Kiev, and Donetsk to Odessa.

It came after Vladimir Putin personally gave the order to attack around 5am, unleashing a salvo of rocket fire that American intelligence said involved more than 100 short and medium-range ballistic missiles, cruise missiles and surface-to-air missiles, and 75 bombers that targeted military sites including barracks, warehouses and airfields in order to knock out the country’s military command structure. 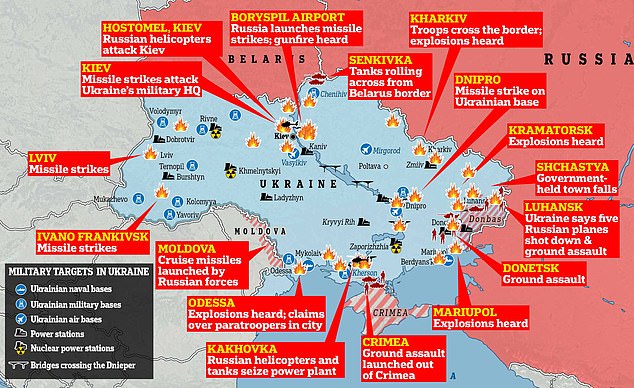 The attack has come to Ukraine on all fronts, with bombs and missiles striking targets across the country, ground forces rolling in from Belarus, Crimea, Donetsk and Luhansk, and paratroopers dropping on Kharkiv 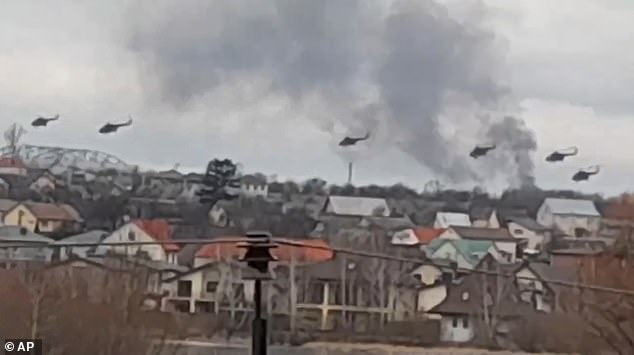 Russian Mi-8 attack helicopters stage an assault on Gostomel air base, just on the outskirts of Kiev, after Vladimir Putin launched an all-out attack on the country 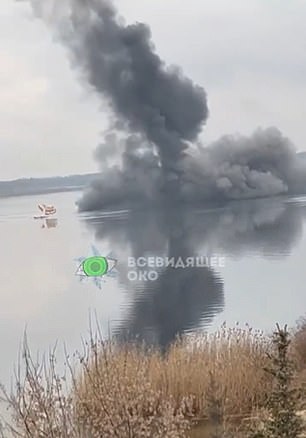 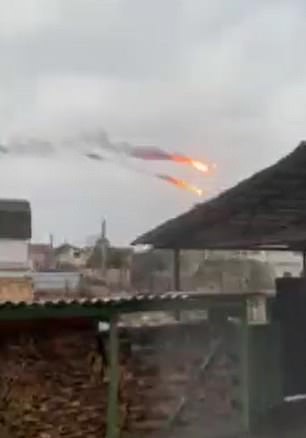 A Russian helicopter is shot down somewhere over Kiev (left), while the wreckage of what appears to be a jet falls from the skies near the capital (right) 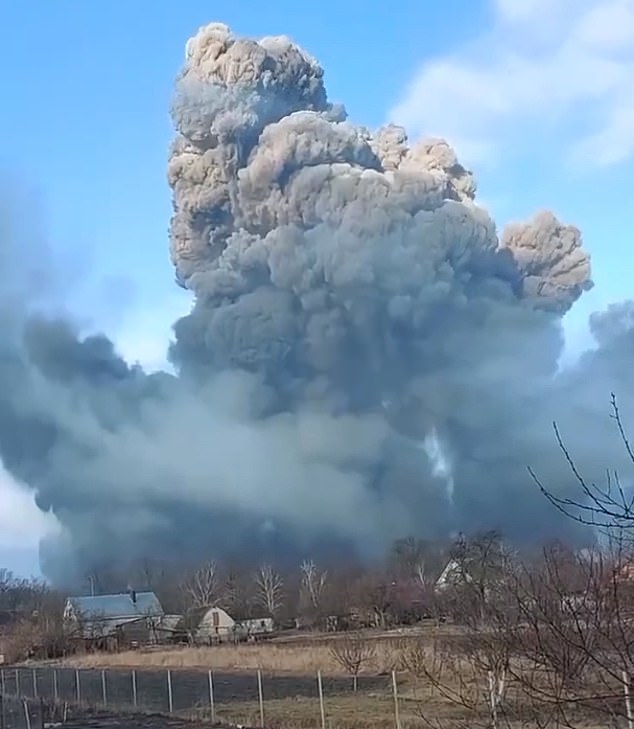 A huge explosion is seen at Vinnytsia military base, in central Ukraine, as the country comes under all-out attack by Russia 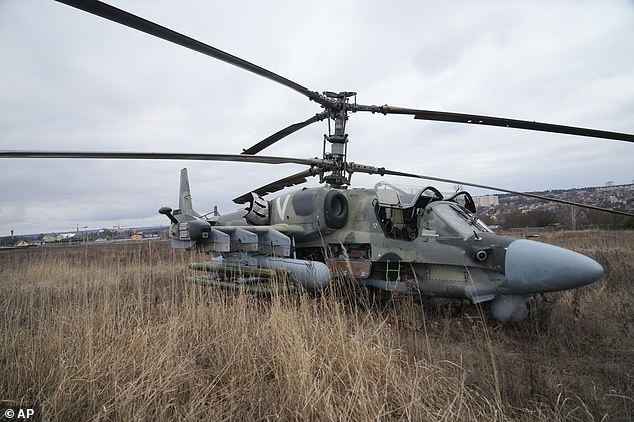 A Russian Ka-52 helicopter gunship is seen in the field after a forced landing Kyiv, Ukraine