John Leslie grabbed woman’s breasts because he was excited to be at celebrity party after years out of the spotlight, friend of ‘victim’ tells court

Ex-Blue Peter presenter John Leslie groped a woman because he was ‘excited’ to be at a celebrity party after several years out of the spotlight, a court heard today.

A friend of the woman who says her breasts were grabbed by the 55-year-old former star at a Christmas bash said one of the presenter’s friends ‘apologised’ on his behalf.

The alleged non-consensual touching is said to have taken place in London’s West End on December 5, 2008.

The woman appeared via video link to give her evidence.

Ex-Blue Peter presenter John Leslie, pictured arriving at Southwark Crown Court in London, groped a woman because he was ‘excited’ to be at a celebrity party after several years out of the spotlight, it was claimed today

She said she saw Leslie, accompanied with a blonde woman, walk through the door that evening.

She said: ‘I was introduced to John and his friend there. I thought they were in front of me.

‘It was a very good atmosphere. People were talking. It was very friendly, very nice.

‘It was during this interaction that something happened between John and [my friend].

‘I believe he did something to violate [my friend] in the bar.

‘I can’t be exactly sure what I saw but what I certainly heard was the aftermath of what happened and saw the shock and heard the shock from [my friend].

‘John’s demeanour didn’t change, he was still very excitable and very happy to be there. But there seemed to be a sudden shift in atmosphere from [my friend] and it was almost disbelief – an appalled feeling.’ 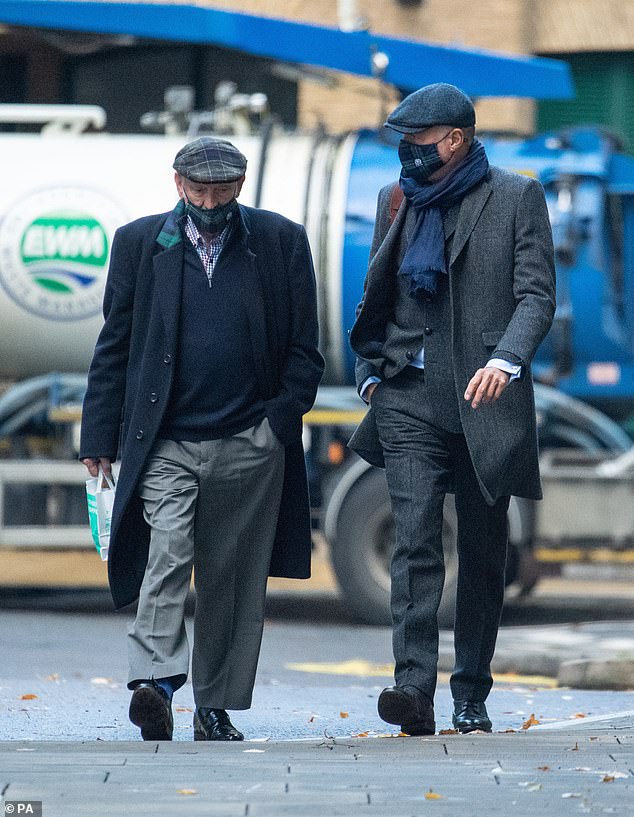 Leslie, who wore a black suit, blue shirt and navy spotted tie, denies sexual assault and was supported in court by his father, Les Stott, pictured together

She added: ‘There was a shock and a disbelief that was slightly measured and tempered but not long after that John and his friend left she said something like, ‘did you see that or can you believe that happened?”

The witness continued: ‘I’ve got a recollection of John’s companion approaching me towards the end of the evening, when we were in the bar area, and apologised on John’s behalf.

‘This is the gist rather than the exact words, but she said like, ‘sorry about John, he’s very excited to be here it’s been a long time since he’s been to a party like this and sometimes he just gets excited and goes over the top.’

‘I don’t think it went on for a long time. If I did respond, I placated her.. I said I’m sure it’s ok rather than challenging anything.’

Southwark Crown Court heard the alleged victim did not speak to the police in 2017 until she remembered that her friend was there.

She said: ‘There was a point when [my friend] was talking to me about reporting it to the police, and the police weren’t continuing their enquiries with it. I reminded her I was there that evening.

‘I think I had assumed that she had remembered that I had been there, but she must have forgotten.’

Leslie, who wore a black suit, blue shirt and navy spotted tie, denies sexual assault. He was supported in court by his father, Les Stott.