John McEnroe has hung up on radio shock jock Neil Mitchell following a fiery interview about the tennis legend’s protest of the naming of Margaret Court Arena.

Mitchell’s interview on Thursday with McEnroe was tense from the get-go with the veteran broadcaster telling McEnroe some viewed the protest as ‘insulting Australia.’

When asked if he regretted the protest McEnroe responded by saying it could have been done better and more effectively.

‘But in terms of regret doing it, no. I apologised because I haven’t been one to have perhaps read the rule book as good as I could have. I was unaware there were certain protocols that needed to be followed.’

Both McEnroe and Navratilova publicly apologised after Tennis Australia said they had broken protocol with the protest.

‘A lot of the letter writers and reaction from the public is ‘this insulted Australia’. What’s your reaction to that?’ Mitchel asked.

‘I think that’s a little going overboard, personally… I don’t see where you can take it to that level,’ McEnroe responded.

Mitchell then stated he did not agree that Court is homophobic and that it is a complicated issue and he does not like ‘name calling.’

‘I would absolutely be open to discussing it with her,’ McEnroe said.

‘It is complicated. The sponsors of the Open, Emirates, you’ve played yourself in Dubai,’ Mitchell said.

‘What about China? You could name a ton of countries where their policies are, in my book, horrific. I think there should be discussion about that as well. I couldn’t agree with you more,’ McEnroe said.

Mitchell then asked if some countries should be banned from the tennis circuit because of their social policies.

‘I didn’t say we should ban them. But it should be discussed that they treat women for example, Saudi Arabia for example and the way that they treat them or the other places in the Middle East, are we encouraging that or accepting that?’ 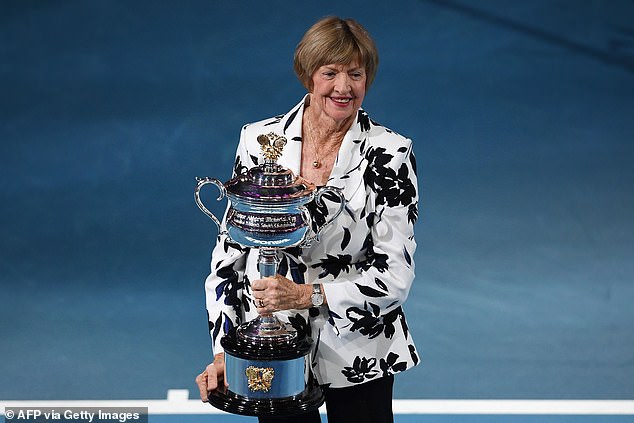 The protest centres around Margaret Court’s, who won 24 grand slam titles for Australia, outspoken views on gay marriage and transgender athletes (Court is pictured on Monday being honoured for the 50-year anniversary of her Australian Open win)

Mitchell then asked if Tennis Australia had threatened McEnroe’s accreditation over Tuesday’s protest.

This seemed to provoke the fiery temper McEnroe is famous for.

‘As far as I know, that wasn’t threatened. Perhaps if there is more people like you, maybe they will reconsider it… it seems like you’re insinuating they should do more,’ he said.

‘I’m not. And I can tell you I’ve been one of the strongest supporters of marriage equality in this country,’ Mitchell said.

A fiery back and forth then followed after McEnroe questioned if this was true.

‘Listen mate, I’ve got a match in a little bit. It’s OK to disagree with me but you don’t have to try to like, you know, with the way you’re talking to me, it seems like you’re looking for trouble,’ he said.

The interview then quickly wrapped up with Mitchell telling McEnroe to ‘enjoy the tennis’ and McEnroe hanging up. 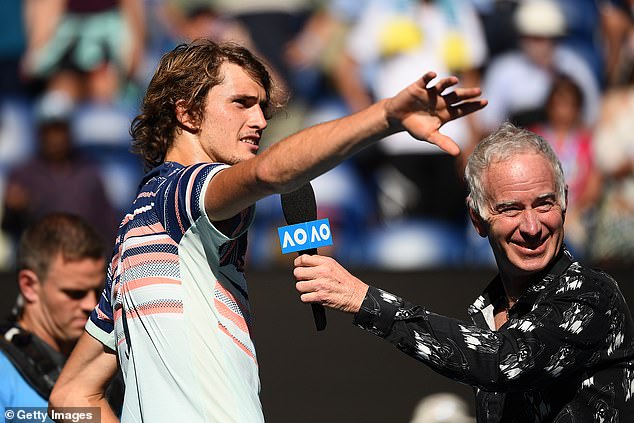