John Oliver tore into Megyn Kelly with a segment featuring some of the former host’s most controversial comments on the eve of her debut on ‘Today.’

The brief but efficient takedown aired on Sunday night’s episode of ‘Last Week Tonight’ in response to an NBC promo for ‘Megyn Kelly Today’ where the host at one point states: ‘In a world and a country that is incredibly divided right now, my hope is that this show can be a unifying force.’

Oliver responded to that statement with a two-minute clip that showed Megyn repeatedly labeling African-American men as ‘thugs,’ angrily criticizing the ‘war on the religious right’ and interviewing Tony Perkins.

The homophobic head of the Family Research Council was welcomed onto Megyn’s shows more than 30 times over the years, and during one of those many appearances Megyn stated:’Gay rights are more and more protected in this country, Christian beliefs and Christian rights, not so much.’

Megyn decided to keep that fiery opinion to herself however on Monday morning when she welcomed the cast of ‘Will & Grace’ to her show.

Getting apolitical: ‘Last Week Tonight’ put together a clip package of Megyn Kelly making a number of controversial remarks during her time at Fox News (Kelly above in an NBC promo)

The clip started off with Megyn’s new ‘Today’ promo, which looks as though it was shot through a Vaseline-covered lens.

Then, after the aforementioned line is delivered by Megyn, a title card appeared that read: ‘And now, the “unifying force” that is Megyn Kelly.’

That was followed by Megyn interviewing Perkins and then appearing on Bill O’Reilly’s former Fox News program, where she stated: ‘This is about the war on the religious right, and not the war one women.’

Then it was time to see Megyn declaring that Santa is white.

‘For all you kids watching at home, Santa is just white,’ Megyn said of the fictional character.

Jesus was also a ‘white man’ according to Megyn, despite the fact that scientists and anthropologists almost universally agree that this was not the case.

These opinions were followed by a medley of Megyn chiming in over and over again about the ‘new Black Panther party.’

Megyn spoke about this group for weeks on her show back in 2010 while her guests suggested that the Obama Justice Department was involved in some way with their attempts at voter suppression.

This because the Justice Department decided to drop the voter intimidation case against some members of the group.

In the end however, the vote suppression she spoke of was two men standing outside a Philadelphia polling location in fatigues with a night stick, which while unacceptable was in no way a country-wide epidemic or cause or serious concern. 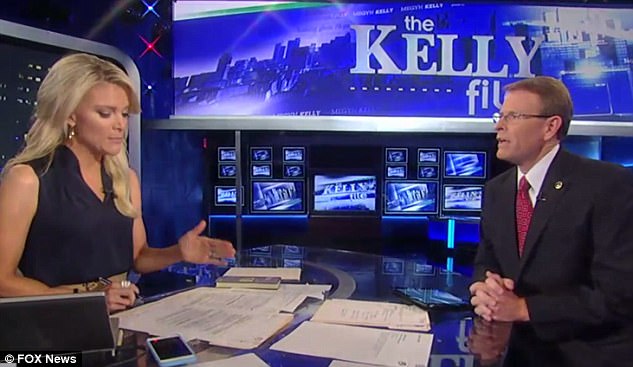 Hosting a homophobe: ‘Gay rights are more and more protected in this country, Christian beliefs and Christian rights, not so much,’ says Kelly in one clip to guest Tony Perkins (Kelly and Perkins above) 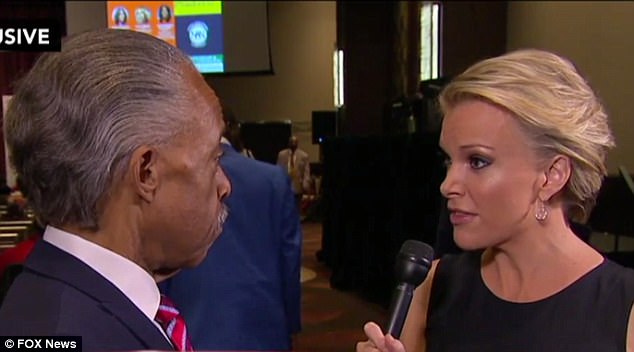 Enlightening exchange: The segment ended with Megyn denying Al Sharpton’s claim that she states her opinion on her show, with the host saying she cannot because she is a ‘journalist’ (above)

Megyn took aim at Black Lives Matter next, saying that ‘all lives matter’ a number of times on her show.

The clip then ended with an incredible exchange between Megyn and the Reverend Al Sharpton.

‘You get on TV and state every night what you believes,’ says Sharpton to Megyn in the clip, which was taken from an interview she did with the Reverend about the riots and unrest in Ferguson, Missouri.

A gobsmacked Sharpton then whips his head back with a look of pure shock on his face, asking: ‘You don’t?’

Megyn says once again that she does not, to which Sharpton replies: ‘Well I do.’

That is when Kelly interrupts to say: ‘I know cause you’re an opinion guy, I’m a journalist.’ 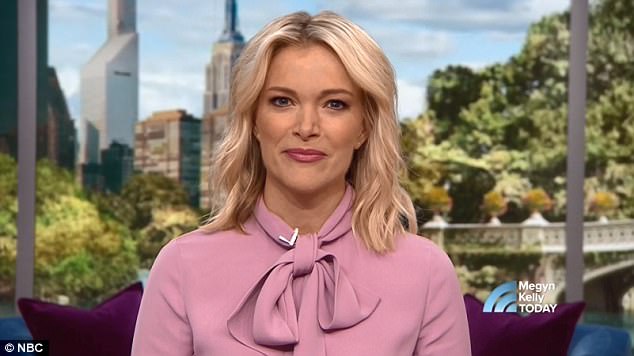 Top of the morning: Megyn in an $1100 Gucci pussy bow blouse on Monday for the premiere of her new show (above)

On Monday, Megyn welcomed her studio audience and spoke about her experience transitioning from the anchor of a prime time news program to her own early morning show.

Megyn got emotional at one point as she poignantly spoke about her late father, and how she searched for a sign from him when trying to decide if she should make the move to NBC.

That bit included a plug for her memoir ‘Settle For More,’ one of many times the books got some free press on the program.

Megyn was joined by her mother in the audience and also got a surprise appearance from husband Douglas Brunt, who just happened to be in attendance with a bouquet of roses for his wife.

Megyn said that his stopping by the show was a big deal because he is such a private person, this despite the fact that he has also made multiple appearances on ‘Today’ over the past few months to help his wife promote her new shows.

That first first show, ‘Megyn Kelly Tonight,’ premiered back in June on NBC, and ended being a ratings failure for the network.

In its timeslot it lost time and time again to repeats of the CBS juggernaut ’60 Minutes’ as well the ABC family program ‘America’s Funniest Home Videos.’