Chief Justice John Roberts declined to read a question from Republican Senator Rand Paul on Thursday that would name the alleged whistleblower.

Roberts looked at the card containing Paul’s question carefully and then set it aside and said: ‘The presiding officer declines to read the question as submitted.’

‘I can tell you that my question made no reference to the whistleblower or any kind of person,’ the senator from Kentucky said. 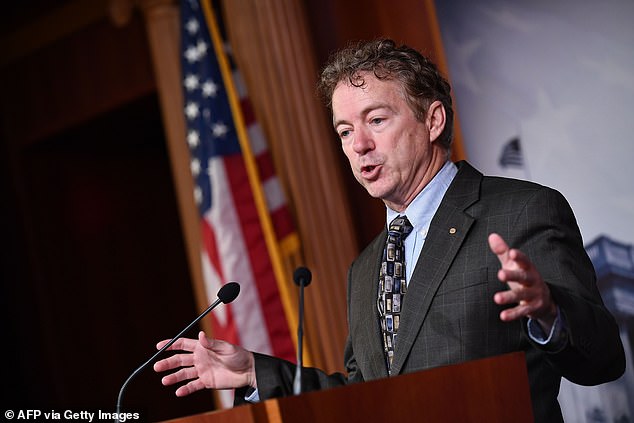 He read his question to the press but DailyMail.com is not naming the alleged whistleblower, whose public identity has not been disclosed.

Here is Senator Paul’s question with the names in it redacted: ‘Are you aware that House Intelligence Committee staff … has a close relationship with … when at the National Security Council together. Are you aware and how do you respond to reports that … and … may have worked together to plot impeaching the president before there were formal House impeachment proceedings?’

Roberts – who is tasked with reading senators’ questions aloud – had told the lawmakers he would not say the name of the whistleblower during the Q&A session. The person has not publicly identified themselves and is protected by federal law from having their identity revealed.

Democrats don’t want the whistleblower named publicly to protect the person and several Republicans agree with them.

Republican Senate Leader Mitch McConnell appeared to reassure Roberts the lawmakers would support his position amid reports Paul was going to try to name the person in his question.

‘We appreciate the judge reading our questions, and I want to continue to assure him that that level of consideration for him will continue,’ McConnell said before the Q&A period began.

But Paul made his inquiry and then left the trial to talk to the press.

‘I don’t know who the whistleblower is,’ Paul told reporters.

‘My question is not about the whistleblower. My question is about two people who are friends who work together the National Security Council, who are having overheard talking about impeaching the president years in advance of a process that then was created,’ he said.

He was asked if he shouldn’t be in the trial instead of holding a press conference.

‘Yeah, I will be there very shortly. Thanks for the question,’ he said. 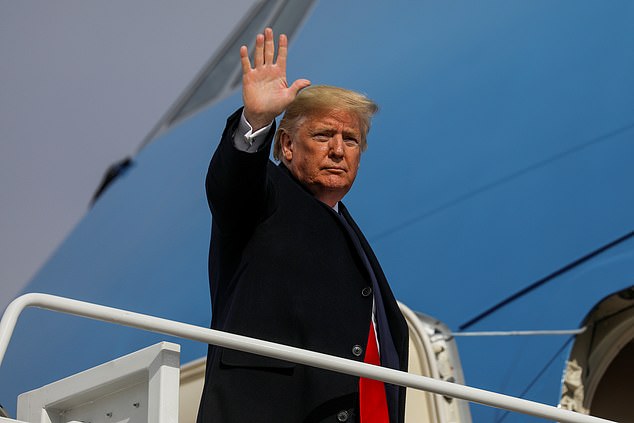 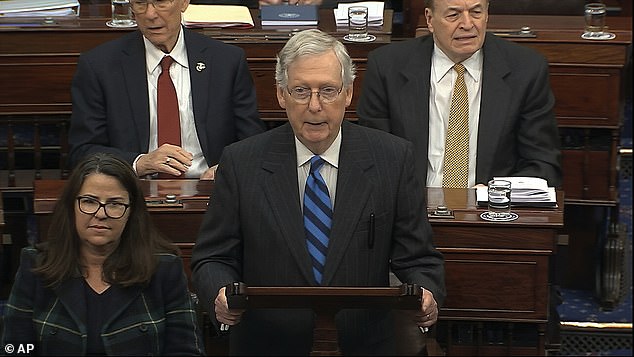 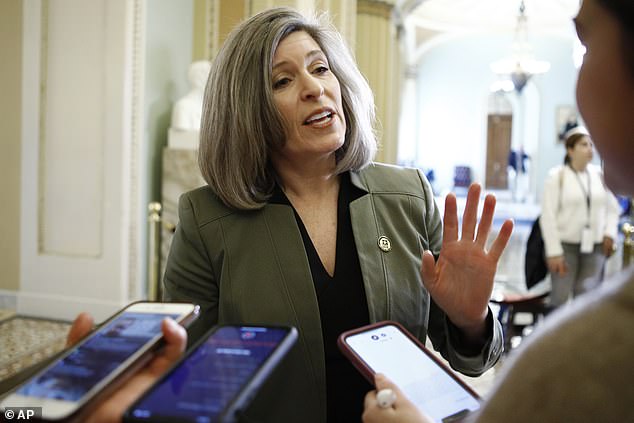 Paul’s move got the second day of the Senate question and answer period off to a fiery start.

Senators have another eight hours to make their inquiries as they prepare for the big question hanging over their heads: will additional witnesses be called.

McConnell is expected to begin the debate on the witness issue on Friday and questions remain how that conversation will go.

There are discussions about having a closed-door session for either the witness debate or the final debate on whether or not to acquit President Trump or possibly for both.

‘I think they could have closed door deliberations,’ Senator Joni Ernst told reporters on Thursday morning.

The president’s legal team made the repeated argument in Wednesday’s 10-hour session that calling witnesses will drag the trial out for months and risks turning the Senate into a permanent court of impeachment, preventing the senators from doing an legislative work.

And questions arose over what would happen should there be a 50-50 votes for witnesses – which could happen if three Republicans join Democrats in supporting the issue. Would Chief Justice John Roberts break the tie?

The question arose after Cory Gardener, the Colorado senator who is seen as having the toughest re-election battle in November, said he would not vote for witnesses.

That left moderate Republican Senators Mitt Romney, Susan Collins and Lisa Murkowski, who have indicated an interest in hearing from witnesses. But Democrats need four Republicans to have the 51 votes needed.

McConnell wants a speedy trial with no witnesses. A vote on the matter is likely to take place Friday. Asked Thursday Morning by ABC News if he feels confident about that vote, he replied: ‘I always do.’

On Friday, there could be four hours of debate on the witness issue with the time divided evenly between two hours for each side.

Republican senators held a private meeting Thursday morning before the trial began to talk about next steps.

The big question is what happens if there is a 50-50 tie for witnesses and whether or not Roberts would break the tie.

Republican Senator Mike Braun said there was a lot of ‘uncertainty’ in that scenario but added lawmakers were confident that a simple majority – 51 votes – could over ride any decision by Roberts, the presiding chair in the Senate.

‘If there’s a tie there’s a lot of uncertainty in terms of what happens with presiding officer, especially with the chief justice, and the one technicality I think I’m clear on is that the Senate with 51 votes could override the chair,’ Braun said.

He said the mood among senators was ‘suspenseful.’

Trump’s defense bluntly threatened that if the Senate votes for John Bolton, the former national security advisor, to give evidence, they would demand Hunter Biden, the whistleblower, Adam Schiff and potentially many more be called too, tying the Senate up for months.

Without witnesses, the trial could end as early as Friday. President Trump is expected to be acquitted in the Republican-controlled chamber. It would take a vote of two-thirds of the senators to convict the president.

‘We don’t have a timeline. I think it’s very dependent upon some of the motions that might come up,’ Ernst said.

Senators have an additional eight hours to ask questions in Thursday’s session. A total of 93 were asked on Thursday.

Meanwhile, Alan Dershowitz, one of Donald Trump’s lawyers, took to Twitter Thursday to refute interpretations of a comment he made during Wednesday’s session where he argued any action taken by the president to benefit his re-election is in the public interest and therefore not impeachable.

It was astonishing argument for sweeping executive power made by the famous law professor.

But on Thursday Dershowitz disputed the interpretation of his words.

‘They characterized my argument as if I had said that if a president believes that his re-election was in the national interest, he can do anything. I said nothing like that, as anyone who actually heard what I said can attest,’ he wrote on Twitter.

Several Democrats used the social media platform to snap back at him.

‘You said as long as the President doesn’t commit a crime, he can abuse his power in any way he likes in service of his re-election. He can trade taxpayer aid for foreign interference. He can sick law enforcement on his political rivals. I was there. That’s what you said,’ Democratic Sen. Chris Murphy tweeted. 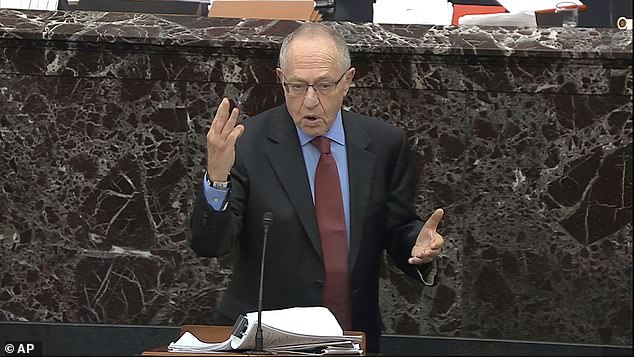 Alan Dershowitz, one Donald Trump’s lawyers, argued any action taken by the president to benefit his re-election is in the public interest 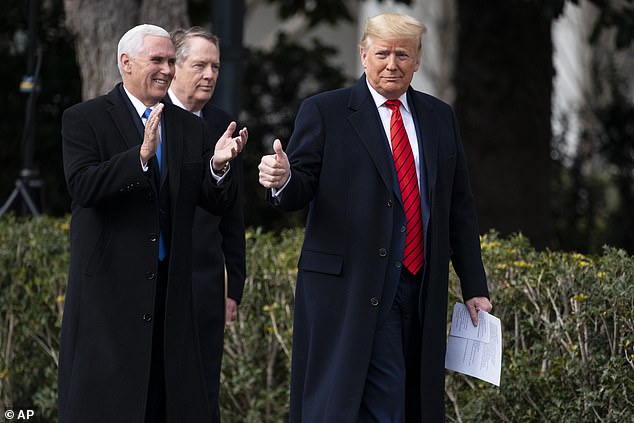 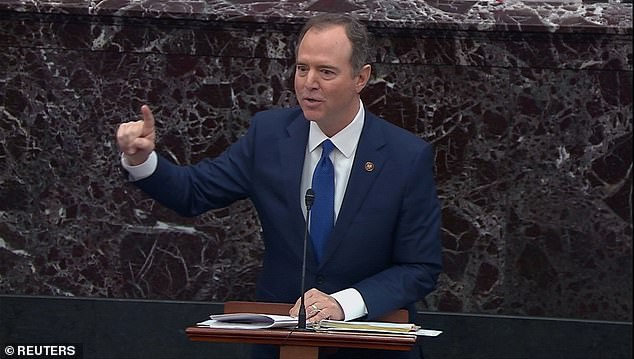 The assertion was interpreted any action taken by a president in pursuit of his re-election campaign would not impeachable and nothing a president did would be an abuse of power, which is one of the articles against Trump.

‘If you say you can’t hold a president accountable in an election year where they’re trying to cheat in that election, then you are giving them carte blanche,’ he said. ‘All quid pro quos are not the same. Some are legitimate and some are corrupt.’

The query about quid pro quos and their legality came after Republican Senator Ted Cruz asked: ‘As a matter of law, does it matter if there was a quid pro quo? Is it true that quid pro quos are often used in foreign policy?’

Dershowitz answered for the president’s team, his first time speaking on the Senate floor Wednesday.

‘The only thing that would make a quid pro quo unlawful is if the quo were in some way illegal,’ he said.

‘It would be a much harder case if a hypothetical president of the United States said to a hypothetical leader of a foreign country, unless you build a hotel with my name on it and unless you give me a million dollar kick back, I will withhold the funds. That’s an easy case. That’s purely corrupt and in the purely private interests,’ he noted.

Senators started their question and answer session Wednesday with Democrats going straight to John Bolton, the president’s former national security adviser they want to testify in the trial. Republicans focused on the legal and technical aspects of impeachment in their first questions. 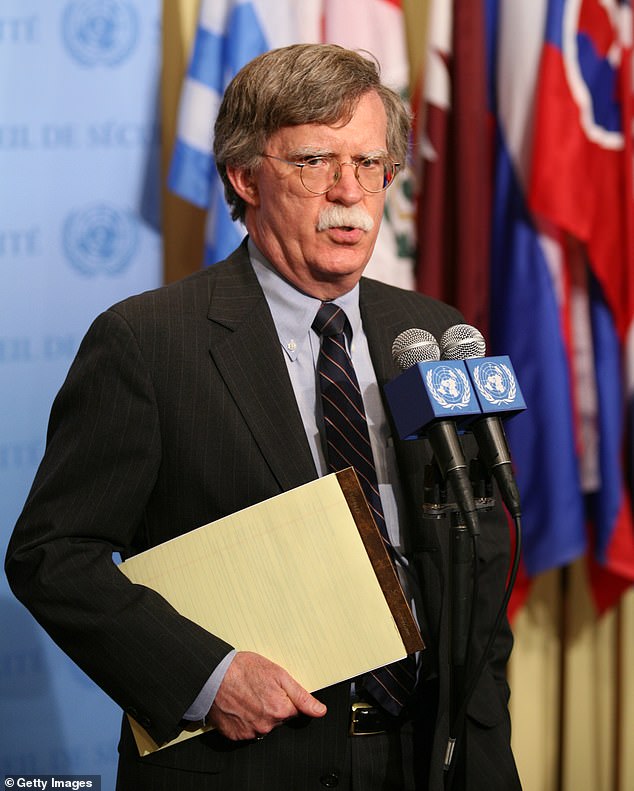 Both in their questions and in the House impeachment managers response, Democrats made the case over and over again to hear from Bolton.

Bolton turned the trial on its head when The New York Times published revelations from his forthcoming memoir, ‘The Room Where It Happened,’ that claimed Trump was with holding nearly $40 million in U.S. aid to the Ukraine until the country agreed to investigate the Bidens.

But Democrats repeatedly argued senators have a chance to hear from a fact witnesses if they call Bolton.

‘The important thing is that you can get a witness who talked to the president firsthand about what the president thought he was doing,’ Rep. Zoe Lofgren reminded senators during the proceedings.

Schiff reminded senators if they ‘have any question about the president’s motivation’ in with holding U.S. aid to the Ukraine, to subpoena Bolton.

‘Don’t wait for the book,’ he told senators, ‘to find the answer for your question.’

White House deputy counsel Patrick Phil told senators if they called witnesses, the Senate would be ‘effectively paralyzed’ for months.

‘It’s not just a question of, should we hear one witness,’ he said.

He pointed out it would drag out because in addition to Bolton, President Trump would want witnesses of his own. The president has said he’d like to hear from Hunter Biden and the whistleblower.

‘It’s not a question of a lot of people talk right now about John Bolton, but the president would have the opportunity to call his witnesses, just as a matter of fundamental fairness. And there would be a long list of witnesses if the body were to go in that direction. It would mean this would drag on for months and prevent this chamber from getting its business done,’ he said.

He also argued the president needed the confidentiality of his advisers so he could get the best, most candid advice, arguing executive privilege should be respected.