A woman who was awarded $57 million in a lawsuit against Johnson & Johnson is the first person in the United States to speak out about the severe pain she suffered from the faulty vaginal mesh implant.

Ella Ebaugh, 51, has had three surgeries since getting the implant because the mesh eroded into her urethra. But it still isn’t completely gone.

Vaginal mesh, or pelvic mesh, is implanted by surgeons to help with pelvic organ prolapse and urinary problems in women.

But recently, Johnson & Johnson and other companies who sell these implants have seen a rise in lawsuits that the mesh is causing serious problem such as abdominal pain, vaginal pain and an inability to have sex.

Ebaugh, from Pennsylvania, was awarded the money from a jury in Philadelphia after they found the company to be negligent and its product defective, according toCBS News.

More lawsuits remain, though, as thousands of women nationwide say they too are experiencing problems with the popular device.

Ella Ebaugh, 51, was awarded $57 million after her vaginal mesh implant caused her extreme pain and burning. Johnson & Johnson is under fire for selling multiple types of implants on the market that have caused women various health problems

She told CBS that the mesh eroded into her urethra and forced her to get surgery three times to repair the damage.

But some of the mesh is still embedded in her body and causing extreme pain.

Ebaugh got the implant after having five children and suffering from urinary incontinence, which means involuntary urine leakage.

Urinary incontinence is a common reason why hundreds of thousands of women worldwide have received the implants.

But Ebaugh has had nothing but pain and discomfort since she opted for the surgical solution.

‘I feel like I’m on fire you know down there,’ she said.

Since the surgery she has also experienced horrible pain when she sits and stands.

Ethicon, the creator of mesh product Ebaugh received, is planning to appeal the verdict.

‘Ethicon is confident in the positive impact our pelvic mesh products have had. The use of mesh to treat stress urinary incontinence is supported by medical experts, medical societies, physicians and regulatory organizations around the world,’ the company said in a statement.

This isn’t the first lawsuit Johnson & Johnson has experienced for the controversial mesh implants.

They were told to pay $20 million to a woman in New Jersey last month because of her own pain from a TVT-Secur vaginal mesh insert. 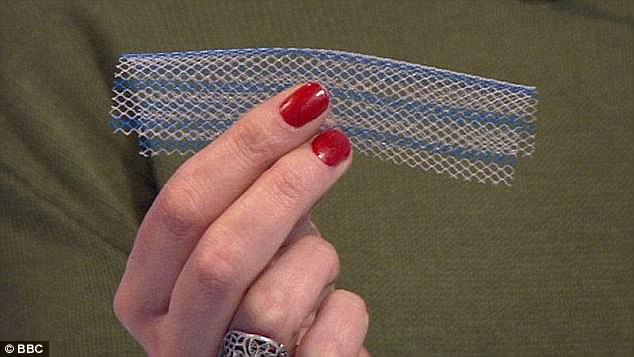 Mesh implants are used to help women with pelvic organ prolapse and urinary problems. These devices are commonly implanted when a woman gets older or has given birth

This insert also eroded in her body forcing her to undergo multiple surgeries to remove it.

Johnson & Johnson now faces more than a thousand lawsuits nationwide as more women come forward saying that they also have experienced severe problems with their own surgeries.

And this problem isn’t just in the United States.

Women in the UK have spoken against the implants saying they also are experiencing discomfort and pain from their own surgeries.

Five years ago, Johnson & Johnson stopped selling four of its mesh inserts after people said they were faulty.

But medical experts still claim that the mesh inserts are safe and effective for women help treat pelvic and urinary problems.

Yet, a study by Case Western Reserve University found that up to 42 percent of patients experience side effects.

Of which, 77 percent report severe pain and 30 percent claim to have a lost or reduced sex life.

Urinary infections have been reported in around 22 percent of cases, while bladder perforation occurs in up to 31 percent of incidences.

She said: ‘Less than 40 percent of surgeons report vaginal mesh implant side effects.