Prince Charles’s biographer Jonathan Dimbleby came under fire yesterday after launching an impassioned defence of him over the cash-for-honours scandal.

Barely challenged in a BBC interview, the long-time friend and confidant appeared to play down the furore over allegations that an official at one of the prince’s charities had offered to help a Saudi billionaire get a knighthood and British citizenship in exchange for ‘generous’ donations.

Mr Dimbleby, 77, was later accused of sycophancy and of making an ‘insulting’ comparison between the scandal and the Prime Minister’s false claim that Labour leader Sir Keir Starmer had failed to prosecute paedophile Jimmy Savile.

The journalist launched his attempted defence of Charles after Scotland Yard announced it was investigating claims that the prince’s former aide Michael Fawcett allegedly offered to help Saudi tycoon Mahfouz Marei Mubarak bin Mahfouz upgrade his honorary CBE to a knighthood – and to support his application for British citizenship – in exchange for ‘generous’ donations to Charles’s charitable foundation.

Royal insiders have denied the heir to the throne had any knowledge of the alleged deal, and said he would be willing to speak to police and help their inquiry.

Mr Dimbleby said he found media coverage of the scandal ‘frankly bizarre’. He dismissed coverage that claimed the police investigation was a ‘bombshell’ for the Royal Family as a cynical attempt to sell newspapers. 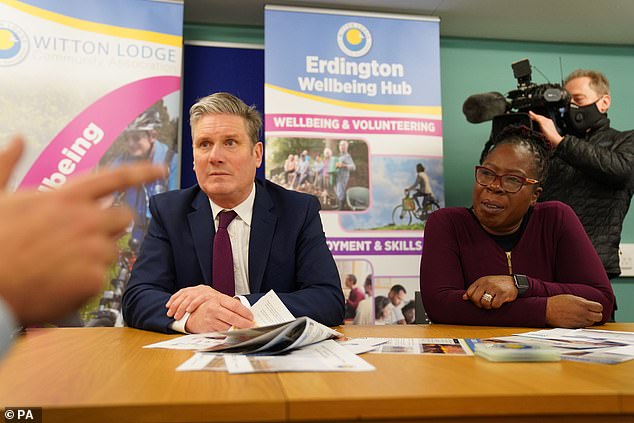 Mr Dimbleby, 77, was later accused of sycophancy and of making an ‘insulting’ comparison between the scandal and the Prime Minister’s false claim that Labour leader Sir Keir Starmer (pictured left) had failed to prosecute paedophile Jimmy Savile

He told Radio 4’s Today programme: ‘I think it’s extraordinarily unlikely that he knew. I think if he had known he would have immediately taken action about it.

‘If there has been some scam, some breaking of the law, you honestly think that he would have been party to that? It beggars belief.’

He presented the 1994 documentary in which the prince admitted to adultery during his marriage to Princess Diana.

During his six-minute interview yesterday, conducted by Today presenter Nick Robinson, Mr Dimbleby was allowed to insist that Charles would not have known about Mr Fawcett’s alleged dealings with Mr Mahfouz.

He heaped praise on the prince’s ‘very important work’ with his charities. But he then said that the heir to the throne had no direct responsibility for them, and that their day-to-day work was handled entirely by trustees and officials.

Mr Dimbleby scoffed at the idea that Mr Fawcett – Charles’s former valet and previously one of the most powerful figures in his court – would have told him about any alleged offer to help Mr Mahfouz with his citizenship or a knighthood and likened the case to Boris Johnson’s slur against Sir Keir, a former Director of Public Prosecutions, over Savile.

‘[Sir Keir] was effectively the chief executive of a large organisation,’ he said. ‘The Prince of Wales is not in that position, he is someone outside the organisation who cares and believes in its work, but is not party to its day-to-day operation.’

He attacked the media – including the Daily Mail – for reporting that news of the Scotland Yard probe broke only 48 hours after Prince Andrew’s out-of-court settlement with his sex abuse accuser Virginia Roberts was revealed. 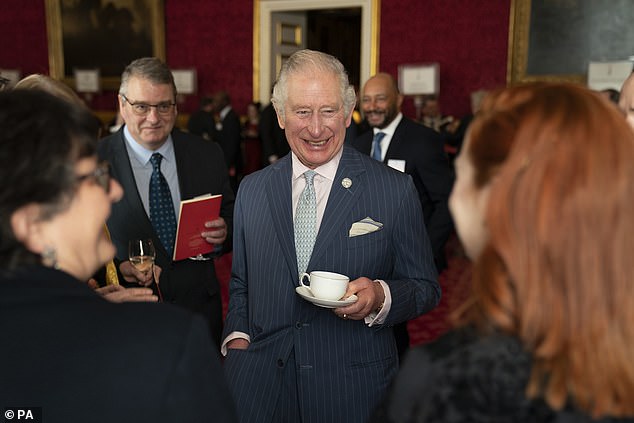 Mr Dimbleby said: ‘It seems to me bizarre that we should be giving it such attention. The idea that this is some sort of annus horribilis because it’s linked to his brother’s case – there’s no link at all.’

Listeners voice their incredulity at the interview, with several accusing Mr Dimbleby of sycophancy and of angling for his own knighthood.

Former Liberal Democrat minister Norman Baker said: ‘Whenever Charles is in a corner, Jonathan Dimbleby is wheeled out. Arise Sir Jonathan.’ He told the Mail that it was ‘insulting’ to compare Charles’s position to the Jimmy Savile slur against Sir Keir.

Charles, 73, appeared relaxed yesterday as he hosted a ceremony at St James’s Palace to present Queen’s Anniversary Prizes to universities and colleges.

Clarence House has repeatedly said he had ‘no knowledge’ of the cash-for-honours allegations. Mr Fawcett resigned from his £95,000-a-year role as chief executive of The Prince’s Foundation over the furore. Mr Mahfouz, who is thought to have donated at least £1.5million to royal charities, denies wrongdoing.

By EMINE SINMAZ for THE DAILY MAIL

Prince Andrew’s £12million sexual abuse lawsuit will be raised in Parliament next week amid growing questions over the Queen’s contribution.

Her Majesty is reported to have helped settle the duke’s civil case by personally making a £2million donation to his accuser Virginia Roberts’s charity in support of victims’ rights.

Miss Roberts, who brought the lawsuit under her married name Giuffre, has alleged she was forced to have sex with the duke three times when she was 17 under the orders of paedophile Jeffrey Epstein.

Buckingham Palace has refused to discuss the settlement despite reports claiming that the Queen bailed out Andrew using income from her private Duchy of Lancaster estate. Other reports have suggested that Andrew, 61, secured a sizeable bridging loan from the Queen and Prince Charles to help fund the payout.

Politicians and campaigners have insisted on ‘full transparency’ over whether public money will be involved. 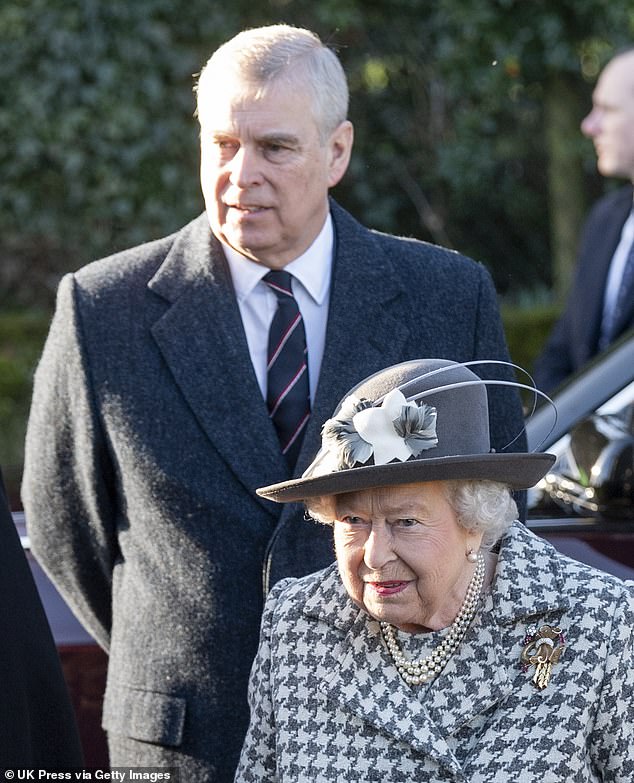 Prince Andrew’s £12million sexual abuse lawsuit will be raised in Parliament next week amid growing questions over the Queen’s contribution. Her Majesty is reported to have helped settle the duke’s civil case by personally making a £2million donation to his accuser Virginia Roberts’s charity in support of victims’ rights

Labour MP Andy McDonald said he would raise the issue when MPs return to Westminster next week after their half-term break. He said the palace’s ‘silence’ was a ‘ridiculous position’ because the issue over how the settlement is to be funded is not going to go away.

Mr McDonald told the Daily Mail: ‘We need that clarity as to whether the public purse is going to suffer any deficit as a result of this settlement. Because if Prince Andrew has to run off to his mother to bail him out then we need to know that that’s not going to be coming from the public purse.

‘It’s a perfectly reasonable request for clarification. I would have thought that the Government and Buckingham Palace would have been quite capable of giving us that assurance that we deserve and need. It’s a huge amount of money, and it’s a payout to settle a case that’s making the most heinous allegations.’

The Duke of York agreed to an out-of-court settlement with Miss Roberts, 38, on Tuesday – weeks after he had vowed to contest her rape claims at a public trial. Prince Andrew has agreed to settle a lawsuit filed by Virginia Giuffre, who said she was sexually trafficked to the British royal by the financier Jeffrey Epstein when she was 17

In the settlement, there was no admission of liability by Andrew, who has always denied the specific allegations.

Mr McDonald said that the duke did not acknowledge that his association with Epstein was something to regret in his car- crash Newsnight interview with Emily Maitlis in 2019 and changed his position when a settlement was reached.

‘It seems this court case has concentrated his mind. After having pulled all manner of stunts to frustrate the process, he’s now bought the case off,’ he said. ‘Now whose money is he going to use, that’s the question?’

Buckingham Palace said it would not comment on the payout.

Will police question Harry over tycoon?

Prince Harry could be questioned by detectives as a witness in the cash-for-honours investigation, it emerged yesterday.

He claimed last year he had raised concerns about the Saudi billionaire at the centre of the Scotland Yard probe into donations to his father’s charity.

Harry said he had ‘severed ties’ with Mahfouz Marei Mubarak bin Mahfouz in 2015 because of ‘growing concerns over his motives’. The following year Charles presented the tycoon with an honorary CBE.

Harry did not say who he shared his concerns with or what they were, but his intervention raises questions over whether Prince Charles or his advisers were aware of his thinking. 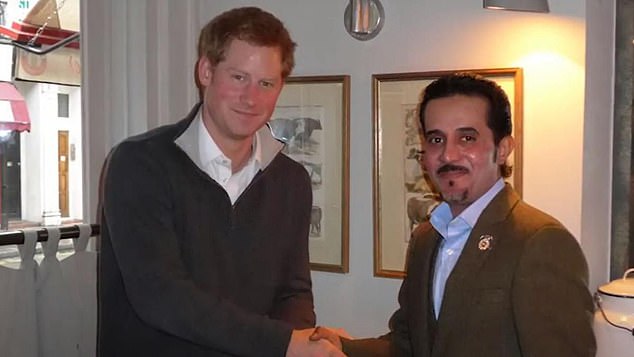 Former Scotland Yard detective Steve Morris told the Daily Mirror that father and son should be questioned about their dealings with Mr Mahfouz.

He said: ‘They should both be spoken to at the very least as witnesses. It would involve officers going to their address, or them being invited to a police station to give what’s called a Section 9 statement, purely as a witness at this moment in time.’

Harry has said he met Mr Mahfouz only once – in 2013, when the prince’s charity Sentebale received more than £50,000 in donations from the tycoon.

Walking With The Wounded, another charity of which Harry was patron, was given £10,000.