Jools Holland is in a self-deprecating mood

It’s the coolest party in town with the hottest music and guests, so Event just had to gatecrash rehearsals for tonight’s annual Hootenanny – where we corner Ed Sheeran and ask him if he would consider singing at Harry and Meghan’s wedding…

Midnight is approaching, strong drink may have been taken and Hootenanny host Jools Holland feels it is time to share a few home truths.

‘Nobody likes a nice bloke in music,’ he declares. ‘They want a pantomime villain or somebody who is a bit odd. Ed’s a nice fellow but I think, in a way, that makes it harder for him.’

Jools Holland turns 60 in January but doesn’t seem overly concerned about the looming significant birthday. ‘The important thing is I’m not dead yet,’ he stresses

Ed Sheeran, the world-beating British troubadour and all-round nice bloke, is standing beneath a large mirror ball, in rehearsals for the 23rd annual Hootenanny at the star-spangled Maidstone Studio in Kent. He has just run through his hit Perfect, with warm brass and sensual backing vocals supplied by the estimable house band, and is satisfied with the outcome. ‘Awesome,’ he nods.

‘I remember when he first came on the show,’ Holland recalls. ‘He had such a strength of conviction in the delivery of a song that it cut straight through. It wasn’t phoney or fake. It was like Ray Charles said years ago, “You can like my music, or not like my music, you can like me, or not like me. As long as you know what I am doing is telling the truth.” I see a lot of that in Ed.’

Sheeran has reached a stratospheric level of stardom this year. Media demands have become frenzied, and everyone is his long-lost friend, but he’s taking it all in his skinny-jeaned stride.

Even topping the charts with Beyoncé hasn’t fazed him. The remixed Perfect Duet is an international smash and has given Queen Bey her first US No 1 in nine years. This has delighted Jools Holland as the Hootenanny effectively introduced Sheeran to Beyoncé.

Beyoncé had seen Sheeran sing Stevie Wonder’s Master Blaster on the 2014 show and was so impressed that she approached him at a US awards show with a view to working together. ‘I can’t believe Beyoncé has seen me on YouTube,’ cries the Hootenanny ringmaster. ‘She said to Ed, “I saw you on Jools.” My head became so big I could hardly get out the door.’

Sheeran appears more laid-back about the whole affair and in casual conversation the assembled Hootenanny performers wonder whether Sheeran will be called on to play the romantic song at the royal wedding at St George’s Chapel, Windsor Castle, in May. 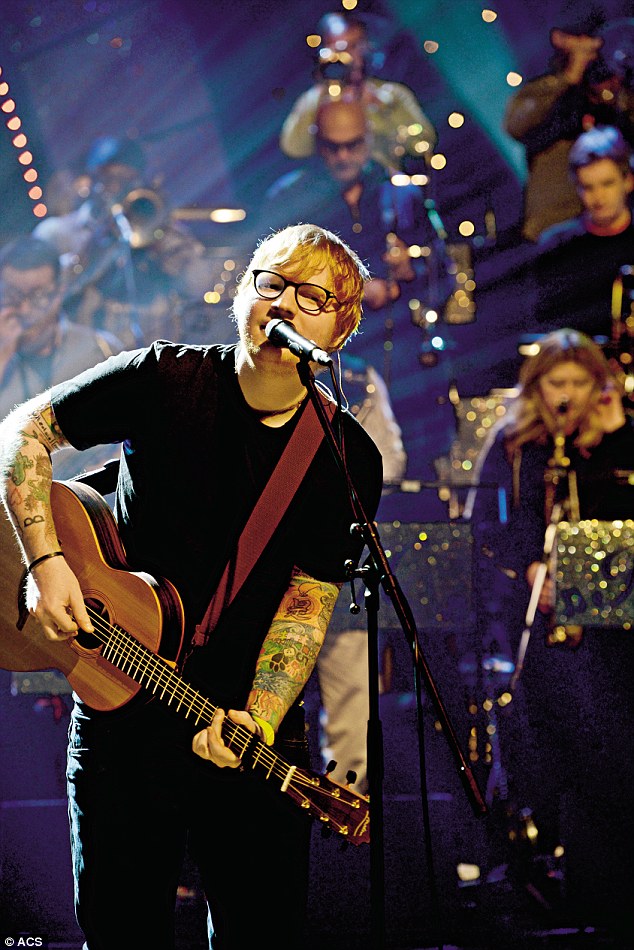 Sheeran seems up for it, if asked (‘Yeah, why not?’) but is reluctant to elaborate on arrangements.

The opinion of his peers today is that the marriage of Harry, Meghan and Ed would, indeed, be perfect. Awesome, even.

‘It’d be lovely and marvellous,’ squawks Holland excitedly. ‘Ed would definitely be more appropriate than someone like myself.’

Sheeran is obviously in his element here. He is relaxed with the crew, speaks politely to the band, earnestly discusses arrangements with Holland and frets endlessly about the correct guitar-string gauge to use for his incendiary version of Layla, a highlight of this year’s Hootenanny.

Plucking out the iconic seven-note intro to his hero Eric Clapton’s classic, Sheeran strides to the centre of the studio with a rock god’s confidence. ‘I guarantee every artist on this show peacocks for all the other artists that they’re playing for,’ Sheeran confides. ‘I remember doing Hootenanny and I was next to Paolo Nutini, who I really respect – I really think he’s a fantastic musician – and I want to show him what I do. So when you play you give it a little bit more. I know other artists won’t say that but it definitely is the case.’

Later… celebrated its 25th anniversary in September with a show at the Royal Albert Hall that featured Van Morrison, Paul Weller and Gregory Porter. Hootenanny, which began in 1993, is now as much a fixture of the post-Christmas season as turkey sandwiches and a cheeky afternoon prosecco. ‘Seeing midnight in with Jools’ is an acceptable alternative for the more domestic party animal.

Over a healthy salad in the studio canteen, Holland is figuring out what he has learnt over the past year. ‘I’ve learnt that Ed Sheeran is much cleverer than me,’ he decides. ‘Because when he goes on stage there is only one of him. When I go on stage I’ve got 22 people.’ 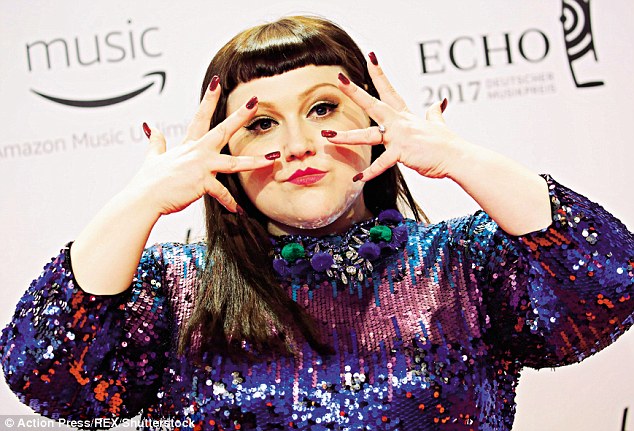 Beth Ditto, another guest on the show this year. Hootenanny, which began in 1993, is now as much a fixture of the post-Christmas season

Holland is hugely self-deprecating, happily describing himself as ‘a dreadful bore, a big head and a very old git’. Any criticism you’d care to level at him, or his show, he has heard before. ‘People tend to say to me, “Get out of the way, you old windbag,” ’ he chuckles. ‘I can understand that. I can’t believe I’ve managed to stay on for this long making music.’

Holland’s longevity owes a debt to his showbusiness connections. ‘Just the other night’, for instance, he hooked up with Woody Allen. ‘I went to see him play in the Royal Albert Hall,’ Holland elaborates. ‘Then we had dinner and he was very nice. The reason we got on is because he liked a lot of the early jazz.’

Holland turns 60 in January but doesn’t seem overly concerned about the looming significant birthday. ‘The important thing is I’m not dead yet,’ he stresses. ‘They tried to sell me life insurance the other day. I said, “No. I died years ago and claimed it. Thanks.” ’

Over in the Green Room, 78-year-old soul vocalist Mavis Staples – the youngest of the gospel group The Staple Singers – is reflecting on her own year. She recently completed a six-week tour with Bob Dylan, the very man whom the Hootenanny’s producers have yet to get in front of the cameras.

Staples never had a problem getting hold of Dylan. He proposed to her when they ‘courted awhile’ in the early Sixties. She turned him down, yet they still sound like an old married couple.

‘Bobby’s singing all these standards right now,’ Mavis grumbles good-naturedly. ‘I said to him, “Bobby, people want to hear Blowin’ In The Wind.” He said, “You sure about that, Mavis? I’ve got to sing other songs.” Sure enough, a couple of weeks later, he got around to playing Blowin’ In The Wind but he’d completely rearranged it. That’s Bobby.’

Jessie Ware prepares to tackle Ella Fitzgerald’s Do Nothing Til You Hear From Me. ‘F*** me,’ she grimaces at Holland. ‘I hope I don’t f*** it up.’ This earns her the sobriquet ‘Jessie Swear’ for the rest of the rehearsal.

Holland suggests that he and José Feliciano spark up Light My Fire, the Puerto Rican’s 1968 cover of The Doors’ signature tune.

‘That particular song I can do with my eyes closed,’ replies Feliciano, 72, who has been blind since birth. It transpires that the fleet-fingered guitarist has an especially sick sense of humour. ‘He’s like a Latin Bernard Manning,’ tuts Holland indulgently.

Jools’ Five Jewels To Get Your New Year Joint Jumpin’

‘That will get everybody up. I’ve never seen that not work.’

‘Never fails to gets people going.’

‘I can guarantee that will have folk dancing, in a very specific way.’

‘A great piano piece, which always has an usual, primal impact, particularly in a pub.’

‘You’d have that on New Year’s Eve. But I would say that.’

Holland and Feliciano released an album together last month, As You See Me Now, and a friendship has blossomed.

In her dressing room, Ruby Turner’s eyes brim with tears as she recalls taking her mother to Buckingham Palace to share in her MBE ceremony. ‘It hasn’t been the best period for mankind,’ the formidable singer says. ‘We need more kindness and compassion. That’s got to be the way forward.’

‘People need to be nicer,’ Holland agrees. ‘A code of decency is what I’d like to see.’

Holland returns to his grand piano and Ed Sheeran for one last bash at Layla. ‘Let’s make the best of the situation,’ sings Sheeran, cracking a smile. ‘Before I finally go insane.’

Have a happy Hootenanny and an awesome New Year.

‘Jools’s Annual Hootenanny’ will be on this evening at 11.20pm on BBC2