‘This is a reflection of Jurgen Klopp’s personality… never giving up, the fighting spirit’: Jose Mourinho full of praise for Liverpool boss after inspiring victory against the odds

Jose Mourinho paid homage to Jurgen Klopp after his Liverpool side’s triumph against the odds over Barcelona.

As Manchester United boss, Mourinho was one of the German’s fiercest rivals, but he showed a classy touch to lavish praise on his peer.

In the beIN SPORTS studio, the Portuguese said that he thought the 4-0 win at Anfield had all the hallmarks of Klopp as a coach.

‘I have to say, this remontada (comeback) has one name, Jurgen. I think this was not about tactics or philosophy but heart and soul and empathy that he created with this group of players.

‘They had a risk of finishing a fantastic season without anything to celebrate and now they are one step from being European champions. I think Jurgen deserves it.

He went on: ‘The work they are doing in Liverpool is fantastic. I think this is about him. This is a reflection of his personality, never giving up, the fighting spirit, every player giving everything.’ 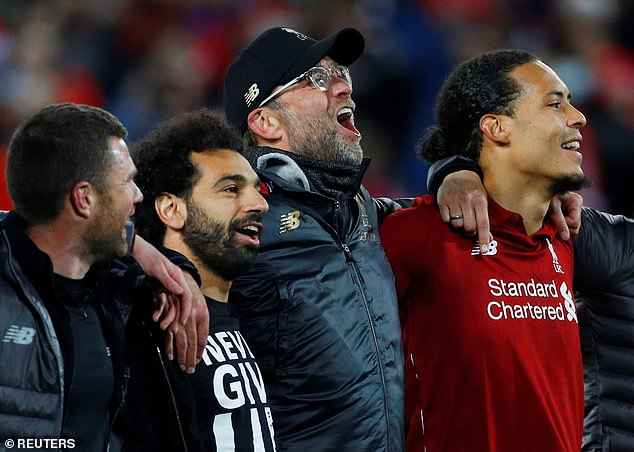 Klopp’s leadership was typified in his players fighting from first whistle to last, says Mourinho

Mourinho then further qualified his high praise by noting the fact that Klopp refused to draw attention to key injuries to the likes of Roberto Firmino and Mo Salah before the game.

‘He is not crying because he’s missing a player or playing 50-60 matches per season. Coaches in other leagues say their players play too many matches. Everything about today is because of Jurgen’s mentality.

‘I repeat, Jurgen is the man responsible for this achievement from his fantastic personality, his fantastic mentality. The team was there and the team believed,’ he said.