CHICAGO (AP) – Jose Quintana was terrific for the Chicago Cubs, and pretty typical when it comes to his outings against the Milwaukee Brewers.

“He had a good look from the beginning,” manager Joe Maddon said. “He was ready to roll, and that’s what he’s capable of looking like.”

Quintana (3-1) allowed two hits, struck out seven and walked one. The left-hander has thrown 24 straight scoreless innings against the Brewers dating to July 28, including six innings of three-hit ball in a 3-0 win at Miller Park on April 8.

He improved to 4-1 with a microscopic 0.63 ERA in six career starts against Milwaukee. When it comes to his success against the Brewers, he provided a simple explanation.

“I just try to be focused on every single pitch,” he said.

Tommy La Stella drove in two runs with a pinch-hit single in the seventh, and Javier Baez had a run-scoring double. Pedro Strop, Brian Duensing and Steve Cishek combined for the last six outs in Chicago’s third straight victory.

With Kris Bryant back in the lineup, the Cubs improved to 6-1 against the Brewers this season, including four shutouts. Bryant went 0 for 3 with a walk in his first appearance since being hit in the helmet by a pitch last Sunday.

Junior Guerra (2-1) pitched six innings of one-run ball, but Milwaukee finished with just two hits. The Brewers have just two runs and 12 hits through the first three games of the four-game set.

“We’ll have a bat ceremony tonight, and just have to figure out a way to score some runs,” manager Craig Counsell said. “They’ve pitched well, the conditions here are low scoring, but we’ve got to have better at-bats.”

The Cubs jumped in front in the third, making the most of a bright sun and an 18-mph wind blowing in at Wrigley Field.

Albert Almora Jr. singled with two outs and scored when Baez’s high fly to shallow center went off the glove of shortstop Orlando Arcia for a double. Center fielder Lorenzo Cain was the closest to the ball but lost it in the sun and called for help.

Chicago added two more in the seventh against Oliver Drake. Ben Zobrist led off with a single and went to third on a double by Jason Heyward. La Stella, hitting for Quintana, followed with a bloop single just over Arcia’s head.

Zobrist scored easily. Heyward initially stopped at third, but then broke for the plate when Arcia held onto the ball in short left field.

“I think Arcia just got a little lazy with throwing the ball in,” Counsell said. “I think he was just frustrated that he couldn’t get to the ball.”

Milwaukee’s best chance of ending Quintana’s streak came in the fourth. Cain led off with a double and advanced to third on a wild pitch. But Christian Yelich struck out, Ryan Braun fouled out and Domingo Santana was retired on a sliding stop by Baez at shortstop.

Bryant said he felt “completely normal” stepping in the batter’s box after being hit in the helmet.

“It was nice to get back out there,” he said. “It was just another ballgame.”

The Brewers’ bullpen streak of 32 consecutive scoreless innings ended in the seventh. It was the third-longest streak in franchise history.

Brewers: LHP Wade Miley (groin) struck out 11 in a start for Double-A Biloxi on Friday. The team must decide by Sunday whether to call up Miley – who signed a minor league deal – or allow him to become a free agent. “Wade did his job,” general manager David Stearns said. “He got healthy and he’s pitching well.”

Cubs: Zobrist (back tightness) was activated from the 10-day disabled list before the game and went 1 for 3. 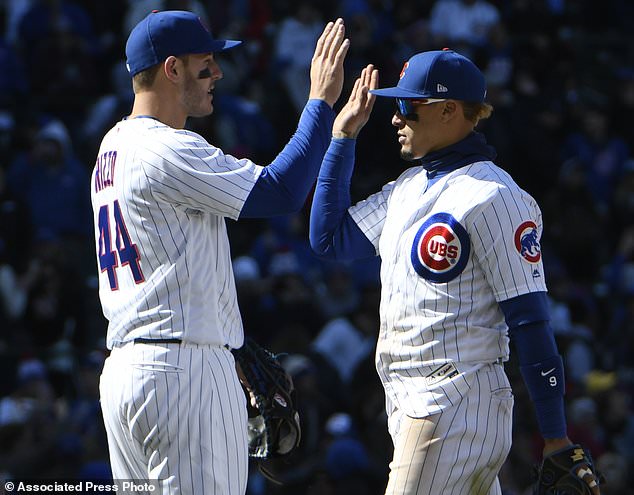 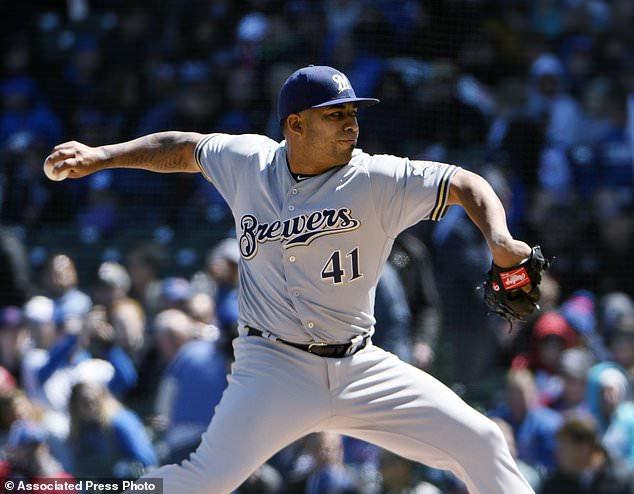