Jourdan Dunn and Chanel Iman lead the stars at PFW

They are no stranger to a style trend or two, both on and off the catwalk.

And it seemed Chanel Iman and Jourdan Dunn were giving designers future inspiration with their amazing ensembles as they attended Paris Fashion Week on Monday.

Chanel teamed her shiny outfit with an oversized grey checked coat, and stylish aviators to finish off her power-look.

The model finished off her look with a slick bun keeping her strong features on full display.

Jourdan went for a more street-style look, with her short denim mini-dress, white sock boots and cropped padded coat as she exited the Monceau hotel in the French capital.

The British star casually glanced out from over her narrow sunglasses as she seemed to point towards someone in one snap. 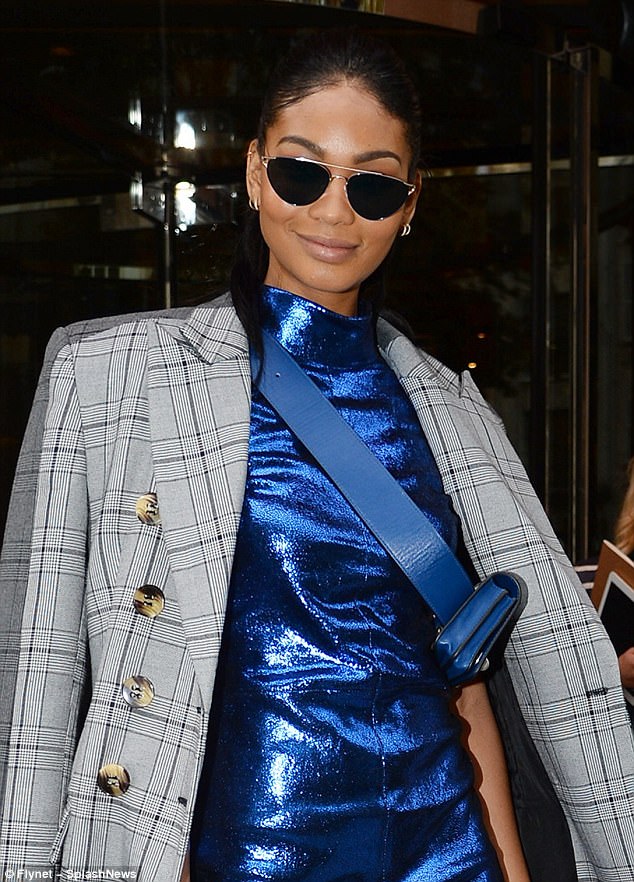 Metalli-queen! Chanel went for a dramatic blue metallic dress, which she covered with a grey checked overcoat draped loosely around her shoulders 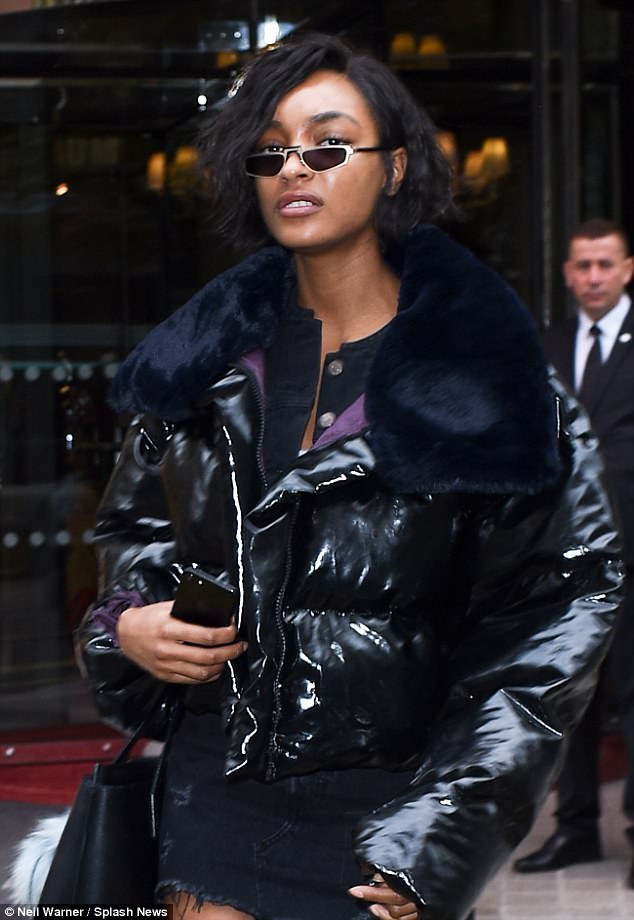 Flawless: Jourdan went for a classic street look, teaming her denim minidress with a padded patent jacket, and narrow sunglasses

Amazing: Chanel (L) smiled for the cameras in her dramatic look, while Jourdan (R) seemed more preoccupied as she exited the Royal Monceau hotel 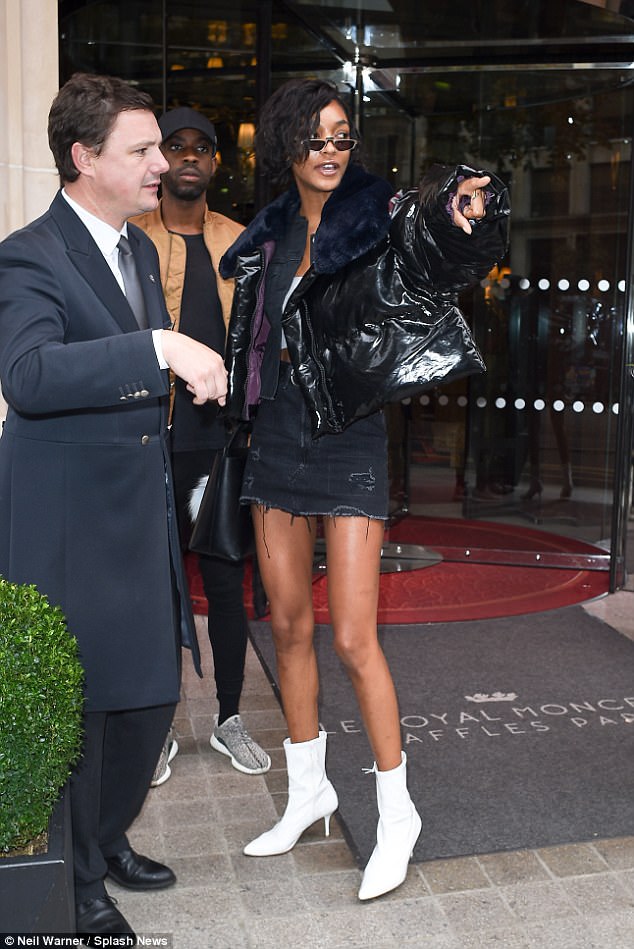 Who’s that? Jourdan seemed to point towards someone as she left her hotel to head the latest Paris Fashion Week event 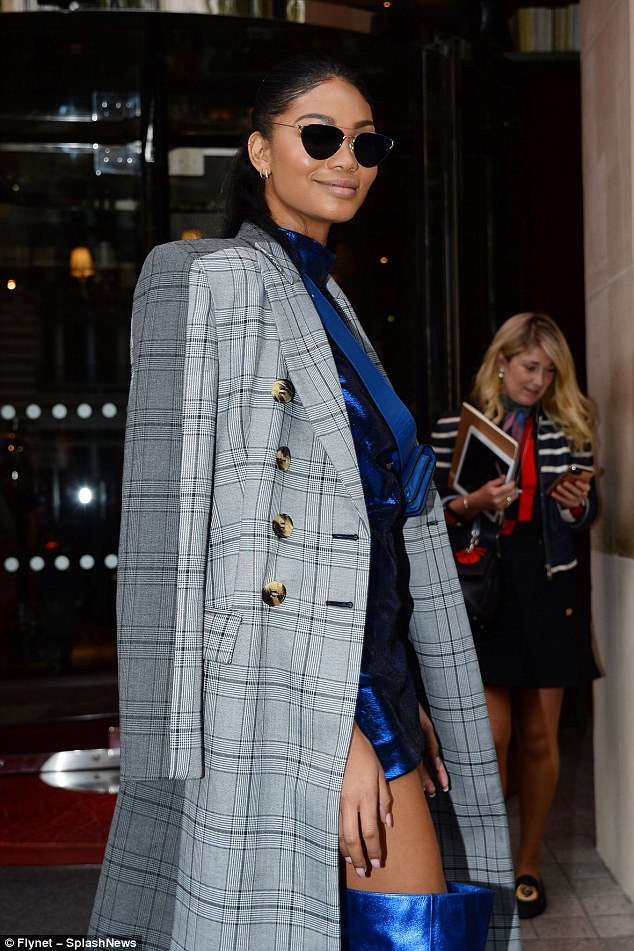 Check me out! Chanel seemed proud of her look as she headed into the French capital, with the thigh-high metallic boots accentuating her leggy frame

Jourdan and Chanel were joined at the Paris fashion showcase by Russian Model Natalia Vodianova, who took a break from raising her five children .

The 35-year-old was seen in a variety of outfits as she attended the Shiatzy Chen SS18 show and the opening of its Avenue Montaigne shop in a different, but equally dramatic look.

Natalia went red queen at the opening of the boutique store in a full-length scarlet lace frock, covering up just enough yet still showing off her willowy frame.

The Vogue cover girl gave her look an added edge with silver trainer-style shoes with a matching chainstrap bag.

Vintage: Russian model Natalia Vodianova, 35, chose something more covered up as she attended the opening of first Shiatzy Chen shop on Avenue Montaigne 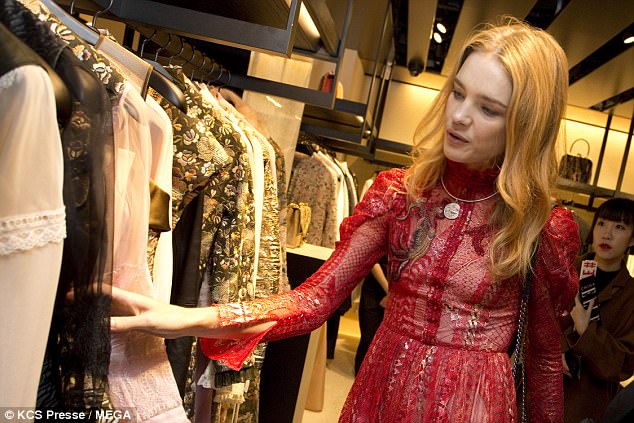 Browse: Natalia has a quick perusal of the rails at the shops opening, in a dramatic scarlet floor-length lace dress 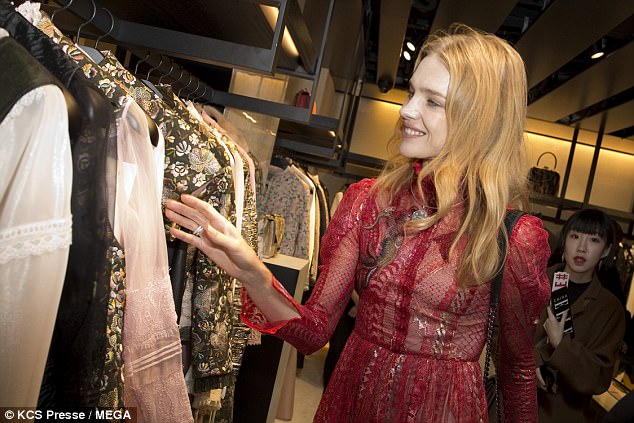 Channelling Bronte: Her full-length dress had a hint of Victoria in it’s covered up nature, although the mother-of-five still stunned

For her front row spot at the Shiatzy Chen show, the model went full vixen in an all black look, attending the event with partner of six years Antoine Arnault.

Rocking a lace cape-style top which showed off her washboard abs with leather tapered trousers and strappy black stilettos, Natalia went all-out at the womenswear launch, with a powerful red lip accentuating her alabaster complexion.

Natalia, who lives in central Paris with her five children, looked amazing in the gothic look as she posed for posed for snaps. 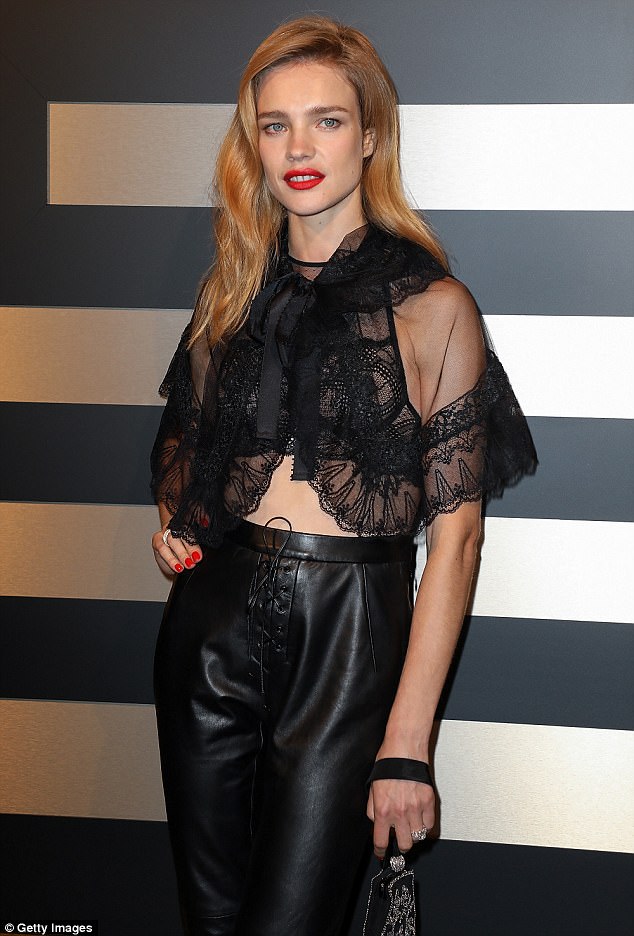 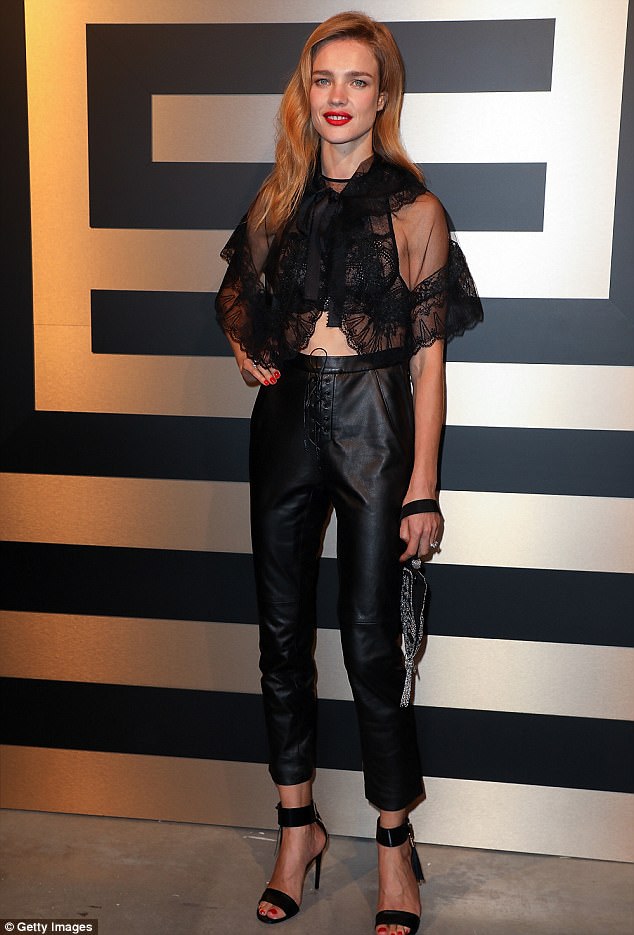 Lace-tastic: Natalia showed off her washboard abs in the cape-style top and leather tapered trousers 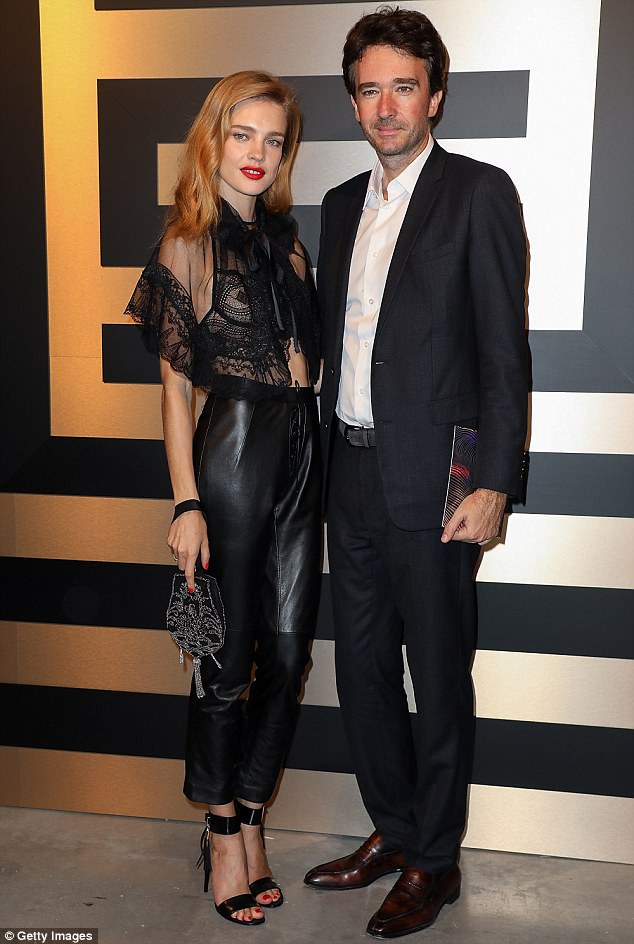 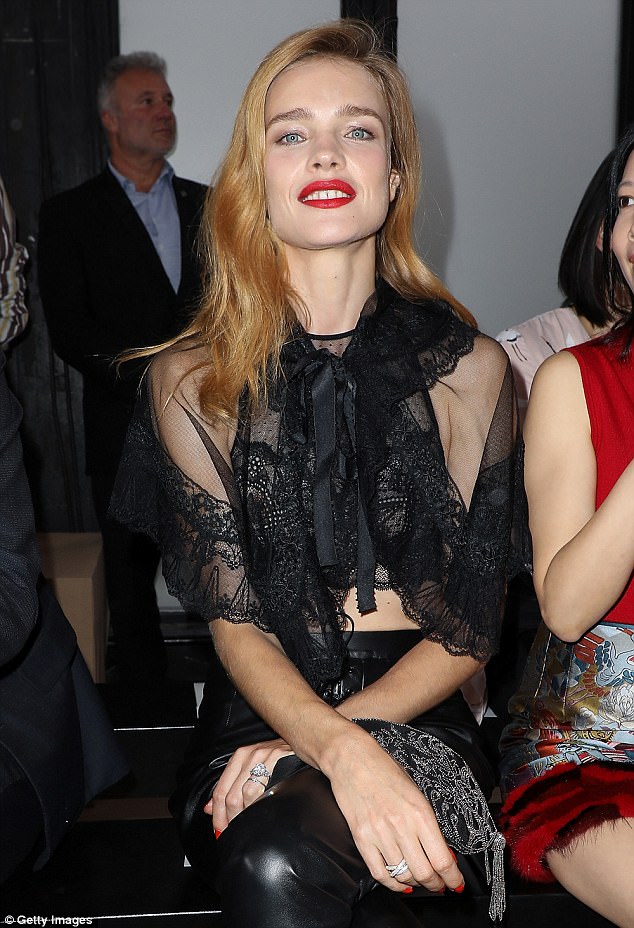 Rock chic: Natalia teamed her look with a red power pout as she sat front row at the show

Also spotted in Paris was actress Salma Hayek, who went for a monochrome look as she attended Fashion Tech Lab Launch Event hosted By Miroslova Duma And Stella McCartney.

Salma, who was joined by her husband of six years Francois-Henri Pinault, went for a more structured look with a white pussybow blouse, black jumper and black skirt combo.

The Hot to be a Latin Lover star looked far younger than her 51 years as she headed to the event hand-in-hand with her spouse. 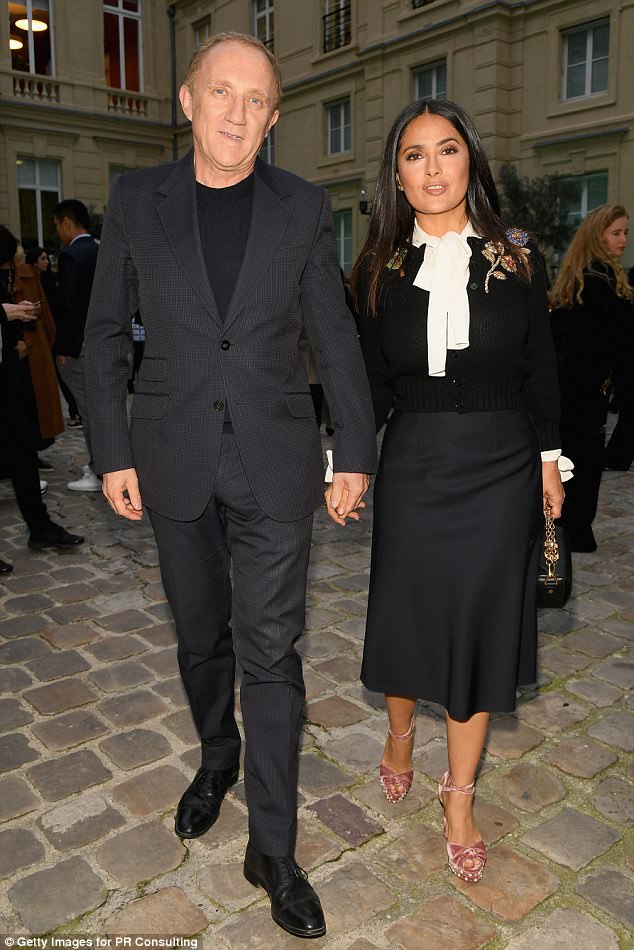 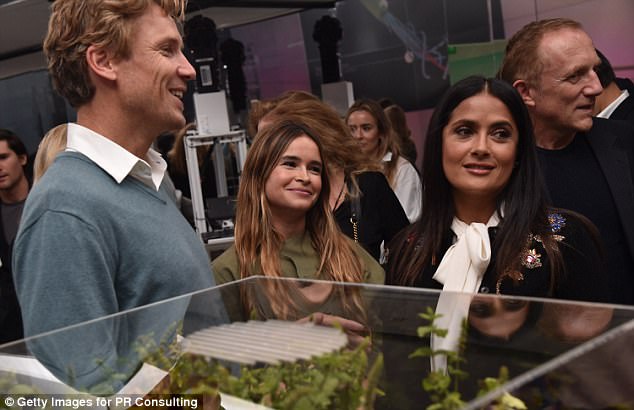 Fashion forward: The event was hosted by Miroslova Duma And Stella McCartney 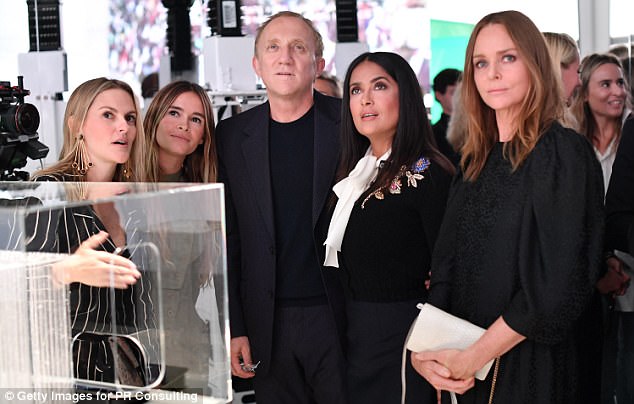 Observer: Salma went for a more structured style in black and white

Hollywood royalty Will and Jaden Smith were also spotted out and about in the city, with son 19-year-old Jaden getting maximum wear out of his 90s-style trousers.

The actor was spotted in the same Fresh Prince-inspired look on Sunday on Paris’ Place de la Concorde.

Jaden teamed his look with the same oversized denim jacket and black hoodie, keeping a low profile as he wandered around the city.

Hollywood royalty: Father-son duo Will and Jaden Smith were also seen out and about in Paris 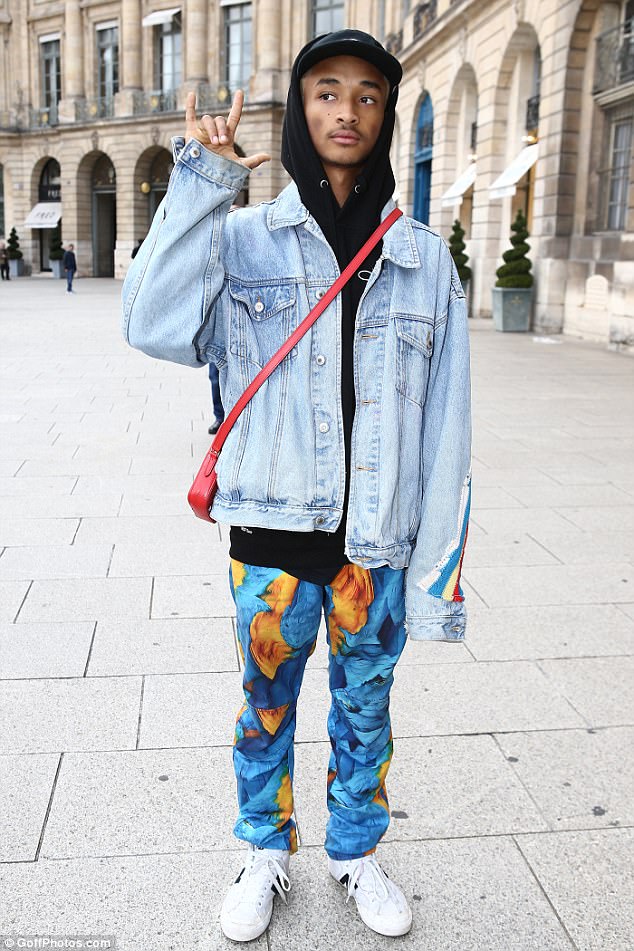 Re-work: Jaden, 19, got maximum use out of his electic Fresh Prince-style trousers

Despite his rework, Jaden did a quick change for the Louis Vuitton Party as he exited the event that evening.

The Karate Kid star chose a printed windcheater jacket adorned with the signature print of the designer, along with bright blue trousers.

Jaden also removed allowed his blonde buzz cut to be on full show after wearing a baseball cap earlier in the day. 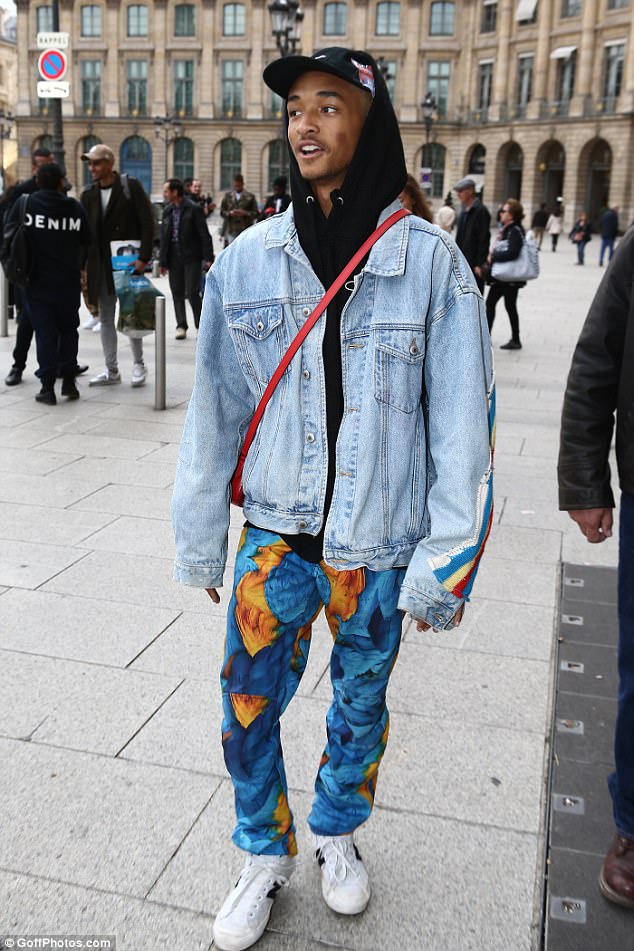 Encore: Jaden was spotted in the same look in Paris’ Place de la Concorde on Sunday

New look: Jaden did a quick change for the Louis Vuitton party later that day, wearing a windcheater-style jacket adorned with the designers logo 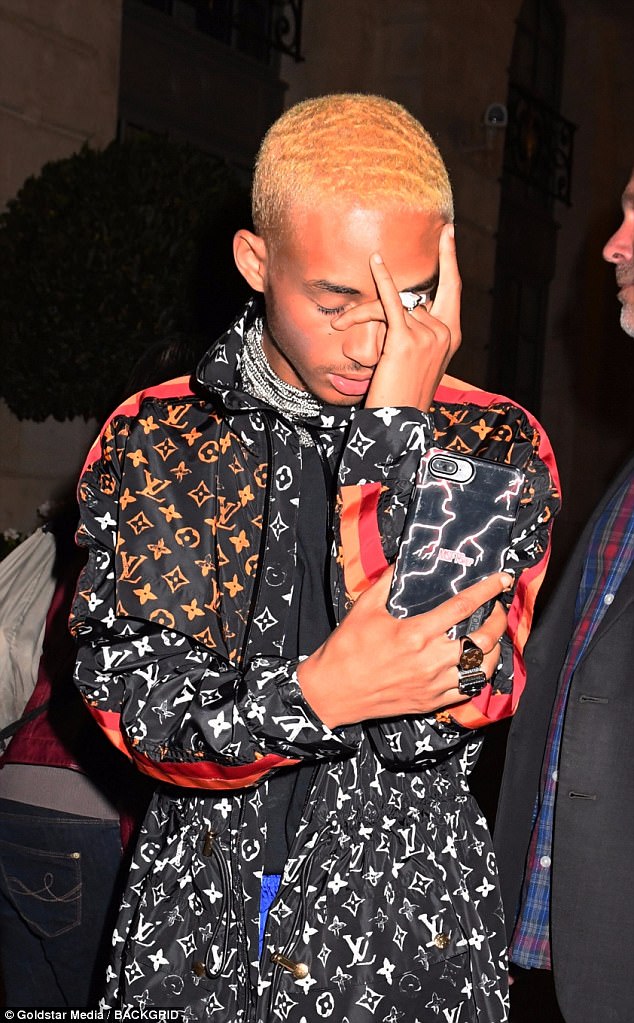 What did you forget? Jaden appeared dismayed by something as he arrived at the party with his blonde buzzcut on full display

Oh! Jaden also seemed surprised by something at the party, where he wore another dramatic look in tune with his dynamic style

Jaden’s father Will Smith seemed in good spirits earlier in the day as he wandered through the city with his DJ Jazzy Jeff, waving to fans and signing autographs.

The 49-year-old Suicide Squad star kept it casual in jeans and a white polo, with a simple grey hoodie and white cap to finish off the look.

Will’s next big picture will be the Netflix exclusive urban fantasy thriller Bright, set for release in December. 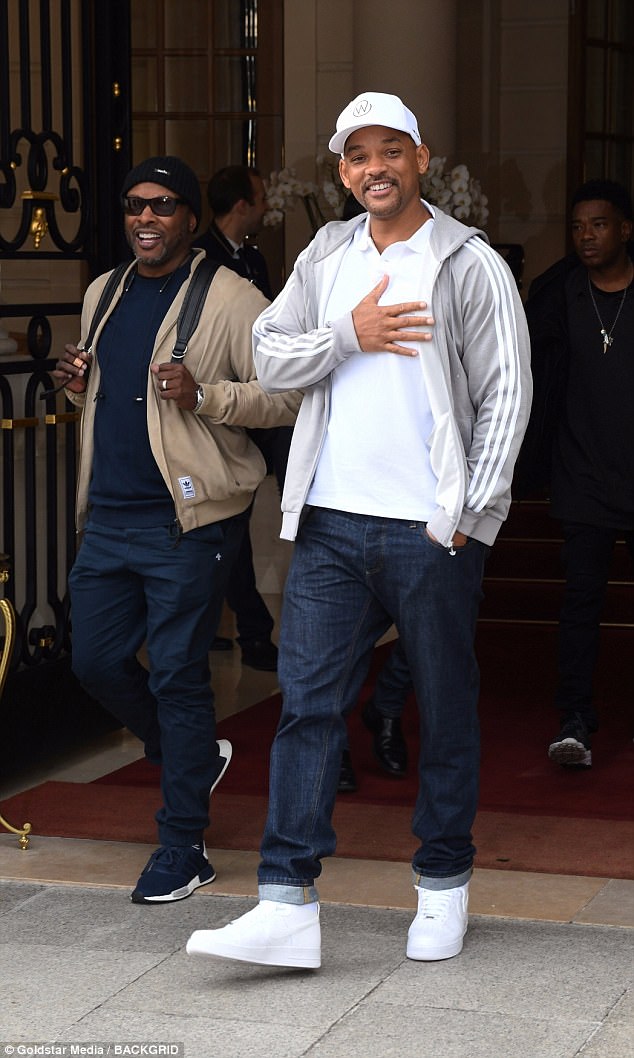 Real Fresh Prince: Jaden’s father Will Smith was in good spirits as he wandered the Paris streets with friend and collaborator Jazzy Jeff (L) 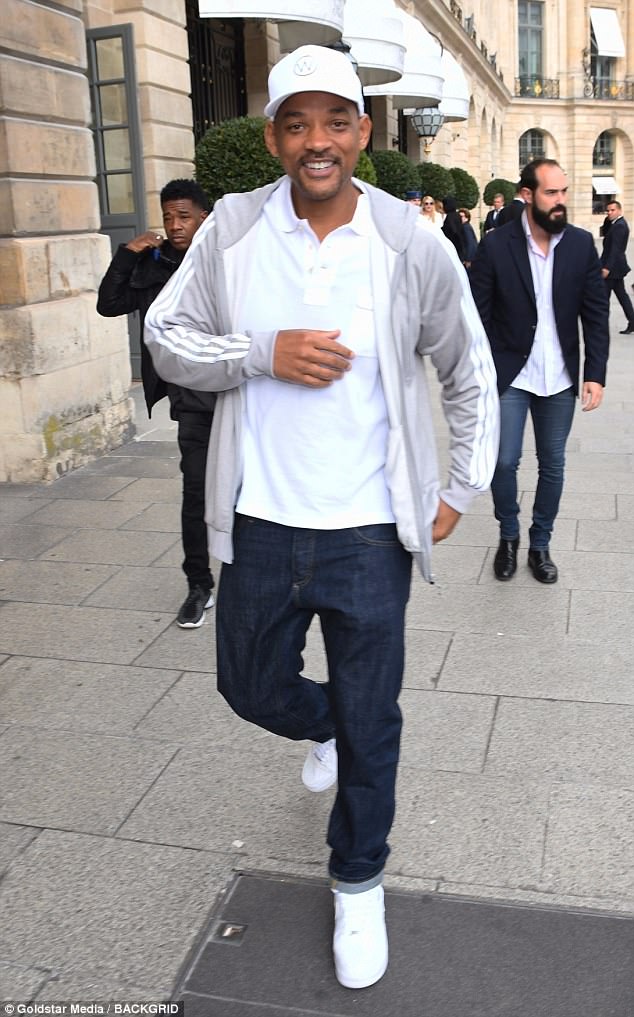 Superstar: Will’s next big picture is the fantasy crime thriller Bright, set for a Netflix release in December 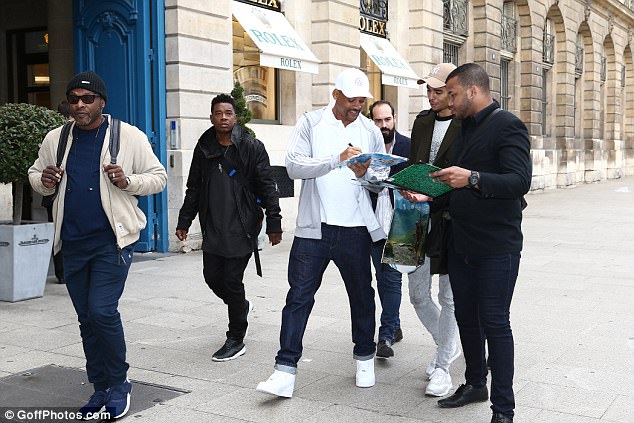 Legend: 49-year-old Will seemed happy to sign autographs as he headed through the French streets