Journalist, 29, is shot dead in ‘terrorist incident’ in Londonderry

A female journalist was shot dead in Londonderry last night in a suspected dissident Republican attack while covering a riot.

The 29-year-old woman is believed to have been hit by a stray bullet after a gunman opened fire at around 11pm.

Friends of the reporter confirmed her death to MailOnline however it was unclear this morning whether the woman’s next of kin had been informed.

One close friend said: ‘The loss her friends feel is unquantifiable. Unfathomable. She is utterly irreplaceable.’

Police said a 29-year-old woman died in what they termed a ‘terrorist incident’ and confirmed a murder probe was underway. Dissident republican terrorists were suspected of being behind the attack, the BBC reported. 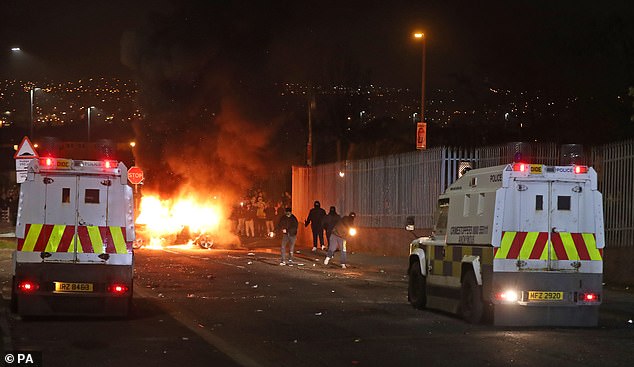 The journalist had headed to the city’s Creggan district after riots erupted following police raids on a number of homes yesterday.

Ten minutes before she was shot, she posted a photograph of the scene describing the riot as ‘madness’.

Several vehicles were hijacked and set alight earlier in the incident before the gunshots were heard.

Another reporter, Leona O’Neill, said she was standing next to the woman who was hit.

She Tweeted: ‘I was standing beside this young woman when she fell beside a police Land Rover tonight in Creggan.

‘I called an ambulance for her but police put her in the back of their vehicle and rushed her to hospital where she died. Just 29 years old. Sick to my stomach tonight.’

The unrest comes ahead of the Easter weekend where republicans mark the anniversary of the 1916 Easter Rising, a time when dissidents are traditionally active. 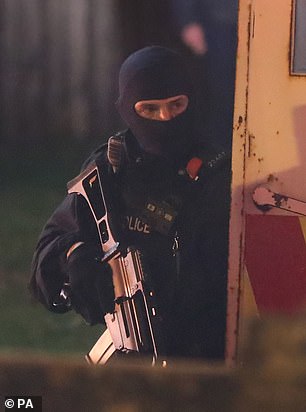 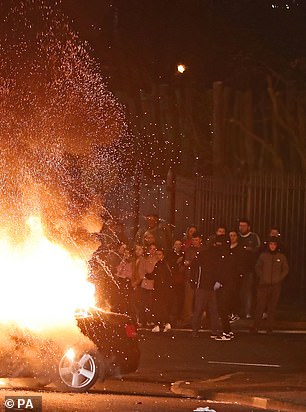 Politicians have widely condemned the killing.

She said: ‘I am shocked and saddened at the tragic news that a young woman has been shot dead by so-called dissidents in the Creggan estate tonight.

‘The murder of this young woman is a human tragedy for her family, but it is also an attack on all the people of this community, an attack on our peace process and an attack on the Good Friday Agreement.

‘I unreservedly condemn those responsible for killing this young woman.

‘We will remain resolute in our opposition to the pointless actions of these people who care nothing for the people of Derry.’ 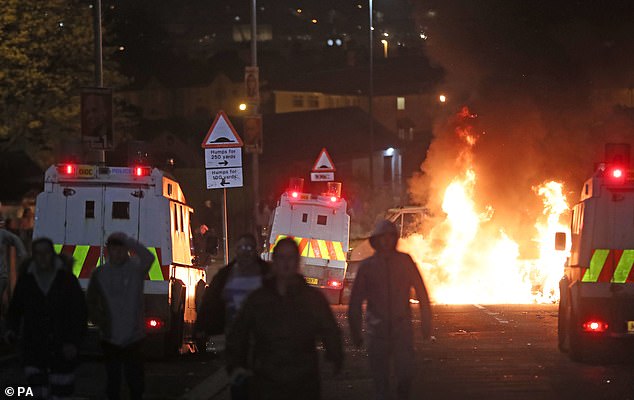 DUP leader Arlene Foster said that news of the death was ‘heartbreaking’ and that it was a ‘senseless act’.

Mark H Durkan, SDLP MLA for Foyle, said he was left ‘heartbroken and angry’ by the killing.

‘Just leaving Creggan, heartbroken and angry at the senseless loss of a young life,’ he tweeted.

‘Violence (only creates victims, that’s all it ever has done. The thoughts and prayers of our city are with the young woman’s family and friends, may she rest in peace.’

Assistant chief constable Mark Hamilton, from the Police Service of Northern Ireland, said a murder inquiry had been launched after the death.

He said: ‘Sadly I can confirm that following shots being fired tonight in Creggan, a 29-year-old woman has been killed.

‘We are treating this as a terrorist incident and we have launched a murder inquiry.’

PSNI officers were searching houses in the Creggan area when the disorder broke out.

Bricks, bottles and fireworks were hurled at police officers and a car and a van were seen burned out in the area.

The trouble comes after the announcement on Monday that ‘Soldier B’ will be prosecuted for the murder of 15-year-old Daniel Hegarty in the Creggan area in July 1972.

He will also be prosecuted on a second charge of wounding with intent.

The Police Service of Northern Ireland wrote on Twitter: ‘Police are appealing for calm after a number of shots have been fired and petrol bombs thrown in the Creggan area of Derry.

‘PSNI and members of the public being put in danger by unrepresentative thugs intent on destroying communities.’