A new book takes readers on a nostalgic journey back 70 years to post-war Britain as rare photos show busy commuters and tourists catching retro buses, trams and trolleybuses in the 1950s and 60s.

In one remarkable image, an RT 775 red double-decker bus can be seen travelling along Ludgate Circus towards Fleet Street in central London in 1949.

Another photo shows a Thames Valley Traction Company coach transporting tourists from Bristol to London’s Piccadilly Circus where a newspaper van is parked up selling copies of the now-defunct Evening News in the 1950s.

Some of the other 200 pictures compiled feature a 1945 Daimler CWA6 bus outside of Coventry Cathedral – now a pedestrianised area – in November 1940, and a series of FX3 flat-backed cabs parked up near the Glasgow & District Subway Railway headquarters in the mid-1950s.

Also featured are a PVD6 type Warrington Corporation No 111 bus on Buttermarket Street in 1969, a Rochdale Corporation AEC Regent V ivory and white bus parked on Fountain Street in Manchester in 1967, and a 1937 all-Leyland TD5 bus known as ‘The White Rose’ along Royal Parade in Eastbourne in 1961.

The fascinating images have been used in A Transport Journey in Colour: Street Scenes of the British Isles 1949 – 1969, a new book by authors Martin Jenkins and Kevin McCormack.

A PVD6 type Warrington Corporation No 111 bus in use on Buttermarket Street on March 27, 1969. School-age children are seen standing outside a Tesco store while queuing to take the bus, which is full of passengers. Services expanded rapidly after the Second World War as new housing estates grew in areas such as Orford and Great Sankey 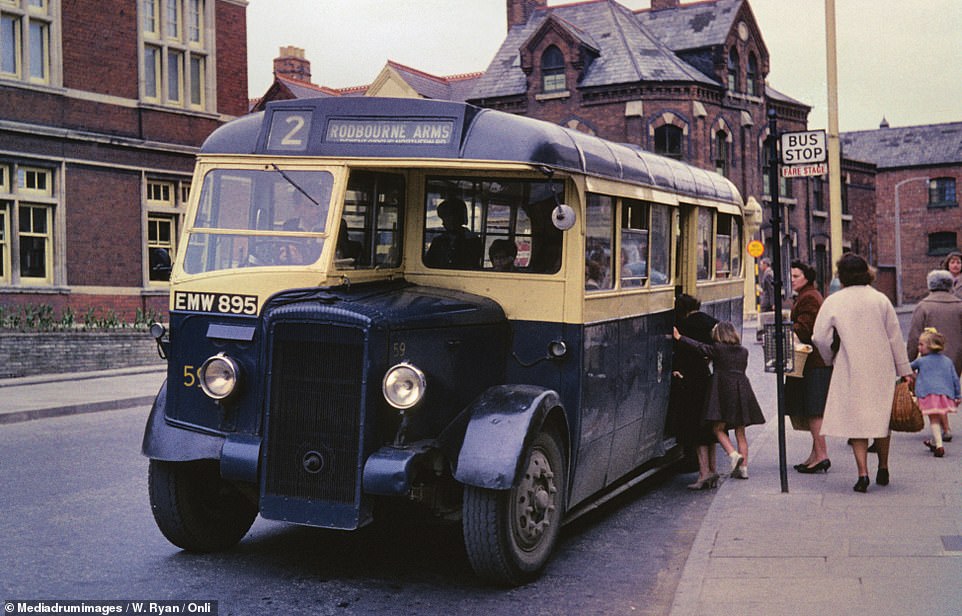 Passengers aboard the Park Royal-bodied Swindon Corporation Daimler CVD6SD in Swindon in 1966. A woman and a girl board the bus by the bus stop as the vehicle makes its way to the Rodbourne arms. Daimler has moved through various hands, from BSA and Jaguar Cars to Ford and Jaguar Land Rover – before ending with Tata at present 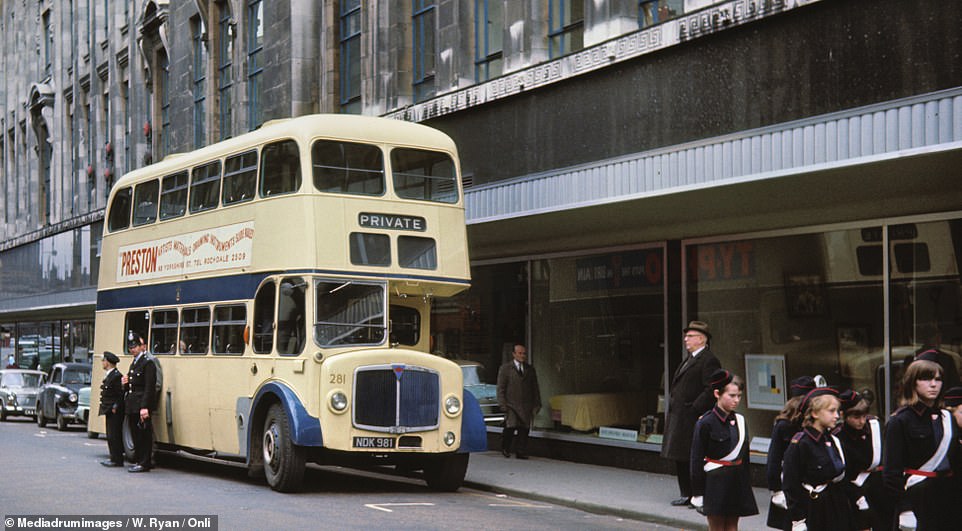 A Rochdale Corporation AEC Regent V ivory and white bus parked on Fountain Street in Manchester on April 30, 1967. In around 1961 Regent V 277(NDK 977) was painted in the style of livery as an experiment to allow spray painting to be used to save costs. It was said the livery needed to be simplified to allow this method of painting to be adopted 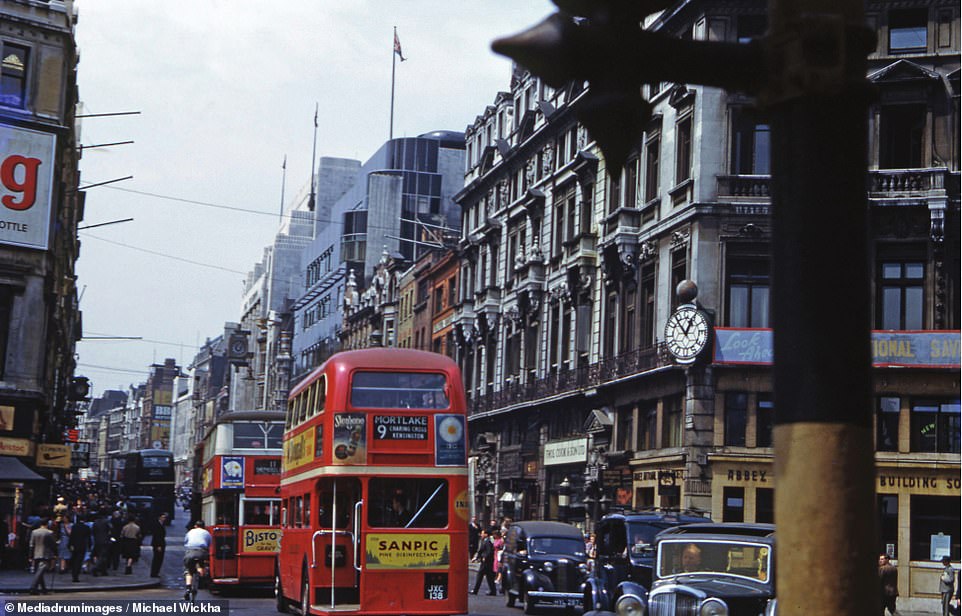 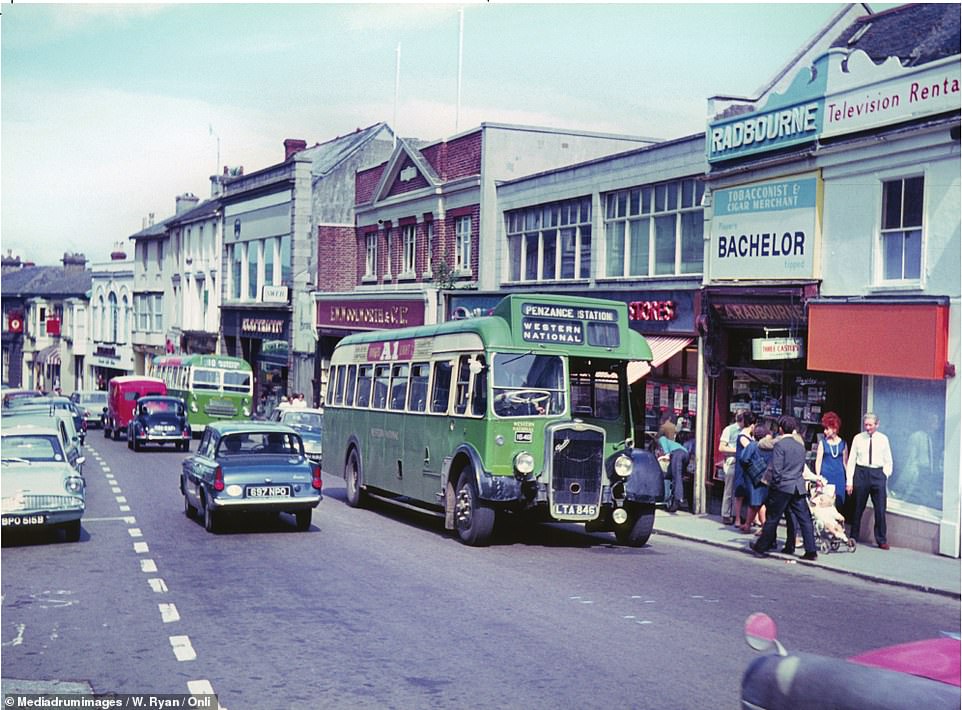 An Eastern Coachworks-bodied Bristol LWL6B bus pictured in Market Jew Street in Penzance on July 20, 1965. ECW was nationalised in 1947. For the next 18 years, its business consisted mainly of building bus bodies, which were mounted on Bristol chassis, for state-owned bus operators 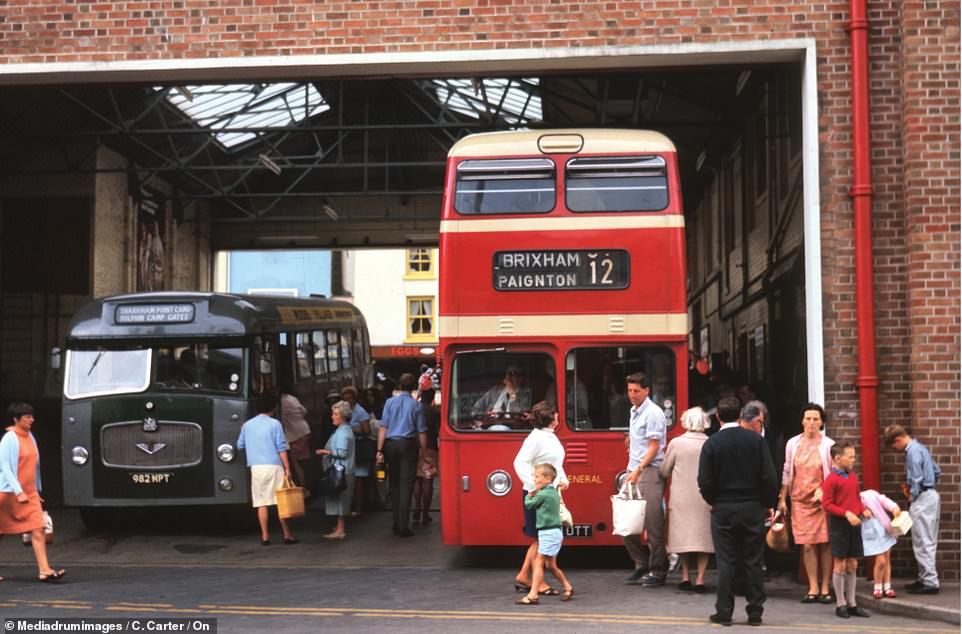 Busy activity at Devon General’s bus station in Brixham in the summer of 1968. Devon General was the principal bus operator in south Devon from 1919. In 1922 it was purchased by the National Electric Construction Company which merged with British Electric Traction in 1931. Nationalisation in 1969 resulted in 1971 with the company being merged into Western National 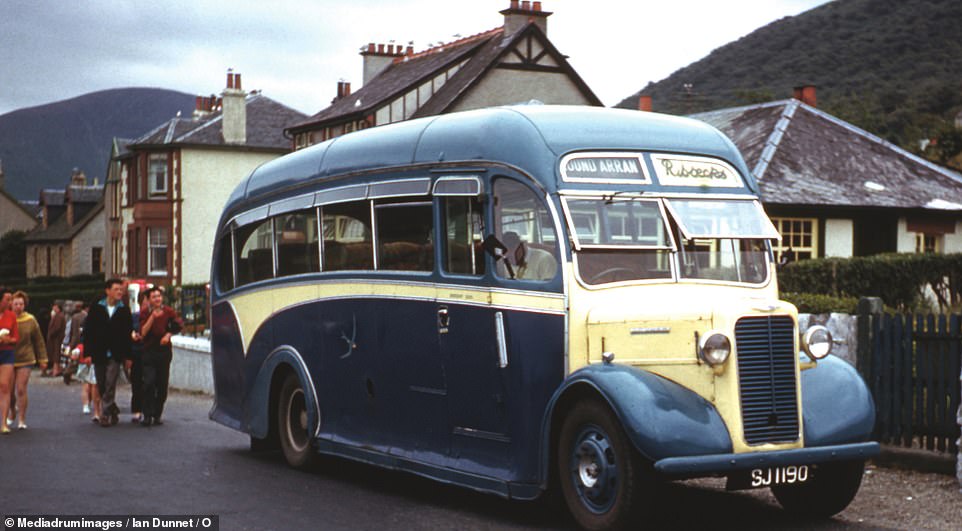 A Commer Commando bus – which dates back to 1948 – on the island of Arran. From 1959 it was used first as a staff bus, then as a commercial coach by two operators until, in June 1962, it was bought by The British Automobile Motor Club and converted for use as a race control vehicle 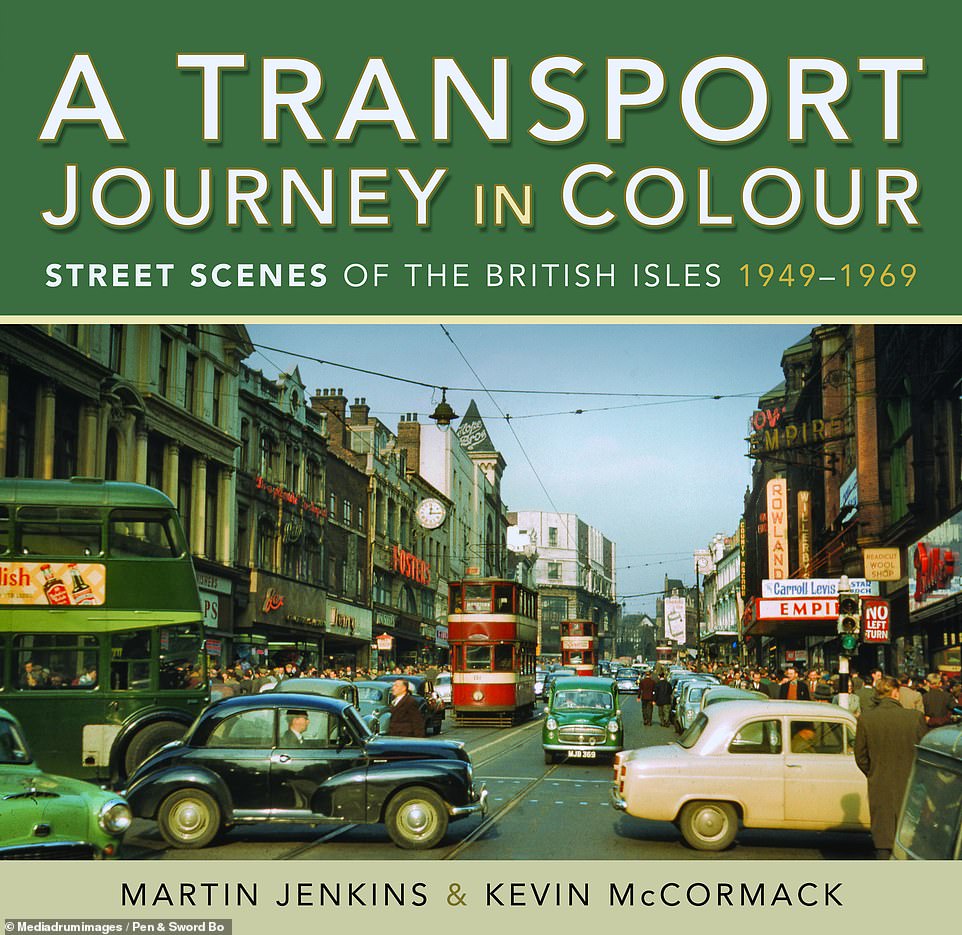 The front cover of A Transport Journey in Colour: Street Scenes of the British Isles 1949-1969 by Martin Jenkins and Kevin McCormack, out now

They managed to bring together the outstanding photos taken from a period when colour coverage of transport subjects was in its infancy.

As a result, the book contains many previously unpublished views taken between 1949 and 1969 held by Online Transport Archive.

Hours of researching using Google Street View enabled the authors to show how streets throughout the British Isles have changed or altered virtually beyond all recognition.

In its introduction, the book states: ‘It is noteworthy how streetscapes have changed: the volume of private vehicles; yellow lines restricting parking; box junctions; concreted front gardens and pedestrianised thoroughfares, to name just a few. 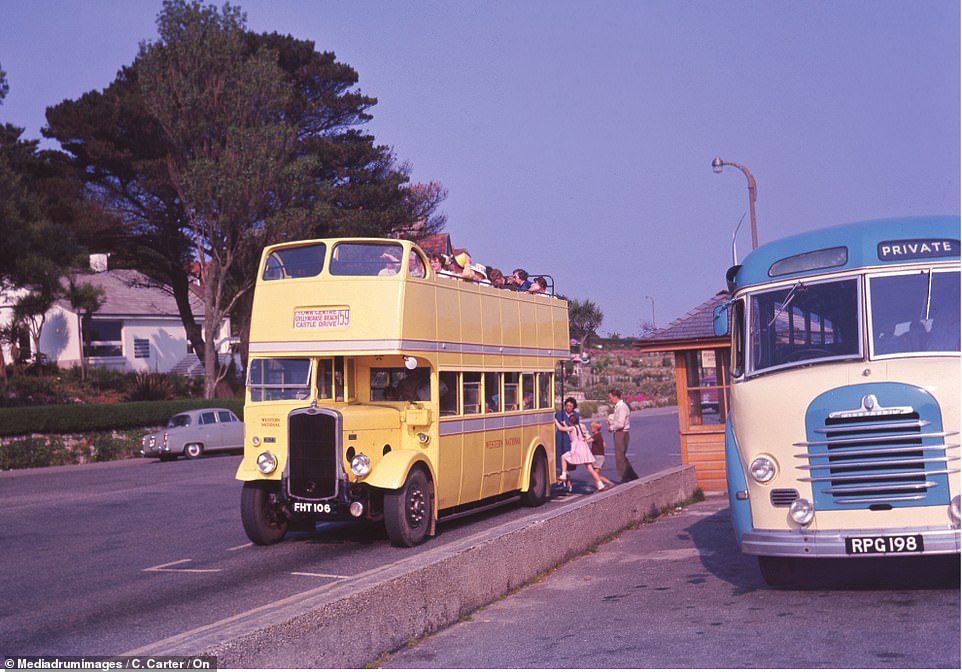 Holidaymakers pictured atop a Western National Bristol open-top K5 bus in Falmouth on June 26, 1964. Open top buses in Weston-super-Mare, Somerset, England, were introduced in 1950 and have run along the sea front every summer since. The initial operator was Bristol Tramways and this company’s successors continued to provide services until 2013 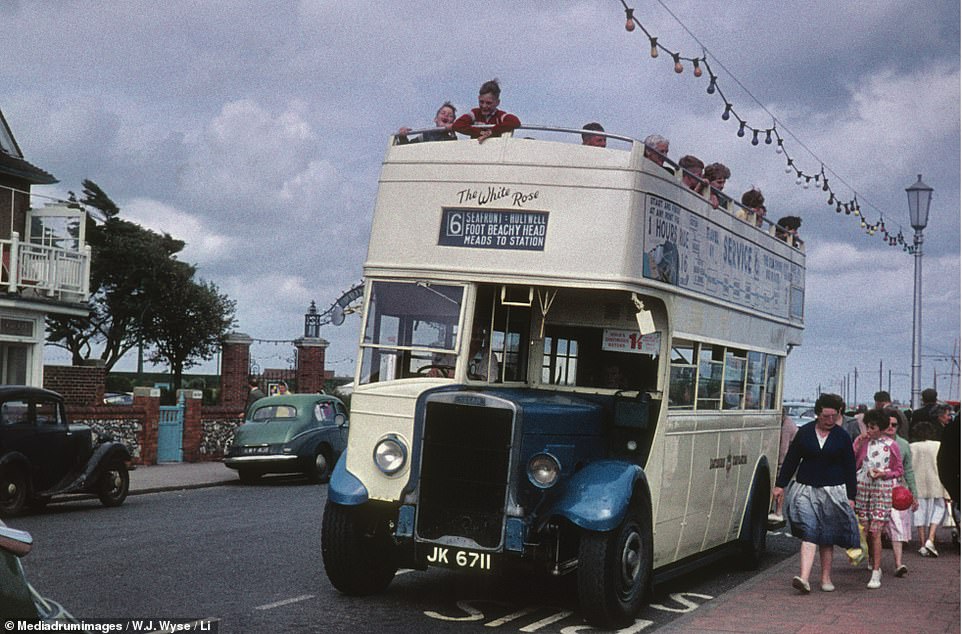 Passengers ride atop the 1937 all-Leyland TD5 bus known as ‘The White Rose’ along Royal Parade in Eastbourne in May 1961. The Leyland Titan was a forward-control chassis with a front-mounted engine designed to carry double-decker bus bodywork. It was built mainly for the UK market between 1927 and 1942, and between 1945 and 1969 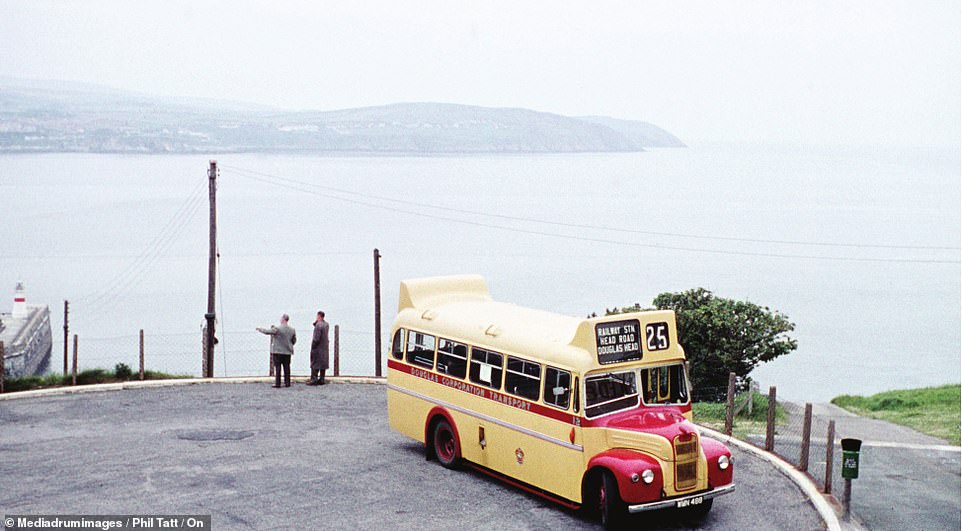 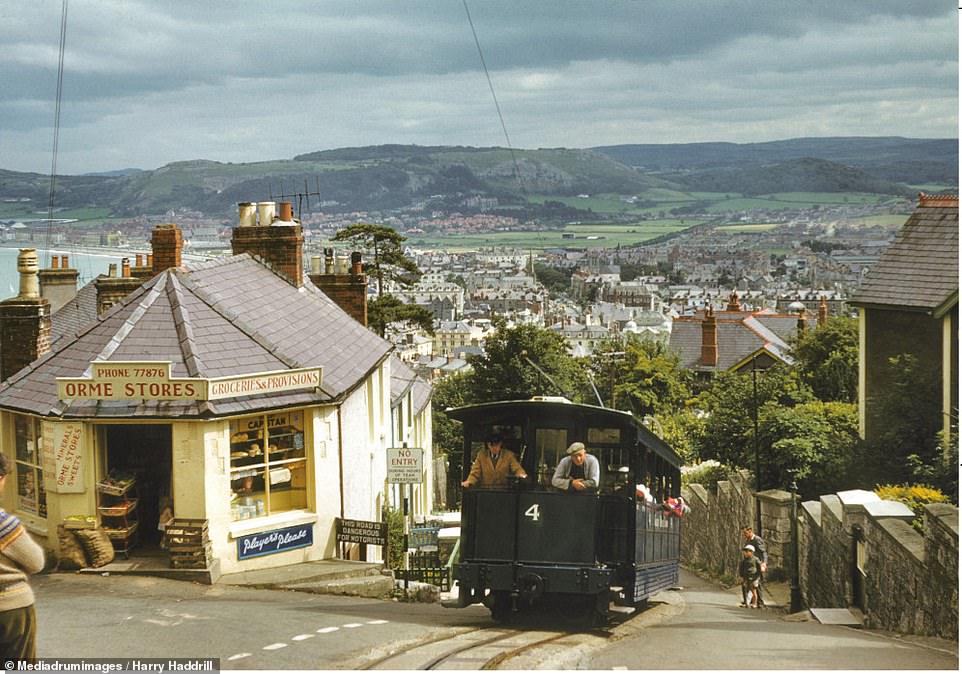 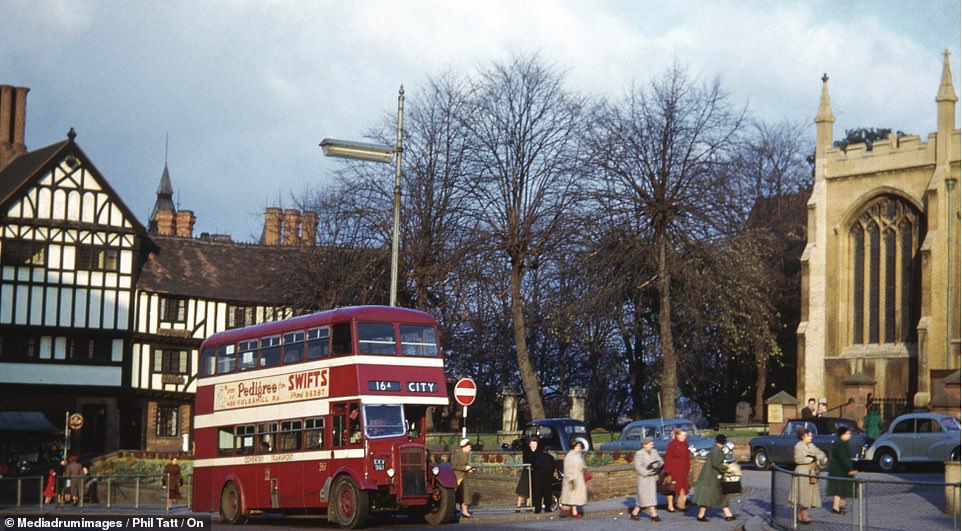 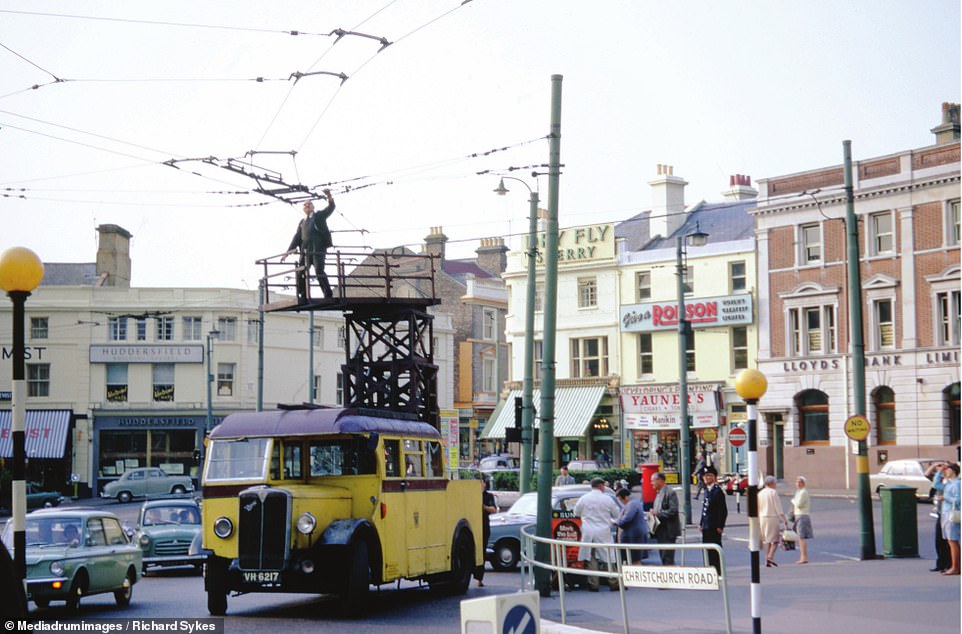 A Bournemouth Corporation trolleybus, complete with a tower wagon to repair overhead wires, pictured in Lansdowne Crescent, London, in the early 20th century. The Bournemouth trolleybus system once served the town of Bournemouth, then in Hampshire, but now in Dorset, England. Opened on May 13, 1933, it gradually replaced the Bournemouth tramway network 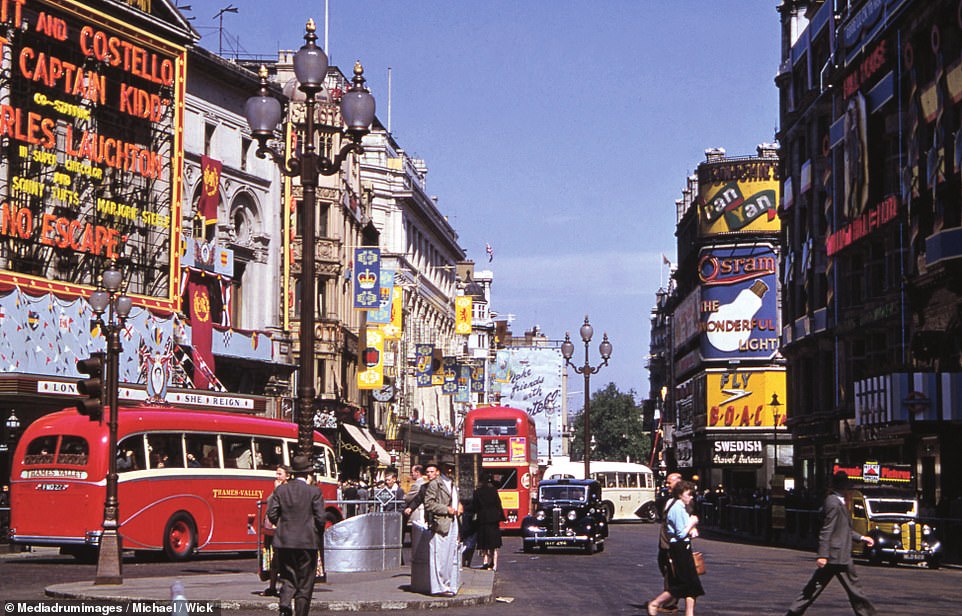 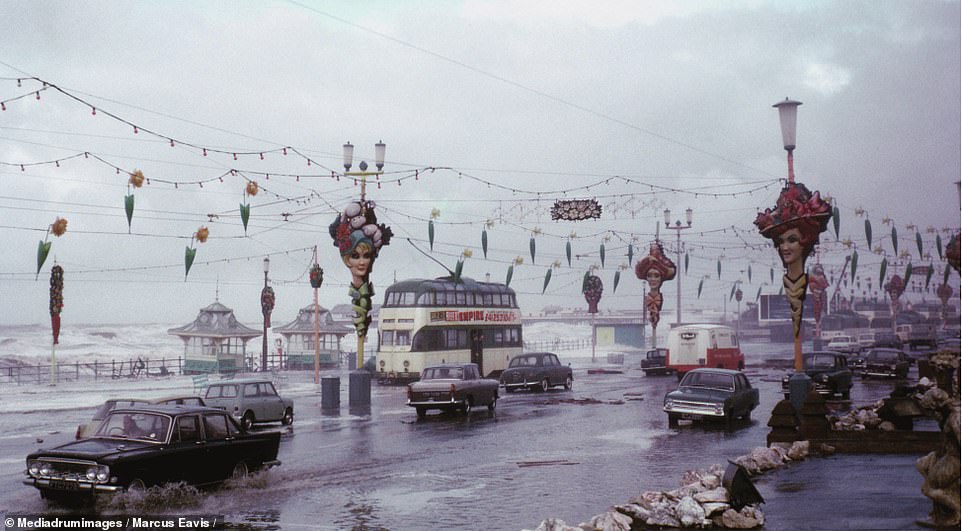 In 1961, waves crashed atop the promenade at the popular resort of Blackpool 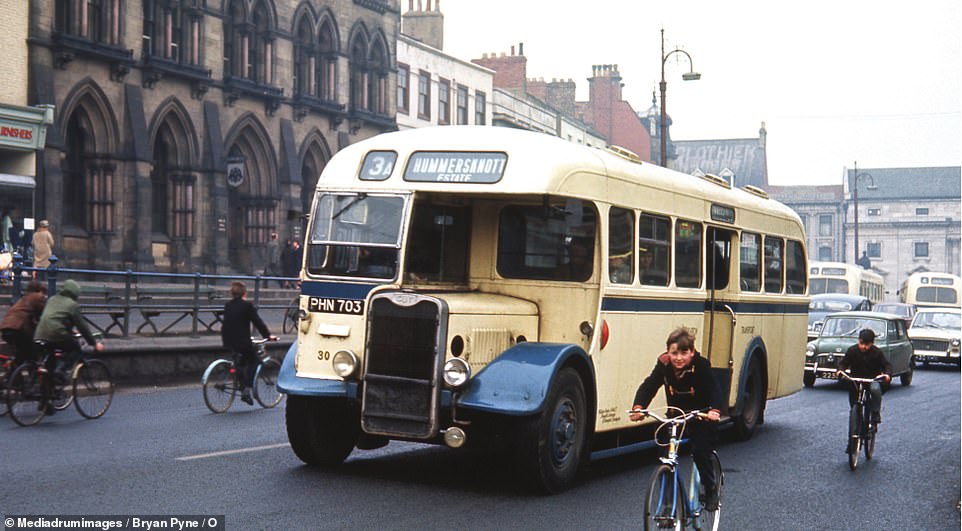 A Darlington Corporation No 30 weaves through cyclists along Prebend Row, Darlington, in 1952 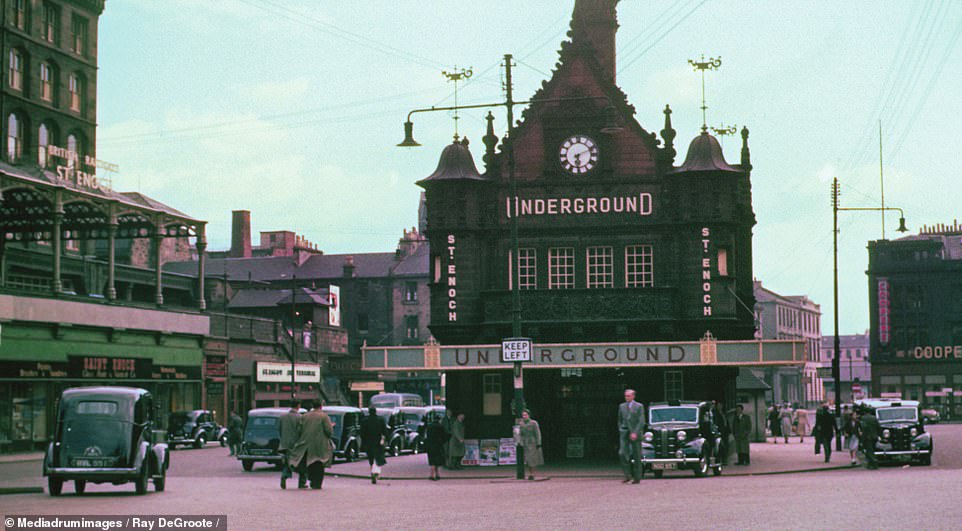 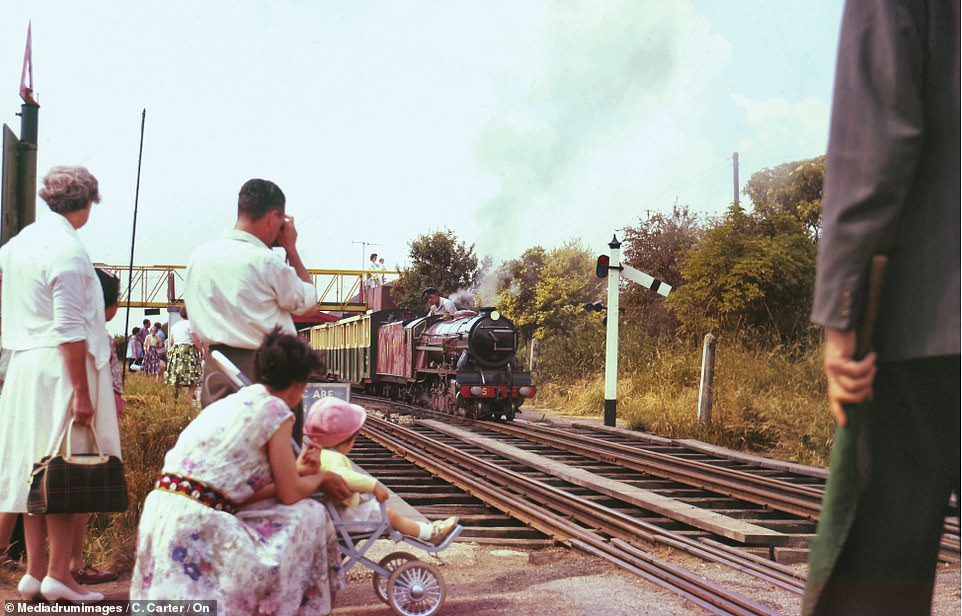 Pedestrians watch a train pulling out of Dymchurch Station on July 7, 1961 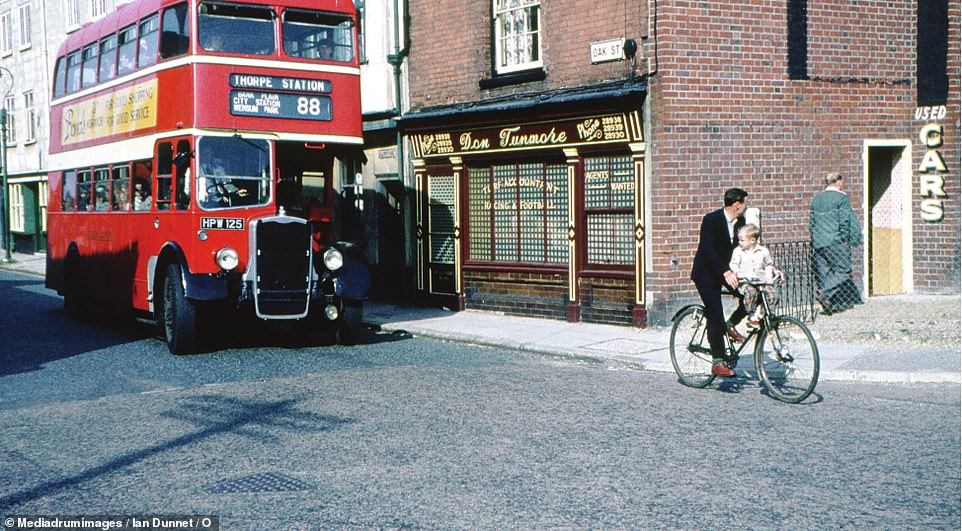 ‘The comparison [between then and now] is extraordinary. Some streets have completely vanished, often as a result of slum clearance schemes, or the buildings simply replaced, for example by shopping malls, whereas some scenes and buildings have barely changed.

‘A handful of the earlier photographs may not reach the expected standard of reproduction but it should be borne in mind, that the photographs in question were pioneers in their field, trying to overcome the practical and cost implications of early colour film in a period when its use in Britain was very limited.’

Photographers began painting photographs shortly after the invention of the form in 1839 but it took until the 1890s for colour-developing images to come into circulation.

Images taken with the plate were reverse processed to produce a ‘positive’ coloured image. This revolutionary technique formed the basis of further colour photography developments.