Jowell is applauded in the Lords after brain cancer speech

Baroness Tessa Jowell won heartfelt applause in the House of Lords today as she returned to Parliament to plead for new cancer treatments.

The Labour baroness delivered an emotional speech to peers in a rare appearance after she was suddenly struck with brain cancer last year.

She said just 2 per cent of cancer funding was spent researching brain conditions and warned no drug breakthroughs had been made in 50 years.

Despite the setbacks, Lady Jowell insisted she had great hopes for breakthroughs that help people ‘live well’ with cancer.

Lady Jowell revealed how she had no symptoms before two ‘powerful seizures’ in a taxi last year. She was told two days later she had a brain tumour that was operated on a week later.

As she ended her speech, peers on all sides of the House stood and applauded the 70-year-old mother of two.

Baroness Tessa Jowell delivered an emotional speech to peers in a rare appearance after she was suddenly struck with brain cancer last year. 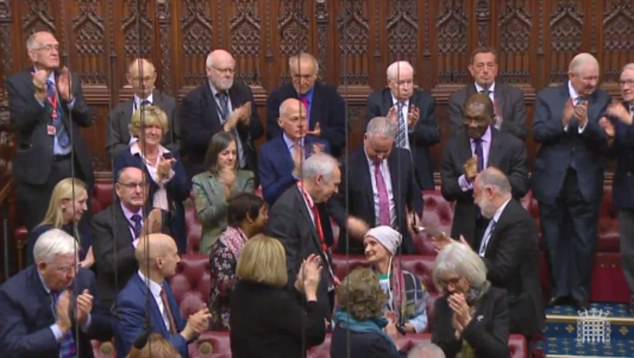 Lady Jowell won heartfelt applause in the House of Lords today as she returned to Parliament to plead for new cancer treatments. She is pictured with Labour colleagues following her speech tonight 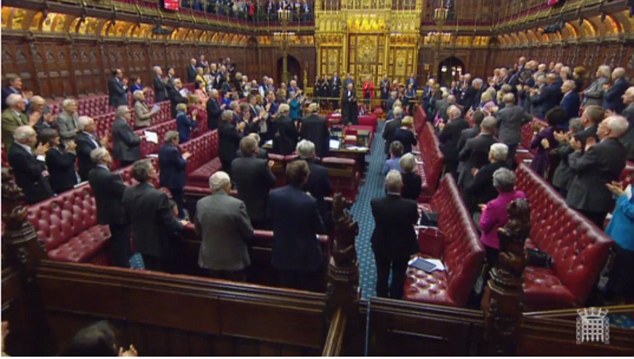 Peers on all sides stood after Lsdy Jowell concluded her speech, in which she said she had ‘great hope’ for breakthroughs to help people live longer with cancer

Health Secretary Jeremy Hunt visited the House of Lords to hear the speech and listened from the steps of the throne.

Lady Jowell: ‘So many cancer patients collaborate and support each other every day. They create that community of love and determination wherever they find each other.

‘All we now ask is that doctors and health systems learn to do the same. Learn from each other.

‘In the end, what gives a life meaning is not only how it is lived, but how it draws to a close.

‘I hope this debate will give hope to other cancer patients like me. So that we can live well with cancer, not just be dying of it.

Lady Jowell, who has two children and three stepchildren – including the food blogger Deliciously Ella – did not have a single symptom before the tumour was found last May.

But in an emotionally-charged interview with the BBC yesterday, Lady Jowell said she is ‘not afraid’ of her illness despite her grim prognosis and is ‘100 per cent focused’ on staying alive.

Her cancer is very advanced and she stumbled over her words several times during the interview – telling the presenter, ‘the tumour bloody well does this to you’.

But she vowed to use whatever time she has left to push for NHS reform so cancer patients are given the right to take on the risk of undergoing different innovative treatments.

She said these ‘adaptive trials’ offer fresh hope and could mean those battling cancer have their lives prolonged – and even saved.

Theresa May praised her ‘moving’ words while Mr Hunt said the Labour peer showed ‘courage and passion’ in speaking out. 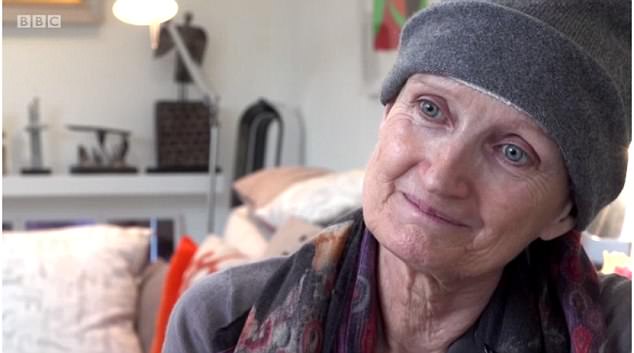 Lady Jowell, 70, (pictured during her interview), who helped bring the 2012 Olympics to London, spoke out about her brain cancer diagnosis and treatment in a moving interview with BBC Radio 4’s Today programme

Speaking out publicly for the first time since since her diagnosis last year, Lady Jowell said: ‘I am not afraid. I feel very clear about my sense of purpose and what I want to do.

‘And how do I know how long it is going to last? I am certainly going to do everything I can to make it a very long time.’

Lady Jowell said: ‘That (adaptive trials) is exactly the kind of risk that patients should be free to take, it should be a risk that they have the chance to take, and it’s certainly what somebody like me wants.

‘I actually see that the opportunity to take this risk is longer than the likelihood of my life surviving for a very long time.’

Lady Jowell served in the governments of Tony Blair and Gordon Brown, and as Culture Secretary helped bring the 2012 Olympics to the UK.

In an interview with BBC Radio 4’s Today programme, she said her diagnosis with a high-grade glioblastoma in May last year had come with ‘no warning’.

She said: ‘I was diagnoses with an acute and very serious form of brain cancer. I had not a single apparent symptom.’

She told presenter Nick Robinson – who was himself treated for a lung tumour in 2015 – that she had not initially realised how serious the situation was and believed she would be able to carry on with her life.

‘I don’t think I immediately leapt to the inevitability of cancer,’ Lady Jowell said.

‘I think that to begin with I thought I would have this tumour, it would be operated on and that would be it. 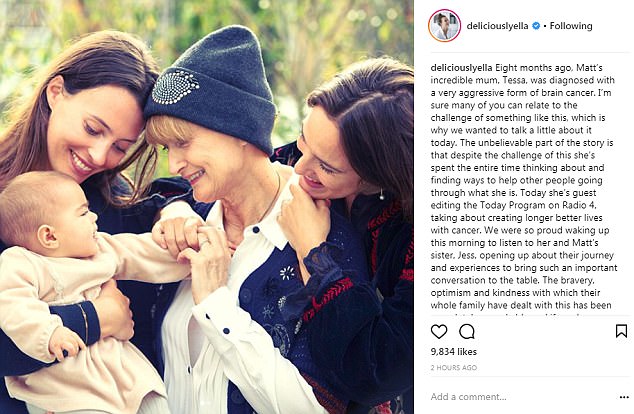 Food blogger Ella Mills, Lady Jowell’s daughter-in-law, posted a tribute to the politician after her appearance on the Today programme 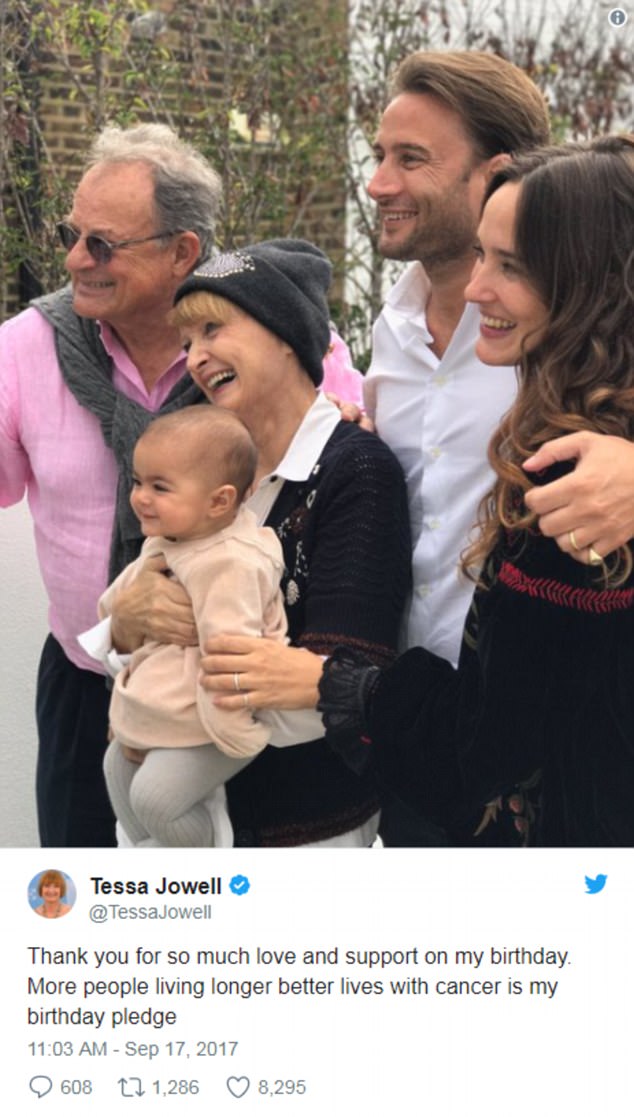 Lady Jowell (pictured with her family), thanked her many well-wishers for their support and vowed to change the system so cancer patients had more options about treatment

‘It is actually much harder now because now my life is day by day affected by the tumour.

‘And affected by the uncertainty of what my cancer is actually going to mean, for how long.’

WHAT IS AN ADAPTIVE TRIAL? A FLEXIBLE WAY TO STUDY NEW DRUGS AND TREATMENTS

An adaptive trial evaluates a medical treatment by observing a patient and adapting the study according to their outcomes.

This can include changing a drug dose or adding in another therapy, without having to finish the original treatment regimen.

Such trials, which were introduced in the 1970s and are still relatively uncommon, allow treatment schedules to be improved as more information is discovered.

The aim is to identify patients who could benefit from the treatment quickly, while minimising trial costs, increasing flexibility and boosting individuals’ outcomes.

Criticisms include changing a drug dose or its length of administration may not reveal long-term side effects.

This knowledge allowed the drug’s effectiveness in I-SPY 2 to be assessed over just six months by monitoring tissue response.

There has been talk of including such trials in Alzheimer’s disease investigations.

As with all medical studies, adaptive trials are regulated by the Food and Drug Administration in the US and the European Medicines Agency in the EU.

Lady Jowell, who was a psychiatric social worker before entering politics, said she has decided to speak out about her own experience because she is determined to drive through change.

She said: ‘It hasn’t been a difficult decision at all because this is something that I feel a tremendous sense of mission about.’

She called for reform of the NHS and medical research, so that patients are given more rights to take risks in search of an effective treatment.

So-called ‘adaptive’ trials can start with one means of treatment and then develop to include others depending on how successful the process is being.

Lady Jowell said: ‘The important fact about an adaptive trial is that it can start, not achieve what you want and then move on to the next version,’ she said.

‘That is how we get the pace of change happening very quickly.’

She added: ‘That is exactly the kind of risk patients should be able to take.’

Lady Jowell was treated by the NHS for her cancer,  but doctors in Britain told her that they could do nothing more for her – so she looked to other countries for her hunt for treatment.

She has been to Germany looking at trying a new immunotherapy, and vowed to keep looking for new ways of tackling the cancer.

‘I got to the point in the NHS in London where I couldn’t be given any more treatment but it was very clear that if I went to Germany then I had a chance of taking out this immunotherapy – a new experiment,’ she said.

‘And I was and I am prepared to try that.’

And she told how has drawn strength in her battle against the potentially deadly disease by the famous late Irish poet Seamus Heaney, who passed away in 2013.

When she delivers her speech to the House of Lords later today, she will quote the Nobel Prize winning poet and say: ‘I am not afraid’.

She told the BBC: ‘I was deeply touched by Seamus Heaney’s last words when he said do not be afraid.

Lady Jowell went public with the news she had been diagnosed with cancer on her 70th birthday in September. 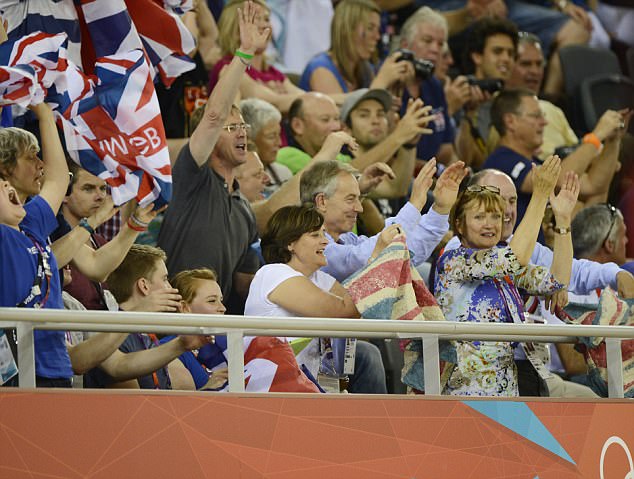 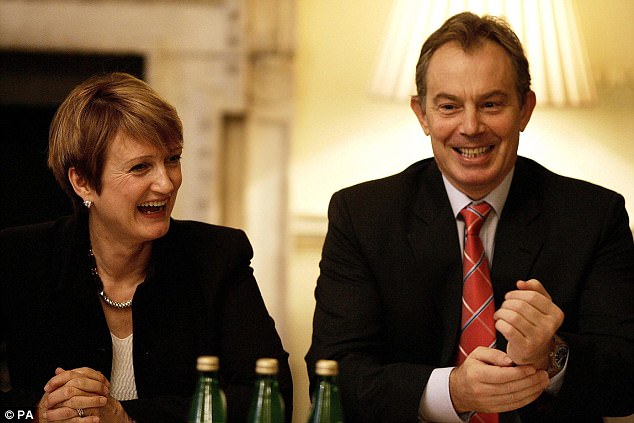 Lady Jowell pictured with Tony Blair in 2005. She served as Culture Secretary under the Labour Prime Minister

And she revealed she has had an outpouring of support, receiving around 2,500 letters from well wishers since then.

She said: ‘I have so much love in my family, my children, my close friends it’s the most extraordinary, blessed and recreating sense and I feel that I want that to be experienced by so many other people as well.’

Lady Jowell’s daughter-in-law, the food blogger Ella Mills, posted a moving tribute to her mother-in-law online after her appearance on radio this morning.

She said the family were ‘proud’ of the way Lady Jowell had spoken about her experience and was focused on ‘helping other people’.

The PM was among the many who praised Lady Tessa in speaking out about her cancer battle.

Speaking in PMQs in the Commons today, Mrs May said: ‘I’m sure that the whole House was saddened to hear of the diagnosis of he noble Lady  Baroness Jowell, but also encouraged by the positive approach she is taking.

‘I am told that Baroness Jowell’s words this morning were very moving.’

Sarah Lindsell, chief executive of The Brain Tumour Charity, said: ‘In sharing some of the issues that face everyone diagnosed with a brain tumour, she will reduce the isolation felt by thousands of people in the UK and around the world who live with the disease.’