Saudi Arabia has declared a national holiday for tomorrow to celebrate their football team’s incredible World Cup victory over Argentina.

All public and private sector employees and students in Saudi Arabia will have the day off on Wednesday after their national team beat Argentina 2-1 in one of the biggest shocks in World Cup history.

The Gulf state is currently ranked a lowly 51st in the world behind hosts Qatar and came into the tournament with low expectations in a group with Argentina, who were tipped by many to challenge for ultimate glory.

But in a truly stunning turn of events, the underdogs sent the team ranked number three in the world crashing to the bottom of Group C with a stellar 2-1 victory.

Saudi fans were pictured performing a Cristiano Ronaldo-style ‘SIU’ celebration en-masse as they filed out of the stadium in giddy scenes of pure joy.

And now, Saudi Arabians can continue their celebrations tomorrow as King Salman approved plans to give all employees and students a national holiday, reports the Saudi Press Agency. 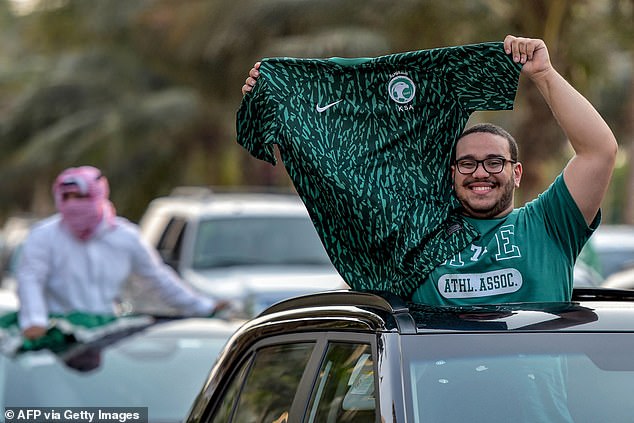 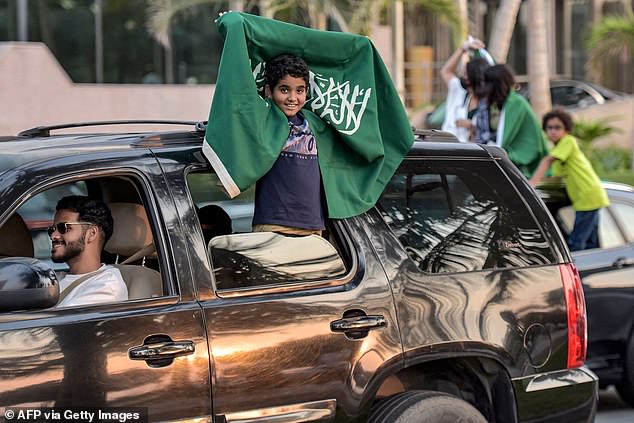 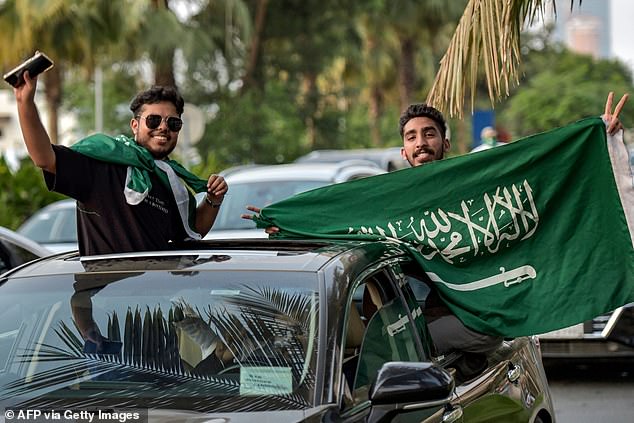 In the Saudi Arabian capital of Riyadh, football fans had gathered to watch their team play against Argentina and as the final whistle blew, the elated fans erupted in joy 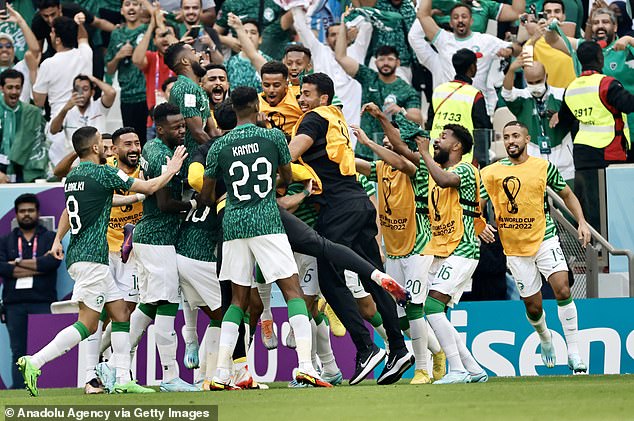 Players of Saudi Arabia celebrate after a goal during their match against Argentina. The underdogs beat Saudi Arabia 2-1 in the World Cup match 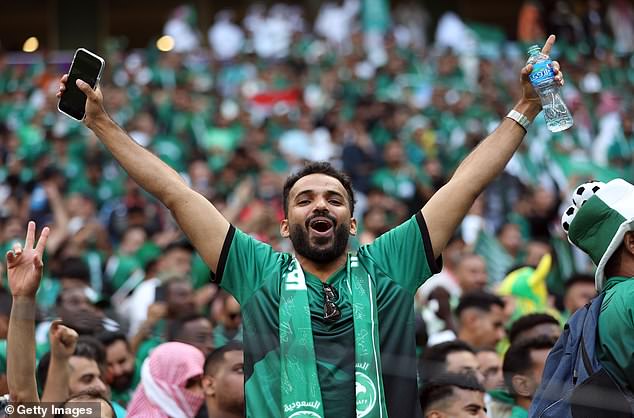 In the Saudi Arabian capital of Riyadh, football fans had gathered to watch their team play against Argentina and as the final whistle blew, the elated fans erupted in joy.

Saudis, including children, waved their national from from the windows of speeding cars as they smiled in disbelief at what their football team had just achieved against Lionel Messi’s Argentina.

A Saudi television station showed a long line of cars with veiled women standing in their open sunroofs waving the Saudi flag in the kingdom.

During the match, Saudi Arabia, the second-lowest ranked team in the tournament after Ghana, were down 1-0 by the 10th minute after Messi scored a penalty.

But Saudi Arabia threw caution to the wind at the start of the second half, charging at Argentina’s defence in front of a frenzied 88,012 crowd.

Saleh Al-Shehri squeezed in a low shot in the 48th minute while Al-Dawsari curled in a scorching strike from the edge of the penalty area in the 53rd minute to leave Argentina and Messi looking utterly shell-shocked in the Group C opener.

A stunned Messi watched as Saudi Arabia’s green-clad fans, who had come over the Qatari border in their thousands, celebrated in disbelief in the stands.

Saudi Arabia’s substitutes swarmed onto the field to congratulate Aldawsari, who sank to his knees after his post-goal acrobatics.

When the final whistle blew, Saudi Arabian fans erupted in jubilant roars, while the players raced around the pitch to hug each other.

‘Thank God, the players were up to it and we wiped them. They were relying on one player, we competed as a team and we wiped them, we are up to it. Watch out for Saudi Arabia because when it hits, it hurts,’ said Saudi fan Abdelaziz al-Khwatem. 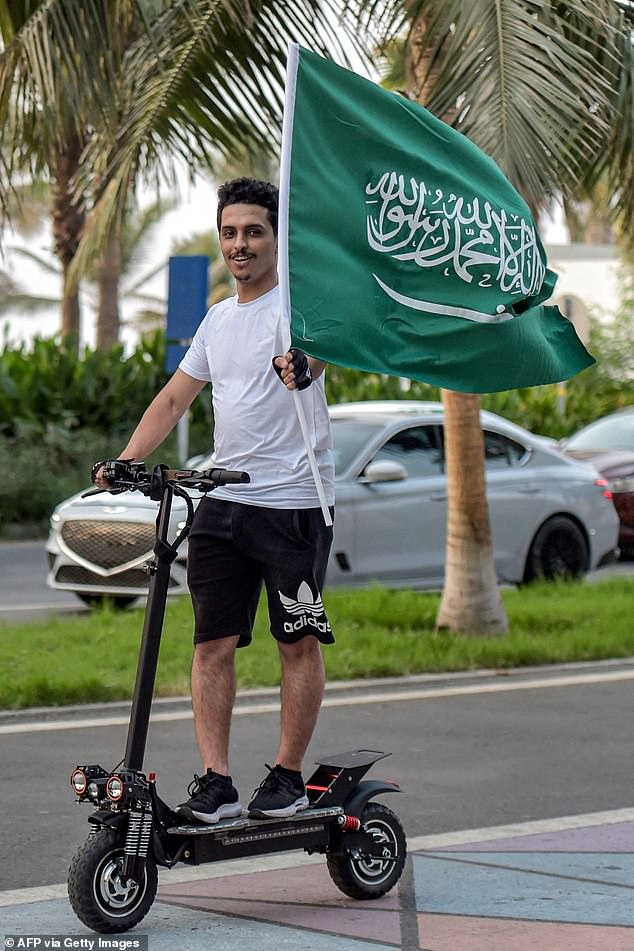 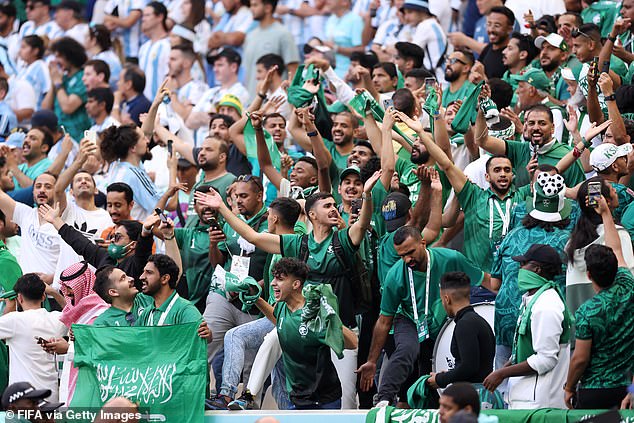 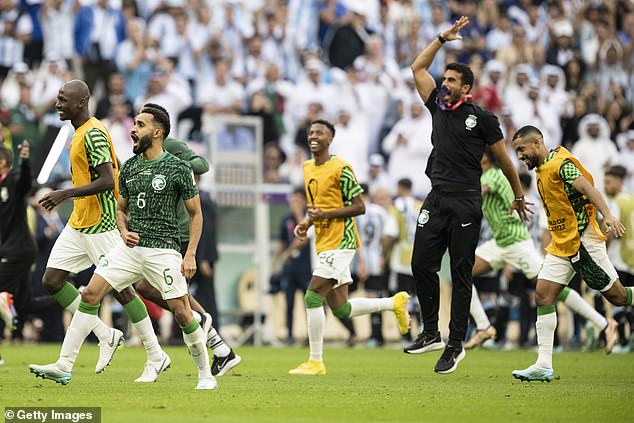 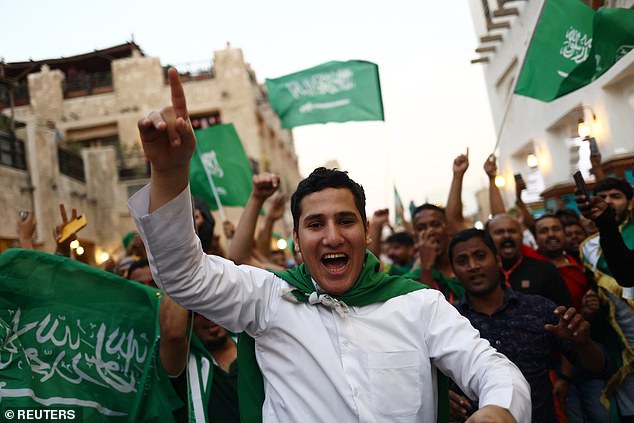 Saudi Arabia fans celebrate in Souq Waqif, Doha, Qatar, after the match between Saudia Arabia and Argentina on Tuesday

‘Wow! I have all the feelings right now. We beat Argentina, one of the great teams!’ said Saad, a fan from Riyadh who is in Qatar for two weeks and was wearing a green Saudi Falcons scarf around his neck.

‘Our guys played so well – everything went right inside the stadium today. It was amazing.’

‘One for the books,’ Saudi Arabia coach Herve Renard said. ‘This is football. Sometimes things are completely crazy.’

Saudi Arabia’s previous biggest win was 1-0 over Belgium at the 1994 World Cup, secured by a storied individual goal by Saeed Al-Owairan.

With games to come against Poland and Mexico, Saudi Arabia now have a chance to reach the knockout phase of the tournament for only the second time in six attempts, having reached the Last 16 on their debut in 1994.