The Amtrak engineer who caused the deadly 2015 Amtrak train derailment in Philadelphia has been cleared of all charges.

Brandon Bostian, 34, was charged with involuntary manslaughter in May after reports emerged he was going 106mph when he took a 50mph curve, causing the train to derail, killing eight and injuring more than 200.

A Philadelphia police officer testified Bostian also had an electronic tablet on him at the time of the crash, although that crucial piece of evidence disappeared before it could be examined by federal investigators to see if it was being used while Bostian was operating the train.

But at Tuesday’s preliminary hearing, Judge Thomas Gehret said he feels like the deadly crash is ‘more likely an accident than criminal negligence,’ NBC News reports.

Brandon Bostian, the Amtrak engineer involved in a fatal train crash two years ago, has been cleared of all charges (pictured turning himself in earlier this year) 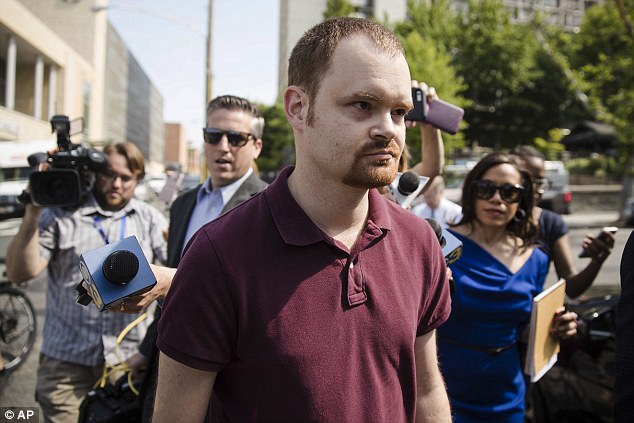 The 34-year-old engineer was arrested in May after the family of one of the victims filed a private criminal complaint against him. He’d previously been cleared after prosecutors said there wasn’t enough evidence to prosecute.

Just minutes after leaving Philadelphia on May 12, 2015, on a Washington-to-New York run, the train accelerated to 106 mph on a 50 mph curve, derailing in a crash that killed eight people and injured about 200.

The National Transportation Safety Board found that Bostian essentially forgot where he was when he sped up.

Philadelphia prosecutors had decided not to charge him, but a judge acting on a private criminal complaint from a crash victim’s family ordered misdemeanor charges filed. 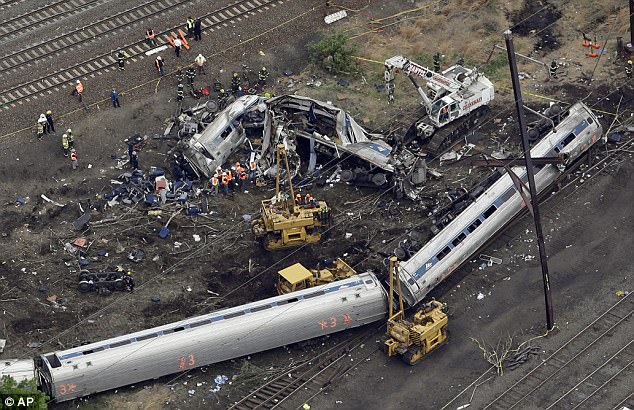 On May 12, 2015, during a journey from Washington, DC to New York, at 9:10pm, Bostian accelerated to 106mph on a 50mph curve, which caused the train to derail (Pictured, an aerial shot of the wreckage) 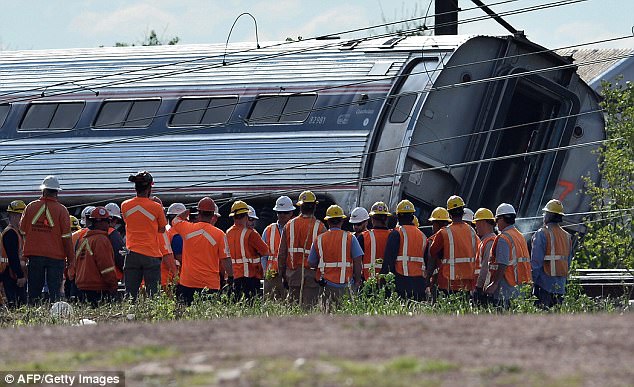 Eight of the passengers were killed and more than 200 of the 238 were injured (Pictured, rescue workers asses the wreckage) 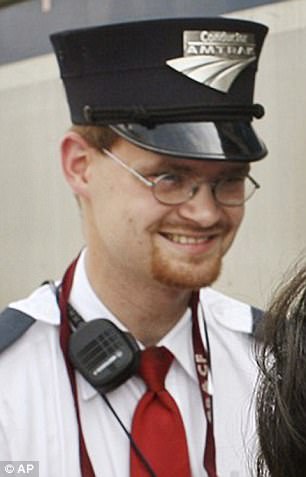 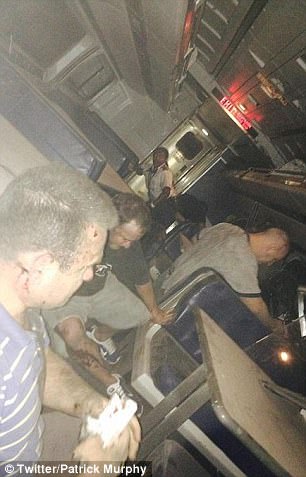 Bostian was initially cleared of criminal wrongdoing in May, but was charged again after the family of a crash victim brought a civil lawsuit. (Bostian pictured left in 2007 outside a train at the Amtrak station in St Louis, and passengers aboard the train steady themselves just moments following the crash)

The case was referred to the state attorney general, who added a felony count of causing a catastrophe on top of eight misdemeanor counts of involuntary manslaughter and other charges.

The citizen complaint against Bostian was brought by attorneys for the family of Rachel Jacobs, a 39-year-old chief executive of a Philadelphia-based technology startup who was killed returning home to her husband and two-year-old son in New York.

Just days before a two-year statute of limitations was to expire, Philadelphia prosecutors announced they had concluded there was insufficient evidence to prove that Bostian acted with intent or ‘conscious disregard’ for the passengers’ safety.

But victim lawyers argued that should be an issue for a jury to decide. 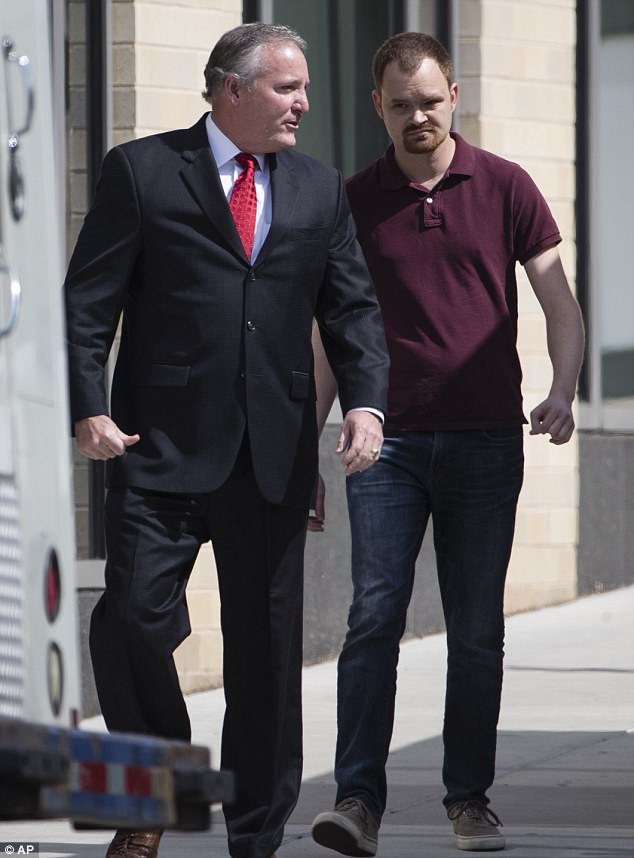 The 34-year-old was seen walking to a Philadelphia police station to turn himself in last May, with someone who appears to be his lawyer 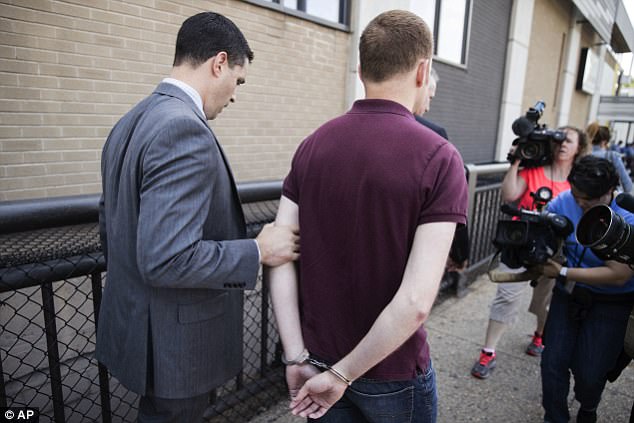 He was escorted inside the police station where he faced eight charges of involuntary manslaughter. Those charges have since been dropped

The case brought closer scrutiny to the National Transportation Safety Board (NTSB) finding that Bostian had lost ‘situational awareness’ on the curve in North Philadelphia.

The speed limit climbs from 50mph to 110mph about a mile and a half after the curve.

Amtrak has taken responsibility for the crash and agreed to pay $265 million to settle claims filed by victims and their families.

The NTSB found no evidence that Bostian was impaired or using a cellphone. The agency also called Amtrak’s long failure to implement automatic speed control throughout the busy Northeast Corridor a contributing factor. 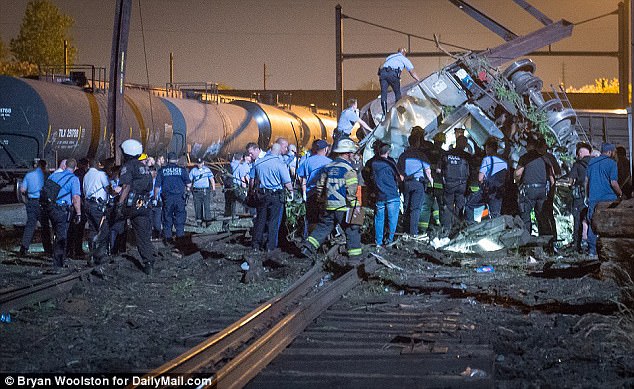 In a lawsuit against Amtrak, Bostian said he was left disoriented or unconscious when something struck his train before it derailed (Pictured, rescue workers search for survivors among the wreckage)

Bostian has a personal injury suit pending against Amtrak, saying he was left disoriented or unconscious when something struck his train before it derailed.

He had heard through radio traffic that a nearby commuter train had been struck by a rock. However, the NTSB concluded that nothing struck his locomotive.

Federal investigators believed he was distracted listening to radio traffic that a nearby commuter train had been struck by a rock and lost track of where he was.

‘One thing he has never recollected is how or why he accelerated before the curve,’ said attorney Robert Mongeluzzi, who with Kline represents about three dozen victims.

Other lawyers have called last year’s NTSB report on the crash a ‘whitewash’ and a ‘quantum leap.’