Judge Rinder got hot under the collar today on GMB while wearing a vest that mimics one of the symptoms of the menopause to help men ’empathise’.

The presenter was hosting today’s show with Charlotte Hawkins and wore the vest to discuss the issue of menopause with Carolyn Harris MP, the chair of the all-party parliamentary group on menopause, and Dr Hilary.

The vest is meant to raise awareness of one of the symptoms women have to go through once they enter menopause.

Carolyn Harris said she feels the vest is a great way to make break the taboo around menopause and to make the discussion of symptoms more ‘mainstream.’

However, GMB viewers didn’t share her sentiment and said it was a ‘patronising’ move to make Judge Rinder wear the vest.

‘I’m not sporting a new fashion or auditioning to be in Line of Duty. This is a meno-vest,’ Rinder said, showing off the vest on the show.

He had only been wearing the vest for five minutes, but joked it felt like ‘five years.’

‘It’s been heating up parts of my chest and neck and it’s meant to mimic hot flushes, one of the 40 symptoms experienced during the menopause,’ he explained.

‘And it’s used a bit to increase men’s empathy with women suffering with the condition. 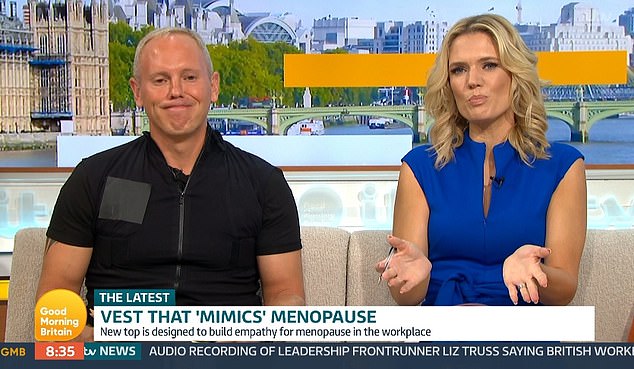 Robert Rinder put on a vest mimicking menopause-induced hot flushes on Good Morning Britain, but the move was not well-received by viewers. 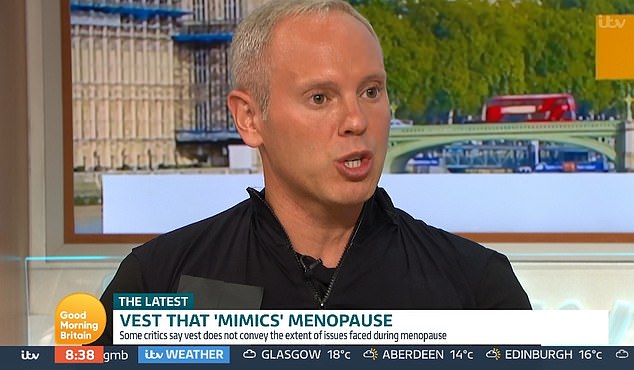 Judge Rinder joked he was ‘boiling’ after 10 minutes wearing the vest, and said he was getting ‘flushy’ 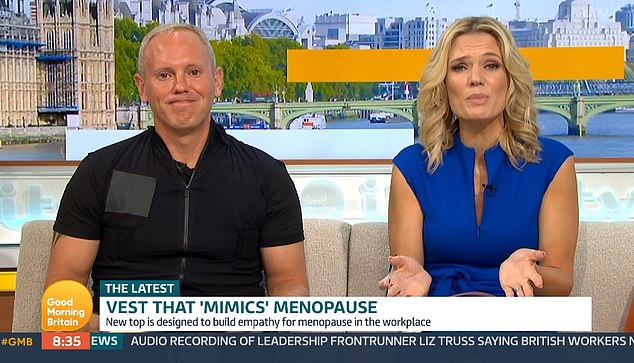 ‘My neck is getting hot, I am getting a bit flushy,’ he admitted.

Charlotte lead the discussion on the vest, telling Carolyn Harris: ‘I guess it’s an interesting way for men to get insight. There is a whole of load of symptoms, not just the hot flushes.

‘They have such an impact that I think have not been understood, have not been taken on board. It’s good now to be able to talk about it,’ she added.

‘The vest is the only symptom you can simulate. You can’t simulate anxiety and depression and the feeling of worthlessness,’ Carolyn agreed. 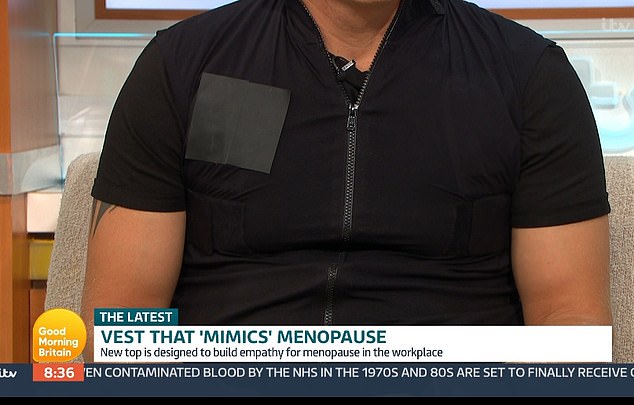 ‘The vest has been brilliant to raise awareness so that people talk about it. If we talked about it, as a mainstream subject, we wouldn’t have the problems in the workplace that we’ve got.’

She also stressed that there is a 16 per cent higher rate of suicide among menopausal women.

‘So few MPs have been able to make a lasting contribution and it’s one here. It’s not just about me heating up, here. It’s also about the lack and absence of HRT,’ Robert Rinder said.

‘Women go their doctor, they’re either turned away or can’t get access to the meds,’ he added. 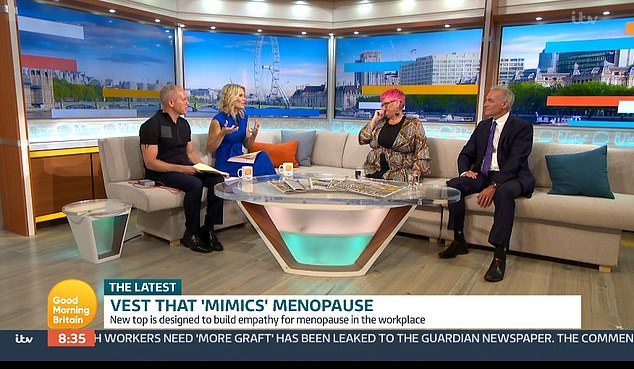 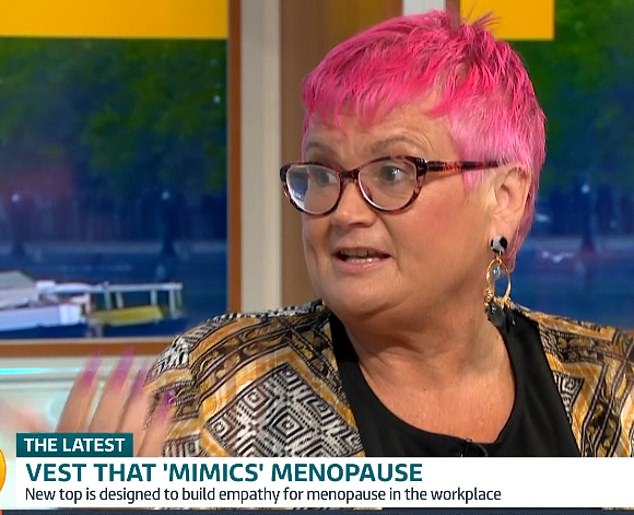 ‘In your case, you ended up going private, for most people in the country that’s completely financially out of reach.’

The presenter also added that women in England have to pay for their HRT prescription, which is not the case in Wales and Scotland.

Carolyn Harris raised the double standard of this issue.

‘If you are a man and you can prove that your sexual health is impacting your mental health you can get free Viagra, whereas as a woman, you have to pay for your HRT,’ she said.

‘Which I find absolutely appalling. An it’s something I’ve tried to rectifying and I thought I’d got there but unfortunately we’ve been let down on that point,’ she added. 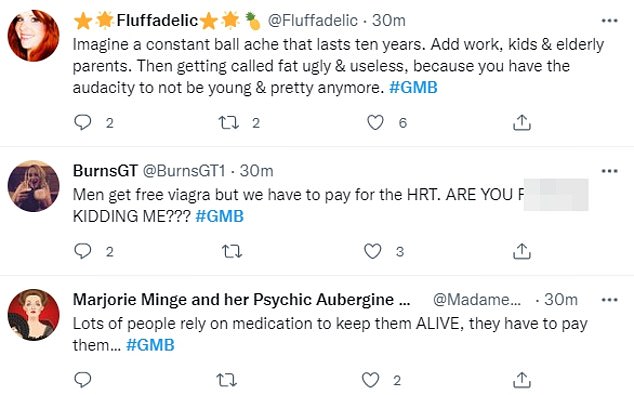 Viewers asked what the point of the vest is, while some said the world has gone mad. Some also said they didn’t see the issue with women paying for their HRT prescription

‘If blokes in their 50s and 60s were heating up like this and sweating every single day, so they couldn’t work, they couldn’t function and they had depression and we knew that there was an actual cause that we could help with, wed solve that problem pretty quickly,’ Robert said.

‘Billions of pounds went into research and development of Viagra,’ he added.

Dr Hilary agreed and said the problem needs to be addressed because it affects: ‘half the population, for half their life,’ and has been ‘neglected’ for years.

He added that the psychological symptoms of menopause, including insomnia, anxiety and depression, are very common.

And while Hormone Replacement Therapy (HRT) helps with the symptoms, the country is suffering a shortage.

Dr Hilary explained it is because the demand for it has increased in recent years, and because there is a shortage of the materials used to make the meds as well.

Carolyn  stressed that it takes most women ‘seven to ten consultations to be told they are menopausal,’ because GPs sometimes are reluctant to diagnose women and prescribe them with HRT.

However, some viewers were not impressed with the vest stunt, and said it was ‘patronising.’

‘What is the point in the menopause vest for men?’ one asked.

‘This menopause vest is a tad patronising! What’s next, a vest to mimic pregnancy symptoms,’ another said.

‘Yeah cause blokes don’t suffer with depression do they, check the stats out for suicide in young men before whining about being a bit sweaty,’ another wrote.