A district judge who plundered nearly £800,000 from customers of his law firm to fund a party lifestyle with his lover has been ordered to pay back just £51,938.

Simon Kenny, 60, and his assistant Emma Coates, 48, splashed out on lavish trips while ransacking funds at CK Solicitors in Selsey, West Sussex, over four years.

She also treated friends to all-expenses paid trip to the Cheltenham Festival and a £27,000 holiday to Barbados.

But while the couple lived a life of luxury their accountant became so depressed at their betrayal that he killed himself.

The ex-lovebirds were each jailed for six years after turning against one another during their subsequent trial.

Judge Peter Testar opted to sentence the devious duo on the basis of a fraud totalling £777,519 rather than the near £1 million originally claimed by prosecutors.

He said at the time: ‘It is difficult to imagine a more spectacular breach of trust by someone running a legal practice to the clients of that practice.’

Today, the pair appeared before the same judge who ordered they must pay back a total of £51,939.

Judge Testar ordered Kenny repay £51,938 and ordered Coates to pay a nominal fee of £1 because she is bankrupt and has nothing left. 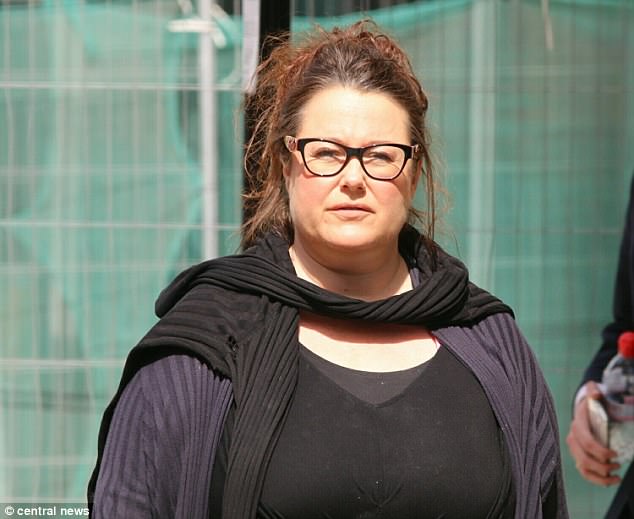 Coates (shown at a hearing in January), who swindled £85,000 from an elderly client’s will after she died, built up a property portfolio, and spent £15,000 on a log cabin

Police later discovered she had been making mortgage payments on four properties – two in Selsey, and two others in Chichester and Bognor Regis.

The judge said an application could be made to seize any future assets if they are found.

‘Just in case there is a visitor from Mars sitting in this court room who thinks this is a bit peculiar,’ Judge Testar said.

‘The reason for all of this is that in case there is a pot of gold, then there can be a hook on which an application can be hung.’

Kenny, who has business interests in the Far East, informed staff he had moved cash to offshore accounts because of the Northern Rock bank crisis.

It led to the closure of CK Solicitors and a major investigation by the Sussex Police major fraud unit. 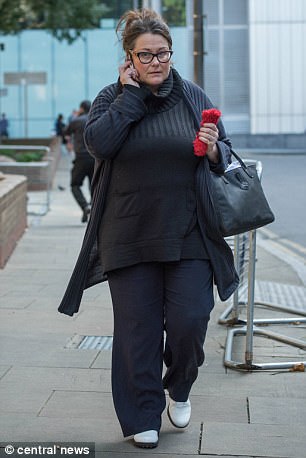 Kenny was suspended from his role as a deputy district judge at a county court in Sussex while he stood trial for two counts of fraud.

The company’s reporting accountant Robert Foskett committed suicide after he ‘realised he had been lied to’ about the con.

Prosecutor Richard Milne said during the trial: ‘Mr Foskett’s dawning realisation in February 2011 that he had been duped back in 2009 appears to have been a major factor leading, tragically, to his suicide on 6 March 2011 – just two days before the commencement of the first of the relevant SRA investigations.’

Jurors saw his suicide note, which read: ‘I am so sorry but the pressure mounts on me. I was lured into signing an audit certificate by Simon Kenny which I should not have.

‘He assured me funds would be the following week from his family trust but that became untrue.’

Mr Foskett also left a note to his secretary which read: ‘It has been revealed to me that I think with Simon Kenny we have stumbled on a fraud that is probably £300,000, it may even be £600,000 or even more.

‘Quite nasty – unfortunately when people do this sort of thing they don’t care a damn who gets hurt.’

Kenny also told Mr Foskett that the money had been sent abroad to protect it from the financial crisis.

Stephen Hiseman, 61, a ‘fee earner’ from CK Solicitors, also swindled two clients and was before the court.

He will be before the crown court on 15 December for a full confiscation hearing.

The court heard he ‘fraudulently caused the transfer of £60,000 from CK Solicitors client account to an account of Chris Coxill and then to an account in his name’ between November 2010 and March 2011.

Hiseman also told client Samuel Swanton he had settled his debts with Lombard North Central for £15,000 between June 2010 and December 2011 – but he had actually only settled for £10,000, forcing Mr Swanton to sell his house to raise extra funds.

The Solicitors’ Regulatory Authority shut down CK Solicitors in May 2011, but within months Coates had set up another firm, Coates and Co, and stole £85,000 from an elderly client’s will when she died in 2011.

She was on bail at the time.

‘In the case of Mr Kenny and Miss Coates, the misappropriation mainly took the form of diverting client money from the company’s client account to the office account and then spending that money not in relation to the client matter in question, but for their own use or for the use of the firm.’

Hiseman, of Morzine, France, will attend a confiscation hearing on 15 December.

IN ON THE ACT: FIRM’S MANAGING CLERK WAS ALSO A CONMAN 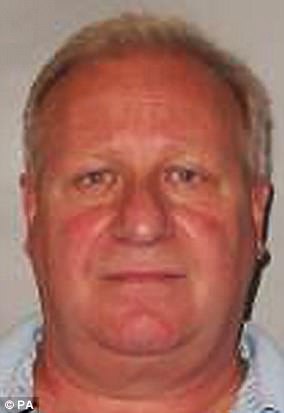 The managing clerk at the firm was also a conman, the court heard.

Stephen Hiseman, right, posed as a solicitor to blag £65,000 from desperate debt ridden clients despite having no legal qualifications in a ‘cheap, mean and nasty little fraud’.

The 60-year-old was the managing clerk ‘fee earner’ at CK Solicitors specialising in debt management when he moved £60,000 from client Roy Kelly into his own account.

The money has since disappeared, the court heard.

The desperate Mr Swanton had to sell his house to raise the extra funds.

Michael Stradling, defending, said Hiseman had made efforts to pay the money back but his cash was tied up in a long running litigation dispute over a chalet in France where he lives.

Hiseman never shown remorse his deception saying that he had reduced Mr Swanton’s debt considerably and the £60,000 was actually owed the Halifax bank so the client did not lose out.

Both the duped clients believed or assumed Hiseman was a solicitor despite having no legal qualifications, the court heard.

Judge Peter Testar said: ‘Mr Hiseman had simply kept the £5,000 for himself.

‘It was a cheap, mean and nasty little fraud.’

Referring to the fraud of Mr Kelly the judge said: ‘It certainly did not belong to Mr Hiseman to do with what he saw fit, which is entirely what he did.’

‘It was an abuse of position.’