A lawyer was bludgeoned over the head and strangled by her cocaine dealer in her home.

The dealer, Aminul Islam, 31, smashed Joanna Ogden’s iPhone into her skull four or five times, throttled her and threatened her with two kitchen knives before he was interrupted by a neighbour and fled.

Mrs Ogden, 32, whose mother is a circuit judge at the Old Bailey, had been buying cocaine from Islam for several months before the attack, a court heard.

The violent drug dealer was this week jailed for ten years for the brutal beating. Mrs Ogden, a commercial solicitor, thought Islam would kill her.

Brutally beaten: In a victim impact statement, Joanna Ogden, 32, (left) who is now heavily pregnant, said: ‘He came here to take my life. I was already vulnerable and this situation has made it worse’

She suffered a fractured eye socket, cuts to the face and skull and severe bruising to the neck when Islam attacked her after coming round to deliver drugs on November 13 last year.

Mrs Ogden, a senior associate counsel for financial services firm TP ICAP, was off work at the time because of mental problems, which have worsened since the beating, Winchester Crown Court heard.

The attack has left her terrified to leave the house. She now has no desire to socialise, and the ordeal has had a ‘significant detrimental impact’ on her relationship with her partner.

In a victim impact statement, Mrs Ogden, who is now heavily pregnant, said: ‘He came here to take my life. I was already vulnerable and this situation has made it worse.

‘I still do not feel comfortable being in my house alone. I have had extra reinforcements put on to my front door, which I still have to lock when I am in the house alone. Every time the doorbell goes I get nervous and have to check to see who is there.’

The pair were in Mrs Ogden’s kitchen in Shepherd’s Bush, west London, when Islam attacked her after he was asked to leave.

He smashed her around the head with the mobile phone then forced her to the floor where he choked her and covered her mouth to muffle her screams. He also hit her in the face repeatedly, the court heard. 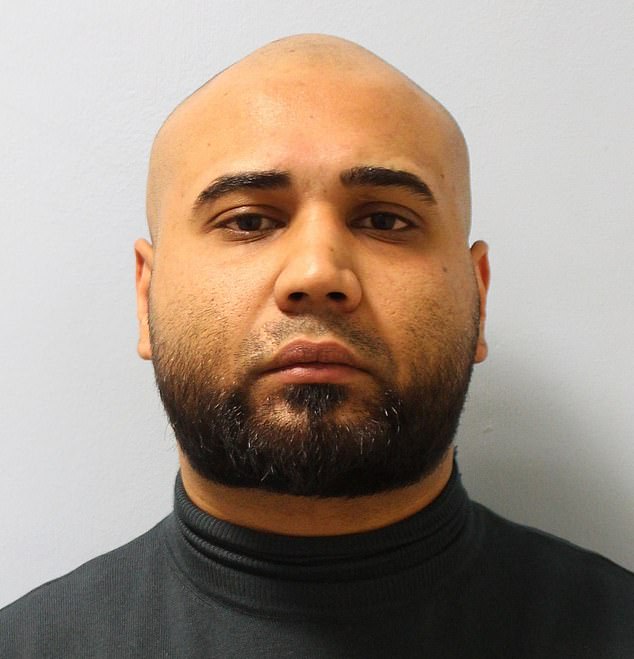 Drug dealer: Aminul Islam, 31, smashed Joanna Ogden’s iPhone into her skull four or five times, throttled her and threatened her with two kitchen knives in her kitchen in Shepherd’s Bush, west London

The Bristol University graduate wriggled free and Islam grabbed two kitchen knives but was interrupted by a neighbour who had heard her screams.

Islam ran from the house with the knives and Mrs Ogden’s phone, leaving her collapsed on the floor covered in blood.

After his arrest, Islam claimed he had been acting in self-defence and said she owed him £4,500.

Judge Susan Evans QC dismissed this claim but accepted that Islam had been delivering drugs to her and that she had not disclosed the extent of this arrangement.

‘You went to her home by arrangement to deliver cocaine,’ she said.

‘I found that your acquaintance with her was greater than she would accept. She had been using cocaine for several months and you had been delivering it.’

The judge added: ‘While she was working in the kitchen you hit her four or five times in the head, forced her to the floor and began to strangle her.

‘She was terrified because she honestly believed that you were going to kill her. You put your hand over the mouth to prevent her from screaming. When she next saw you, you were holding two knives. She remembers nothing more, but it is clear from extensive facial injuries that you hit her in the face repeatedly.’

Islam, of Southwark, south-east London, had originally been charged with attempted murder but this was dropped after he pleaded guilty to the lesser offence of wounding with intent.

He wept and held his hands in prayer as he was jailed.