A tennis coach at an upmarket club was demoted and had her working hours reduced after returning from maternity leave, it has been claimed.

Stephanie Norris, who has begun a legal action against the Scots club, has the backing of Judy Murray, mother of tennis stars Andy and Jamie.

Highlighting the case on social media last week, Mrs Murray, 59, wrote on Twitter: ‘When a young head coach at one of Scotland’s biggest tennis clubs returns to work after having a baby and discovers she has been demoted and her hours reduced without any consultation.’

She went on to describe the incident as ‘everyday sexism’.

Mrs Murray chose not to name the establishment, but it emerged she was referring to Giffnock Tennis, Squash & Hockey Club, East Renfrewshire, where membership fees can top £636 per year.

Mrs Murray’s intervention prompted a flood of responses from her Twitter followers.

An investigation has also been ordered by the sport’s governing body, Tennis Scotland.

It is understood that Miss Norris, 31, has already formally begun a case at the Employment Tribunal Service. 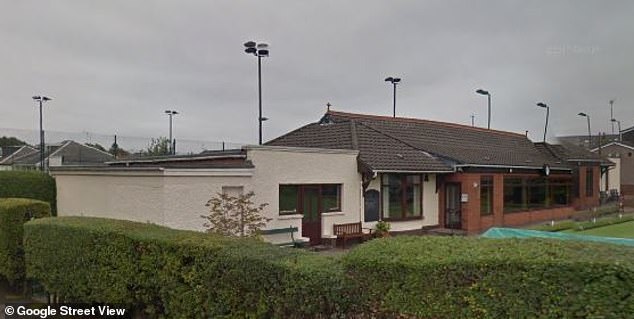 Miss Norris, who got married last month, spent six years at the Giffnock Tennis, Squash & Hockey Club, near Glasgow, where membership fees can top £636 per year

Stephanie Norris, who has begun a legal action against the Scots club, has the backing of Mrs Murry

The Tennis Scotland-accredited coach claims she was forced to accept reduced working hours and lost her role as head coach after returning from maternity leave.

Yesterday at her home in Port Glasgow, Renfrewshire, she declined to comment on the matter because the case is ongoing.

Officials said the club was being represented by a firm of solicitors and was under instruction not to talk publicly about the case.

One club member yesterday spoke of her surprise, saying: ‘Steph just disappeared. We thought she had decided not to come back to work. We didn’t know anything about any employment tribunal case until this weekend.’

In April, Miss Norris gave an interview to a local newspaper in which she spoke about her new role as head coach for the Ardgowan and Fort Matilda clubs, in Greenock, and as tennis development officer for the area.

At the time, she said her daughter was seven months old.

It is understood Miss Norris, who got married last month, spent six years at the Giffnock club.

Judy Murray chose not to name the establishment in the tweet above, but it emerged she was referring to Giffnock Tennis. Miss Norris has brought legal action against the Scots club, and has the backing of Mrs Murray

Mrs Murray also hit out at the lack of opportunities for women in the sport, in the tweet above 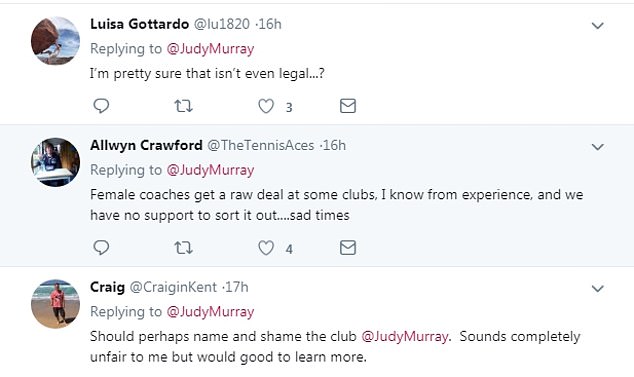 Last night, a spokesman for Tennis Scotland said it had not been approached for assistance by either the club or the coach, but added: ‘We are seeking clarification from the club involved.

‘For the avoidance of doubt, Tennis Scotland is committed to equality both as an organisation and among our membership.

‘Indeed, we wish to cultivate our position at the forefront of equality in Scottish sport, with the help of many partnerships including Judy Murray’s She Rallies programme.’

He added: ‘It is worth noting that 42 per cent of Tennis Scotland’s members are female.

‘Our strategy seeks to continually improve equality, diversity and inclusion at all levels of the sport’.