Julian Assange is replaced as editor-in-chief of Wikileaks

Julian Assange has stepped down as editor-in-chief of Wikileaks – as Ecuador tries to strike a deal with Britain to let him leave the country’s London embassy without being arrested.

The computer engineer, who published thousands of Hillary Clinton’s emails before the US election, will hand over the reins of his website to Icelandic journalist Kristinn Hrafnsson. He will remain the publisher.

Wikileaks released a statement last night explaining the switch was due to Assange being cut off from the world after Ecuador stopped his access to the internet.

Russian diplomats hatched a daring plot to extract Julian Assange (pictured) from London but cancelled the plan just days before because it was too risky, it has been claimed

Assange has been holed up the in Ecuadorian embassy for six years, fearing if he leaves he will be arrested by UK police for breaking bail conditions.

Hrafnsson, formerly WikiLeaks spokesman, said in a statement: ‘I condemn the treatment of Julian Assange that leads to my new role. But I welcome the opportunity to secure the continuation of the important work based on WikiLeaks ideals.’

Assange was ‘given a role at Ecuador embassy in Moscow’

In December 2017 Assange was given a diplomatic role as a councillor in Ecuador’s embassy to Russia, sources told The Guardian.

The move was part of an aborted Russian plan to get him out of the UK.

The alleged plot involved smuggling the WikiLeaks founder in a diplomatic vehicle from the Ecuadorian embassy and moving him to another country by boat or plane.

The extraction was scheduled for Christmas Eve 2017 and was to be overseen by the head of Ecuador’s intelligence agency who arrived in London on 15 December, it was claimed.

But the British government refused to give him diplomatic status so the plan was cancelled.

It comes amid reports that in December 2017 Assange was given a diplomatic role as a councillor in Ecuador’s embassy to Russia.

The move was part of a Russian plan to get him out of the UK – but the British government refused to give him diplomatic status and the plot was aborted, reported The Guardian.

In March Assange fuelled suspicious that he was in league with the Russians by tweeting that he doubted the Novichok assassination attempts in Salisbury were carried out by Russia.

In response, the centrist Ecuadorian President, Lenin Moreno, cut off his access to the internet.

Moreno on Wednesday said that he was negotiating with Britain to find a way for Assange to leave the embassy without being arrested.

He said Assange’s lawyers were aware but declined to provide more details because of the sensitivity of the case.

Assange initially went into the Ecuadorian embassy in 2012 to avoid being extradited to Sweden on sex assault allegations.

The charges have been dropped but Assange fears he will be arrested by UK police for breaking bail conditions by entering the embassy in the first place.

He fears he could then be extradited to the US, where high-level officials have spoken about prosecuting him for stealing classified information.

Moreno said his country will work for Assange’s safety and the preservation of his human rights as it seeks a way for him to leave the embassy.

‘Being five or six years in an embassy already violates his human rights,’ Moreno said on the sidelines of the UN General Assembly. ‘But his presence in the embassy is also a problem.’

Ecuador’s previous left-leaning administration gave Assange asylum in 2012, saying it feared his life was in danger for publishing thousands of diplomatic cables that put US officials in a difficult position.

But Assange’s relationship with the Ecuadorian government has soured since the centrist Moreno became president.

Over the past two years Assange’s access to the internet was suspended on several occasions, as he continued to hack politicians from different countries and made controversial statements on his social media accounts. 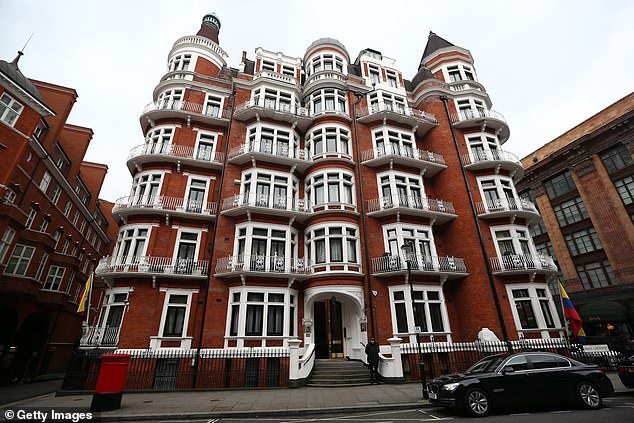 ‘I understand that currently he has no access (to the internet) to stop him from doing that again,’ Moreno said.

‘But if Mr Assange promises to stop emitting opinions on the politics of friendly nations like Spain or the United States then we have no problem with him going online.’

Ecuador’s government has said Assange’s activities in the embassy, including the publishing of thousands of Hillary Clinton’s emails prior to the 2016 election in the US, have compromised its relations with other countries.

‘I don’t agree with what he does,’ Moreno said. ‘To see someone violating people’s right to communicate privately makes me feel uncomfortable.’

Assange has long argued that he is simply monitoring the actions of some of the world’s most powerful politicians and exercising his right to free speech.