A junior hockey player viciously sucker punched an on-ice official during a game in Foxborough, Massachusetts on Sunday and has since been given a lifetime ban by the United States Premier Hockey League.

The USPHL did not identify the player or his team in its statement, but did announce the permanent punishment, adding that the incident is being investigated by local authorities.

A video of the altercation has surfaced on social media, showing a player for what appears to be the South Shore Kings dropping a linesman with a single sucker punch. The Kings were scheduled to host the visiting Wilkes-Barre Scranton (Pennsylvania) Knights on Sunday in Foxborough.

One witness has since confirmed to DailyMail.com that the guilty player was a member of the South Shore Kings, but did not identify him by name.

Foxborough police have confirmed to DailyMail.com that they are investigating the incident, but declined to identify the parties involved, adding that the accused player had left the premises by the time officers arrived on the scene.

It’s unclear if the player was being directed to the penalty box or if he was kicked out of the game entirely, but he responded by skating up to the official and delivering an unprovoked right hook (pictured) 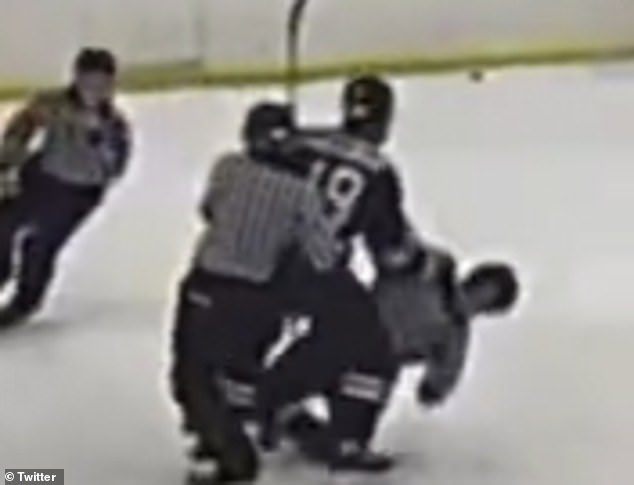 The linesman fell, but did get back up as his fellow officials herded the player off the ice 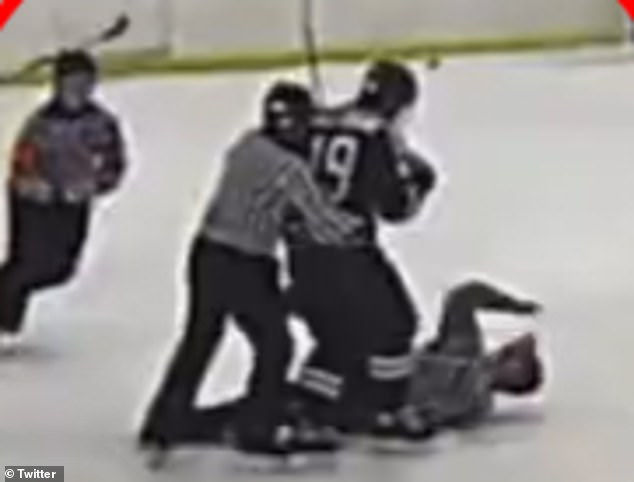 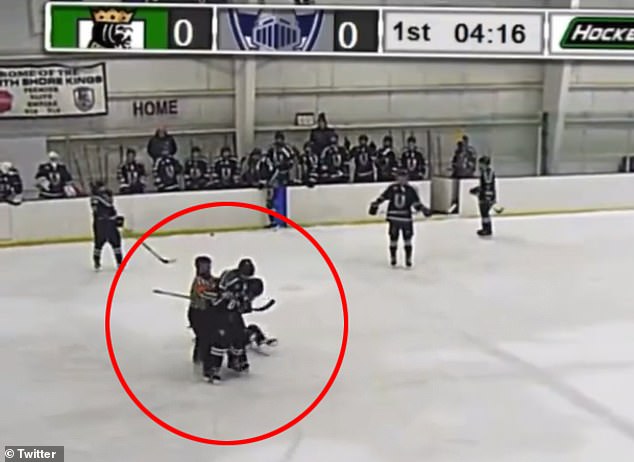 The 20-second clip shows the Kings’ No. 19 getting tangled up with an official along the boards.

The contact appeared to be accidental, or at least it did at first. But the Kings player, who may have been pushed into the linesman, clearly gave the official an extra shove, resulting in an immediate penalty.

It’s unclear if the player was being directed to the penalty box or if he was kicked out of the game entirely, but he responded by skating up to the official and delivering an unprovoked right hook.

The linesman fell instantly, but did get back up as his fellow officials herded the offending player off the ice. 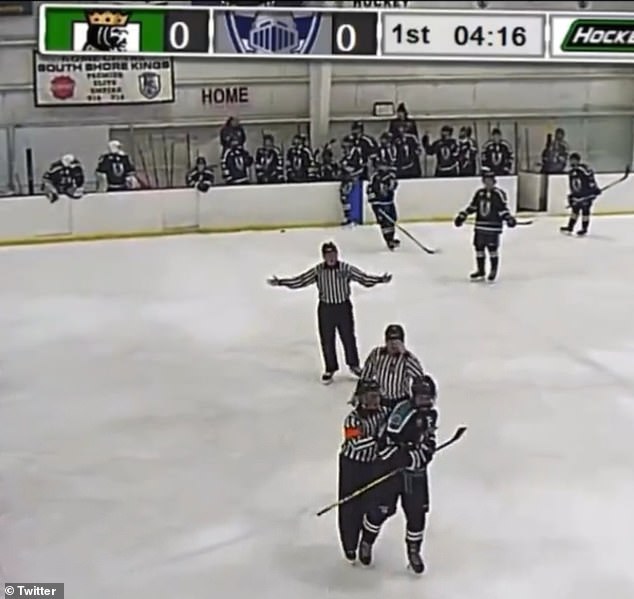 The guilty player is seen being herded off the ice by one of the other officials on Sunday. The linesman who was knocked down is seen in the background raising his arms in the air 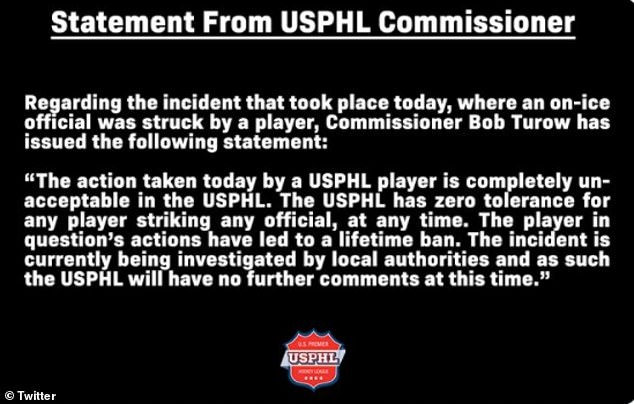 Turow’s statement did not give any indication about the player’s identity.

‘The action taken today by a USPHL player is completely unacceptable in the USPHL,’ Turow said. ‘The USPHL has zero tolerance for any player striking any official, at any time. The player in question’s actions have led to a lifetime ban. The incident is currently being investigated by local authorities and as such the USPHL will have no further comments at this time.’

A spokesperson for the USPHL told DailyMail.com that league commissioner Bob Turow was traveling on Monday, but would be made available when he was off his flight.

Foxborough police are looking into the matter. 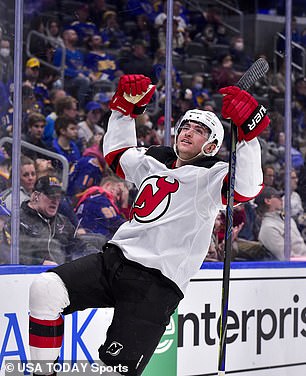 Jimmy Vesey (pictured) played for the South Shore Kings before winning the NCAA’s Hobie Baker at Harvard. He now plays for the New Jersey Devils of the NHL

‘The situation is under investigation by the Foxborough Police and we are aware of the video,’ Foxborough chief Michael Grace told DailyMail.com in an email. ‘We will be gathering more information as we speak to the two parties involved. This investigation is still ongoing.’

Grace declined to identify the parties involved in the altercation.

‘I can’t right now as we were called after the matter had occurred and the player was no longer on the property,’ Grace wrote to DailyMail.com. ‘Still putting the pieces together.’

Junior hockey leagues are not affiliated with the NHL, but rather exist as an alternative to collegiate hockey, or as a back door to an NCAA scholarship.

Although more prestigious junior leagues exist in Canada, such as the Quebec Major Junior Hockey League, the USPHL has produced many NHL players, such as Jack Eichel. The recipient of the 2014 Hobie Baker award was a member of the USPHL’s Junior Bruins before accepting a scholarship to Boston University and later being drafted first overall by the Buffalo Sabres in the 2015 NHL Draft. He now plays for the NHL’s Vegas Golden Knights.

Another player, Jimmy Vesey, played for the South Shore Kings before winning the NCAA’s Hobie Baker at Harvard a year after Eichel. He now plays for the New Jersey Devils.

Most of the players on the South Shore Kings are from the US — primarily Rhode Island and Massachusetts — and are between 17- and 20-years-old. 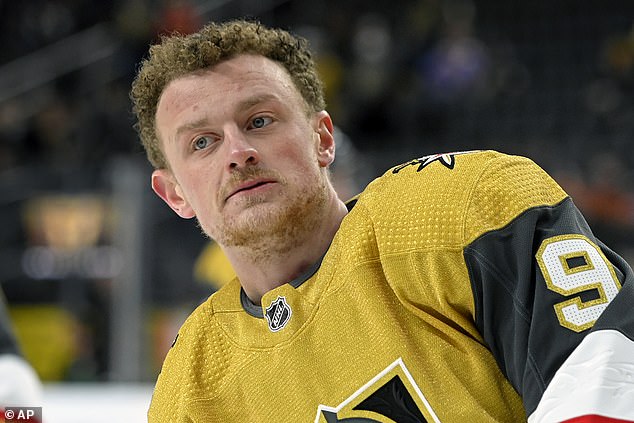 Although more prestigious junior leagues exist in Canada, such as the Quebec Major Junior Hockey League, the USPHL has produced NHL players, such as Jack Eichel (pictured)