Behind the flashing smile and bonhomie, Jurgen Klopp hates to lose finals. Really hates it.

As the manager of Borussia Dortmund, the pain of losing the 2013 Champions League final against Bayern Munich ran so deep he could not stomach looking at the screen the following year when Real Madrid and Atletico played while he was on holiday in Las Vegas.

‘I was by the pool and a lot of people were watching. I was kind of annoyed by hearing the noise,’ he says. ‘I really tried to ignore it because it hurt, it was still painful what had happened the year before.’

There will be plenty of talk about Liverpool’s proud European record before they step out to face Real Madrid in the Champions League final in Kiev next Saturday but for Klopp it also represents a huge personal journey.

He understands the only difference between him and the greatest managers of this generation, Pep Guardiola and Jose Mourinho, is that they have won the biggest prize in club football and he has not. Indeed, the 50-year-old German has lost his last five major finals.

To his credit, he is not trying to hide away from the fact, or that Liverpool’s 2005 Miracle of Istanbul is going to be brought up again and again in the next week.

‘I have no problem with somebody mentioning 2005. It puts no pressure on us whatsoever,’ he says. ‘There’s nothing we cannot talk about before the final. The finals we lost, I lost, no problem. We are only going to play the game in the best way we can do it.’

Real Madrid are the most decorated team in European history, seeking a third successive Champions League triumph. They boast world player of the year Cristiano Ronaldo and have the legendary Zinedine Zidane in their dug-out. 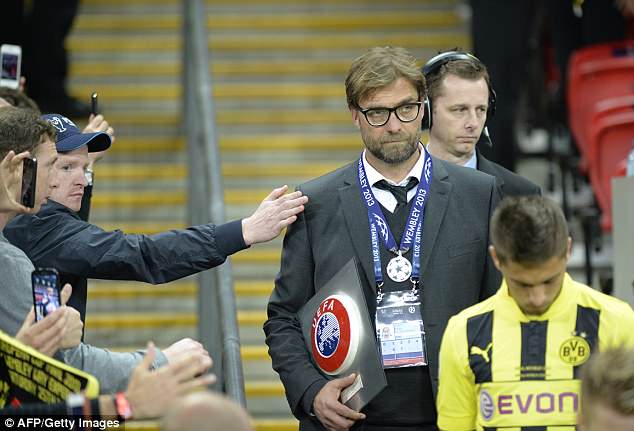 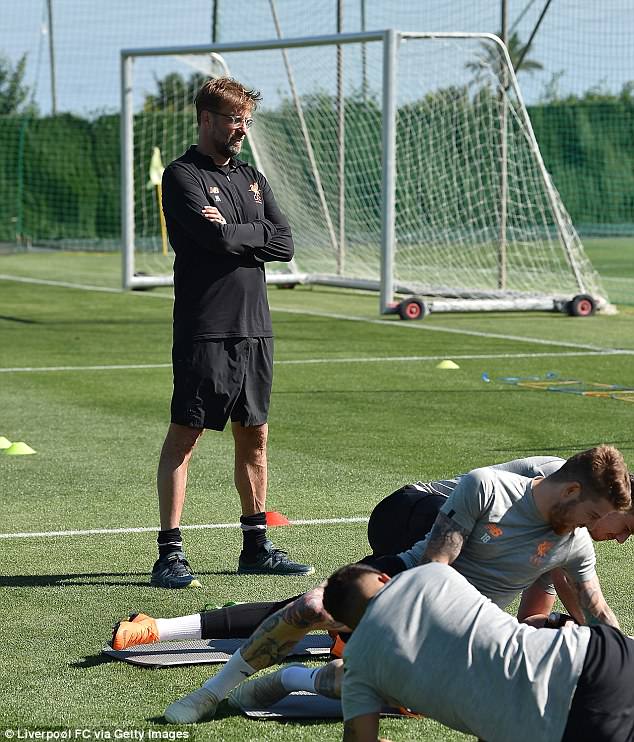 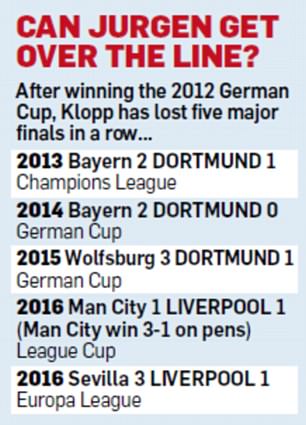 ‘Yes, they are favourites. They know everything, They could write f*****g scripts for finals because they have experienced it three times in the last four years,’ says Klopp. ‘There have been three dominant clubs in the last few years; Madrid, Barcelona and Bayern and we face one of them in the final, so who should be the favourite? I have no problem with the situation.

‘We want to play football and win a football game and thank God it is always possible. We are Liverpool, that’s something not to forget, and we feel that. For me, it is not nice when you lose a final but I will always try again.

‘One of the rules is that the more you try, the more likely that you will do it. But there are no guarantees, if you want guarantees then don’t qualify for a final, stay at home.’

It is easy to forget that Liverpool were eight points off a top-four place in 2014-15, the season before Klopp arrived. Yet, despite the sale of Philippe Coutinho earlier this season, Liverpool have undergone a remarkable transformation under their charismatic coach. 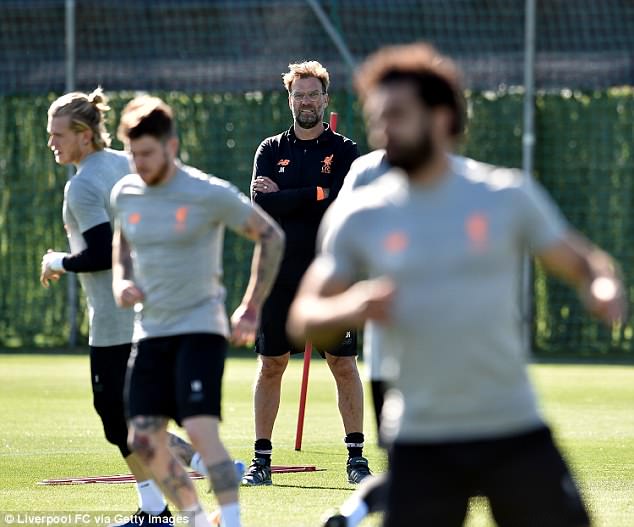 Liverpool have undergone a remarkable transformation under their charismatic coach Liverpool have scored 46 goals in 14 European this season. They put five goals past Manchester City in their quarter-final and hit seven against Roma in the semi-final.

‘When I arrived, the big problems was everybody felt we were never good enough. Maybe because I was here and said otherwise, people said “Come on. Let’s give it a try,”’ says Klopp.

‘You need some luck. We deserved it this season but we had it as well. Now we are there again and it is such a big final for us. Two weeks after a really nice (Premier League) season, we have a fantastic finish. We are looking forward to it, everyone has a smile on their faces. You can pretty much only get that from football. It’s really cool.’ 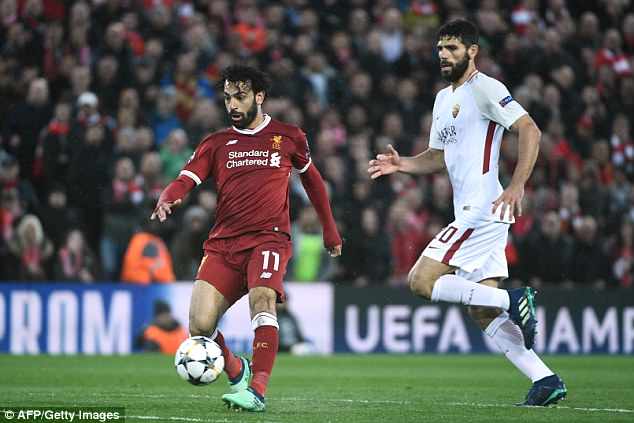 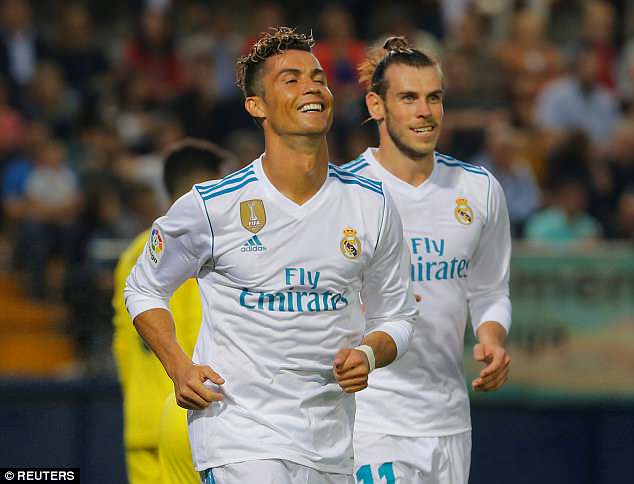 Real Madrid are the most decorated team in European history, seeking a third successive title 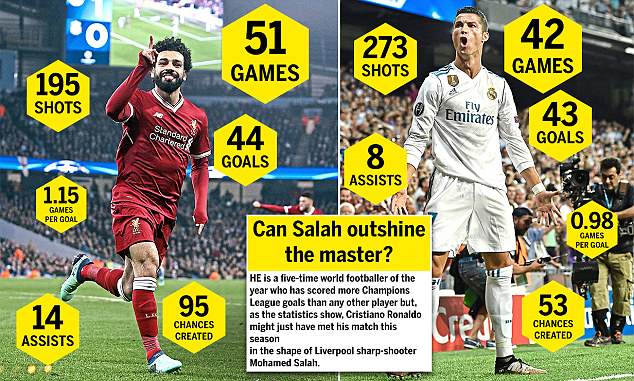 Even so, you would be surprised if Liverpool altered their philosophy — heavy pressing, on the front foot, dazzling interplay between the front three — that has served them well. ‘If I was to ask the boys now “What do you want to do in this game?”, they would say “what we always did”. I am pretty sure that would be the answer,’ says Klopp.

In 2013, Dortmund dominated Bayern for long periods but Bayern scored in the last minute. Has the experience taught Klopp anything? ‘When you are much better in the first part of the game, you should score. It helps a lot!’ he booms.

The flashing smile and bonhomie are back. But you know there are still a couple of personal demons to be buried as well.