Liverpool boss Jurgen Klopp was left frustrated by his team’s showing and body language as they lost ground in the title race after a 2-2 draw at home to Brighton.

Klopp saw his side throw away a 2-0 lead and insisted his players hadn’t followed the rules of attack being the best form of defence.

‘The best way to defend would have been to have the ball (more) and do clever and smart things with it,’ he said.

‘We opened the door for them coming back and we paid the price. Brighton deserved the point. We were really good in certain moments but didn’t play enough football.

‘We didn’t defend the half-spaces so the back line had to drop.

‘Brighton are adventurous. People still don’t respect the quality they have. 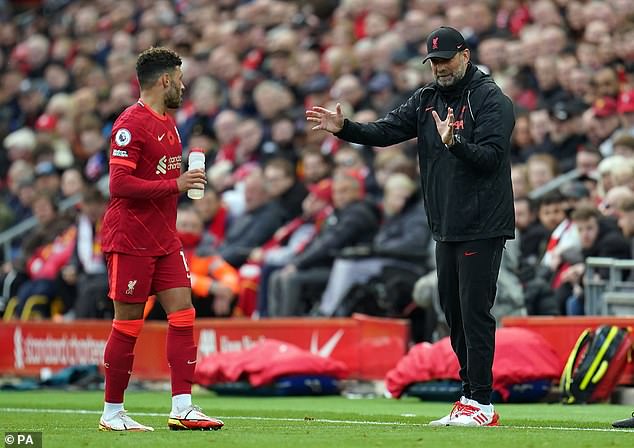 ‘They might not win 35 games a season but in 38 games they will give teams a problem each time.’

After the thrill of beating Manchester United 5-0 last weekend, Liverpool players looked flat after Enock Mwepu and Leandro Trossard cancelled out goals by Jordan Henderson and Mane in the opening 24 minutes.

‘I wasn’t overly happy with the body language of some (players),’ admitted Klopp without giving examples. ‘We can get through periods of some games, but not against Brighton.’

‘It was a strange first 24 minutes because we had opportunities but they took theirs,’ he said. ‘I thought it was a fantastic game from us. We showed courage and bravery.’

Brighton’s first goal by Mwepu after 41 minutes was one of those ‘did he mean it’ a first time strike from outside the box that looped over Alisson into the corner which may have been intended as a cross – or a fantastic shot after spotting the goalkeeper off his line.

‘Whether it was a cross or not, who cares, it was in,’ chirped Klopp.