Almost an hour of the Champions League final had passed when a fine red mist began to spread across the NSC Olimpiyskyi. The zephyrs of a warm Kiev night blew it from the flares that had been set off in the Liverpool end and as it drifted, Liverpool’s players seemed to catch its mood.

James Milner and Andy Robertson bore down on Nacho like two men driven by demons. Jordan Henderson joined the pursuit. They chased and chased. And next to them on the touchline, Jurgen Klopp urged them on, dancing up and down like a dervish.

Klopp’s spirit was everywhere on Saturday night in a tumultuous contest awash with tears and emotion and controversy and anger and recrimination and decided by two calamitous goalkeeping errors from Loris Karius. 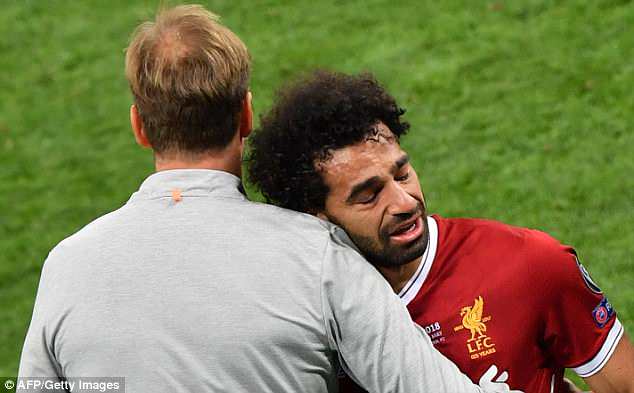 But just as Liverpool seemed to be recovering from the loss of Mohamed Salah through injury and warming to their task after Sadio Mane’s equaliser, that idiot wind carried the ball into the Liverpool box and Gareth Bale’s spectacular overhead kick did the rest.

And so, another triumph in this competition that defines this great club eluded Liverpool. And for all the impact he has made on Merseyside, Klopp will have to wait before he is added to the lineage that runs from Bob Paisley, through Joe Fagan to Rafa Benitez, the managers who have led Liverpool to the most important trophy of all.

His burden, apart from the pain of defeat, will be that he will be saddled for a little while longer at least with the unwanted record of having lost a string of finals. Saturday night’s 3-1 defeat was his sixth in succession and his second in this competition after Borussia Dortmund’s equally wrenching defeat to Bayern Munich.

It wasn’t his night. It wasn’t Liverpool’s night. They were beaten by a better side but when the bitter disappointment starts to fade, Liverpool and their fans will at least be able to reflect on the startling strides they have made under Klopp this season and the brightness of the future that seems to lie ahead. 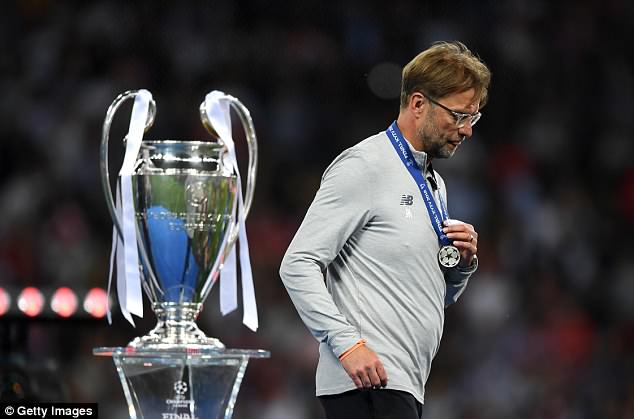 Klopp fell at the final hurdle but the memory of his achievement in driving Liverpool to the final, beating a brilliant Manchester City side along the way, will not fade easily. It has never been more evident that the club has found a worthy successor to his illustrious predecessors.

His motivational presence was all over this final, larger than life. Klopp narrated a history of Liverpool that appeared on the big screens at NSC Olimpiyskiy Stadium 45 minutes before kick off. As the montage came to an end, Klopp face filled the screens. ‘We are Liverpool,’ he said, staring into the camera and the fans who had already packed their end and turned it into a sea of red let out a great cheer.

‘Natural enthusiasm,’ Shankly once said. ‘It’s the greatest thing in the whole world. You’re nothing without it. Nothing. Whilst a manager can’t go on to the field with the players, he can convey it to the players. He’s with them and they’re with him and they’ll be successful.’ 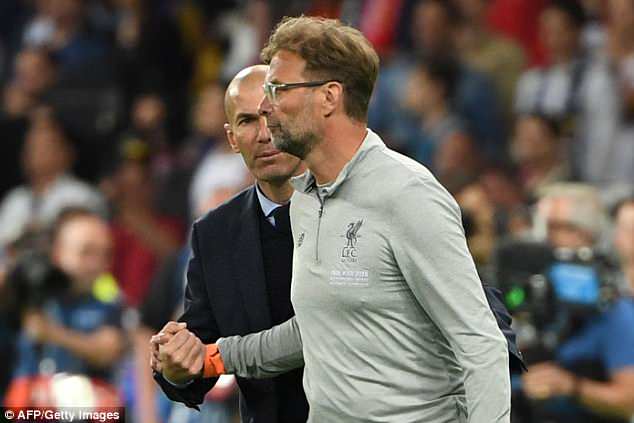 Klopp has that enthusiasm and it helped to sweep Liverpool all the way from their Champions League qualifying play-offs against Hoffenheim in August here to Kiev and the showdown with the mighty Real Madrid. It helped them win matches they should not have won. It helped them overturn the odds again and again.

It was there on Saturday night, too, being transmitted to his players. When Trent Alexander-Arnold cut out a pass meant for Cristiano Ronaldo, Klopp put his hands above his head and applauded ostentatiously. He did it again a couple of minutes later when Alexander-Arnold, the boldest of his picks, forced a fine save out of Navas with a rasping drive.

Sure, his expression changed when poor Mohamed Salah, injured a few minutes earlier by a cynical challenge from Sergio Ramos, lay on the turf after half an hour and put his hands over his face as he realised he could not play on.

It is in situations like that, though, where the force of Klopp’s personality and the relentlessness of his positivity matters so much. Of course Salah’s injury was a huge blow to Liverpool. Everyone knew it might be fatal to their chances. Madrid certainly seemed encouraged by it. But on the touchline, Klopp sent on Adam Lallana, moved Sadio Mane to the right and then began the rebuilding process, encouraging and cajoling. 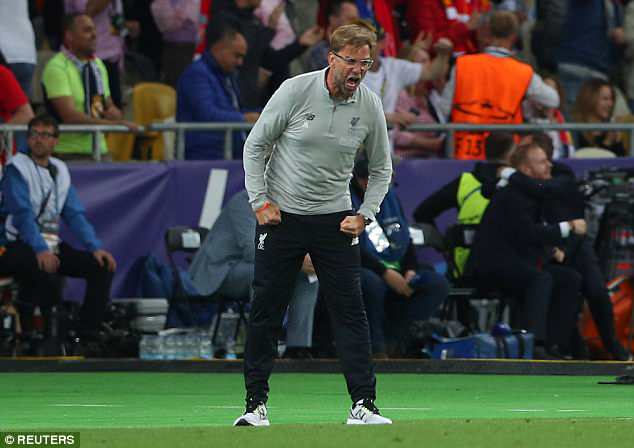 ‘He is the nectar,’ Klopp’s friend, the Huddersfield Town manager David Wagner said last week. ‘He is exactly the human he seems to be and that is why everyone has such a good, warm relationship with him: backroom staff, players, supporters.’

It had been impossible not to think of Shankly’s words on the eve of the game when Klopp gave another tour de force in motivation. He talked about the ‘big balls’ football his players have played. He lionised them and tapped into the history of the club at the same time.

In modern football, people scoff at the idea that enthusiasm and passion still matter. They mock the idea that a roaring, baying Anfield crowd and a rabble-rouser of a manager can affect even brilliant sides like Manchester City. And yet where else and when else did City crumble this season as they crumbled at Anfield in the first leg of their Champions League quarter-final? 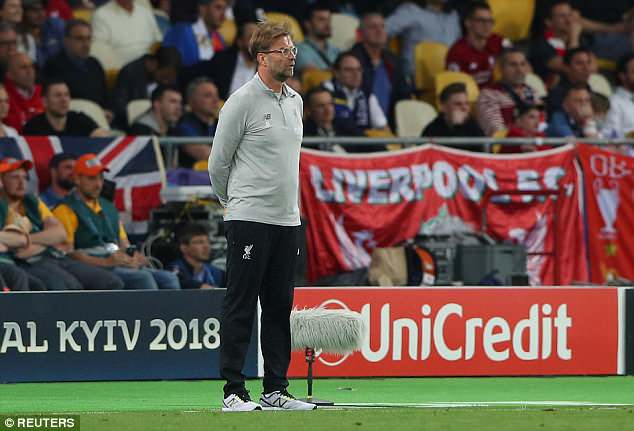 More than the goals of Salah or the beautiful promptings of Roberto Firmino or the grit of Jordan Henderson or the stubborn endurance of James Milner, it was that spirit imbued by Klopp that brought Liverpool here to the Olimpiskiy Stadium.

They were not favourites going into the game. How could they be against a side that made history when it retained the Champions League last season and was bidding to join Ajax, Bayern Munich and the Madrid of the 1950s as the only teams to win the European Cup three times in succession? Being underdogs suits this side, though. It suits Klopp, too.

Liverpool were told time and again before the game that they were the underdogs. The bookies told them and the neutrals told them. Real Madrid captain Ramos said Salah wasn’t even in the same orbit as Cristiano Ronaldo. Klopp reminded everyone that Zinedine Zidane was going for his third Champions League title as a manager while he had none and had lost his last five cup finals of any description.

But they outplayed the champions in the first half, at least until the premature exit of Salah. Klopp’s imprint was there for all to see in the lightning quick transitions from defence to attack, the relentless pressing that discomforted players even of the technical ability of Luka Modric and Toni Kroos, and in the dazzling interplay between Salah, Mane and Firmino.

When Mane equalised ten minutes after half time, Liverpool seemed briefly to be in the ascendancy again as that red mist drifted over the ground. But the brilliance of Bale and the failings of Karius ruined any hopes of a repeat of the great triumphs of Rome, Wembley, Paris and Istanbul. This time, there was to be no miracle. 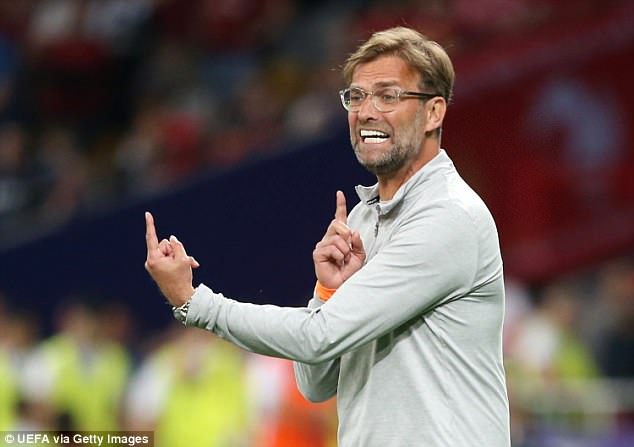