Jury awards over $37M to family of woman slain in standoff

A Maryland jury awarded $37million to the family of a woman who was shot dead by police.

The jury took several hours to reach its decision in a civil lawsuit filed against the Baltimore County government and a white police officer, Cpl. Royce Ruby, who shot Korryn Gaines, The Baltimore Sun reported Friday.

Gaines, who was black, was killed after threatening to kill officers while holding a gun  during a six-hour standoff in her home.

Her five-year-old son was next to her and she streamed the incident live on Instagram.

After the verdict was announced, the family’s attorney stood outside the courtroom and spoke to reporters while wearing a replica Colin Kaepernick jersey.

Kaepernick is the former San Francisco 49ers quarterback who led the ‘take a knee’ protests against police brutality during the national anthem just before NFL games.

The six-women jury found that the first shot, which killed Gaines and wounded her then 5-year-old son, Kodi, was not reasonable and violated their civil rights under state and federal statutes, according to the newspaper.

It said jurors awarded more than $32 million to Kodi in damages, and $4.5 million to his sister Karsyn. 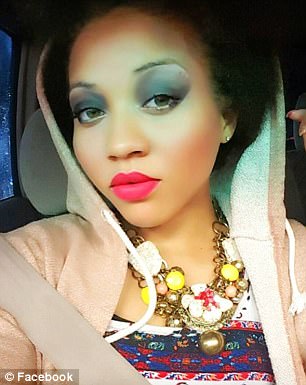 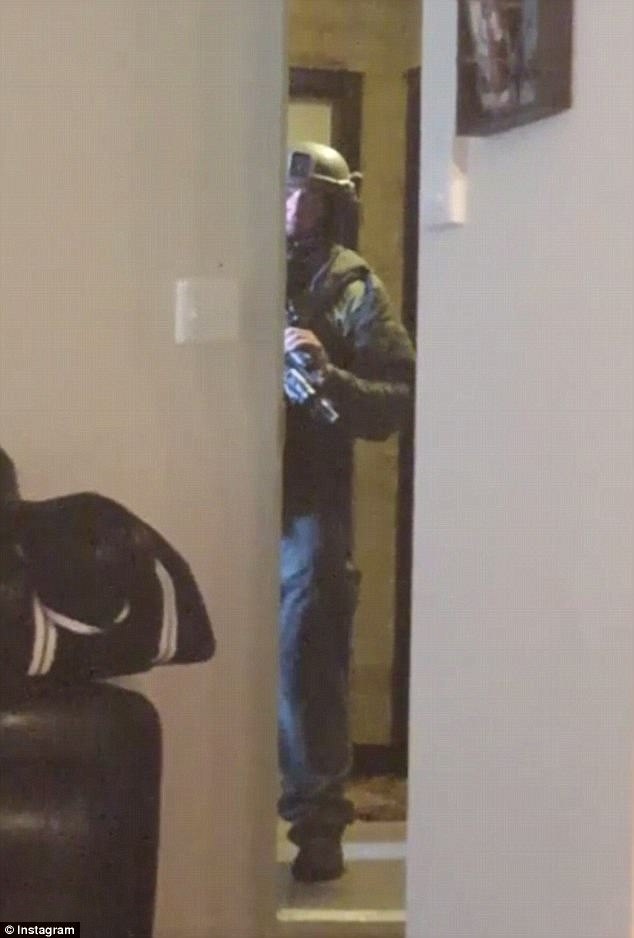 The jury took several hours to reach its decision in a civil lawsuit filed against the Baltimore County government and police Cpl. Royce Ruby (seen above during an Instagram live stream of the six-hour standoff which Gaines filmed just before her death)

The panel awarded about $300,000 apiece to Gaines’ father, mother and to her estate.

Baltimore County government attorney Mike Field issued a statement afterward saying the county was disappointed with the decision and was reviewing all options, including a possible appeal.

Ruby was previously cleared of criminal wrongdoing by the State’s Attorney.

He wasn’t charged and has since been promoted.

Jurors heard nearly three weeks of testimony and arguments about the fatal shooting of August 1, 2016.

Assistant County Attorney James S. Ruckle Jr. argued in closing for the defense Friday that Ruby had acted reasonably and out of fear that other officers could be hurt or killed. 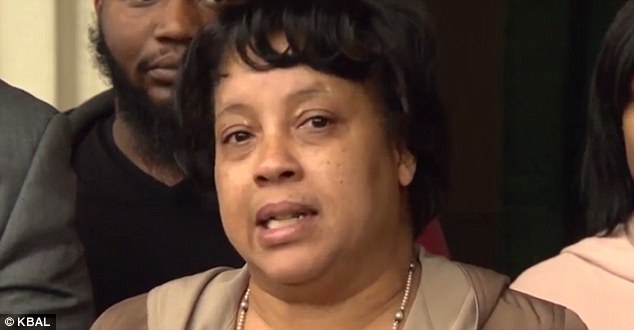 Gaines’ mother, Rhanda Dormeus, spoke to reporters through tears outside the courthouse. ‘This win is for all of my sisters in the movement who have lost their children to police violence,’ she said 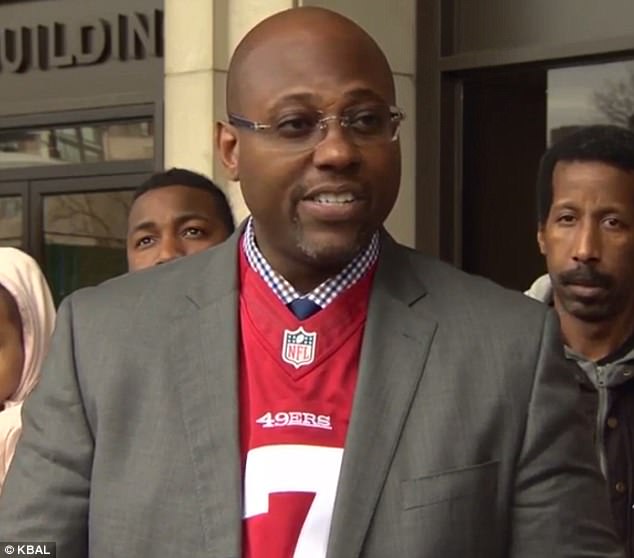 J. Wyndal Gordon, the family attorney, stood outside the courtroom and spoke to reporters while wearing a replica Colin Kaepernick jersey

He told jurors two officers had tried to serve arrest warrants on Gaines and her fiance that day.

Gaines was wanted because she failed to appear in court for traffic charges.

She did not appear in court over charges related to a traffic stop in March 2016, including disorderly conduct and resisting arrest.

Her fiance, Kareem Courtney, was wanted for assault.

When no one would open the apartment door, officers eventually kicked it in, jurors heard.

He said the first officer who entered the apartment was ‘confronted with Korryn Gaines with a shotgun pointed right at him.’

However, Gaines remained with the 5-year-old boy.

When the officer entered the apartment, he saw Gaines sitting on the floor with a long gun pointed at him, according to Baltimore County police.

Police retreated to the hallway, and Gaines’ fiance, Courtney, ran from the apartment with a one-year-old girl, authorities said. 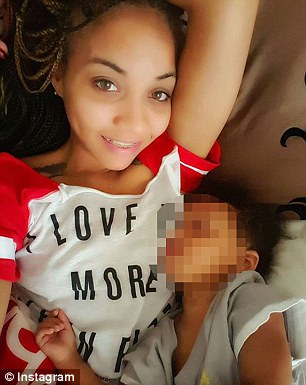 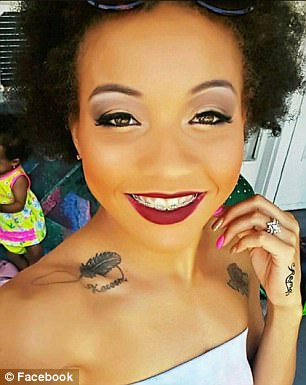 According to investigators, an officer shot her dead on August 1, 2016 after Gaines (above) pointed a gun directly at him and said, ‘If you don’t leave, I’m going to kill you’

Police negotiators tried to talk with Gaines, who they said pointed the gun at tactical officers several times.

On Instagram, the 23-year-old first posted a video with the caption: ‘My son is not a hostage. He wants to be here in his home with his mother.’

In the clip, Gaines asks the boy: ‘What’s happening right now? Who’s outside?’

He tentatively responds: ‘The police?’

When she presses him about what they’re going to do, he answers: ‘They’re trying to kill us.’

After saying he doesn’t want to go outside, Gaines repeatedly asks what he wants to do, saying ‘there’s no wrong answer’.

But the boy doesn’t respond, and the video ends, before Gaines posted another clip showing a policeman standing in her doorway.

According to investigators, an officer shot her dead at around 3pm after Gaines pointed a gun directly at him and said, ‘If you don’t leave, I’m going to kill you.’

Ruckle said Ruby decided to shoot after he saw Gaines’ braids and the barrel of her shotgun rise from behind a wall.

Gaines, who returned two shots, was hit several times and pronounced dead at the scene.

No officers were hurt.

The boy was shot in a limb and taken to the hospital.

‘What Cpl. Ruby was doing was attempting to end, terminate the threat,’ Ruckle said.

Kenneth Ravenell, the attorney for Kodi’s father Corey Cunningham, said the youngster didn’t deserve to be shot and then watch his mother die. 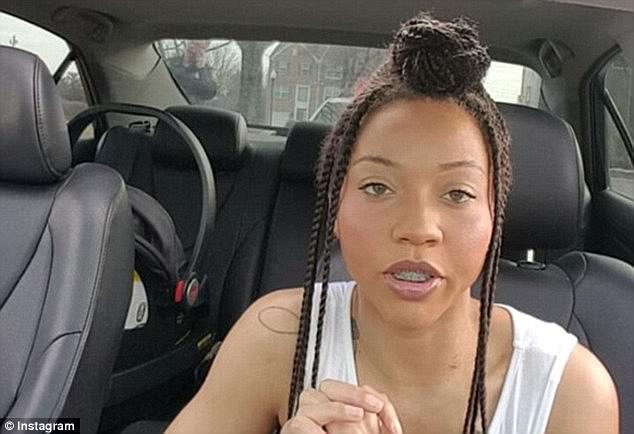 Gaines was wanted because she failed to appear in court for traffic charges. She did not appear in court over charges related to a traffic stop in March 2016, including disorderly conduct and resisting arrest 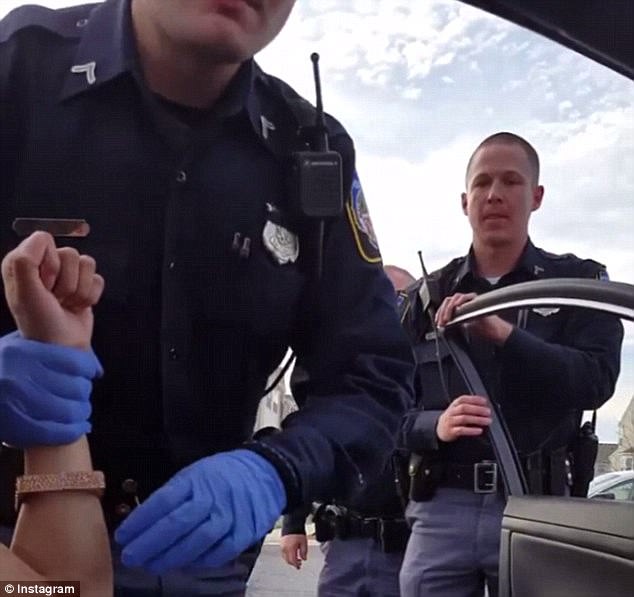 It is unclear what traffic charges Gaines was facing, but she posted a series of videos at the end of March depicting an encounter with the police (pictured)

The case garnered national attention, with some activists citing it as an instance of excessive police force, the newspaper reported.

Gaines’ mother, Rhanda Dormeus, spoke to reporters through tears outside the courthouse.

‘This win is for all of my sisters in the movement who have lost their children to police violence,’ she said.

‘Some of them have never received justice, either criminally or civil. I just want to tell them that this win is for them.’

Gaines’ family and attorneys expressed relief that the jury sided with them and found the shooting was wrong, though some said they were frustrated Ruby remains on the police force.

J. Wyndal Gordon, the family attorney who wore the Kaepernick jersey, said he was ‘filled with pride’ over the verdict.