Days after Jussie Smollett claimed he was a victim of a hate crime, he obsessively Google searched himself more than 50 times to read reports on his alleged attack that police later unraveled as a hoax.

His computer search history shows that he googled ‘Jussie Smollett’ and ‘Juss’ 57 times from January 30 to February 10.

The 37-year-old Empire actor claimed that he was attacked by two men near his Chicago apartment on January 29 around 2am where they launched racial and homophobic slurs at him, poured bleach on him and tied a noose around his neck. 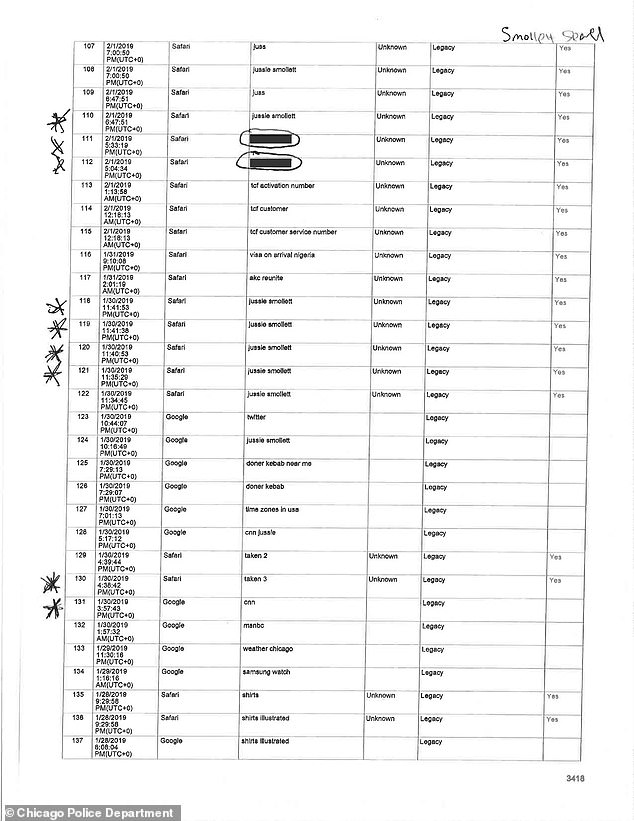 On Monday Chicago police released a trove of documents related to Smollett’s case including computer search records, which show that the Empire actor searched his own name more than 50 times in the days following the January 29 incident. This page shows that on January 30 he searched his own name seven times 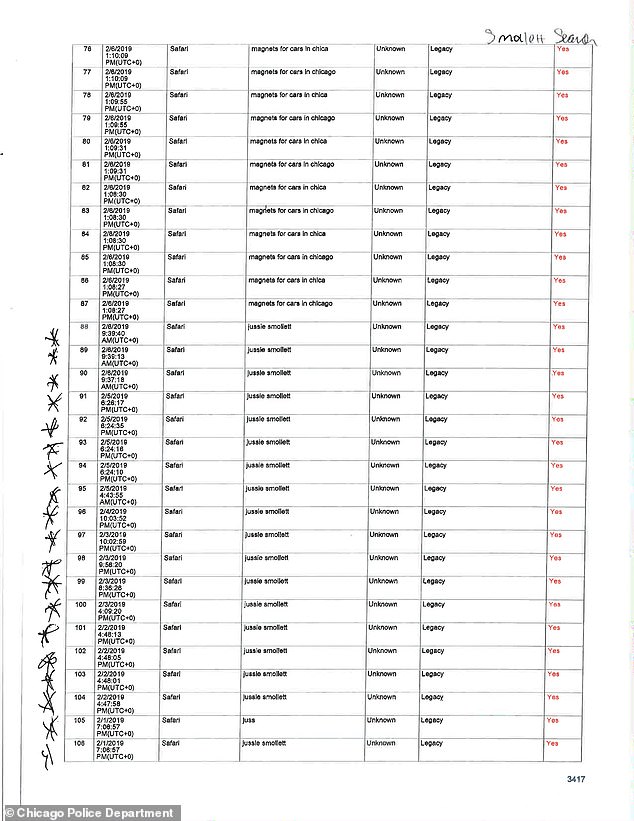 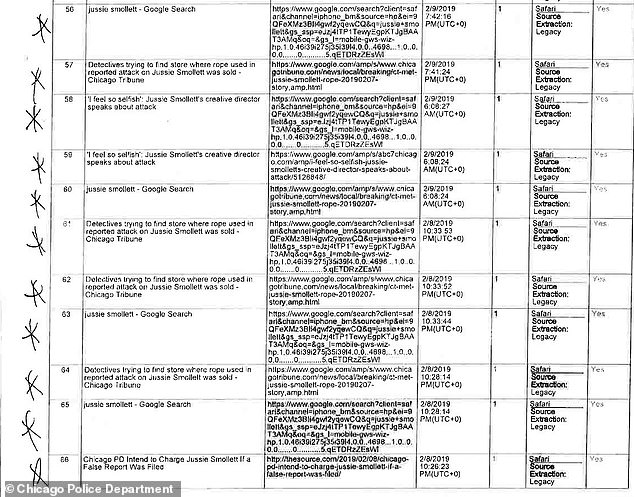 This document shows the types of stories Smollett read, from detectives tracking down the rope that was used to create a noose for the actor and interviews by his creative director 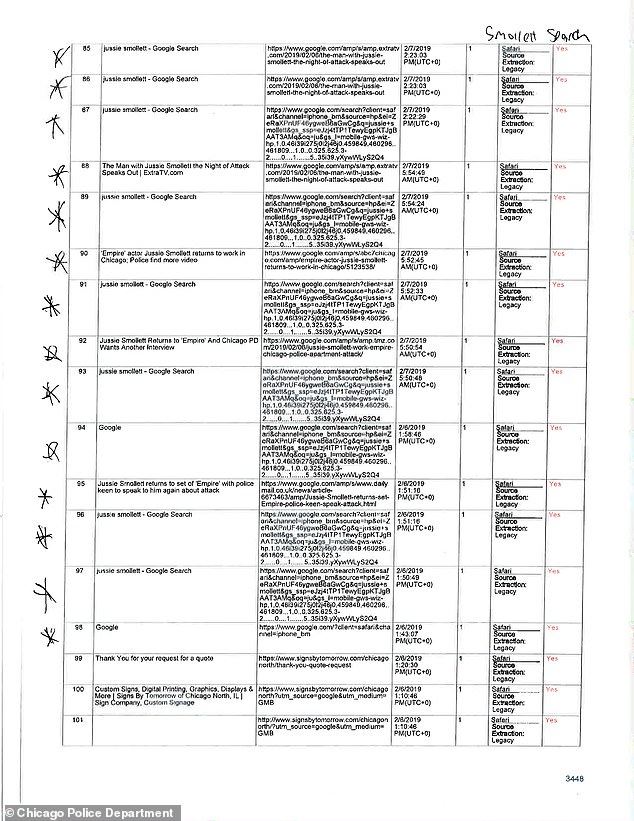 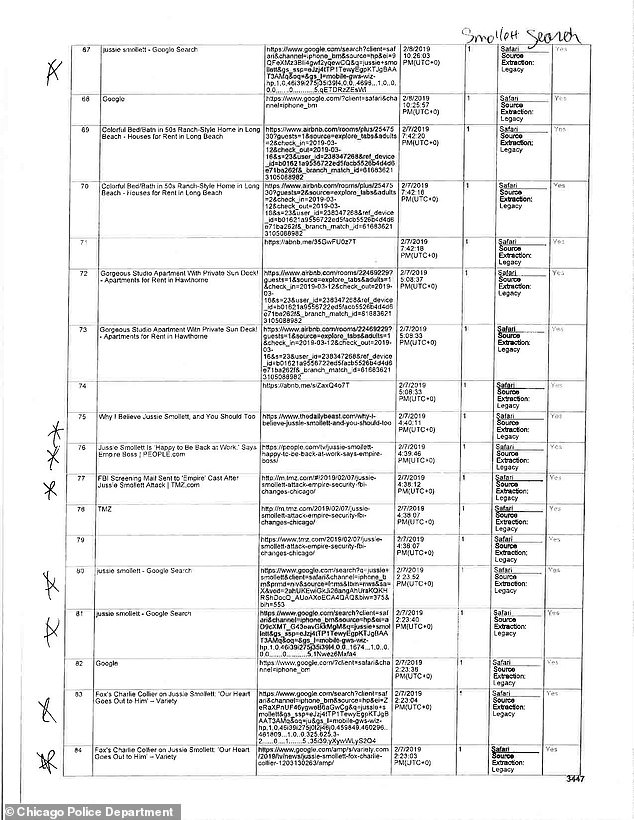 The text searches start on January 30, a day after the attack around 4pm. That day alone he searched himself seven times.

Records show that majority of his computer searches were of himself in the days following the attack, reading stories about his creative director speaking out on the attack and police tracking down where the rope used for the noose was purchased.

Chicago Police determined that he set up the entire attack in an effort to get more attention or money from the Fox show Empire and allegedly paid off his two friends Nigerian brothers Ola and Abel Osundairo $3,500 to carry out the attack.

He was hit with 16 felony charges of disorderly conduct – all which were dropped by Cook County State Attorney Kim Foxx.

On Monday cops released 69 hours of footage related to the case – including video of cops discovering Smollett with a noose around his neck, which he said he kept on to show police as evidence of the attack. 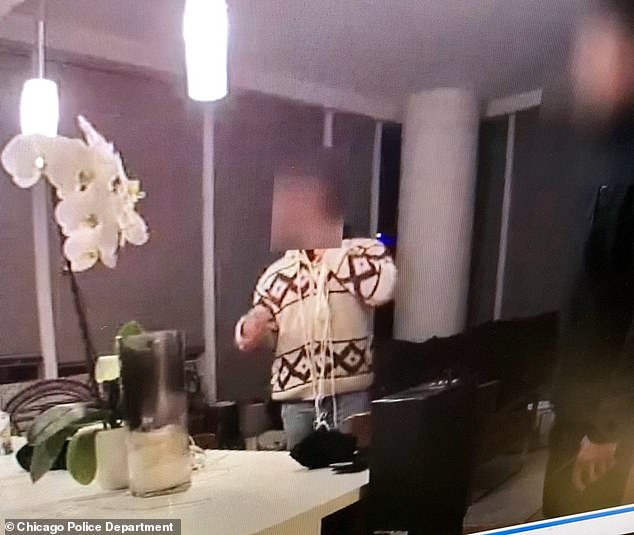 On Monday Chicago Police released 69 hours of video related to Jussie Smollett’s alleged hate crime case including footage of him wearing a noose he claimed his assailants threw on him. Smollett pictured above muzzed wearing the noose 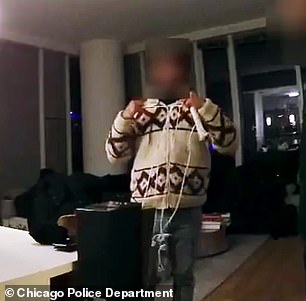 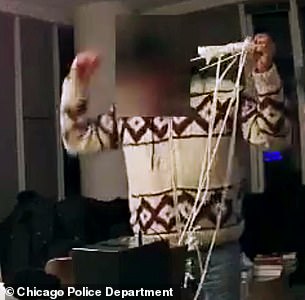 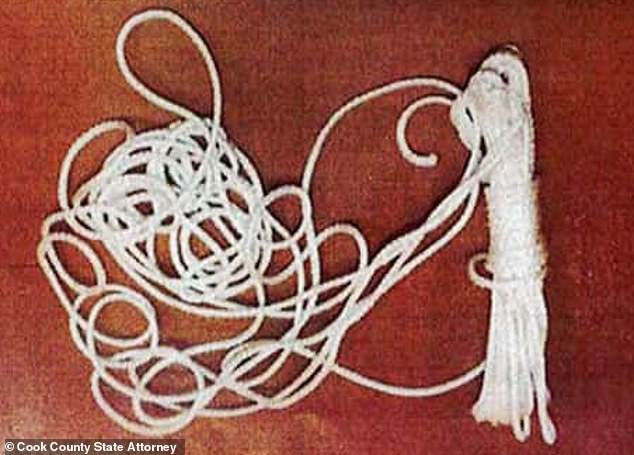 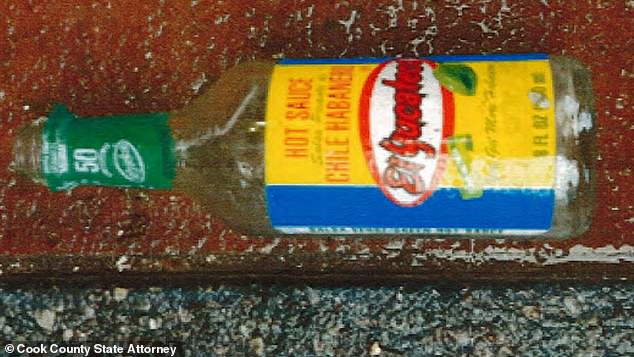 In that shocking video officers are seen entering Smollett’s apartment about 40 minutes after responding to a 911 hate crime call to find the actor standing with a long rope visibly circling his neck. His face is muzzed in the footage.

An officer is heard saying ‘Want to take it off?’ and the actor obliges.

‘Yeah I do. I just wanted you to see. There’s bleach on me. They poured bleach on me,’ Smollett says as he removes the noose.

Smollett and his creative director then ask for the body cameras to be turned off.

Other videos in the massive release include footage of the Osundairo brothers in a taxi on their way to meet Smollett on the night of the attack wearing hooded jackets and a ski mask at 1.22am and the brothers being arrested at O’Hare International Airport on February 13. 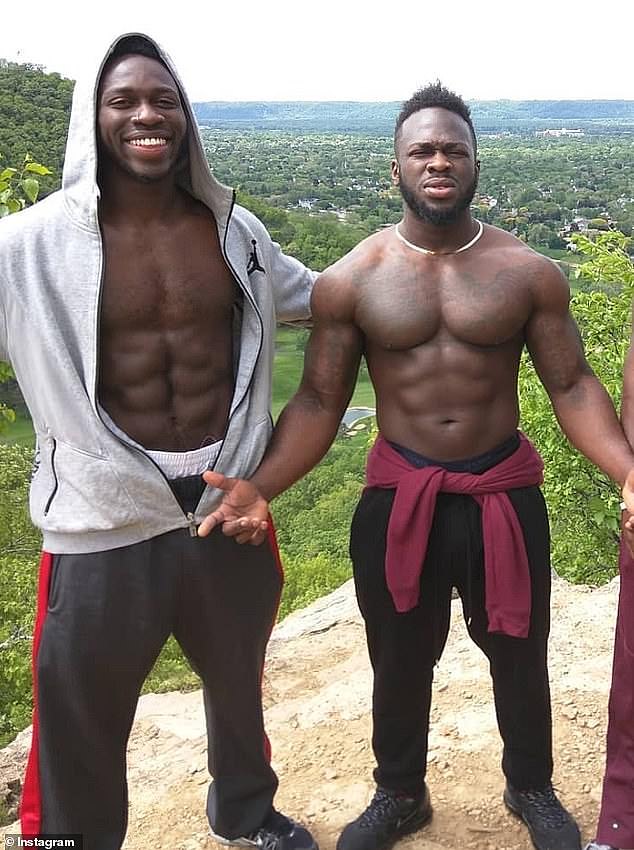 Police say that Smollett staged the entire attack, paying his friends Nigerian brothers Abel and Ola Osundairo (above) to attack him in the street in a twisted plot to gain more recognition or money from his Fox show Empire

In a text sent on January 29 at 5pm – the day of the attack – Abel texted Smollett saying: ‘Bruh say it ain’t true. I’m praying for speedy recovery. Sh*t is wild’

According to the text message transcripts one of the brothers under the name King AmiBola – presumably Abimbola ‘Abel’ Osundairo – texted Smollett the day of the attack around 5pm saying, ‘Bruh say it ain’t true. I’m praying for speedy recovery. Sh*t is wild.’

The release of the tapes comes days after a judge decided to appoint a special prosecutor to look into the Cook County prosecutor Kim Foxx work in the case.

In addition to a new special prosecutor’s investigation, law enforcement said that the FBI would be investigating the case as well back in March.

The city of Chicago is still after Smollett, trying get him to pay the $130,000 the investigation cost in overtime.

The disclosure of the documents related to Smollett’s case comes days after a Cook County Judge orderd they be ‘unsealed’.

In March Cook County prosecutor Kim Foxx dropped all charges and Smollett was let free after a $10,000 bail payment and 16 hours of community service.

Judge Michael Toomin decided on Friday June 21 that a special prosecutor will be appointed to look into prosecutor Kim Foxx’s handling of the case and if necessary charges may be brought against the Empire actor again.

Kim Foxx has been accused of misconduct as it has emerged that she exchanged text messages with members of his family and representatives for them in the early stages of the investigation.

Since Foxx dropped the charges, there have been multiple efforts to have the case looked over.

In his 21-page decision on Friday, Judge Toomin said: ‘If reasonable grounds exist to further prosecute Smollett, in the interest of justice the special prosecutor may take such action.

‘The unprecedented irregularities identified in this case warrants the appointment of independent counsel to restore the public’s confidence in the integrity of our criminal justice system.

‘There was no master on the bridge to guide the ship as it floundered through unchartered waters.

If reasonable grounds exist to further prosecute Smollett, in the interest of justice the special prosecutor may take such action

‘And it ultimately lost its bearings,’ he said.

Foxx, who maintains she did nothing wrong, ‘recused’ herself from the case in February but instead of completely stepping back, she gave it to her immediate assistant and then coached him on what to do.

In a statement, she hit out against the decision on Friday afternoon.

‘I respectfully disagree with the court’s conclusion that, in the absence of any conflict, the appointment of a special prosecutor is required.

‘As always, I remain committed to transparency, justice, and the public safety of the communities we serve,’ she said.

In his ruling, Toomin said he had no problem with Foxx’s recusal, but that she had no right to select someone from her office to handle the prosecution, saying what she did amounted to naming her own special prosecutor.