Just HOW bad are ambulances faring? Graphs show response times in YOUR area…

Ambulances take three times longer than they should to reach heart attack patients in parts of the country, official data shows.

999 crews are supposed to attend category two calls — which also include strokes — within 18 minutes, on average.

But the average response time in the East of England stands at 1hour, 2minutes and 47 seconds. 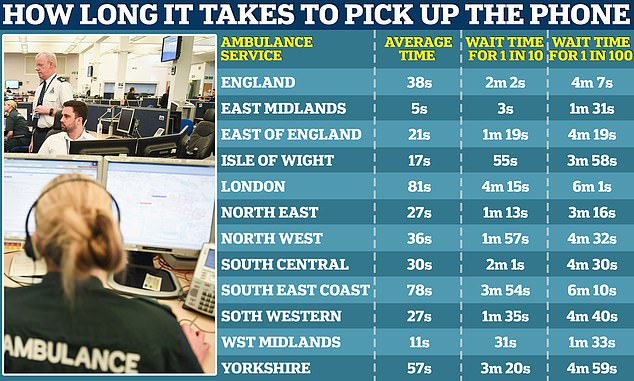 Thousands of paramedics, drivers and call handlers in England and Wales walked out today in the biggest industrial action of its kind since the 1980s.

It has led to fears patients may have to make their own way to hospitals, even if they are suffering serious health problems.

Only the most serious calls — category ones — are fully exempt from today’s strikes. This includes cardiac arrests.

Yesterday, health minister Will Quince urged Britons not to ring 999 unless they are sure their condition is ‘life-threatening’. He said people should avoid doing anything ‘risky’ such as contact sports.

The Isle of Wight had the quickest response times (28 minutes 16 seconds).

Meanwhile, the national average for category one stood at 9 minutes 26 seconds.

The NHS target is 7 minutes, on average.

Feryal Clark, Labour’s shadow minister for primary care and patient safety, said: ‘Patients can no longer trust that an ambulance will reach them or even that their 999 call will be answered in an emergency, when every second counts.

‘This is the terrifying reality after 12 years of Conservative understaffing of our NHS.

‘The Conservatives tried to blame the pandemic and now they are trying to blame NHS staff.

‘It’s their failure and they should face up to it.

Liberal Democrat health spokesperson Daisy Cooper MP said the ‘heart-breaking’ figures show that even prior to strikes, people were waiting far too long for an ambulance.

She added: ‘Our ambulance services are being stretched to breaking point by years of neglect by this Conservative government.

‘The refusal of the Health Secretary (Steve Barclay) to even sit down and negotiate properly with paramedics and ambulance service workers is unconscionable. 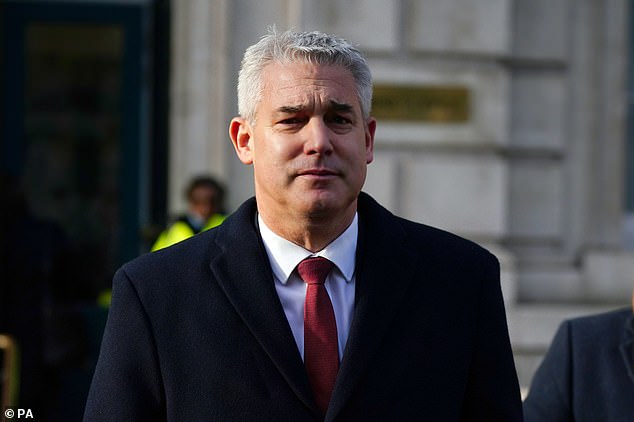 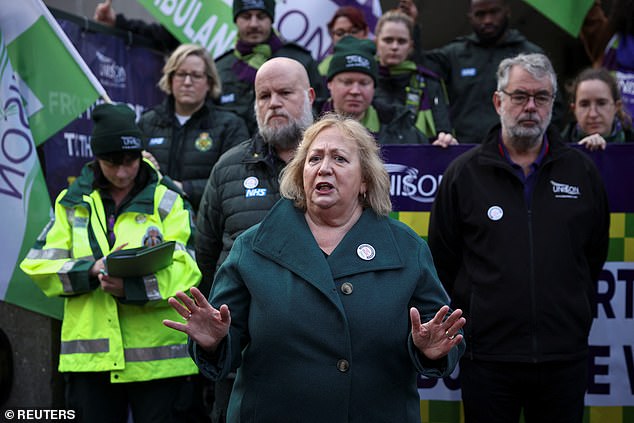 However, speaking to GMB, Unison boss Christina McAnea (pictured at a picket line today) claimed this was ‘completely and utterly untrue’ and said it was ‘shocking that he’s attacking workers like this’

‘This is not just about pay, it’s about this government’s failure to address staff shortages, fix the social care crisis and end the shortage of hospital beds.’

Mr Barclay met ambulance unions yesterday in a last ditch effort to avoid further chaos but failed, after discussions around pay were kept off the table.

He is facing calls to resign unless he gets a grip on the crisis.

Mr Barclay accused trade unions of being ‘unwilling to give exemptions to cover all life-threatening and emergency calls’ after they met yesterday.

He also wrote in The Telegraph that ambulance trusts had made it ‘impossible’ to make contingency plans to ensure patient safety.

When asked to confirm which trust had made it difficult, he told LBC he thought all trusts were to blame as they ‘refused’ to give national exemptions regarding life-threatening calls.

He added: ‘They were not willing at the national level to give that assurance, which has made contingency planning much more difficult.’ 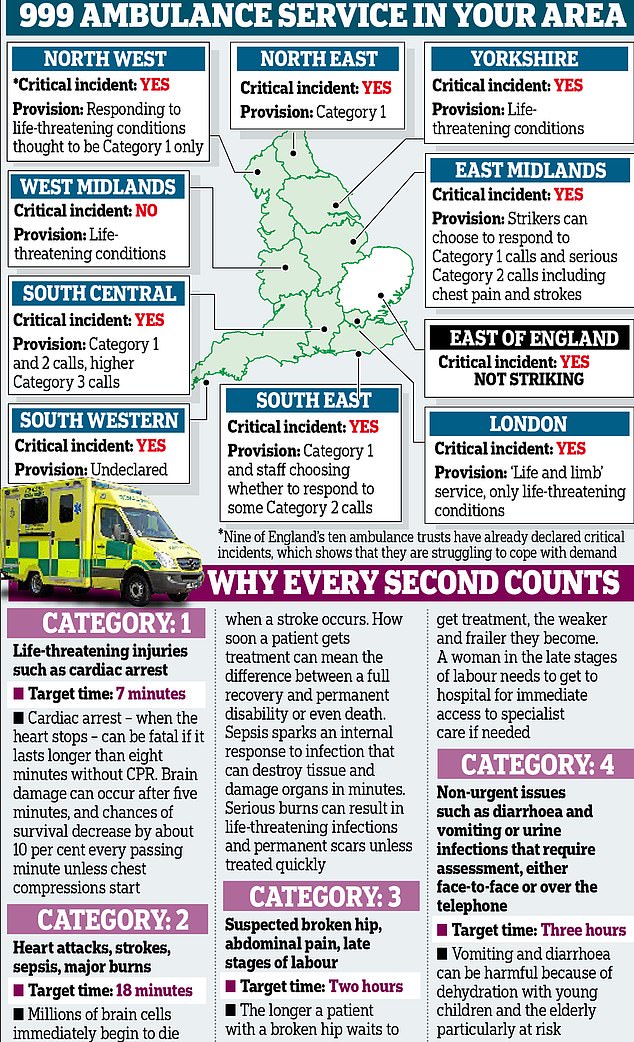 However, speaking on Good Morning Britain, Unison boss Christina McAnea claimed this was ‘completely and utterly untrue’ and said it was ‘shocking that he’s attacking workers like this’.

Ms McAnea said the health secretary ‘said none of this to me’ regarding contingency plans during yesterday’s talks.

She added: ‘I think he’s trying to hide behind the fact that he waited until yesterday to speak to the trade unions about contingency planning.

‘But the reality is we’ve been working on the ground with individual ambulance trusts to reach agreements on contingency planning. It has taken weeks to do it, hours of work every single day by some of our Unison activists.’

The unions are understood to have all agreed to cover category one calls on a local basis. The majority also vowed to attend cat twos.

Unions have urged the Government to make an offer on pay, suggesting an agreement could be reached.

But Mr Barclay has insisted the union pay demands are ‘unaffordable during these challenging times’.

What MailOnline readers really think about ambulance strikes… so do YOU agree with the 20 best-rated comments?

Don’t do anything ‘risky’ tomorrow! Health minister makes plea as up to 10,000 nurses strike today on eve of biggest ambulance crew walk-out in 30 years that experts fear will put lives at risk