Just the place for a blow-out: A reliably fine meal at the never-changing French Horn in Berkshire

Some things never change. The eternal allure of Desert Island Discs. Rod Stewart’s barnet. And The French Horn in Sonning-on-Thames, a restaurant where it is forever 1987. There’s the ebullient, black-suited maître d’, a throwback to the good old days, when Italians ruled the front of house while the French got on with the serious business of shaking pans out back; the butter in iced silver dishes; the cheese straws that sit on every table, and a white bowl of excellent Melba toast. 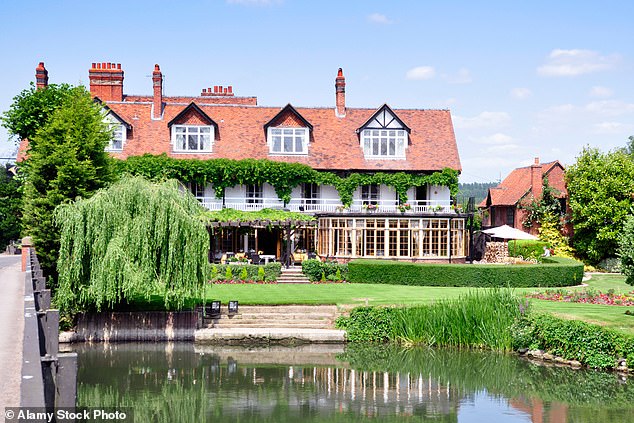 Apparently, The French Horn has been owned by the Emmanuel family since 1972, and I get the feeling some of the regulars have been here just as long

Outside, at the end of an immaculate lawn, the Thames doesn’t so much meander as rage, angry brown torrents rushing under a chorus of weeping willows. But it’s the only sign of discord in this plush, well-upholstered oasis of old-school charm. Our fellow guests all wear blazers or smart frocks, and chatter merrily with the lovely staff, having a gay old time.

Apparently, The French Horn has been owned by the Emmanuel family since 1972, and I get the feeling some of the regulars have been here just as long. ‘Even Mary Berry would find this a little fuddy-duddy,’ whispers Bill, as we eschew a pre-lunch sherry and tramp straight to our table.

I’m clad in sweatshirt and trainers, having not realised this place was, well, this sort of place. But after a barely perceptible raise of the eyebrows, upon arrival, plus a few mildly appalled glances from the other tables, we’re left to get on with lunch.

And what a menu this is. Preserved, like The French Horn, in tomato aspic. Sure, there are a few modern-ish, Nouvelle Cuisine-ish flourishes (a Sichuan pepper and lemon balm sauce with the scallops; lobster poached in lemongrass broth). But how lovely to see (if not eat) Charentais melon with chilled white port, Dover sole four ways (including Caprice, with a banana!), lobster thermidor and spit roast duck. We start with ‘Dublin Bay prawns, breaded, deep-fried and served with a thick tartare sauce’. Better known as scampi. Although no sign of a basket here, rather, plump crustaceans, immaculately fried, wearing the most skimpy and silken of batters.

It’s what every pub whippersnapper aspires to be when it grows up, the very pinnacle of the scampi art. There’s an immaculate foie gras terrine too, as rich as Croesus, with a sigh of chilli at the end and a gloop of dainty mandarin mousse. The only mis-step, a drizzle of oversweet, cloying mandarin sauce.

Crab salad is decent, if fridge-cold, and lacking the ethereal sweetness of the just-picked. Like everything else here, the portion is generous, although at £22, so it should be. A sliver of shell is an unwelcome guest.

Bill has a vast veal chop, lasciviously juicy and cooked pink, while my spit roast duck is, to quote Michael Winner, who was a big fan of The Horn, ‘historic’. Carved tableside, with crisp, lavishly salted skin and sweet, succulent, flame-licked flesh, it is magnificent. There’s a splodge of sharp apple sauce and a dusty pile of home-made stuffing (I love dusty Paxo-style stuffing) and lashings of thin, intense gravy. ‘There are no short cuts in this kitchen,’ says Bill admiringly, so ‘chapeau’ to Josiane Diaga and her team. They sure know how to cook. 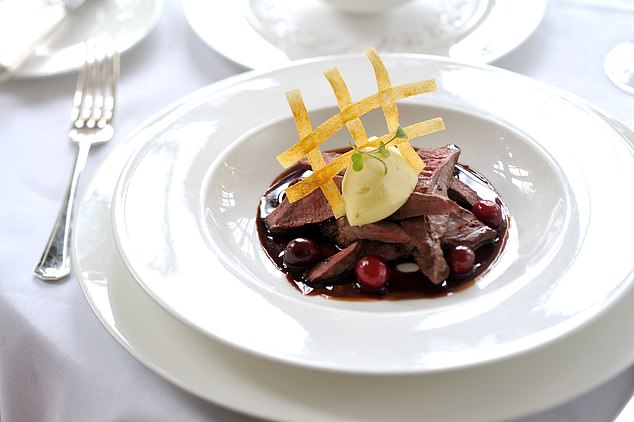 Lamb with cranberry sauce. ‘There are no short cuts in this kitchen,’ says Bill admiringly

Prices are Berkshire-posh-hotel high, yet the sides (a fine leek gratin, buttered spinach, a peerless gratin dauphinois) come in at £3.50. Plus there’s a three-course set menu for £33, which offers astounding value.

For pudding, crêpes suzette, flambéed at the table. Obviously. I don’t really like these boozy, oversweet pancakes but I adore the drama, all dancing flames and well-honed flips.

Coffee comes with pretty petits fours. Of course it does.

Outside, the river rages on, but here, just past three, all is calm. Just as it has been for the past 46 years. And just as it will be, I hope, for the next 50.

A very merry spring lunch at Fortnum & Mason. Asparagus, the first of the season, and lots of it. And lamb too.

Back to Fortnum’s, but lunch with Ewan and Edge at 45 Jermyn Street. More asparagus, dipped in hollandaise, followed by a magnificent Peter Hannan steak.

Down to Devon, to my friend William’s wedding. Fillet steak for 100 people, cooked by the great Henry Harris. I overindulge rather.

And don’t feel too pretty today. I scoff down a cheese toastie on the train to London. Then meet my wife and children for xiao long bao buns, prawn har gau, roast venison puffs and XO tobiko rice at Shikumen in Shepherd’s Bush.