U.S. Justice Department officials and some state attorneys general are set to meet on Friday to discuss next steps in a potential anti-trust case against Google.

According to the Wall Street Journal, federal and state officials will meet virtually to discuss the likely case and to assess whether the states wish to bring their own lawsuit against the internet giant or join one filed by the Department of Justice.

They will also discuss the scope of any legal complaint.

The federal government and nearly all state attorneys general have opened investigations into allegations that Google has broken antitrust laws.

The Justice Department and several state regulators have been gearing up to file antitrust lawsuits alleging Google has abused its dominance of online search and advertising to stifle competition and boost its profits.

Senator Josh Hawley, who wrote a letter to the Justice Department in March calling for a probe into Google’s dominance in search, said Tuesday that ‘evidence of anticompetitive conduct in search technology is striking’.

‘I’m optimistic DOJ will do its due diligence and follow the facts,’ he added.

Other lawmakers have called for the investigation to be widened to include Google’s alleged viewpoint bias. 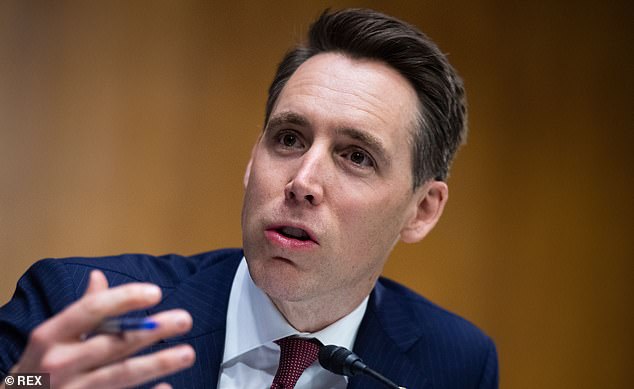 ‘Both the American free market and the openness of our democracy are presently at stake,’ Sen. Marsha Blackburn said in a letter to Attorney General Bill Barr on Monday.

‘As the Department decides which actions to pursue, I urge mounting a full investigation that examines the company’s control over vast sectors of the Internet economy, from online advertising to online search.’

Barr appeared open to the idea in a Fox News interview over the weekend.

‘They [tech companies] are only presenting one viewpoint and they can push the public in a particular direction very quickly,’ he said.

‘One way this can be addressed is through the antitrust laws and challenging companies that engage in monopolistic practices.’

The Justice Department may file its case as early as this summer while Texas Attorney General Ken Paxton may take action in the fall, along with his peers in other states, according to the Journal.

AG Barr has previously said he hoped to decide whether to pursue an antitrust case against Google by the summer.

Texas and other states announced they were looking into Google’s business practices in September 2019. 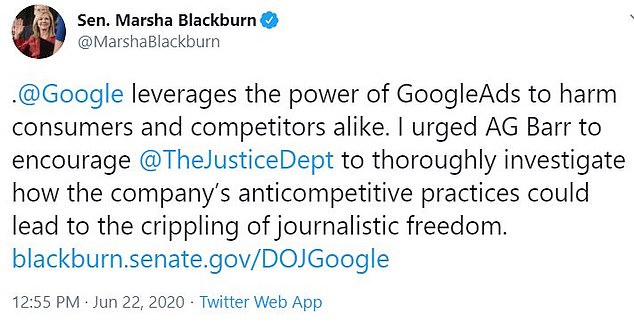 In a letter to U.S. AG Bill Barr on Monday, Sen. Marsha Blackburn called for the investigation to include whether conservative viewpoints are being attacked by the tech company 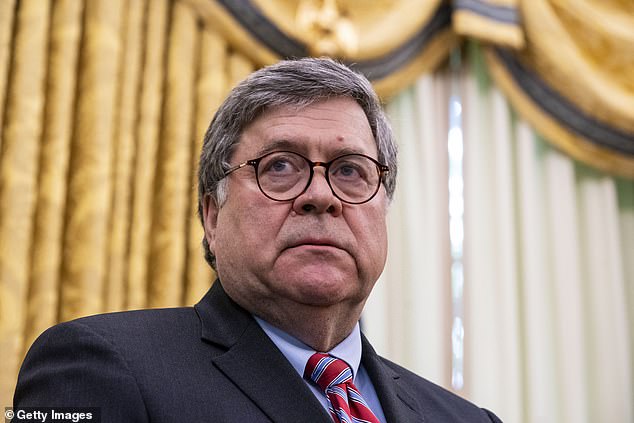 U.S. Attorney General Bill Barr, pictured, has previously said he hopes to decide whether to pursue an antitrust case against Google by the summer

It is not known how many states will be involved in Friday’s talks or if they are all in agreement about how to proceed.

Google acknowledged it has ongoing discussions with the Justice Department and Paxton without elaborating on the nature of the talks.

‘Our focus is firmly on creating free products that help Americans every day and lower costs for small businesses.’

This isn’t the first time Google has been thrust under the microscope of antitrust in the U.S.

The Federal Trade Commission closed an extensive investigation into Google’s alleged abuses in 2013 without taking any action because it concluded the Mountain View, California, company wasn’t hurting consumers

Since then, Google has grown even more powerful under the umbrella of the corporate parent, Alphabet, that it spawned in five years ago.

When the FTC closed its case, Google was generating annual revenue of $50billion.

Most of the money comes from a digital ad market that Google dominates along with social networking rival Facebook – another potential target of antitrust regulators.

Google is the bigger of the two online ad giants, thanks mostly to a search engine that has become synonymous with looking things up.

The company also owns the leading web browser in Chrome, the world’s largest mobile operating system in Android, the top video site in YouTube and the most popular digital mapping system.

Google consistently maintains that its services face ample competition from rivals, and have unleashed innovations that help people manage their lives.

Most of the services are offered for free in exchange for personal information that helps Google sell its ads.

Antitrust regulators in Europe have attempted to crack down on Google by imposing multi-billion dollar fines and ordering changes to its practices.

But the company’s critics say those penalties haven’t been severe enough and contend more extreme measures will be required to for Google to change its ways.

Those might include a government attempt to force Google to spin off its various services into separate businesses, an effort the company would be likely to fiercely oppose.