He has reportedly rented a $13,000 a night villa at the Belmond Hotel Caruso in Ravello to enjoy with the love of his life.

And Justin Bieber and fiancée Hailey Baldwin continued to flaunt their chemistry as they shared a steamy kiss while enjoying some time aboard a luxury yacht on the Amalfi Coast on Friday. 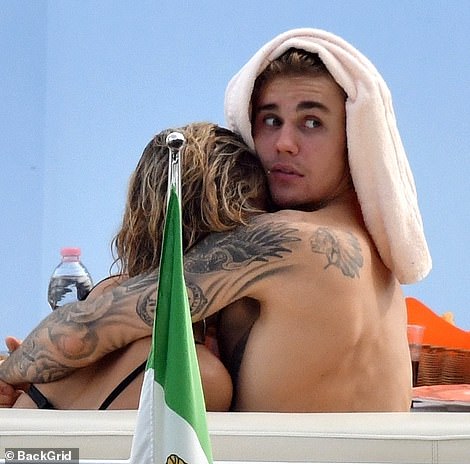 Love is in the air: Justin Bieber and fiancée Hailey Baldwin continued to flaunt their chemistry as they shared a steamy kiss while enjoying some time aboard a luxury yacht on the Amalfi Coast on Friday

It’s likely the two are doing wedding planning while on their getaway. The couple obtained their marriage license one week ago in New York City, meaning they have only 53 days before the license expires.

A local reporter from Il Vescovado told the site that they are in the small town of Ravello, which is on the Amalfi coast.

The villa comes with a private butler and chef as well as a private garden and stunning views of the Italian coast, the site added.

‘Yesterday, he spent €8000 ($9,500) on a bottle of Petrus wine. He also loves pasta alla bolognese and loves the privacy of Ravello,’ the reporter claimed.

TMZ report the singer’s team have counselled him into getting paperwork drawn up to protect his reported $250m fortune, with Hailey thought to be worth around $2m.

The report claims the prenup is about to be signed, and the couple will not marry until all the paperwork is in order.

Despite both Justin and Hailey taking their vows seriously, thanks to their religious views, it’s thought they have both agreed a prenup would be sensible.

Despite technically making it legal, the IMG Model insisted she was ‘not married yet’ via Twitter on September 14.

According to TMZ, the Hillsong Church duo now have 53 days to make their nuptials official in New York state, and then they’ll move into the $5M four-bedroom Ontario mansion mansion he bought.

Justin and the Drop the Mic co-host – who got engaged on July 7 – previously dated off/on in 2015-2016, but they’ve been inseparable ever since June.

Eyebrows raised at the millennial duo (who first met in 2009) considering Bieber only split from his on/off girlfriend since 2010, pop diva Selena Gomez, six months ago.