Looking to get attention to promote his own brand of streetwear, Justin Bieber dressed up in a fluffy teddy bear mascot costume on Saturday.

The line, called Drew House – a reference to his middle name Drew – has been in the works for a few years and has an oversized, skater-influenced style.

The pop superstar took advantage of some free time and went on a promotional meet and greet with fans dressed outside his new storefront location.

His brand: Justin Bieber posted photos of himself dressed up in a fluffy teddy bear Mascot costume to promote his label, Drew House on Saturday

The Yummy star appeared to be in good spirits as he made his way around greeting fans dressed as the bear to promote his latest collection. He posted photos of the moment to his Instagram account on Friday.

Later in the day, while enjoying a bowl of Ramen, Bieber wore a yellow beanie cap and a matching puffy yellow jacket and pulled the the hood over his head.

‘Drew house is a community,’ according to the brand, ‘a place where you can be yourself and loved, encouraged, safe, and valued.’ 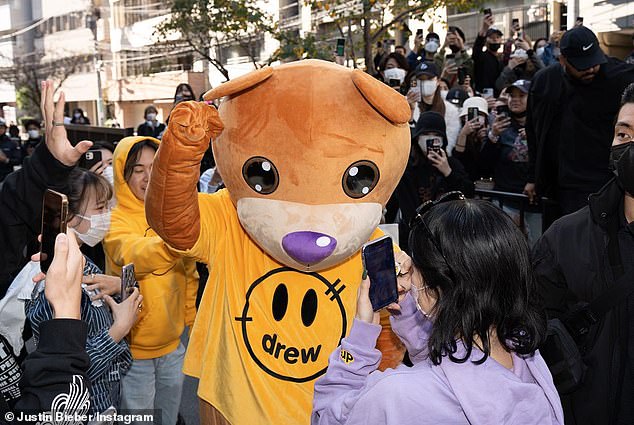 Meet and greet: The pop superstar went on a promotional meet and greet with fans dressed in the mascot costume outside his new storefront location

Sharing snaps: The icon shared polaroid images of himself as his own best brand advert 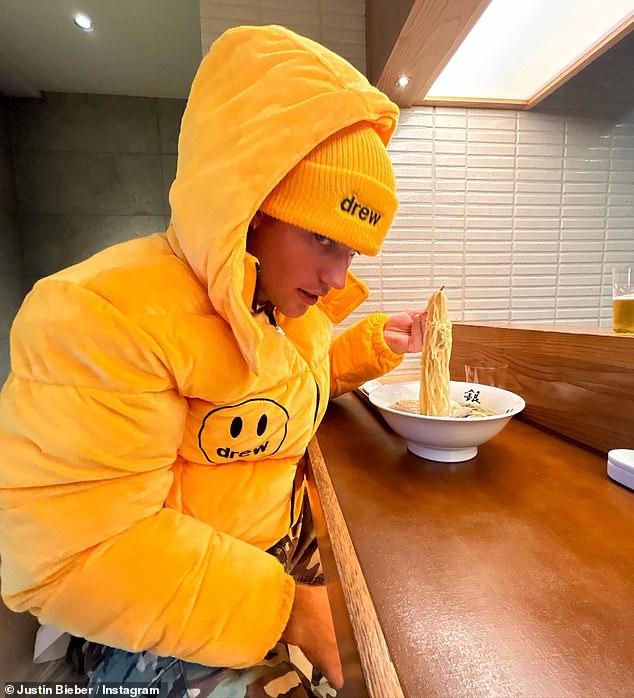 Sans costume: Later in the day, while enjoying a bowl of Ramen, Bieber wore a yellow beanie cap and a matching puffy yellow jacket

The brand’s early pieces were hotel-style slippers and hoodies (both with the smiley face logo) which are still among the hottest pieces today.

The afternoon outing comes days after Bieber got some disappointing financial news in recent days, as a Bored Ape NFT that he spent over a million dollars on is now worth just pennies on the dollar.

According to Insider, the nondescript non-fungible token is worth just $70,000 following the crash and Chapter 11 bankruptcy filing of the cryptocurrency exchange FTX. 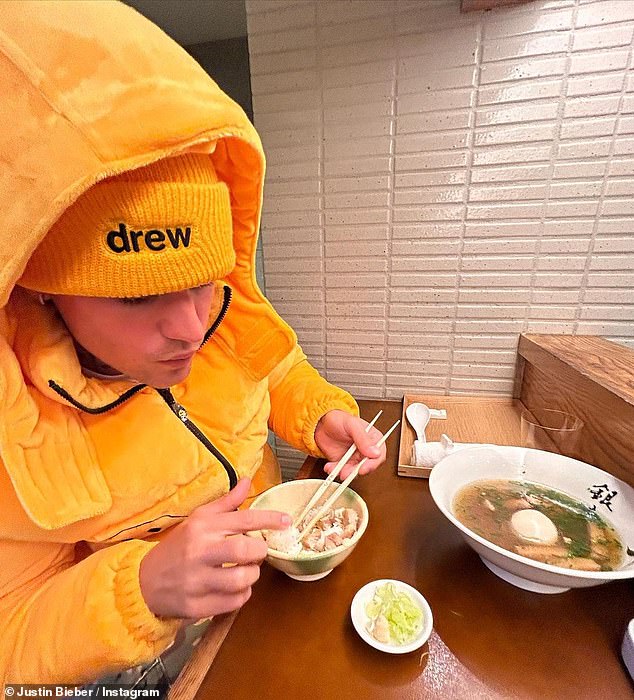 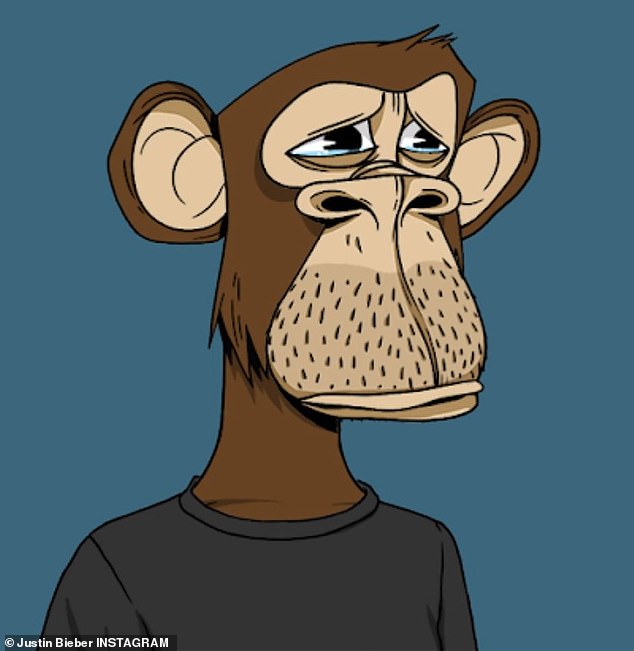 Collateral damage: The value of Bieber’s Bored Ape (pictured) has dropped 95 percent following the crash of the cryptocurrency exchange FTX earlier this month

Justin bought the NFT back in January for a stunning $1.3 million, meaning it has plunged in value by 95 percent.

The massive drop in value of Bieber’s NFT appears to be related to the collapse of FTX, which sent cryptocurrency values plummeting.

Many NFT owners also reportedly panic-sold them in hopes of recouping as much of their purchase price as possible while prices continued to slide. 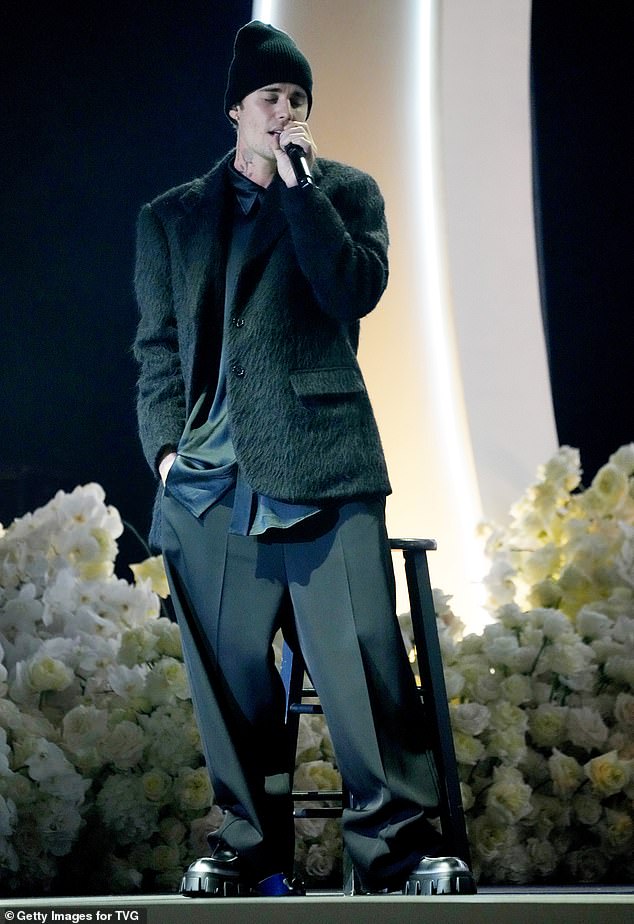 Moving tribute: Justin performed an acoustic version of his song, Ghost, as he sang on stage as he paid tribute to the late rapper, Takeoff, in Atlanta last week

At the ceremony, Justin gave a moving, acoustic performance of his song, Ghost, on the stage as guests mourned the tragic loss.

Takeoff, Quavo and Offset were notably part of the hip-hop trio called Migos.

Justin had worked together with Migos on past tracks, including the song What You See (2021), and Looking For You (2014).

The rapper, whose real name is Kirsnick Khari Ball, tragically passed away after being shot outside of a bowling alley in Houston on November 1. 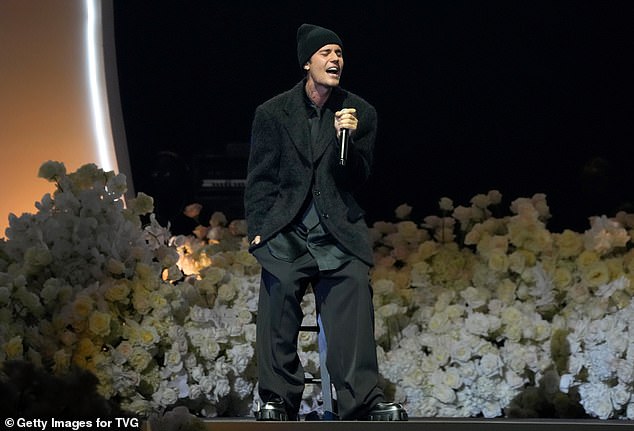 Emotional performance: The singer had collaborated with Migos in the past, including the 2021 track called, What You See