This famous couple recently returned to Los Angeles after spending weeks isolating in Canada amid the coronavirus pandemic.

But Justin and Hailey Bieber seemed to be adjusting back to life as they were seen out separately on Thursday.

They both showed off their individual styles, as the 26-year-old popstar went for a comfortable grey ensemble and Hailey donned a business casual chic look in all white.

Different styles: Justin and Hailey Bieber were spotted out separately in Los Angeles on Thursday, after returning from isolation in Canada

The Yummy singer went for comfort in a fuzzy grey sweatshirt and grey sweat shorts from the Fear of God brand.

He teamed it with New Balance sneakers that featured bright blue and pink patterns with a pink emblem.

His baseball cap was in a similar neon blue color, as he wore the hat backwards and covered most of his famous face in a disposable mask.

Meanwhile, heading out of a business meeting 23-year-old Hailey was looking fabulous in shades of white. 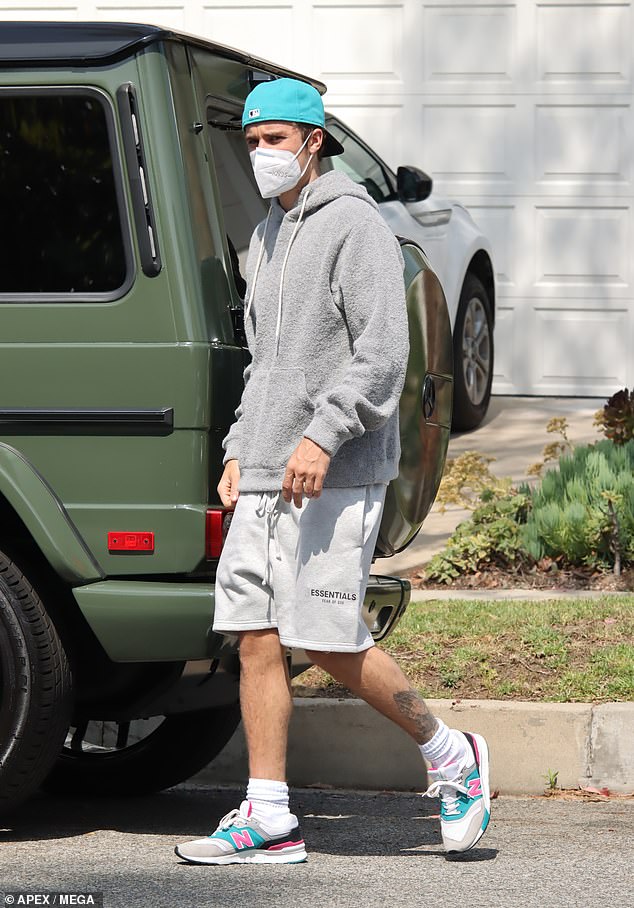 Grey mood: The Yummy singer went for comfort in a fuzzy grey sweatshirt and grey sweat shorts from the Fear of God brand

The model wore white high-waist denim jeans with rolled cuffs to highlight her shoes, which were low-heel strappy white sandals.

Teaming the look with a cream colored button up she looked every inch the modern businesswoman.

Hailey opted for a small black shoulder bag, hanging on her shoulder, and gold hoop earrings.

Her blonde locks were pulled back into a sleek bun, parted in the middle, revealing some of her brown roots. 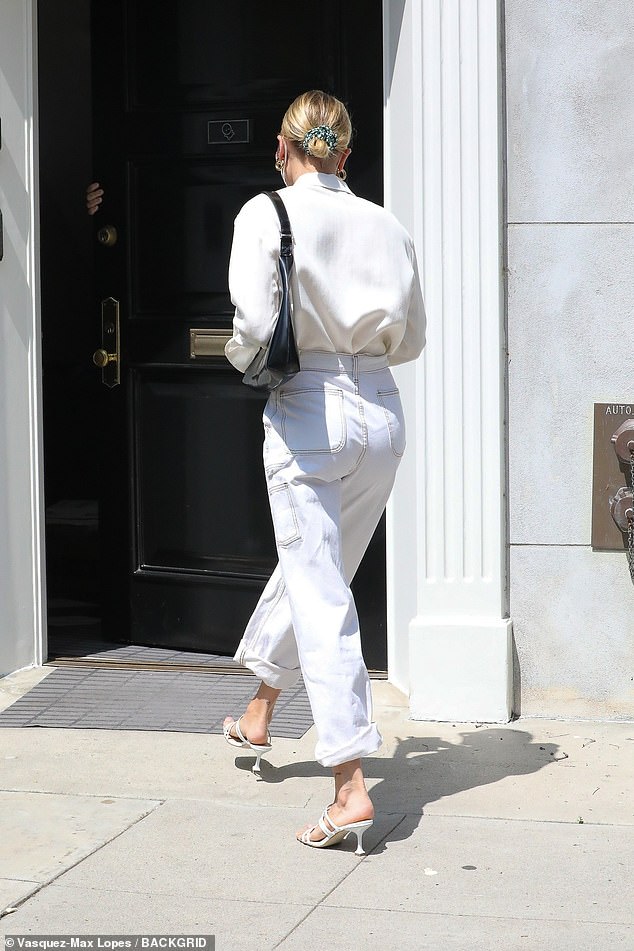 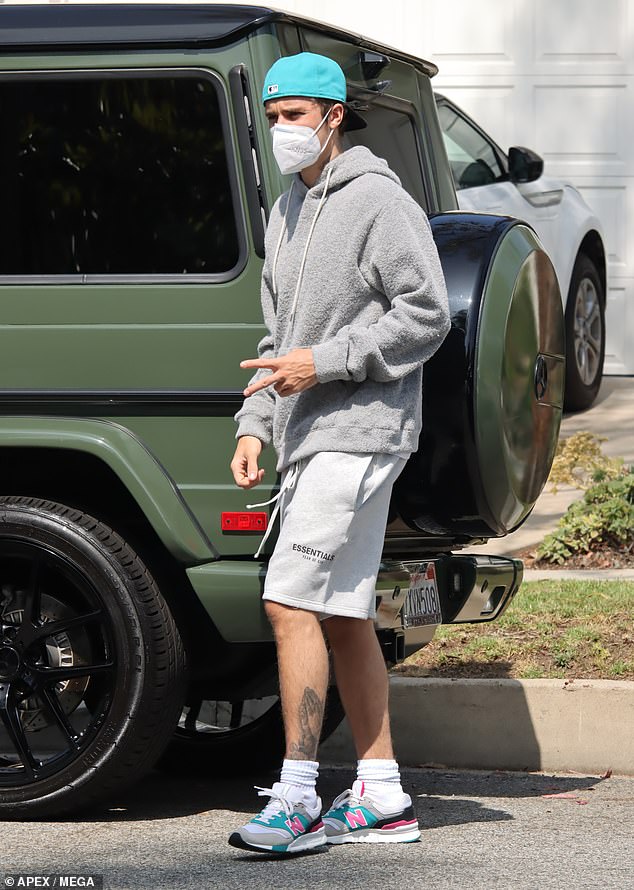 Covered up: They both opted to wear face masks, as required in public by the city of LA, amid the coronavirus pandemic

Covering almost every inch of her face was clear acetate rim sunglasses and a disposable white face mask, similar to her husband.

Face masks are required when in public in Los Angeles as the city continues to grapple with the pandemic and remains with safer-at-home orders.

California recently became the fourth state with over 100,000 cases of the novel coronavirus, according to CNN, as the United States recently recorded 100,000 deaths due to the virus. 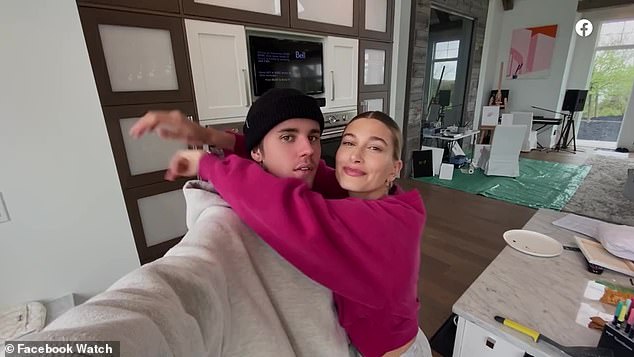 Love: Hailey recently talked about how happy she was to be making memories with hubby Justin during quarantine as they baked cookies in the latest episode of The Biebers On Watch

Hailey recently said she’s creating some of her ‘favorite memories’ during quarantine with Justin.

The couple showed off their domestic side as they taught fans how to make gluten-free chocolate chip cookies during this week’s episode of their Facebook Watch series The Biebers On Watch.

And Hailey and Justin certainly looked like they were enjoying their time inside, lavishing each other in affection while baking up their treats.

During their break the duo got sentimental, with Hailey sweetly telling Justin: ‘I love you and we’re creating my favorite memories ever.’ 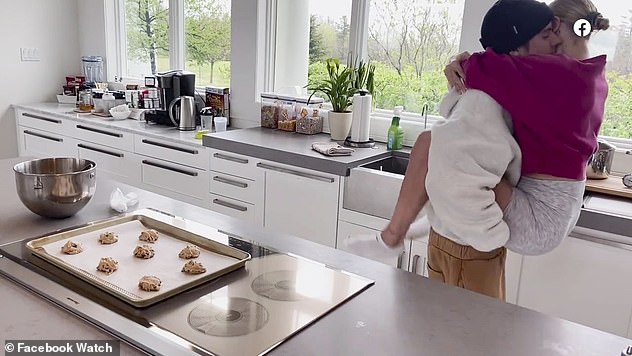 Ooh la la: During their break the duo got sentimental, with Hailey sweetly telling Justin: ‘I love you and we’re creating my favorite memories ever’

Mr. Bieber agreed, telling his other half: ‘I really enjoy this time with you. I know it’s been a really crazy time being in quarantine and the world is kind of upside-down but I’ve really enjoyed spending my time with you.’

Then he hammed it up a bit, quoting his new song Stuck With U, a collaboration with Ariana Grande.

‘I wouldn’t want to be stuck with anybody else,’ he said. ‘See what I did there?’ 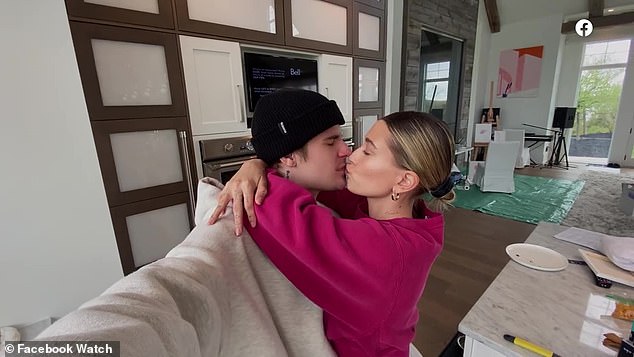 Cheesy: He hammed it up a bit, quoting his new song Stuck With U, saying ‘See what I did there?’

The couple are currently back in Los Angeles after spending time at Justin’s home  outside of Toronto, Canada.

They documented much of their isolation on their new web series, The Biebers on Watch.

The series gives fans a peek into Justin and Hailey’s day-to-day, while the stars also offer insight into their relationship and personal lives. New episodes are released weekly on Wednesdays.