Justin exhibit: A Justin Bieber exhibit opened at at a museum in Canada on Sunday

Justin Bieber fans rejoice because there is now a museum exhibit dedicated to the Canandian singer-songwriter.

On Sunday, the Stratford Perth Museum in Ontario, Canada, opened ‘Steps to Stardom,’ an exhibit devoted to Justin Bieber, 23, who was born in the North American country.

The display features 57 items such as sneakers, jackets, awards, photos, fan art and musical gear all at one point belonging to the singer during his childhood and early career.

General Manager of the Stratford Perth, John Kastner, decided to open the show after constantly being asked about doing an exhibit for Justin.

So when he, along with other museum staff, started to plan for the 2018 shows, they team decided to try it out.

But not without some help from Justin’s family.

First, John paid a visit to Diane and Bruce Dale, Bieber’s grandparents, according to Toronto Life. 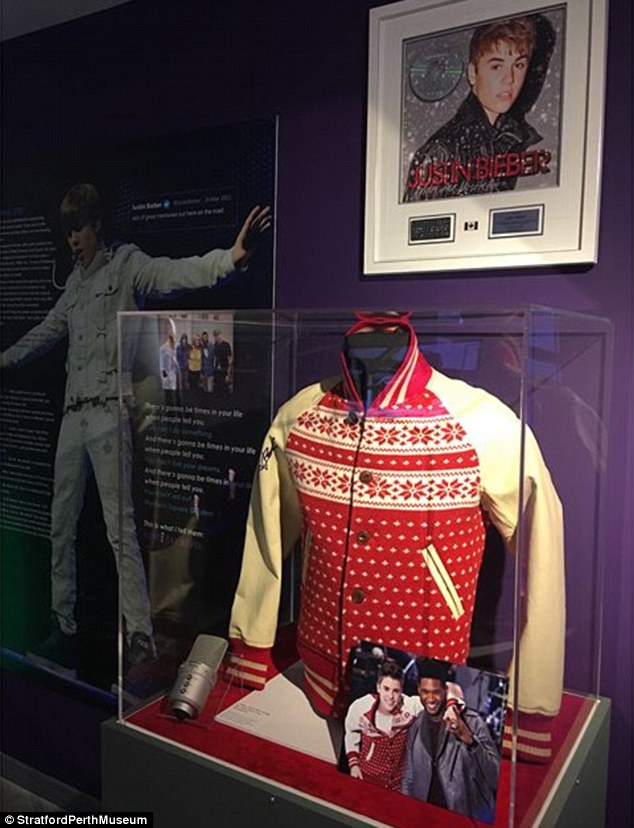 More than 50 items: The exhibit includes 57 items such as this jacket from his childhood and early career 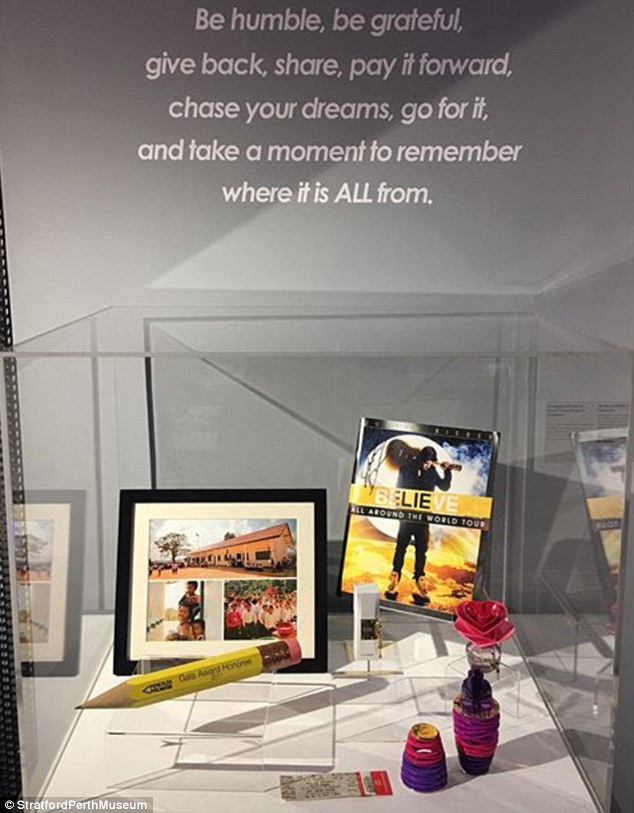 Asked all the time: General Manager of the Stratford Perth decided to open the show after being asked about doing an exhibit for Justin 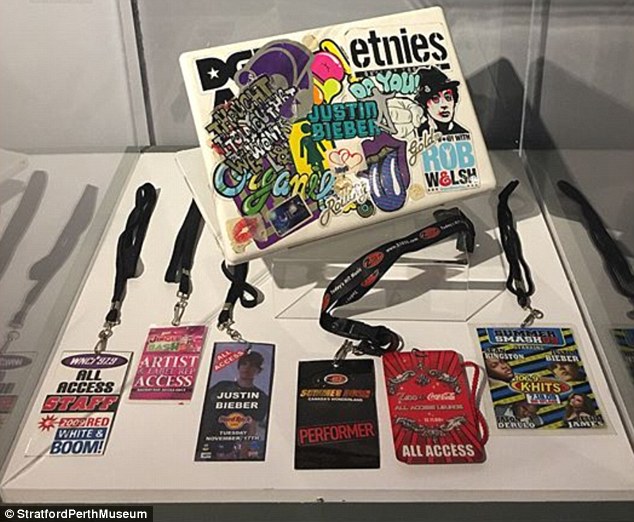 Asking permission: John and the museum team decided to give it a shot but had to ask Justin’s grandparents beforehand

Justin’s grandparents were thrilled about the idea and had a lot of relics from their grandson that they had kept over the years.

John told Toronto Life: ‘They are the most doting, loving grandparents anyone’s ever had. They didn’t just keep his Juno Awards and Teen Choice Awards – they kept his library cards and track-and-field ribbons.’

‘Their house is a museum. They’re the curators of his life.’

The Dales then asked Justin for his permission to open an exhibit in his honor to which their grandson gave his blessing.

The museum shared some photos on their Instagram of fans who were excited to be some of the first to see ‘Steps to Stardom’ and some the display items featured.

Some of the memorabilia included T-shirts with Justin’s face printed on them, a cardboard cutout of the pop star, soccer cards of the Justin from when he was little, and a platinum record from Malaysia. 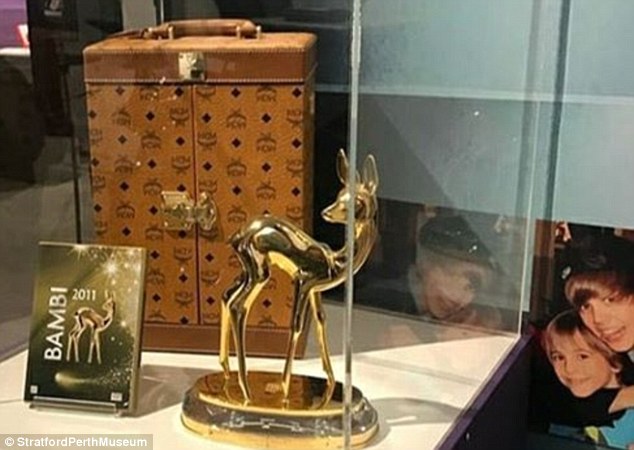 Bambi Award: Justin won the Bambi award in 2011 which is one of the items in the exhibit 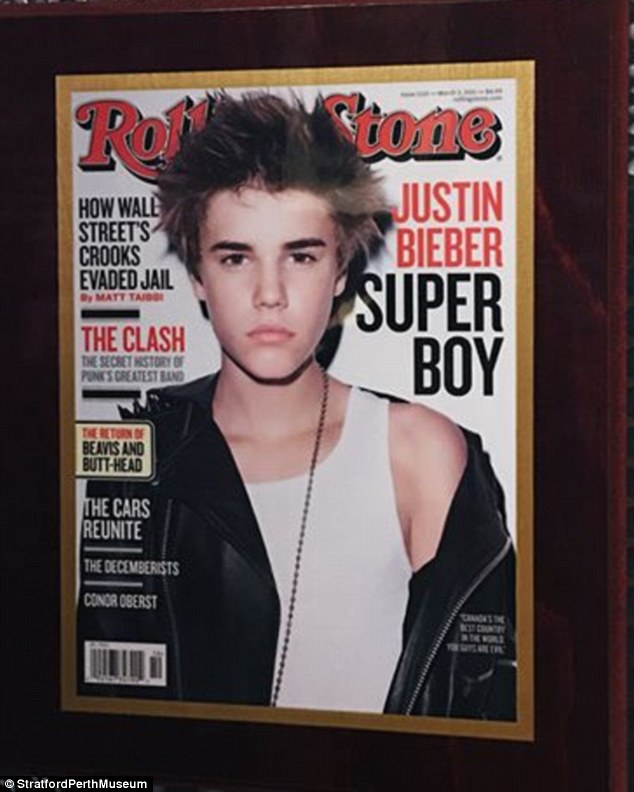 Young artist: A copy of his Rolling Stone cover is also put on display for fans to see 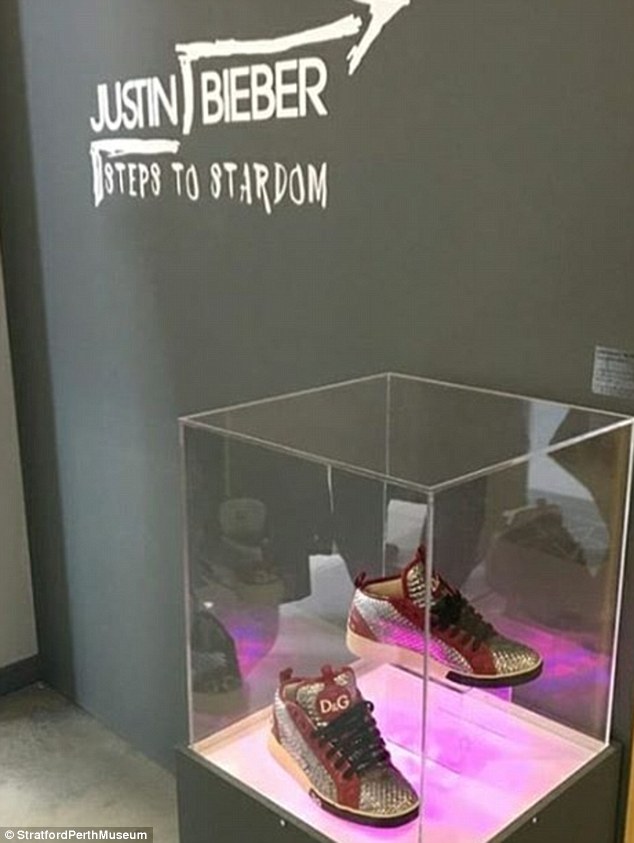 Steps to Stardom: The title of the exhibit, which includes a diamond-studded pair of Dolce and Gabbana sneakers is called ‘Steps to Satrdom’ 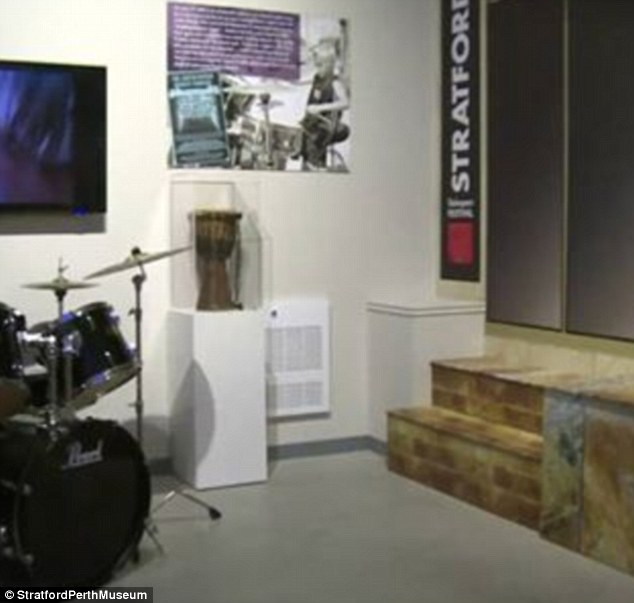 Talented musician: A drum set he played on is also in the Steps to Stardom exhibit

The museum had to leave a lot of awards and trophies at Justin’s grandparents.

John told Toronto Life: ‘They had Junos, they had Country Music Awards, they had all that stuff.’

But he chose to include the platinum record from Malaysia because it was a bit of an odd one and loved the idea of a Justin making it all the way on the other side  of the world.

He said: ‘It’s framed and just so over-the-top. I immediately said, ‘We should grab that.”

There is also a jacket that belonged to Justin, an old laptop and VIP badges, his Around the World Tour book, his hockey stick and jersey, a rubics cube, a drum set, and his Rolling Stone magazine cover.

And lastly, among the 57 items, there is also a old gym bag, his platinum record, Dolce and Gabbana diamond-studded sneakers, his Bambi Award, which he got in 2011, underwear that he got from comedian Ellen DeGeneres and his Teen Choice Award, which comes in the form of a surfboard. 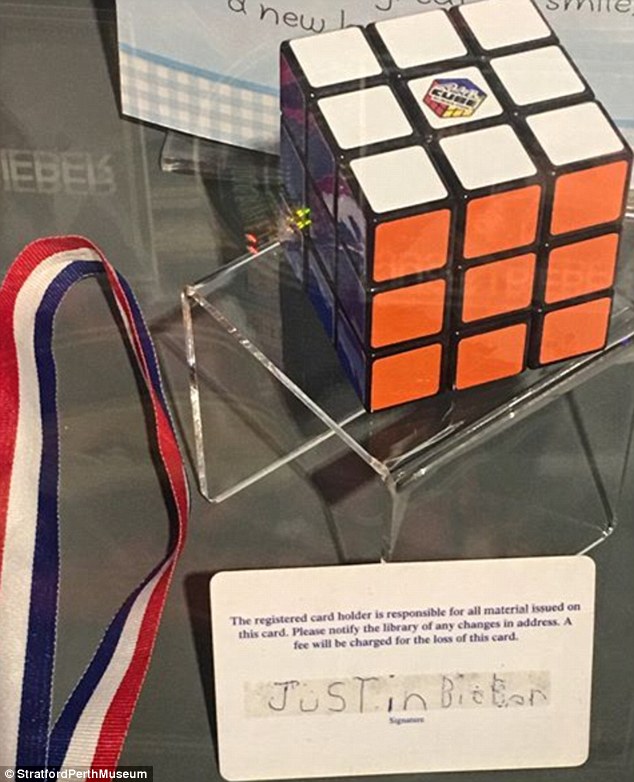 Keeping everything: John said Justin’s grandparents kept everything – even his library card 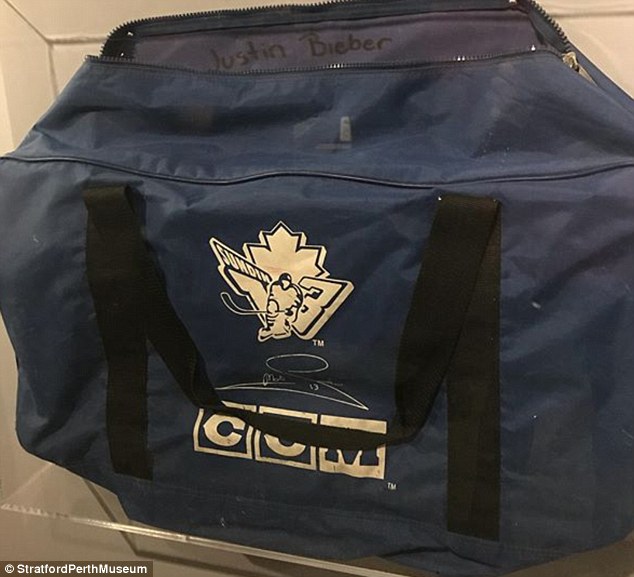 Gym bag: One of Justin’s hockey bags which has his name inside was also in display 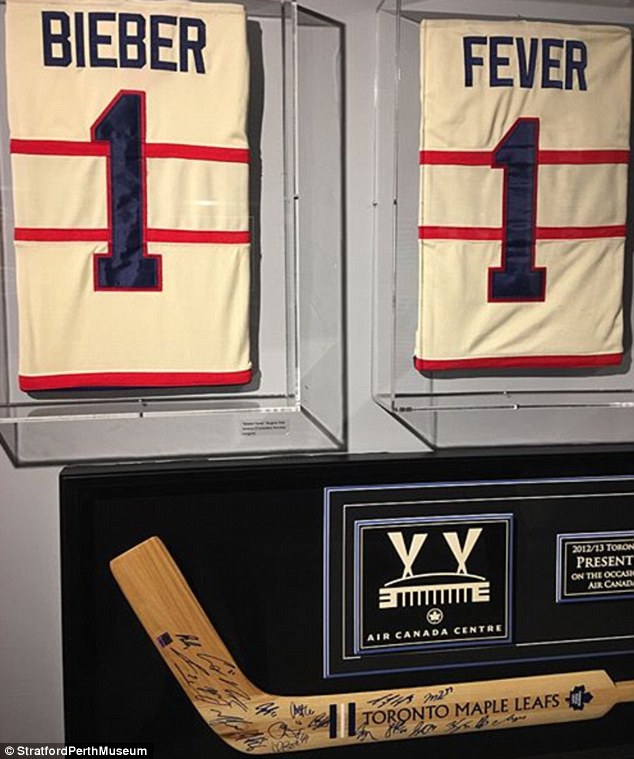 More hockey gear: More hockey items of Justin’s such his jersey was featured as well 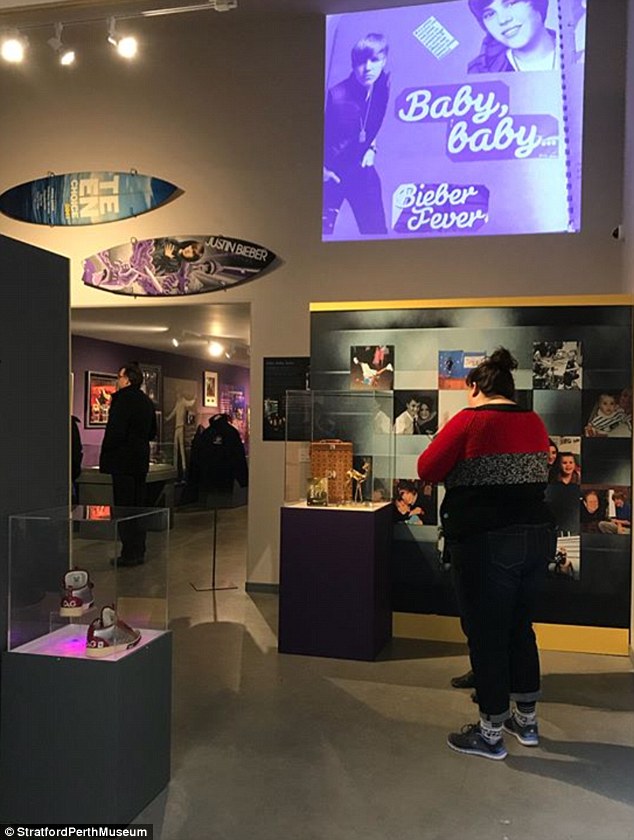 Full display for fans: The exhibit it supposed to last until the end of the year but possibly longer based on demand

John wanted to feature the Teen Choice Award because there was a funny story behind it.

Justin was awarded the honor in 2011 for his brief cameo on CSI rather than his singing prowess.

And John that it was so crazy how six weeks before the acting stint, he was in high school.

And fans who didn’t get a chance to go to the opening made sure their disappointment was known on social media.

One fan said: ‘Well the number two thing on my bucket list (number one being to go to the packer game) is to now go to Canada to Statford, Ontario, to visit the Startford Perth Museum and see the Justin Bieber exhibit.’

Another fan tweeted: ‘Everyone is talking about going to Justin Bieber’s Museum and I’m over here like yeah I wish I could go.’ 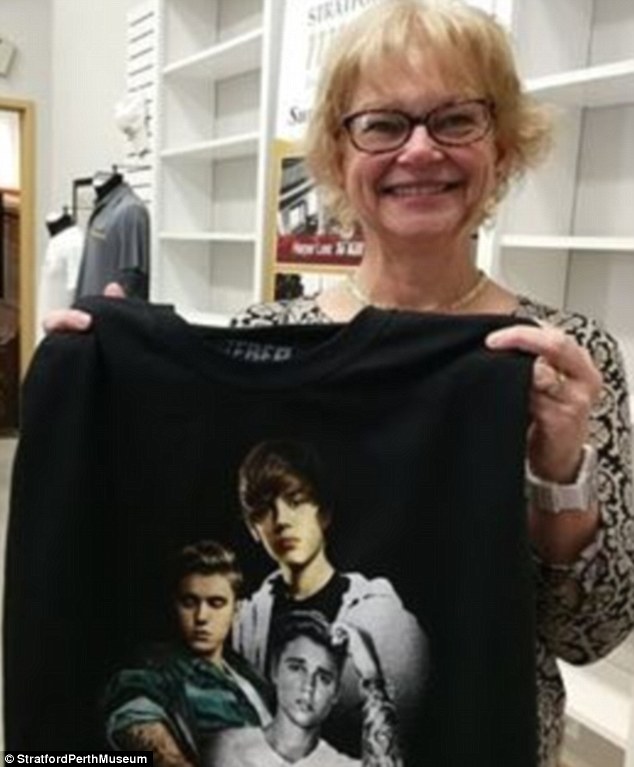 T-shirt time: The museum shared a picture of one fan at the exhibit holding a Justin Bieber shirt 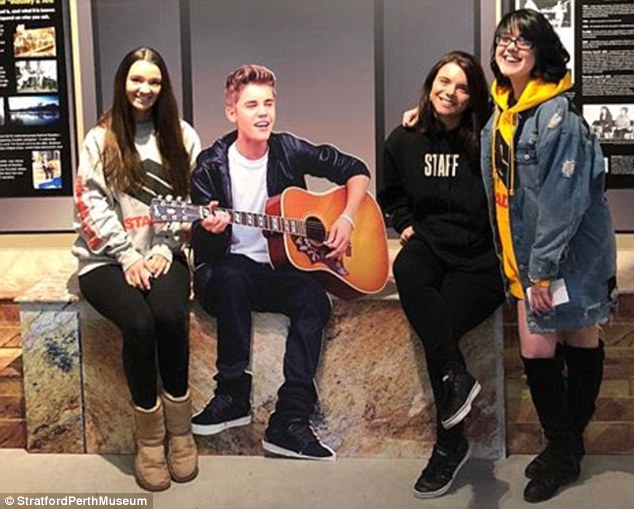 Cardboard perfect: Although Justin wasn’t there, fans still took a snap of his cardboard cutout 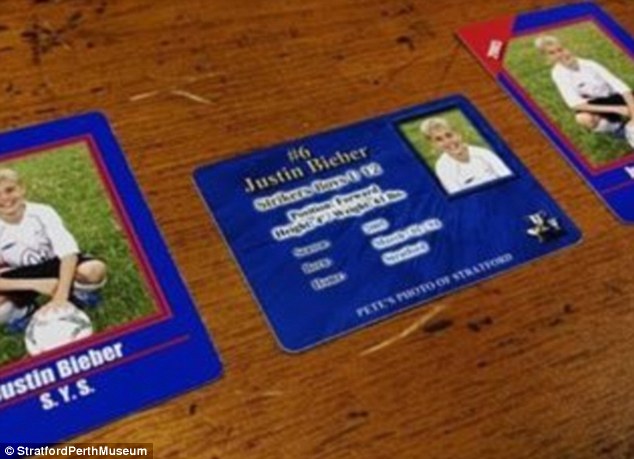 Life curators: John said that Justin’s grandparents were the ‘curators of his life’ as they had so many things from when he was younger 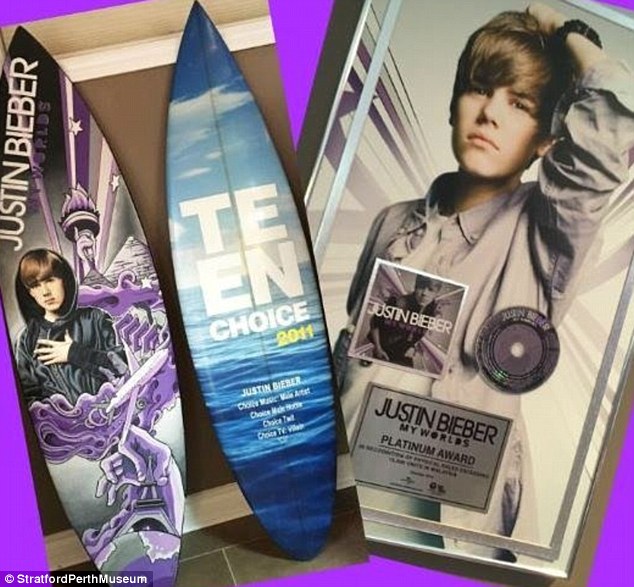 Teen Choice: Justin was awarded the Teen Choice award in 2011 for his acting stint on CSI

And another shared that their life goal was to one day go the the museum in a tweet that said: ‘Wow, all I want in life is to go to the Justin Bieber museum in Canada.’

But fans will have plenty of time to see the show as it will be on display until the end of the year, as of now, but the museum is open to extending it based on the popularity of the exhibit.

And so far, tickets for the exhibit seem to be in high demand with fans, including Justin’s mother, Patricia Mallette, already seeing the display.

The mother and son are very close and even shared a picture to her Instagram of her at the exhibit with the caption: ‘Had fun checking out the new Justin Bieber exhibit at the Stratford Perth Museum opening today! Good job.’

And just last month, posted a sweet tribute on Instagram to her son while they were vacationing in the Maldives.

Bucket list: fans who couldn’t go to the exhibit shared their disappointment on social media

‘I wish’: One fans said she ‘wishes’ she could go to the Justin Bieber exhibit

‘All I want’: And another said that all she wanted was to go to Canada for the exhibit 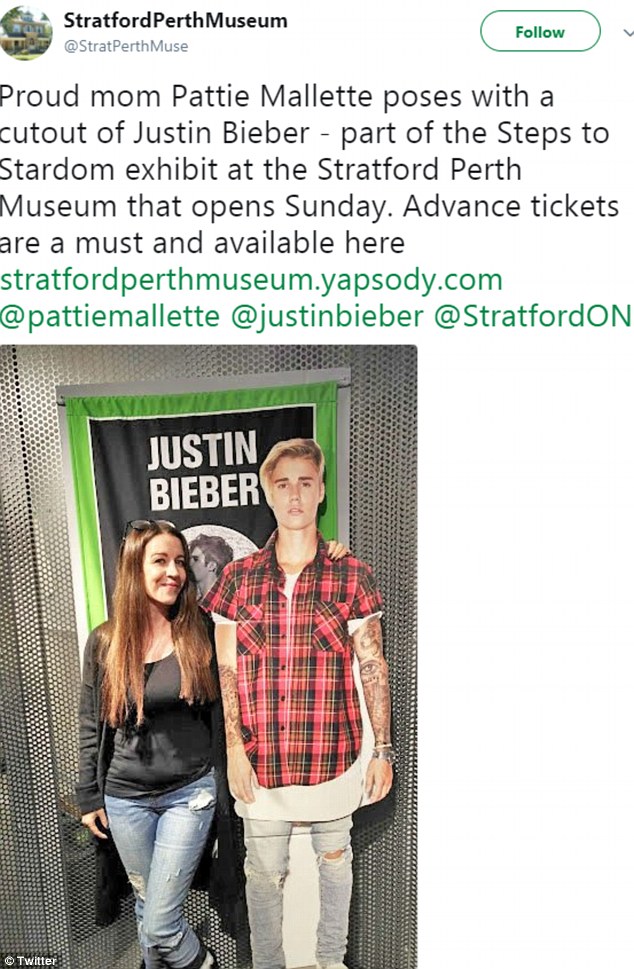 Proud mom: The museum shared a picture of Justin’ mom, Patricia Mallette, at the opening

‘None of us are perfect and never will be, (so we will always need patience and grace for each other), but your genuine growing relationship with Jesus is evident in the choices you are making daily and the good “fruit” you bear.’

‘I admire your character and integrity. You are maturing beautifully and wise beyond your years.’

She continued: ‘You are so funny that I find myself laughing out loud when I’m alone, remembering of something you said or did. And your heart is gold. I love you to the moon and back.’