Justin Bieber really loves his wife and wants everyone to know it.

To mark Hailey Bieber’s 23rd birthday on Friday, the pop star posted photos from their wedding along with a bold caption where he said the model ‘turns me on in every way.’ The Sorry singer added that babies are in their near future.

By the afternoon, the singer was spotted taking his wife for a birthday lunch at the popular Japanese restaurant, Nobu, in Malibu.

Birthday wishes: To mark Hailey Bieber’s 23rd birthday on Friday, Justin Bieber posted photos from their recent wedding along with a bold caption hinting at BABIES in their future before taking her out for a low-key lunch celebration

‘Happy birthday babes,’ the Canadian began in the caption of his birthday wedding post.

‘You make me want to be better everyday! The way you live you life is so attractive.’

He added: ‘Ps you turn me on in every way, next season BABIES.’

The couple initially tied the knot in a courthouse ceremony in NYC in September 2018 and they had a lavish ceremony, marrying for a second time this past September. 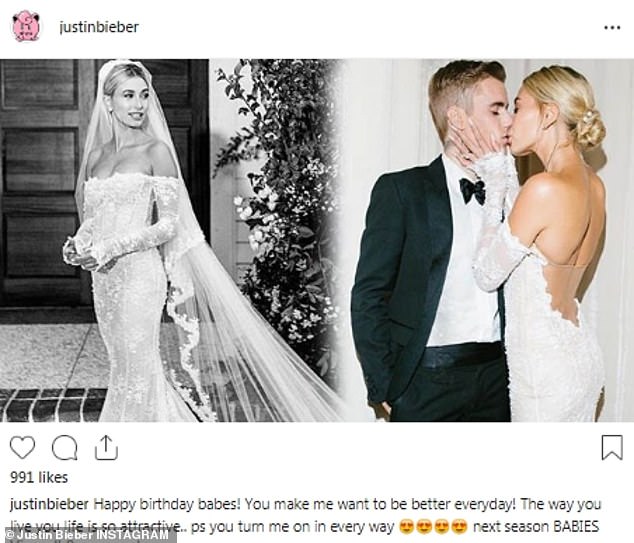 Next up: The pop star added: ‘Ps you turn me on in every way, next season BABIES,’ they married in September 2018 and had a second lavish wedding this past September 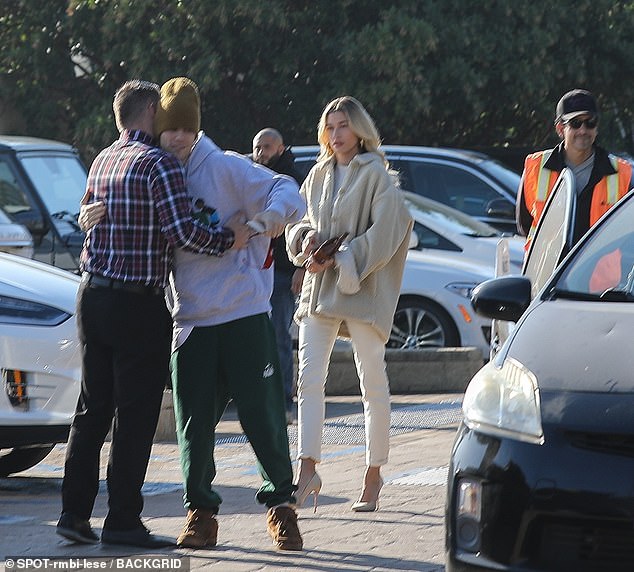 Warm welcome: When the couple arrived for the birthday lunch they were greeted by a male friend outside of the restaurant in Malibu 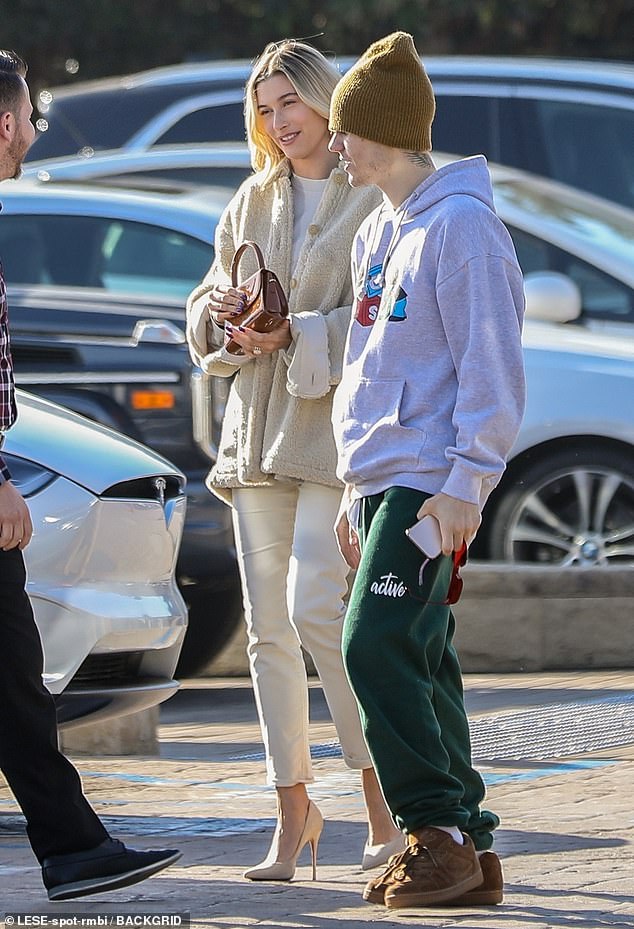 Catching up: The trio chatted briefly after hugging it up in the parking lot 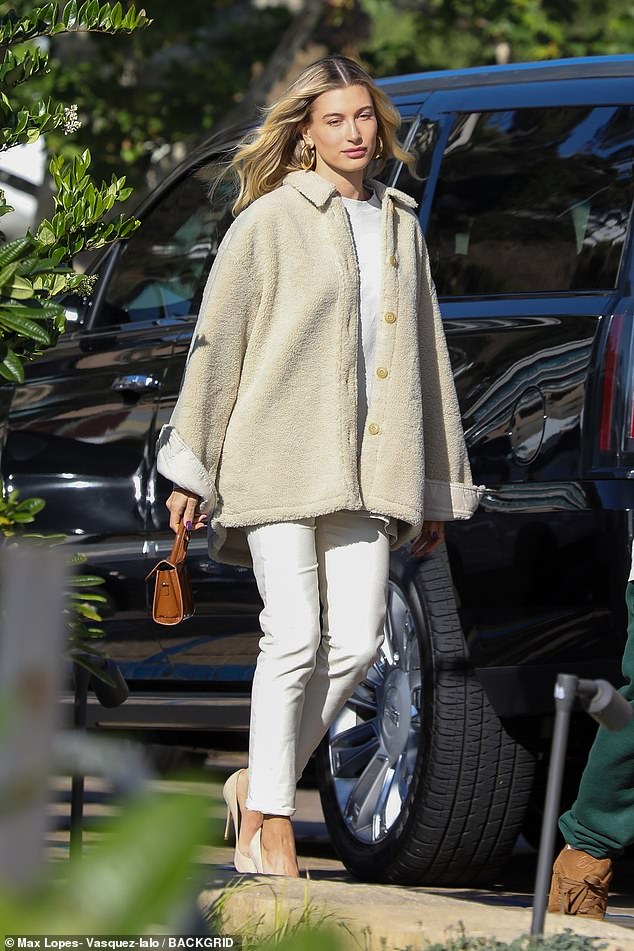 Stylish: Hailey looked stylishly coordinated in cream-colored pants that fell short of her ankles with a matching top, jacket and heels

The hot and heavy couple were enthusiastically greeted by a male friend moments after arriving for the low-key birthday celebration.

After exchanging good wishes and some hugs, the three headed towards the entrance to the restaurant.

Hailey looked stylishly coordinated in cream-colored pants that hugged her lean figure, but fell short of her ankles.

She matched in perfectly with her top, a light furry coat and heels, and wore her blonde tresses long and flowing, with some added volume and a part in the middle. 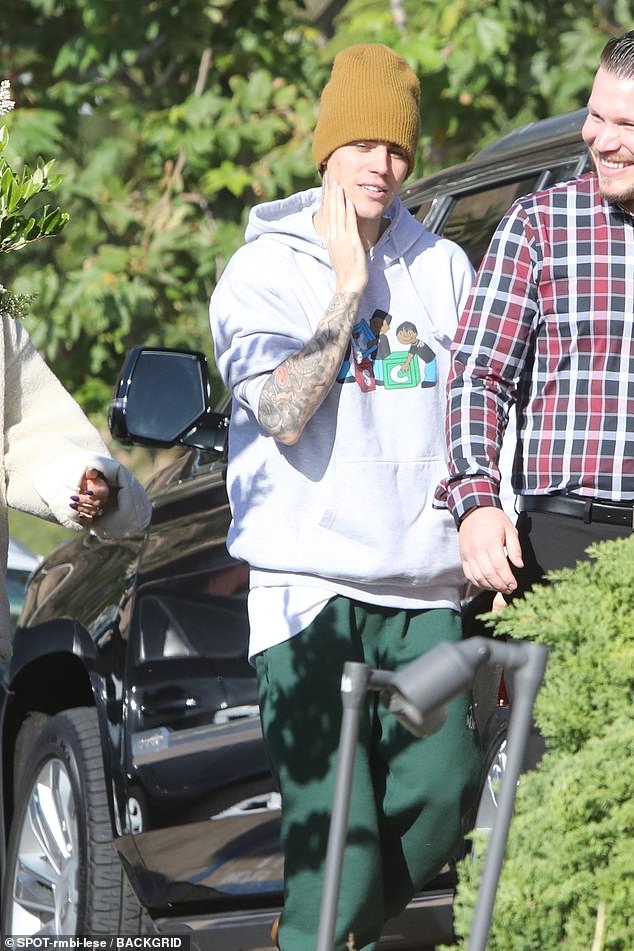 Laid back: The Sorry singer, 25, kept it much more casual in a grey hoodie and green sweatpants and brown sneakers and beanie 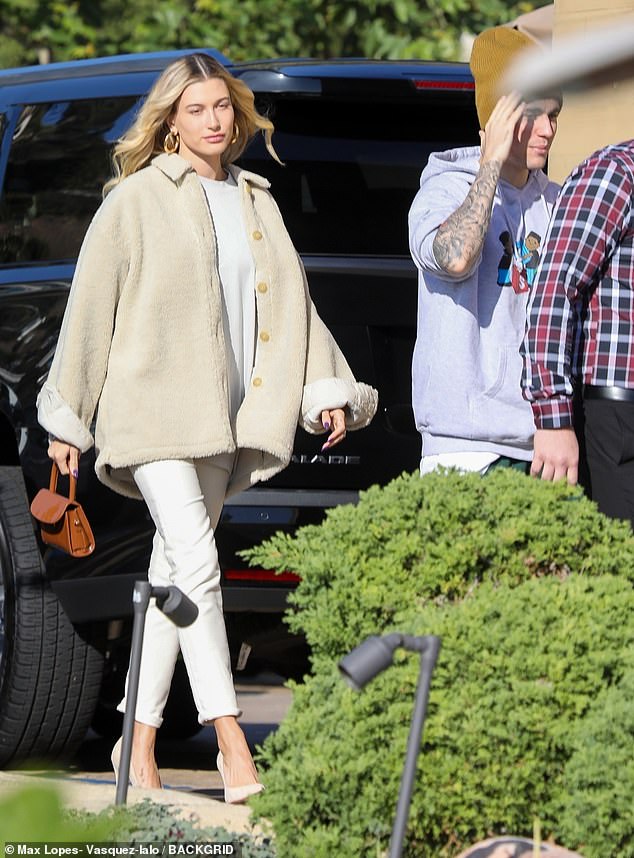 History: The couple first met in 2009 and were just friends for years before a brief fling in 2015 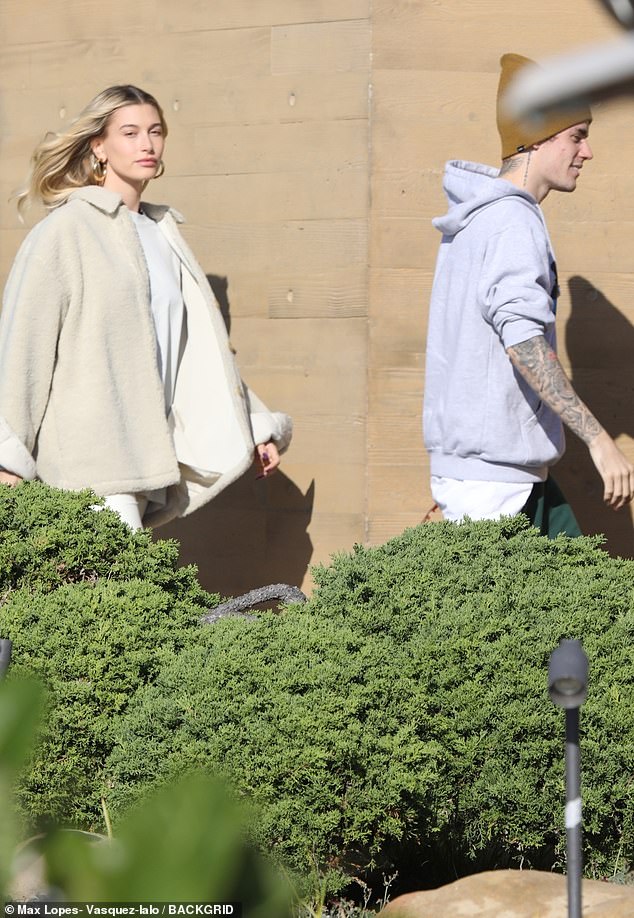 Living the life: The couple live a sort-of bi-coastal life for the most part, spending much of their home life in New York and Los Angeles

The Sorry singer, 25, kept it much more casual casual in a grey hoodie and green sweatpants.

His sweatshirt had three male figures that appeared to be drawn as children, arranging blocks that each had one letter writing ‘CSC.’

He teamed the look with tawny colored sneakers and beanie.

For the most part, Bieber wore the exact same ensemble when he took in a dance class at Playground L.A. earlier in the morning.

Solo morning: Earlier in the morning, the couple got in workouts separately 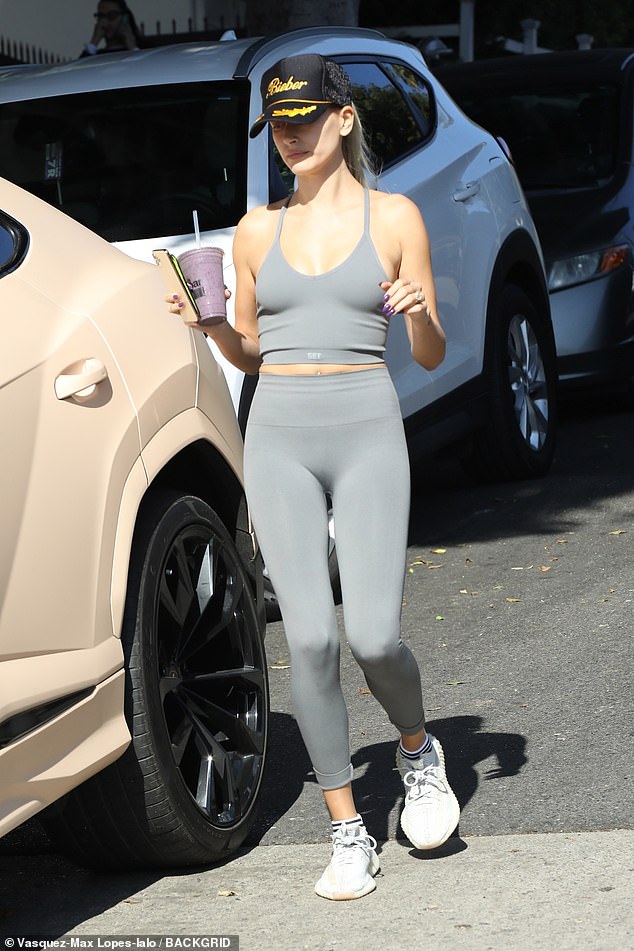 Fit and ready: The Arizona native showed off her curves in grey leggings and sports bra 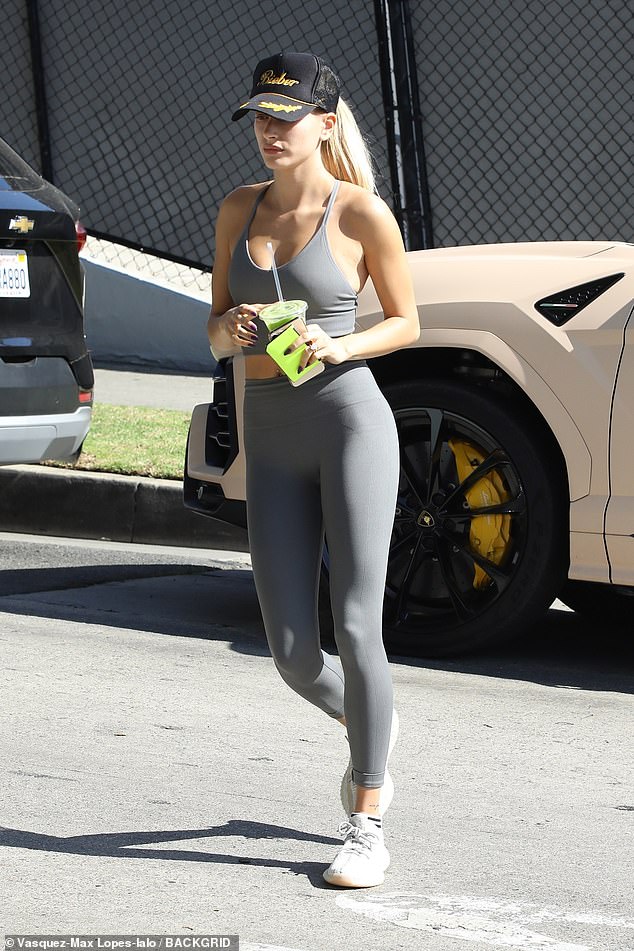 Too tired to party: While her birthday was expected to be a big event, Hailey revealed to Highsnobiety that she is ‘too tired’ to throw the party she wanted 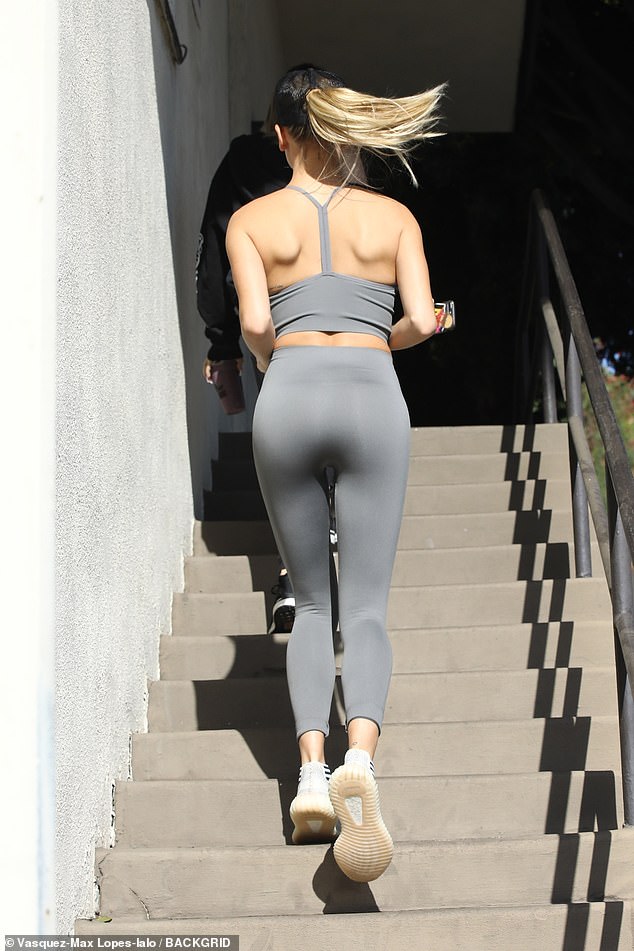 Mogul on the rise: In the interview she also hinted that she wants to become a mogul, like friend Kylie Jenner 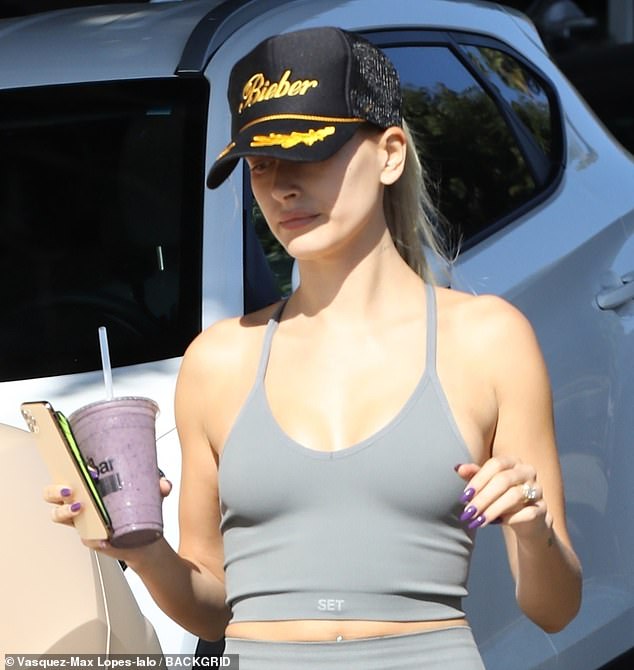 Reppin’: She hid her hair under a black cap with ‘Bieber’ emblazoned in gold on the front

While the Biebs was sweating it out on the dance floor, his wife was across town getting in a workout at a gym decked out in grey leggings and sports bra that flaunted her toned abs.

The Guess model arrived in Justin’s $200k Lamborghini Urus that he recently had custom painted a sandy color.

She had her blonde locks tied back into a ponytail and under a black baseball cap, emblazoned with ‘Bieber’ in gold cursive writing.

Before and after her workout, she was seen enjoying a green juice and a purple juice. 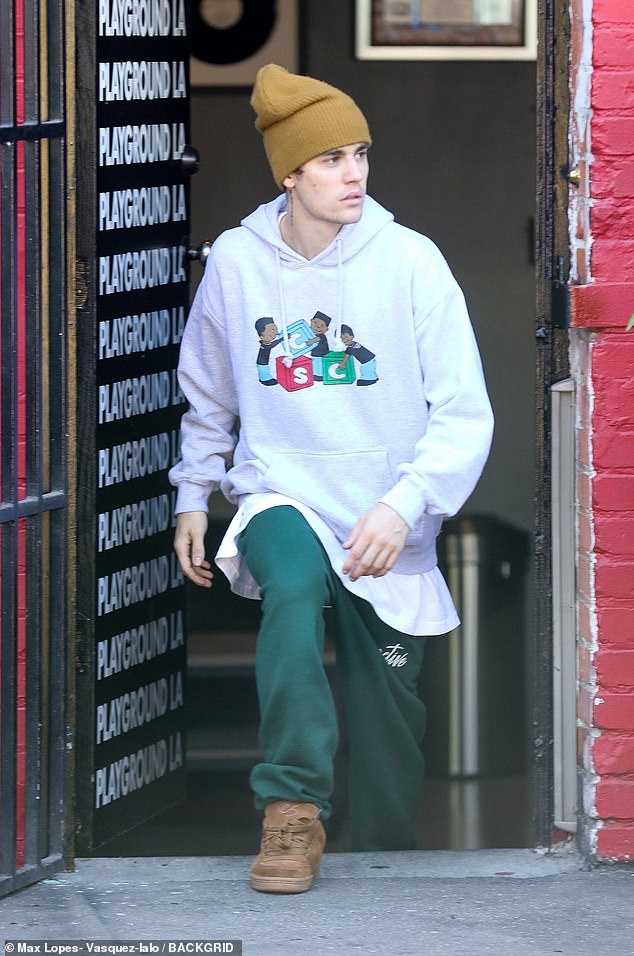 His look: Bieber wore nearly the same outfit for the dance class in the morning

Hooded: A long white T-shirt stuck out past the hem of the hoodie during his dance class

While her birthday was expected to be a big event, the model revealed to Highsnobiety that she is ‘too tired’ to throw the party she wanted.

‘Its my Jordan year,’ she said referencing the number of famous basketball player Michael Jordan.

Adding: ‘I’m turning 23 (today, November 22), and I had this idea where I was going to throw a Jordan party and everyone would have to wear Jordan. But I’m just too tired, I don’t want to entertain people.’ 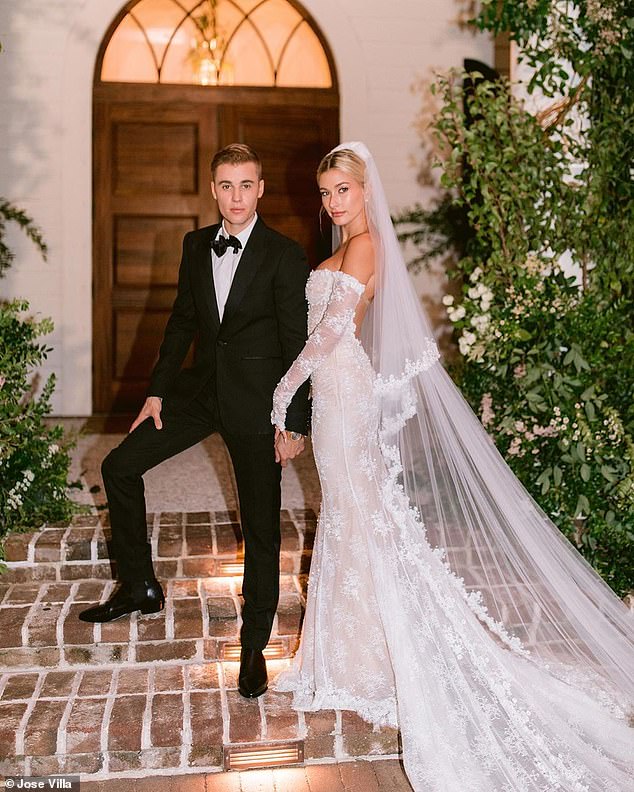 Twice as nice: The couple were married for a second time in September after officially tying-the-knot in a New York City courthouse a year earlier

Though she didn’t mention babies like her husband, in the interview she hinted she wants to become a mogul, a-la friend Kylie Jenner.

‘The goal is to build many brands associated to my name,’ she said. ‘I have a lot of goals. I’m still young, so there’s no rush. I love clothes, it’s a big reason why I love being in fashion and why I’m doing this.’

Hailey also said she wants to get more involved in charity and using her platform.

‘In 2019, I was having this internal struggle. I felt like I’m not doing enough or I’m not using enough of my platform or voice to talk to young women, or talk about things that matter.’ 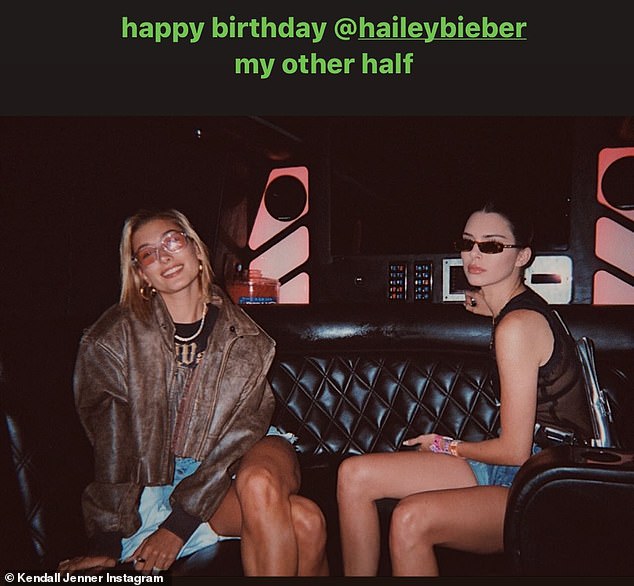 Two halves: Kendall Jenner also penned a birthday tribute to Hailey, calling her ‘my other half’