Justin Bieber has been sharing some behind-the-scenes photos of his life on Instagram.

Some of the most fun and relaxed shots are from a private performance the singer, 28, put on at a superhero themed party.

BTS: Justin Bieber, 28, has been sharing some fun photos  taken by his personal photographer, Rory Kramer, on social media after resuming his Justice World Tour

It’s unclear when the photos were taken. Hailey, 25, decided to dress as one of Spidey’s biggest enemies – The Punisher – in a form fitting unitard featuring a skull on the torso.

The influencer styled her hair in a pony tail using a hair clamp.

In some of the snaps, the Grammy winner seemed to be putting on his own version of The Masked Singer, by wearing the mask while performing on a comic book  themed stage. 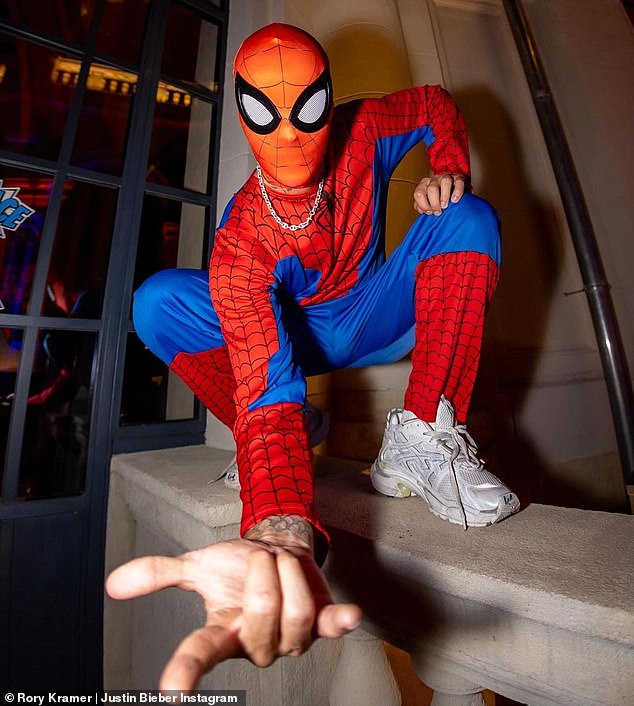 Spider-Man: The Yummy singer dressed as Spider-Man for a private performance 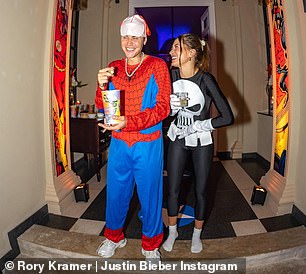 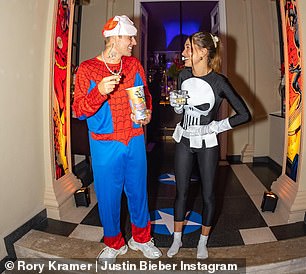 Costume time: While Justin dressed as the webbed wonder, Hailey decided to get decked out in the form of arch villain The Punisher 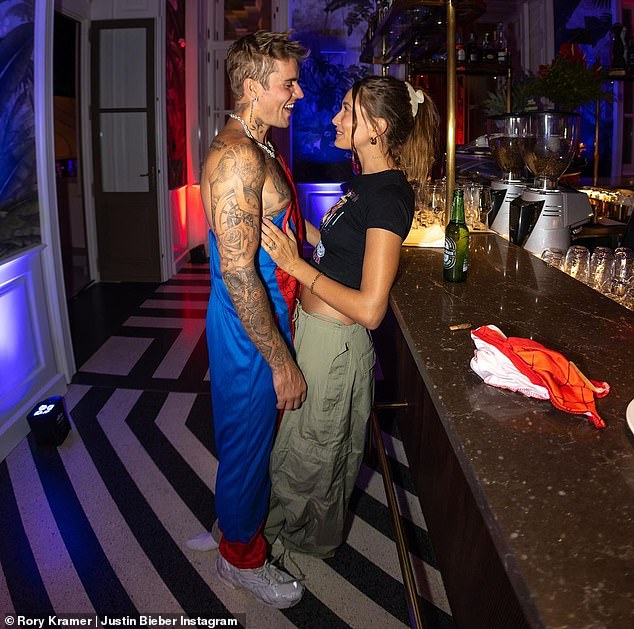 Anniversary:  The young couple, who appear very much in love, will soon celebrate their fourth wedding anniversary

Justin posed with several folks at the private soiree, some costumed, some not.

He and Hailey were shown smiling broadly as the MTV Music Award winner enjoyed some popcorn while his wife sipped a cocktail.

Other pics show the young couple sharing some romantic moments later in the evening. 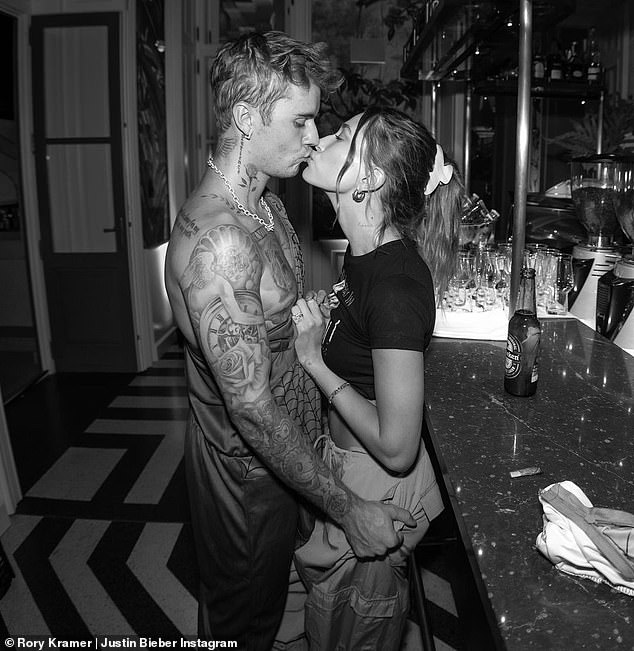 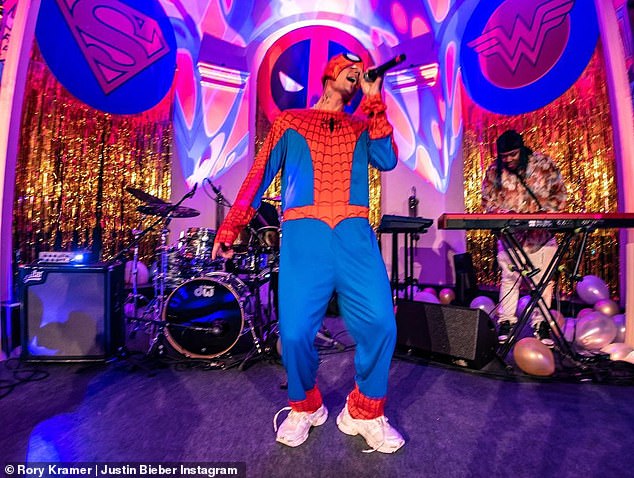 Masked singer: Justin seemed to enjoy his version of The Masked Singer, performing at the superhero themed party with his mask on

Justin and Hailey will soon celebrate their fourth wedding anniversary.

Each has been through some medical complications this year.

In March, the Rhode founder was rushed to the hospital after suffering from what doctors called a mini-stroke, caused by a small blood clot to the brain.  The condition was caused by a small hole in her heart, which has now been closed.

Justin, who was on his Justice World Tour, had to cancel dates indefinitely after he suffered facial paralysis brought on by Ramsay Hunt Syndrome.

He announced he would resume the tour in July and has posted video from his recent concert in Finland. 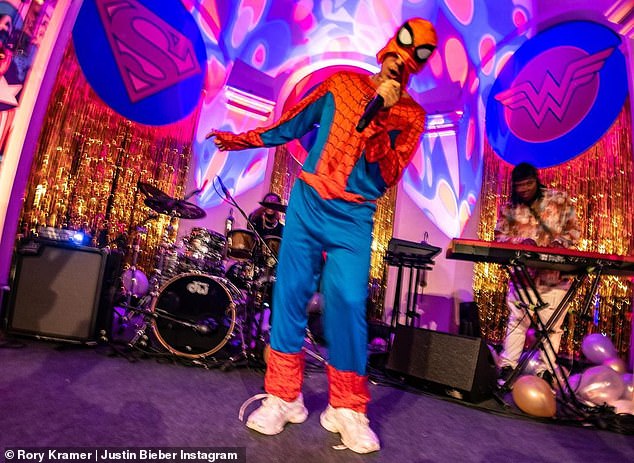 Fine form: It’s unclear when the photos were taken, but the Love Yourself artist seems to be in fine form 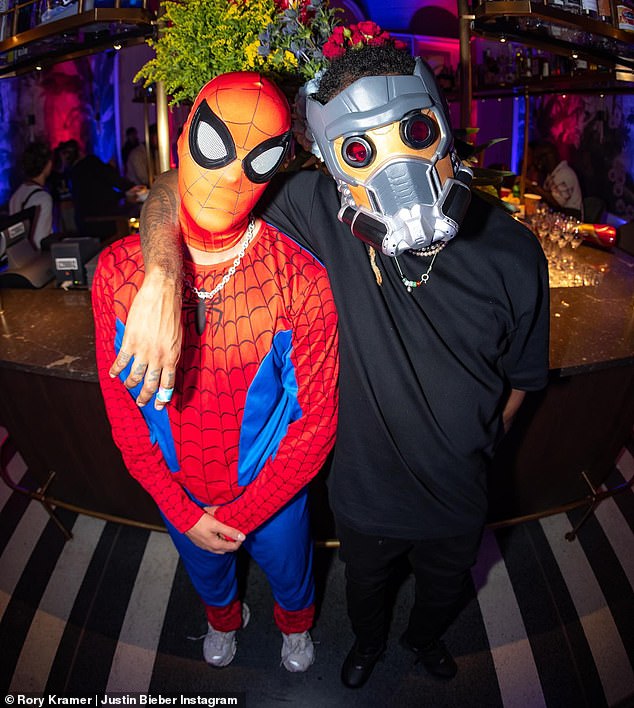 Private party:  The Peaches singer posed with several of the guests at the private party 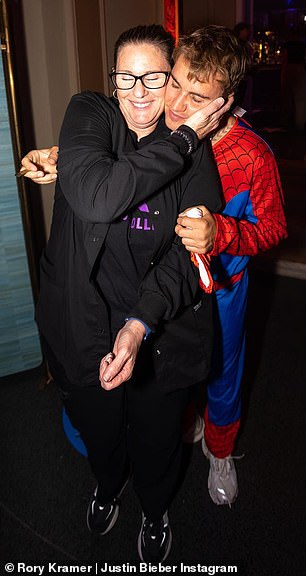 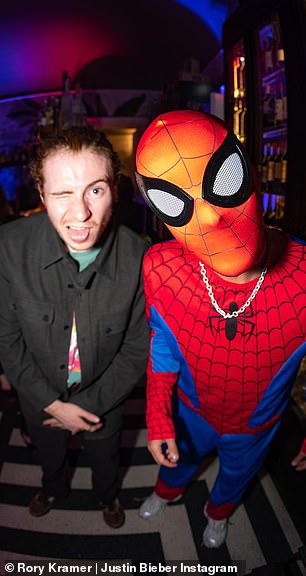 Friends: The hitmaker seemed to enjoy sharing a warm embrace with one friend, while enjoying goofing around with another 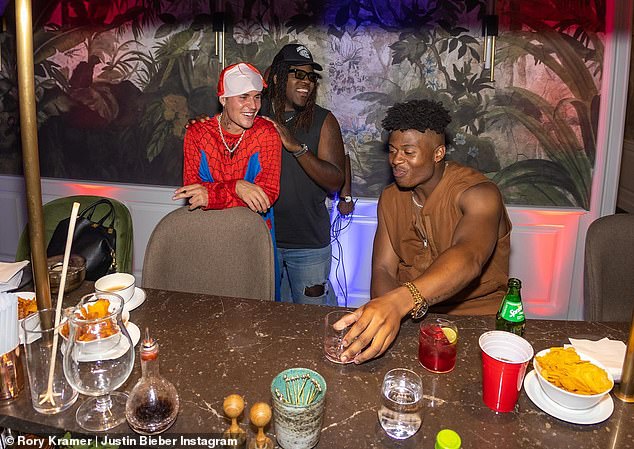 Downtime:  Justin and friends enjoy some downtime after his private performance