TORONTO (AP) – Justin Smoak homered with two outs in the ninth inning to give the Toronto Blue Jays a 9-8 victory over Tampa Bay on Thursday night, dealing a blow to the Rays’ wild-card playoff hopes.

Smoak hit his 25th homer of the season and third career walk-off blast. Sergio Romo (3-4) blew his eighth save in 30 opportunities.

Right-hander David Paulino (1-0) pitched an inning for the victory as Toronto won for the fourth time in its past five.

Trailing 8-2 to begin the ninth, the Blue Jays roared back to snap Tampa Bay’s five-game winning streak. Tellez hit an RBI double and Danny Jansen chased Jamie Schultz with a three-run homer. Romo came on and struck out Richard Urena, but pinch hitter Kendrys Morales singled and Lourdes Gurriel Jr. tied it with a two-run homer to left.

Smoak followed with a first pitch drive to right, Toronto’s fourth homer of the game.

C.J. Cron had three RBI for the Rays, who dropped 6 1/2 games behind Oakland in the race for the second AL wild card. The Athletics routed the Los Angeles Angels 21-3 on Thursday.

Oakland has nine games remaining while the Rays have 10, including six more with Toronto. Tampa Bay is 9-4 against the Blue Jays this season.

Toronto’s Rowdy Tellez opened the scoring when he connected off Rays right-hander Ryne Stanek in the second, his second. The Rays answered against right-hander Sam Gaviglio in the fourth, when Pham hit an RBI triple and Wendle followed with a double.

Adames hit for Brandon Lowe with one out and runners at first and second in the sixth. Right-hander Jake Petricka replaced lefty Jose Fernandez (0-1), but Adames put the Rays in front with a ground ball single up the middle. Kevin Kiermaier walked to load the bases but Tim Mayza came on and struck out pinch hitters Cron and Carlos Gomez.

Stanek made his 27th start as the Rays used an “opener” for the 50th time this season. Yonny Chirinos (5-5) replaced Stanek after the first three batters reached safely in the second and pitched 4 2-3 innings.

Tampa Bay looked to have broken it open with a five-run, 10-batter seventh. Cron had the big hit, a two-out, bases-loaded bloop single that dropped in front of sliding left fielder Billy McKinney, allowing Kiermaier to score from first.

The Rays have not named a starter for Friday’s game. RHP Sean Reid-Foley (2-3, 5.54) starts for the Blue Jays. The rookie has struck out 10 in two of his past three starts, including a Sept. 15 victory at Yankee Stadium. 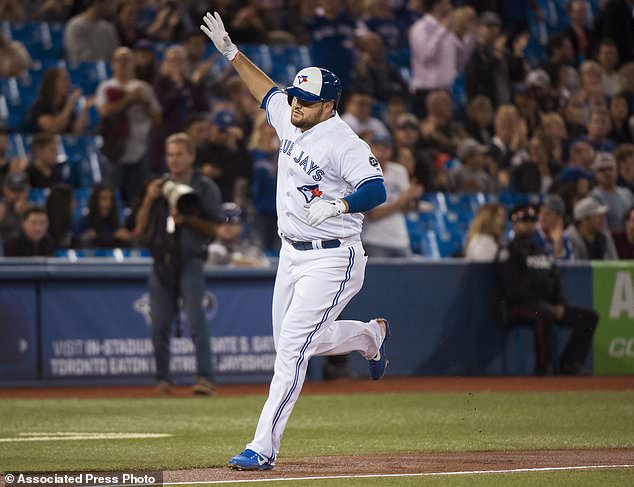 Toronto Blue Jays’ Rowdy Tellez round the bases after hitting a two-run home run against the Tampa Bay Rays during the second inning of a baseball game in Toronto on Thursday, Sept. 20, 2018. (Nathan Denette/The Canadian Press via AP) 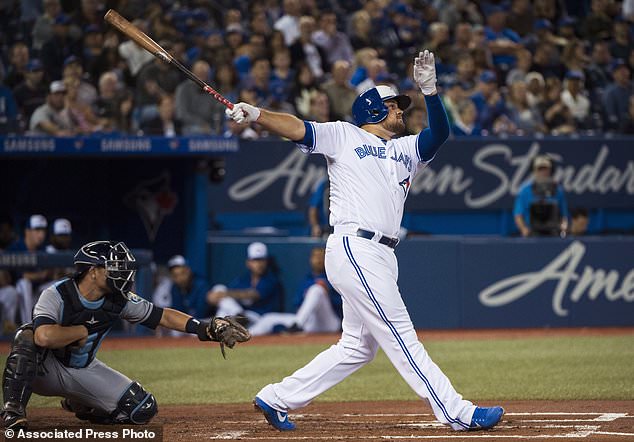 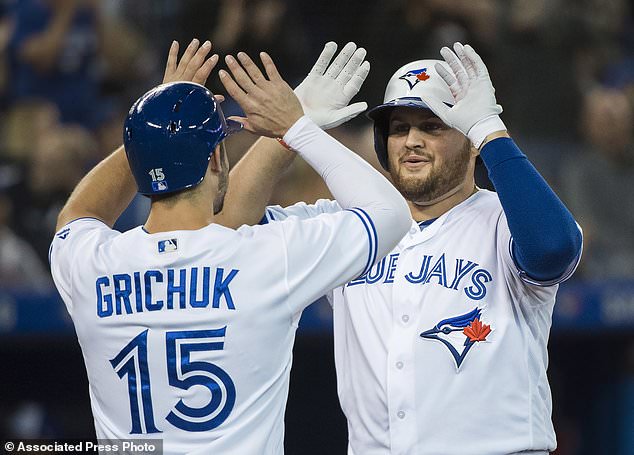 Toronto Blue Jays’ Rowdy Tellez, right, celebrates with Randal Grichuk (15) after hitting a two-run home against the Tampa Bay Rays during the second inning of a baseball game in Toronto on Thursday, Sept. 20, 2018. (Nathan Denette/The Canadian Press via AP)