Kaia Gerber opted for stylish comfort as she was spotted during a brief outing in Los Angeles on Friday.

The talented supermodel, 21, donned a simplistic look for the day, wearing a flowy shirt and fitted pants in the cooler temperatures.

The actress strutted on the runway for Celine during the brand’s Fall/Winter 2023 fashion show in LA on Thursday night, and was cheered on by her mother, Cindy Crawford, and other close family members sitting front row.

Keeping it casual: Kaia Gerber, 21, opted for comfort as she was spotted stepping out in Los Angeles on Friday

The beauty was seen easily making her way through a quiet block in the city, wearing a pair of brown, fitted pants.

She also donned a long-sleeved, blue button-up, along with a plain white shirt underneath for an additional layer.

To stay comfortable for her outing, Kaia slipped into a pair of blue and white Adidas sneakers to coincide with the color scheme of her top.

Her brunette hair was parted in the middle, and gently flowed past her shoulders in lights waves. 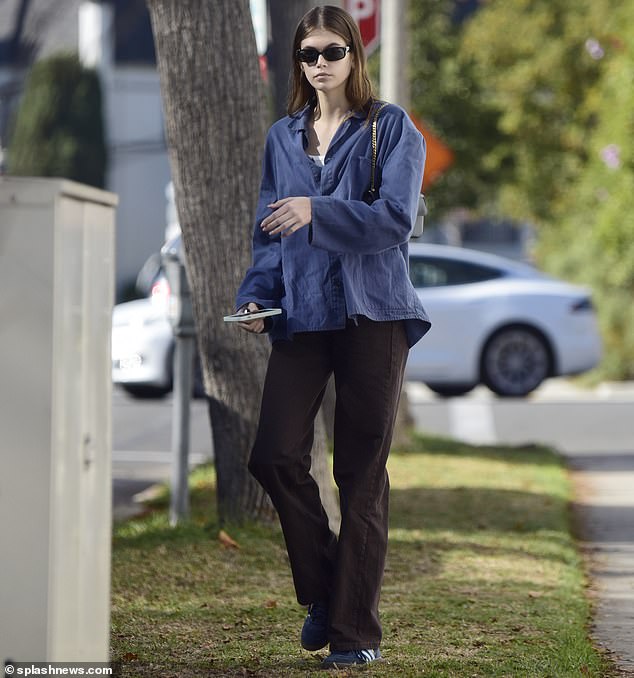 Quiet outing: The model turned actress was pictured wearing a loose-fitting button-up along with a pair of brown pants

A sleek black purse with a gold chain was slung over her left shoulder, and she was seen carrying her phone in her hand.

Kaia simply accessorized her daytime ensemble with a pair of black, chic sunglasses to protect her eyes from the bright, California sun.

Her skin glowed with her little to no makeup look as she enjoyed a quiet outing after walking the runway for the French luxury brand, Celine, earlier Thursday evening.

The fashion house put on a show at The Wiltern in Los Angeles to showcase the upcoming Fall/Winter 2023 pieces.

As she modeled a few looks and closed out the show, Kaia was supported by her close family and friends as they attended the star-studded event. 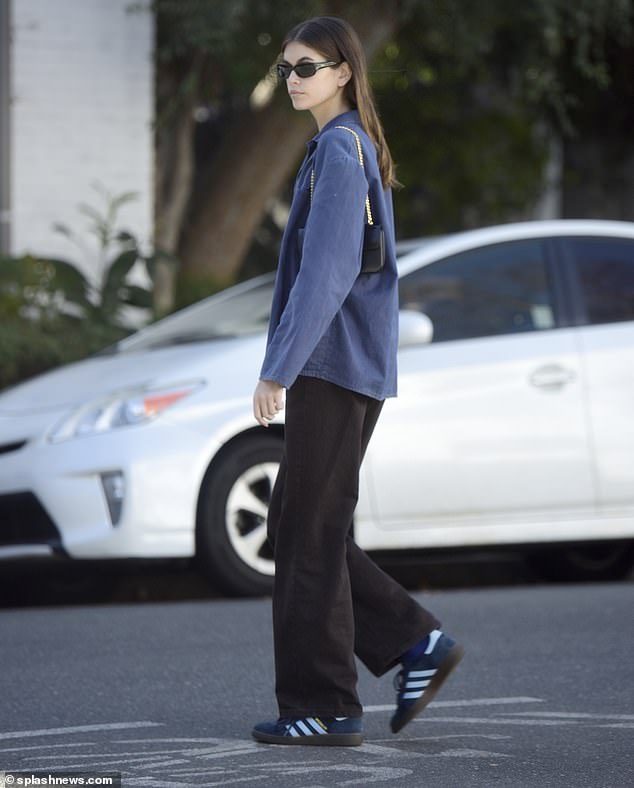 Relaxing afternoon: The star enjoyed a peaceful outing after walking the runway on Thursday night for the French brand, Celine, in LA 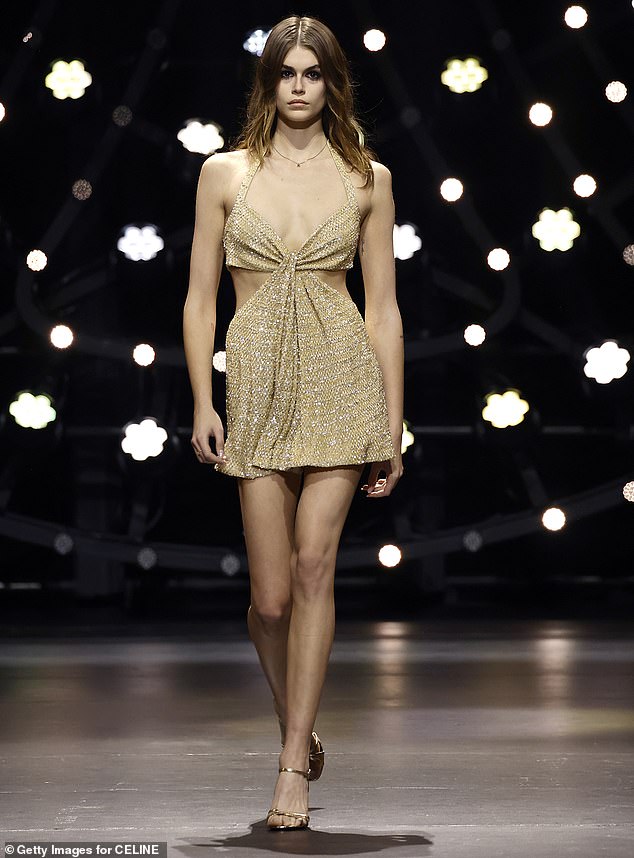 Beautiful: Kaia was seen modeling a shimmering, gold dress with cutouts as she strutted the runway for the brand’s Fall/Winter 2023 collection

The Vogue model put on a leggy display in a haltered, gold dress with cutouts on the side and slipped into gold, strappy heels as she walked down the catwalk.

For another look, the talented star donned skintight leather pants, a plain white cropped top, and a black blazer. She added black shades and a large, leather bag was cradled in the crook of her elbow. 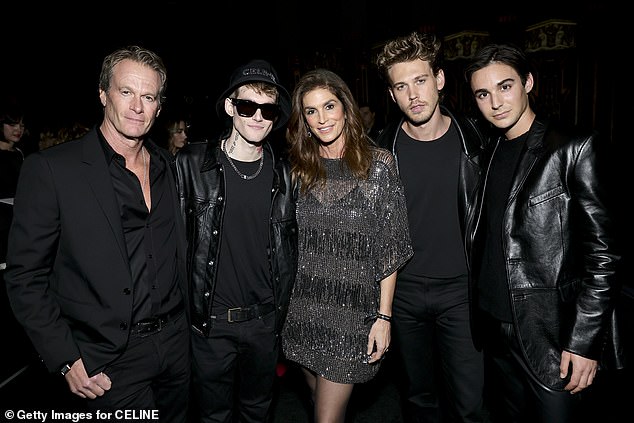 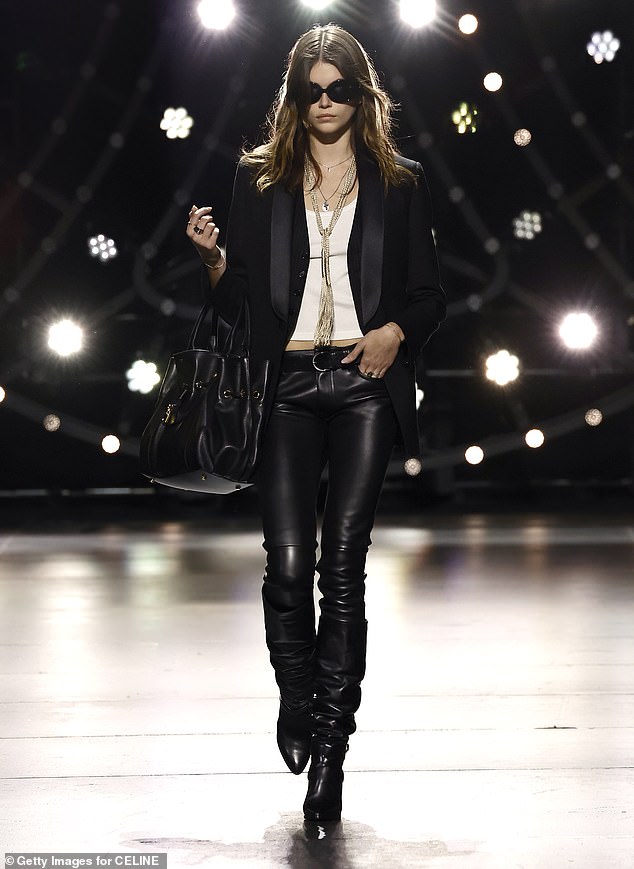 The catwalk: The model and actress was in her element as she strutted down the runway modeling various ensembles for Celine

After watching Kaia walk the runway, Austin happily expressed to The Hollywood Reporter, ‘Tonight was the first time I’ve seen Kaia walk in a show so I was very, very proud. It was just wonderful.’

Cindy also had the chance to express how proud she was of being able to see her daughter in her element on the runway.

‘I don’t normally attend fashion shows too much these days but once in a while I do if Kaia is going to be in it or if I’m friends with the designer,’ the star told the publication.

She added that the creative director, Hedi Slimane, ‘is such an incredible talent and both of my kids, Kaia and Presley, have had the opportunity to work with him.’