Vice President Kamala Harris made a quick trip to Capitol Hill on Tuesday to preside over a short Senate session to approve more aid for Americans returning from Afghanistan.

But Harris did not answer questions, including on the fate of Americans still in Afghanistan, when she left the Capitol building.

The House already passed the Emergency Repatriation Assistance for Returning Americans Act, which means it goes to President Joe Biden’s desk for signature. The bill raised the funding from $1 million to $10 million.

Tuesday’s Senate session lasted about two minutes and was attended only by Harris and Democratic Sen. Ben Cardin of Maryland.

It’s rare for a vice president to preside over a pro forma session, which is what the Senate is in right now. Those sessions are usually presided over by a single, local senator and last only a few minutes.

But, in order for the legislation pass, two senators were needed – a senator had to make the motion and a presiding officer had to approve it. As vice president, Harris is president of the Senate and so can step in as presiding officer.

Harris volunteered to preside when a second senator was unavailable to join Cardin, who was scheduled to be the presiding officer on Tuesday.

‘My understanding is we couldn’t find another senator so she volunteered,’ Cardin told reporters on Capitol Hill.

‘They needed two senators on the floor and I’m not sure there’s another senator close by, so she said she would take care of it,’ he noted.

The bill passed by unanimous consent, meaning no senator objected to it. 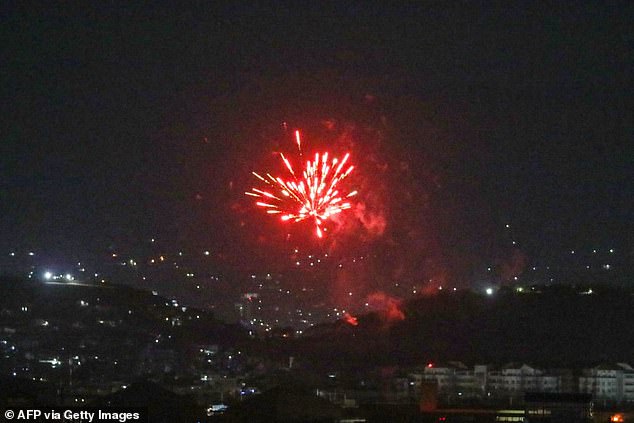 Celebrations in Kabul after the U.S. withdraw from Afghanistan

Secretary of State Anthony Blinken said on Monday evening there are between 100-200 Americans left in Afghanistan who want to leave.

‘We believe there are still a small number of Americans, under 200 and likely closer to 100, who remain in Afghanistan and want to leave,’ he said.

The Pentagon said Monday that more than 122,000 people, including 5,400 Americans, have been evacuated since July.

The United States ended its presence in Afghanistan on Monday, marking the end of a nearly 20 years in the country.

The final C-17, with the call sign MOOSE 88, lifted off from Hamid Karzai International Airport at 3:29 pm East Coast time, after the clock in Kabul clicked past midnight, making it August 31st there.