A Kansas police captain faces two misdemeanor charges after video emerged showing him pushing a 17-year-old girl who was refereeing a youth game.

Kevin Mears has been placed on unpaid leave and has been charged with battery and disorderly conduct, the Wichita Eagle reports.

Mears, who has led patrol bureaus within the Wichita Police Department, is due to appear on court on February 13.

Video uploaded to social media shows Mears getting into a verbal and physical altercation with referees at an Augusta youth basketball game on January 13.

He appears to take a male child, who apparently was hurt during the game, off the court and pushes a female referee.

Much yelling ensues and at one point the female referee can be clearly heard saying: ‘Get out!’

‘Get out of my way,’ Mears says at one point in the video. 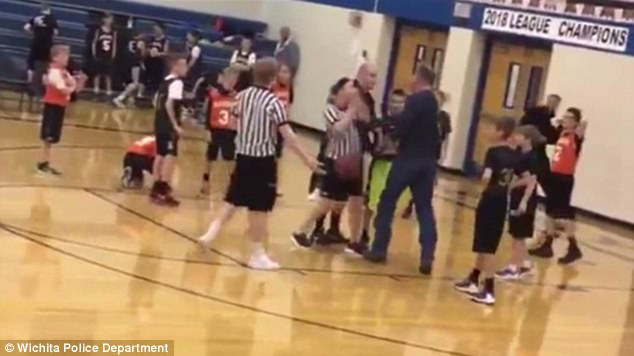 Video shows him going onto the court and pushing a female referee, 17. Much yelling ensues 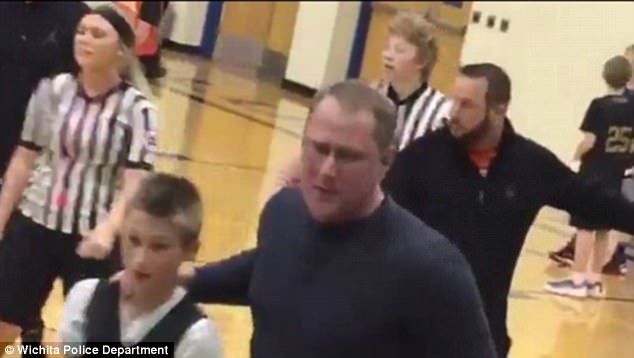 At one point the female referee can be clearly heard saying: ‘Get out!’ ‘Get out of my way,’ Mears says

The captain was off-duty at the time.

The Wichita Police Department said in a statement Monday that Mears ‘remains on unpaid leave pending the outcome of criminal proceedings and an internal review’.

City Prosecutor Benjamin Winters cautioned: ‘I would stress that at this point these charges are merely allegations, and Mr. Mears is presumed innocent until and unless proven guilty,’ KWCH reports.