Kim Kardashian was forced to change her holiday destination after learning that her ex Kanye West was planning to show up at the same place, it has been claimed.

Sources allege to Page Six that Kim, 41, and her boyfriend Pete Davidson were meant to holiday in the Dominic Republic, but switched it to the Bahamas after she learned Kanye was going to try and join them.

The 44-year-old rapper is even said to have gone to Miami for New Year’s Eve specifically because he expected Kim to be there.

The way they were: Kanye West is allegedly still trying to reunite with his estranged wife Kim Kardashian, who filed for divorce nearly a year ago; pictured at the 2019 Met Gala

‘Kim had planned to go to Miami with Pete for New Year, but then Kanye was suddenly doing an impromptu show there,’ said a Page Six source.

‘Of course, he met his new girlfriend Julia Fox there, and he has made a big deal out of flaunting their new relationship.’

It has been claimed that Kim was planning to travel with Pete to the Dominican Republic for a holiday after his Miami gig, but allegedly changed her plans when she found out Kanye was also headed there. 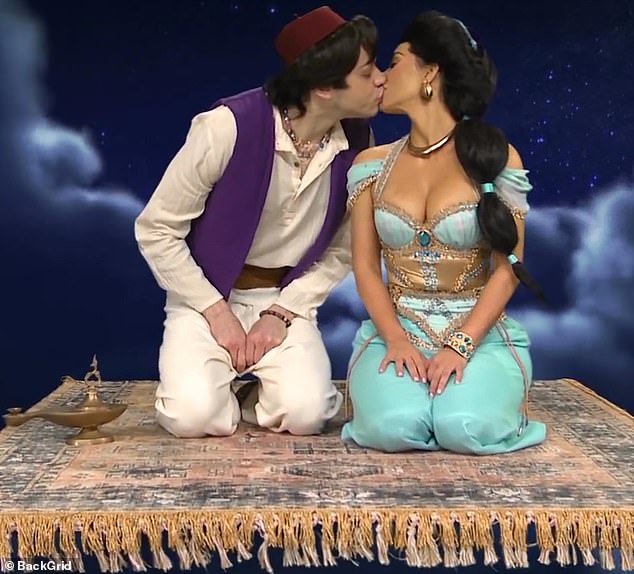 By the way: Kim is currently involved with Saturday Night Live lothario Pete Davidson with whom she is pictured on the sketch show in October

As a result Kim spent New Year’s with her and Kanye’s children back home in California and allegedly switched her holiday with Pete to the Bahamas.

Since their separation Kim has managed to keep the couple’s marital home in Hidden Hills – but last month, two weeks after she filed to be declared legally single, Kanye bought a $4.5 million house across the street from her.

Kanye is said to have paid $421,000 more than the asking price on his new house to make absolutely certain nobody outbid him. 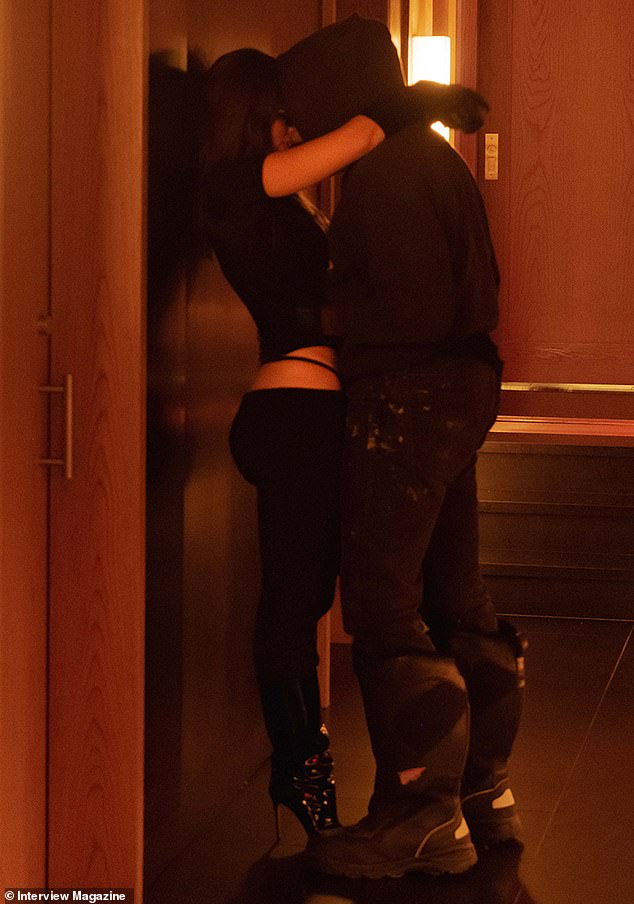 Wow: In recent weeks he has been seen on dates with Julia Fox, with whom he staged a widely-mocked raunchy photo-shoot in Interview magazine

A Page Six source has said Kim ‘was none too happy when Kanye bought a house across the road from her in Hidden Hills.’

In recent weeks he has been seen on dates with Julia Fox, with whom he staged a widely-mocked raunchy photo-shoot in Interview magazine. 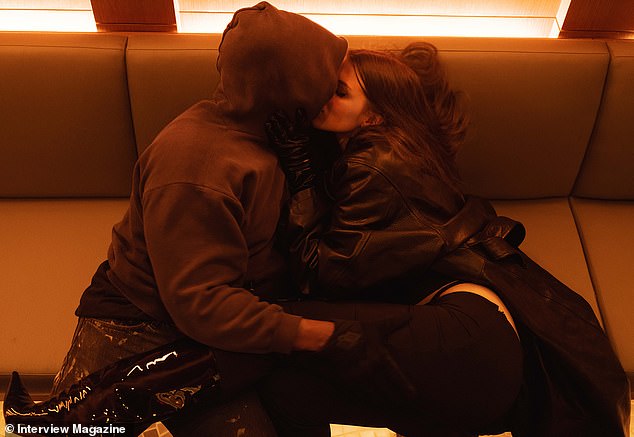 Incidentally: Julia, who became an It Girl in New York through her role in Uncut Gems, had been on just two dates with him before the photo-shoot

The pictures showed them kissing passionately and rolling around together on the floor and were accompanied by an essay Julia wrote about their romance.

Julia, who became an It Girl in New York through her role in Uncut Gems, had been on just two dates with him before the photo-shoot.

‘I met Ye in Miami on New Year’s Eve and it was an instant connection. His energy is so fun to be around,’ she spilled.

She gushed that he surprised her with a hotel suite full of clothes, which was ‘every girl’s dream come true’ and ‘felt like a real Cinderella moment.’ 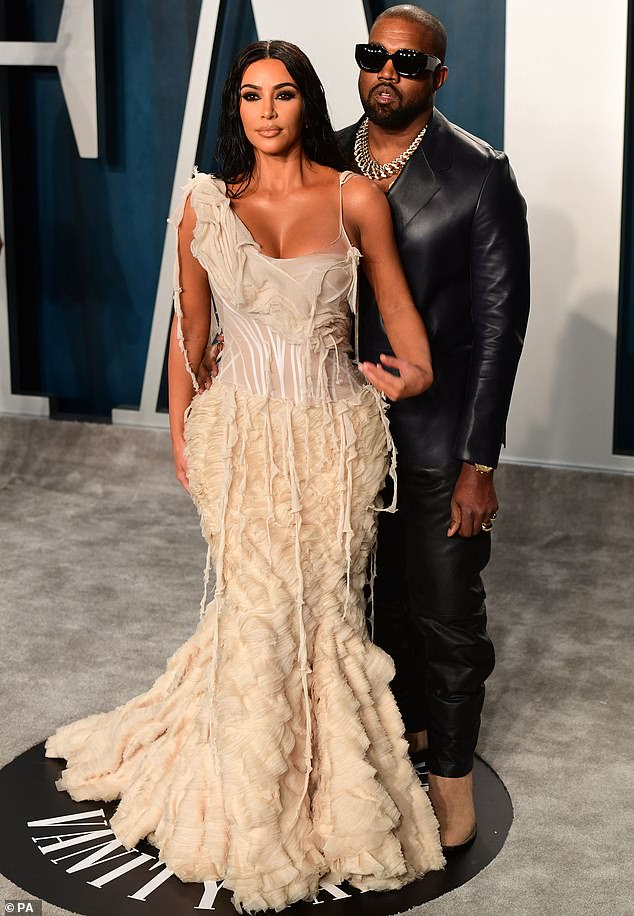 Mixed messaging: Kanye has made numerous public statements urging Kim to repair their marriage; they are pictured at the 2020 Vanity Fair Oscar Party

A Page Six source dismissed the Julia romance as ‘a desperate play for attention’ on Kanye’s part, saying: ‘He publicly fights for his family back, and then he’s linked to all these different girls. It’s very strange.’

Another source said: ‘Kanye is back in angry mode. He has gone back to telling Kim not to call him directly, but to call his security to make arrangements for the kids.’

Kanye has made numerous public statements urging Kim to repair their marriage, including in lyrics written for his new album Donda.

In one song he pleaded with her to ‘come back’ to him and in another he goaded her that ‘you’re still in love with me.’ 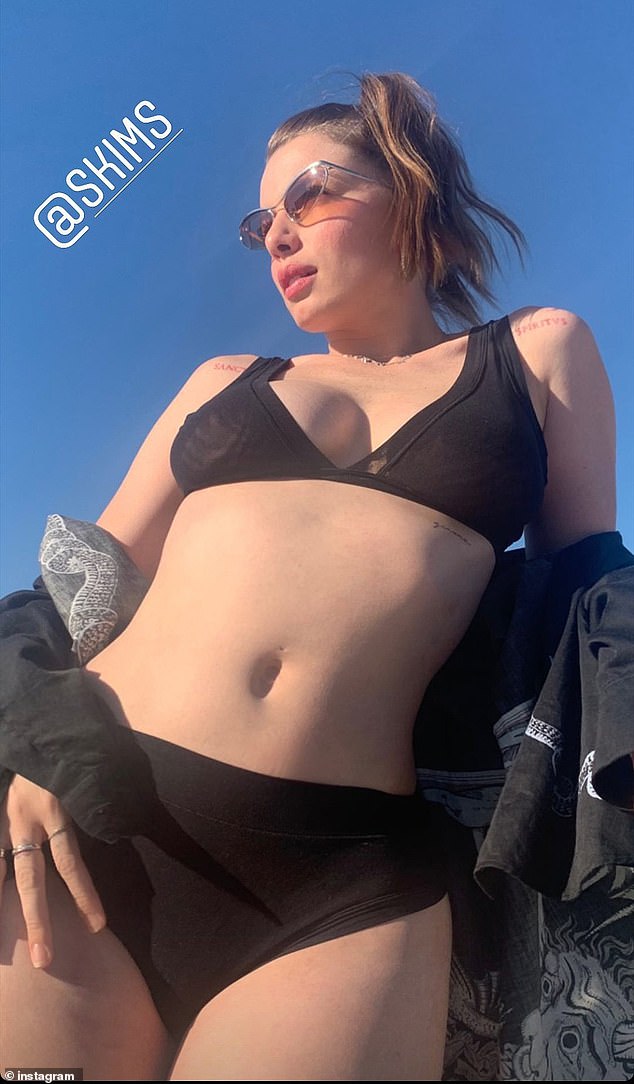 She has a Kim K look: Fox is seen here in an older photo modeling Kim’s SKIMS

During a Los Angeles Mission event to feed the needy on Skid Row the day before Thanksgiving, he allegedly gave a speech about his collapsing marriage.

Kanye, who has cut multiple religious albums, said God wanted him and Kim to patch up the marriage, according to Page Six.

‘The narrative God wants is to see that we can be redeemed in all these relationships. We’ve made mistakes,’ he allegedly said.

‘I’ve made mistakes. I’ve publicly done things that were not acceptable as a husband, but right now today, for whatever reason – I didn’t know I was going to be in front of this mic – but I’m here to change the narrative.’ 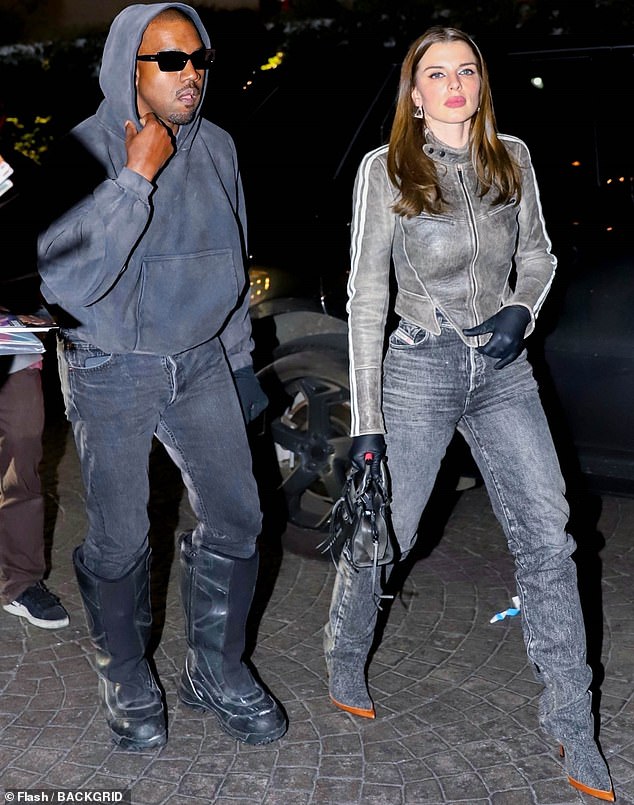 On the town: Kanye and Julia are pictured this Monday heading to a dinner date at the celebrity hot spot Craig’s in West Hollywood