Karim Benzema has no concerns about playing alongside Olivier Giroud

Karim Benzema insists it will be just like old times when he meets up with Olivier Giroud and the France squad for Euro 2020 preparations – despite his recent comments.

The Real Madrid striker has seen his six-year exile from Les Bleus squad ended by Didier Deschamps after he was ignored for selection following the infamous sex-tape blackmail scandal involving team-mate Mathieu Valbuena.

During his absence, Benzema attacked the ability of those chosen ahead of him for national team duty, including Giroud, about whom he said: ‘You can’t confuse an F1 car with a go-kart and I’m being kind.’

Despite the comment, the 33-year-old insists that the French squad are ‘happy’ to see him return to the squad, and says there is no animosity between himself and the Chelsea striker.

Asked by L’Equipe if he expected a good reception on his return to the set-up, he said: ‘I think so, yes. I have been lucky to play with Raphael Varane at Madrid and he told me that everyone is waiting for me, that everyone is happy.

‘I don’t have any worries about my integration. I am sure that it will go super well when it comes. 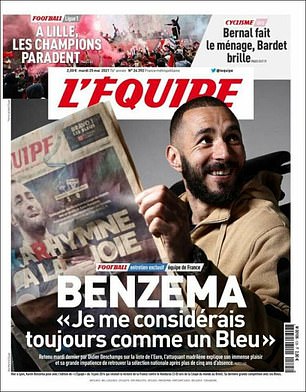 When asked specifically whether Giroud would be pleased to see him, Benzema followed up: ‘Of course. Olive, I saw him during the Chelsea match. We spoke, it was relaxed. He congratulated me for my goal. It was good vibes, it was cool.

‘I have already played with him, it will be the same as before.’

Having missed out on a spot in the World Cup winning squad, Benzema will be hoping to emulate his current Real Madrid boss by helping his side follow up success on the global stage by lifting the European Championship trophy.

Zinedine Zidane and Real endured a difficult season that ended with no silverware after they lost in the Champions League semis to Chelsea and failed to pip Atletico Madrid to the title on the final day.

Despite that failure, however, Benzema believes the 48-year-old will stay on at the Bernabeu.

‘Zizou, with me, has always been sincere,’ he said. ‘Close and very sincere. When it is going well, he tells me, but when it isn’t going well, he also tells me! 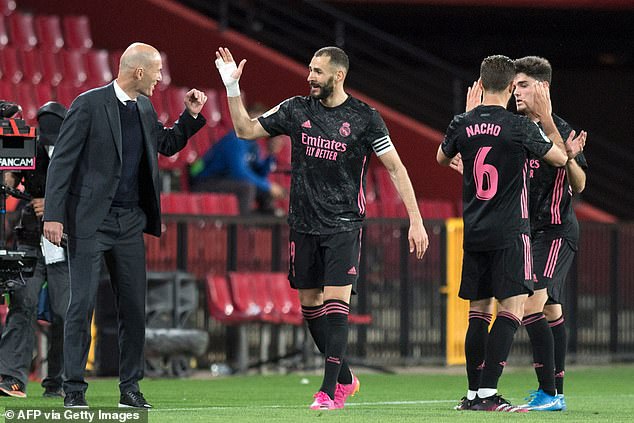 ‘Always, whether it be training or matches, he doesn’t beat around the bush. It’s for this reason that I respect him a lot. He is always very direct with me. He gives me a lot of confidence on the pitch. He’s my trainer, but he is like a big brother.

‘He’s always been supportive of me, whether I’m doing well or not, and he’s been constantly advancing me every year.

‘So far he’s still the Real Madrid manager, isn’t he? I don’t see him leaving. He’s not going to leave, you’ll see. If he leaves, he leaves … But right now, I can’t see Real without Zidane. ‘